Direct Numerical Simulation
of Turbulent Heat Transfer Across
a Mobile, Sheared Gas-Liquid
Interface
The impact of interfacial dynamics on turbulent heat transfer at a deformable, shearedgas-liquid interface is studied using Direct Numerical Simulation (DNS). The flow system comprises a gas and a liquid phase flowing in opposite directions. The governing equa-tions for the two fluids are alternately solved in separate domains and then coupled at the M. Fulgosi
interface by imposing continuity of velocity and stress. The deformations of the interfacefall in the range of capillary waves of waveslope ak⫽0.01 (wave amplitude a times wavenumber k), and very small phase speed-to-friction velocity ratio, c/u . The influence of low-to-moderate molecular Prandtl numbers 共 Pr兲 on the transport in the immediatevicinity of the interface is examined for the gas phase, and results are compared to Institute of Energy Technology, existing wall-bounded flow data. The shear-based Reynolds number Re is 171 and Swiss Federal Institute of Technology, Prandtl numbers of 1, 5, and 10 were studied. The effects induced by changes in Pr in ETH-Zentrum/CLT, CH-8092 Zurich, both wall-bounded flow and over a gas-liquid interface were analyzed by comparing the relevant statistical flow properties, including the budgets for the temperature variance andthe turbulent heat fluxes. Overall, Pr was found to affect the results in very much the S. Banerjee
same way as in most of the available wall flow data. The intensity of the averaged normalheat flux at high Prandtl numbers is found to be slightly greater near the interface than at Department of Chemical Engineering, the wall. Similar to what is observed in wall flows, for Pr⫽1 the turbulent viscosity and University of California, diffusivity are found to asymptote with z⫹3, where z⫹ is the distance to the interface, and Santa Barbara, CA 93106, USA with z⫹n, where n⬎3 for Pr⫽5 and 10. This implies that the gas phase perceivesdeformable interfaces as impermeable walls for small amplitude waves with wavelengthsmuch larger than the diffusive sublayers. Moreover, high-frequency fluctuating fields areshown to play a minor role in transferring heat across the interface, with a markedfiltering effect of Pr. A new scaling law for the normalized heat transfer coefficient, K⫹has been derived with the help of the DNS data. This law, which could be used in therange of Pr⫽1 to 10 for similar flow conditions, suggests an approximate Pr⫺3/5 rela-tionship, lying between the Pr⫺1/2 dependence for free surfaces and the Pr⫺2/3 law forimmobile interfaces and much higher Prandtl numbers. A close inspection of the transferrates reveals a strong and consistent relationship between K⫹, the frequency of sweepsimpacting the interface, the interfacial velocity streaks, and the interfacial shear stress. Keywords: Heat Transfer, Turbulence, Two-Phase, Interface coefficient with the Reynolds and Prandtl/Schmidt numbers. Theprinciple consists in relating local mass transfer rates and scalar Most investigations dealing with turbulent heat and mass trans- fluxes to the properties of the fluctuating velocity field. The clas- fer have traditionally focused on simple configurations involving sical approach uses the analogy between diffusion of momentum rigid or flat surfaces. In practice, however, single-phase or two- and of a scalar quantity 共heat or mass兲, extending Fick's gradient phase flows may take place in the presence of boundaries which laws up to the turbulent regime, i.e., the scalar turbulent diffusiv- are neither flat nor rigid. In multi-phase flow systems involving ity, ␣t , is made proportional to the turbulent viscosity, ␯t . The immiscible fluids, the interface separating the fluids plays a role surface renewal theory 关3兴 has also been widely employed to pa- similar to that of an impermeable boundary. An example is the rametrize gas-liquid mass transfer rates. Its principle consists in exchanges between the atmosphere and the oceans taking place relating the mass transfer rate to the time between sweeps and across a continuously deforming interface. On a much smaller bursts (␶ren) impinging on the interface, assumed to be responsible scale, gas-liquid exchange mechanisms across deformable inter- for surface renewal, i.e., K⬅(D/␶ren)1/2, where D⫽␯/Pr refers to faces may be encountered in annular flows, falling liquid films, molecular diffusivity of heat 共or mass by simply replacing Pr with Sc, the Schmidt number兲.
Environmental studies on CO2 absorption by the oceans 关1,2兴 Heat and mass transfer at interfaces depends on the resistance have focused on the proper scaling of the averaged mass transfer of diffusive layers with thickness ␦ ⬃ O (0.01 mm) on the liquid O (1 mm) on the gas side. Accordingly the transport †To whom correspondence should be sent. E-mail: [email protected]; across both layers is controlled by fine-scale turbulence, so that Phone: ⫹4116324613 the transport mechanisms can be faithfully simulated only by the Contributed by the Heat Transfer Division for publication in the JOURNAL OF use of DNS. The complexity of the problems increases if the HEAT TRANSFER. Manuscript received by the Heat Transfer Division July 17, 2002;revision received June 18, 2003. Associate Editor: K. S. Ball.
interface is further sheared and free to deform, in which case an Journal of Heat Transfer
Copyright 2003 by ASME
DECEMBER 2003, Vol. 125 Õ 1129 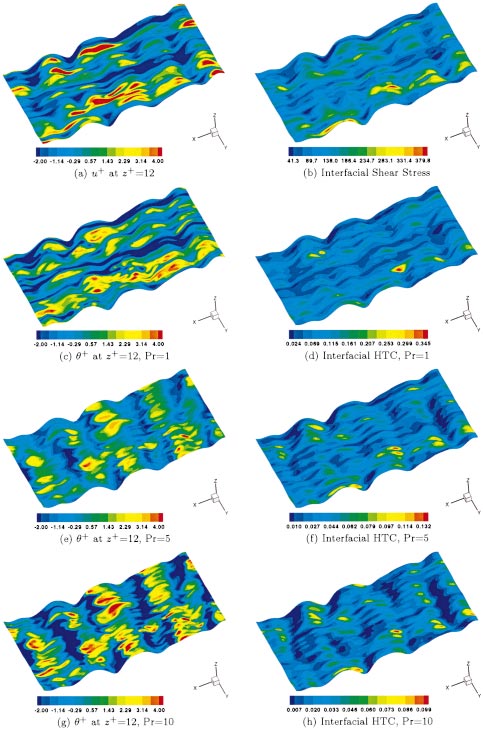 Your Health Reimbursement Arrangement (HRA) dollars may be able to be used to pay for co-payments, co-insurance, and deductibles. But that's not all. You may also be able to use your HRA money to pay for many expenses in the following categories: Medical, Dental Care, Eye Care, and Over-the-Counter (OTC) medications. Eligible items can vary by employer, so check the specifics of your particular HRA plan.