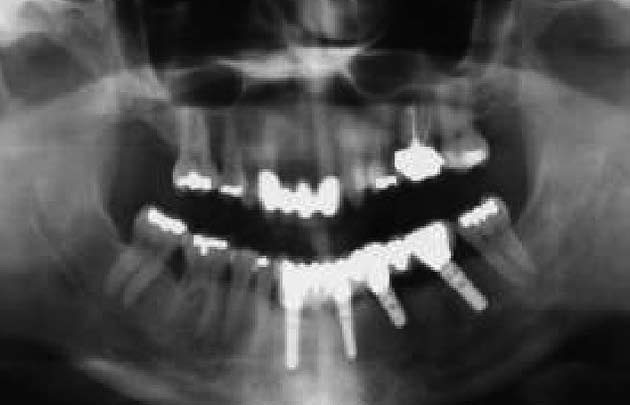 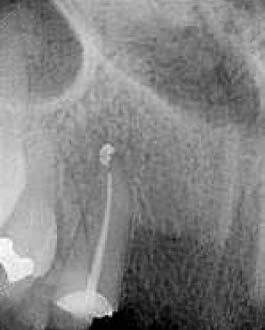 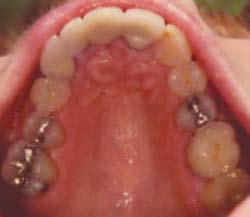 Practice Management and Human Relations Ethical decision-making
a composite resin restoration, an amalgam restoration, a porcelain inlay, a resin inlay, or a gold inlay). Finally, the dentist selects the appropriate treatment option by answering the questions "What should be done?" and "Why should it be done?" Although it is inherent in the process, perhaps a fourth step should be added: to arrive at a treatment option that is acceptable to both the patient and the dentist. Autonomy, or the patient's decision about treatment, is an important This article presents four case reports that illustrate how ethical Fig. 1. A 45-year-old woman with a loose maxil ary anterior FPD from teeth No. 6–9.
principles were applied in the deci- sion-making process to determine the most appropriate treatment. The authors acknowledge that the treatment rendered is not consid- ered to be ideal in these situations according to accepted standards. However, in each case, ideal treat- ment options were presented as part of the informed consent process. Weinstein's model was used to guide Case report No. 1
A 45-year-old woman sought treat-
ment for a failing four-unit fixed Fig. 2. A radiograph and occlusal view of the patient, indicating the recurrent caries that caused partial denture (FPD) that had the existing FPD abutment to fail. The cavosurface of the healthy tooth after excavation is at the been placed more than ten years osseous crest.
earlier (from teeth No. 6–9). She had recurring dental caries under the distal abutment crown that was inaccessible for repair without removing the FPD (Fig. 1). The contraindication to dental surgery. lengthening surgery, individual right maxillary canine abutment The patient wanted to receive the abutment crown therapy for teeth was mobile and fractured at the least costly restoration as quickly as No. 6 and 9, and removable partial gingival margin (Fig. 2); in addi- possible. The function, esthetics, denture (RPD) therapy. A second tion, the patient had an Angle's and durability of her previous FPD option involved the aforementioned Class I occlusion with stable centric were acceptable to her. She was endodontic therapy and crown- occlusion and anterior guidance. opposed to any type of removable lengthening surgery plus FPD The patient had received a nine- therapy, utilizing teeth No. 6 and 9 unit, four implant-supported FPD Based on the patient's wishes, three as abutments. A third option would (from teeth No. 19–27) more treatment options were available. involve extracting the right canine than a year earlier; it was in good One option involved endodontic and placing implants in the sites of condition. Medically, there was no therapy on the right canine, crown- teeth No. 6 and 8, with an implant- 540 September/October 2008 General Dentistry www.agd.org 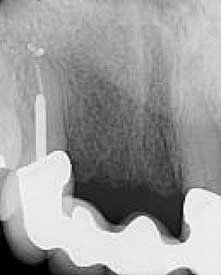 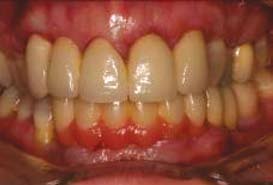 that have improved the feasibility of fixed prostheses and in an era that places a high value on esthetics. The costs associated with complex restoration of severely compromised teeth, the associated morbidity, and the unfavorable comparative prognoses suggest a need to consider utilizing dental implant therapy and/or FPD therapy as alternatives. The decision should be based on the Fig. 3. The patient in Figure 2 after receiving appropriate endodontic therapy and phased FPD patient's medical history and socio- therapy. Note the favorable tissue response and esthetic appearance created by wel -developed economic status, as well as proper ethical principles. Ethical considerations
Autonomy
The patient was presented with all
supported FPD and an independent and a full-coverage restoration possible treatment options, includ- crown on tooth No. 9. After thor- subsequent to endodontic therapy. ing the option to do nothing with ough discussion, the patient chose For adequate retention, it generally her failing FPD. As with all of the the second of the three plans.
is understood that the final crown cases presented in this article, the The existing FPD was removed, margin should be at least 2.0 mm patient was well-educated through endodontic therapy was completed apical to the cavosurface margin of discussion and commercially on tooth No. 6, and a pre-fabricated the core, creating a ferrule. This prepared video presentations. In post and a bonded resin core were complex approach to restoration is addition, she had received implant placed. A provisional FPD was technique-sensitive and the progno- therapy on her mandibular arch fabricated and crown-lengthening sis for the tooth as an abutment for previously without complication.
surgery was completed from teeth No. 6–11. After ten weeks of tissue For healthy biologic width, there healing, a porcelain-fused-to-high must be adequate space between the The patient had been treated previ- noble metal FPD was fabricated crown margin and the crestal bone. ously with a very functional and and luted with resin-reinforced glass Osseous crown-lengthening surgery esthetic FPD. FPD therapy has ionomer cement (Fig. 3). is indicated when coronal tooth been utilized for many years in The patient had enjoyed acceptable structure loss is significant enough to conventional dentistry and there success with her previous four- compromise the biologic width when was no absolute contraindication unit FPD and understood that an an ideal restoration is placed. This for FPD therapy, since the abut- implant-supported prosthesis would procedure is a subtractive approach ment teeth were prepared and provide the best longevity and that that requires removing bone in an would have required crown therapy crown-lengthening surgery is a sub- era when efforts are conscientiously regardless of the therapy selected. tractive therapy rather than additive. being made to provide additive treat- The risks of crown-lengthening ments that regenerate bone.
surgery (and the fact that bone Dental considerations of
When a tooth is severely com- would need to be removed) were promised, an alternative to the discussed thoroughly. The patient Periodontally sound teeth that aforementioned therapy would be clearly understood her condition have endured severe structural to extract the tooth and replace it and made an educated choice. The loss (that is, more than 50% of with either an RPD or an implant- same clinicians who completed the the coronal tooth structure) and supported prosthesis. Although previous implant therapy and pros- still are deemed restorable usually RPDs once were common practice, thesis presented and performed this require either a prefabricated or they have fallen out of favor in light particular treatment, so the patient laboratory-made post and core of modern materials and techniques was not subjected to outside bias.
www.agd.org General Dentistry September/October 2008 541 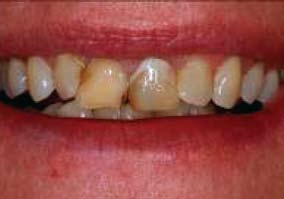