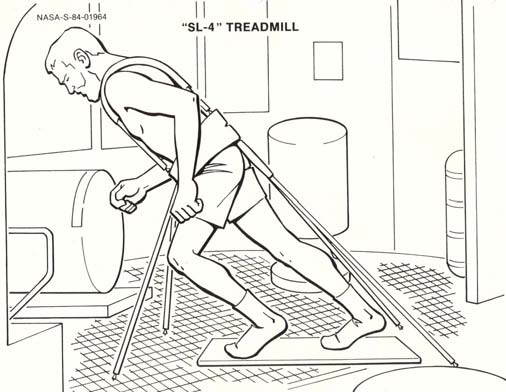 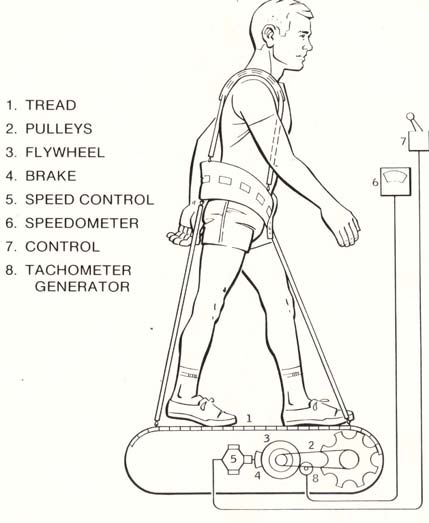 P.R. Cavanagh - Preventing Bone Loss in Space Cosmonauts on Mir have been said to perform exercise "up to 3 hours per day" (Nicogossian et al., 1994), while others believe that the exercise was 2-3 hours on 3 of 4 days (LeBlanc et al., 2000). The passive treadmill was considered the "stadium" from which exercise was performed. While the subject was tethered in place using bungees, he not only walked and ran, but also performed calisthenics and upper-body exercises using additional bungee cords for resistance (Figure 3). The data from LeBlanc et al. (2000) showed clearly that this protocol, even if faithfully performed, is not an effective countermeasure for bone loss. The exercise facilities available on the ISS through Expedition 12 consist of a Treadmill Vibration Isolation and Stabilization System (TVIS; Figure 2c; McCrory et Figure 2a: A Teflon® plate on which Skylab astronauts
al., 1999), a cycle ergometer with vibration isolation exercised in an unusual form of locomotion (Thornton and (CEVIS; Figure 2d), and the Interim Resistive Exercise Rummel, 1977; Thornton, 1989a). Artwork courtesy of NASA. Device (iRED; Figure 2e; Schneider et al., 2003). There is also a bicycle ergometer available in the Russian Thornton is thought to be the first man to run around the segment. None of these devices has a force measurement world in low Earth orbit. This feat was performed during capability, and there is very little published information one complete orbit of STS-8 (1983) on a treadmill that about their performance characteristics. When running on Thornton helped to design. Because the mid-deck of the the treadmill, a subject must be tethered using a subject Space Shuttle was not particularly spacious, the passive load device (SLD) to restrain him on the treadmill treadmill had to be stowable in a locker, a fact that surface, and, optionally, a subject position device (SPD) severely limited its belt length (Figure 2b). The subject is used to keep the subject in an area of the treadmill was tethered by bungee cords, which applied an unknown where a pitch oscillation of the treadmill will not be tension to return the crew member to the treadmill initiated. Each crew member is assigned a period of 2.25- surface. Kinematic analysis of on-orbit film taken during 2.5 hours every day for exercise—including set-up and running on the treadmill (Thornton et al., 1998) indicated break-down time, which can consume more than 50% of that there was restricted range of motion at the lower- the assigned period. The work of Lang et al. (2004) extremity joints and a plantar-flexed "tip-toe" gait. No showed that these devices as they are presently used are measurements of the foot forces were made. not effective as a countermeasure for bone loss during long-duration flights. As we shall discuss below, prolonged bed rest is considered to be a viable analog of space flight. Shackelford et al. (2004) conducted a program of vigorous resistance training (averaging 74% of one repetition maximum) in nine individuals during a 17-week confinement. The exercise was found to have a beneficial effect on BMD during bed rest compared to controls, specifically in the lumbar spine (+3% vs. -1%), total hip (+1% vs. -3%), heel (+1% vs. -3%), total body (0% vs. -1%), and pelvis (-0.5% vs. -3%). However, the high levels of load imposed on the muscle groups studied have never been achieved in space, and it is unlikely that in-flight exercise devices currently in use will permit such loads to be achieved. Figure 2b: The passive Shuttle treadmill designed by
Astronaut-Physician William Thornton (Thornton, 1989c). 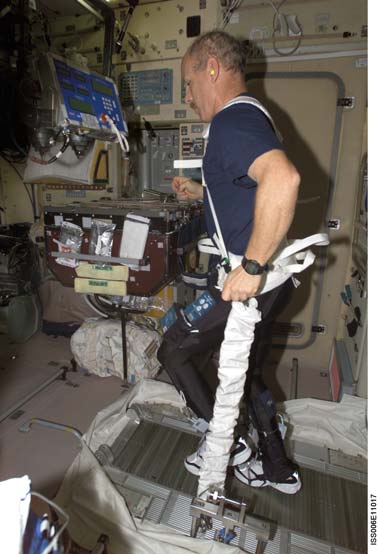 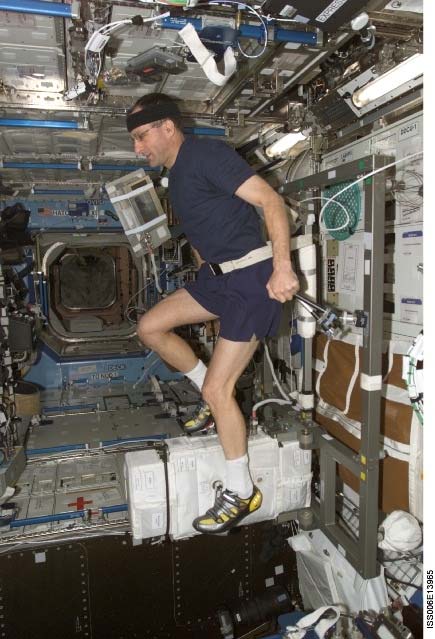 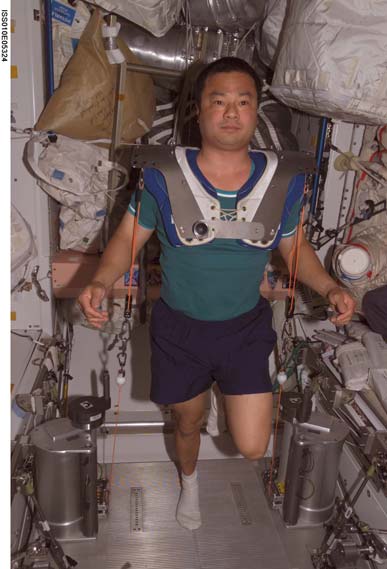 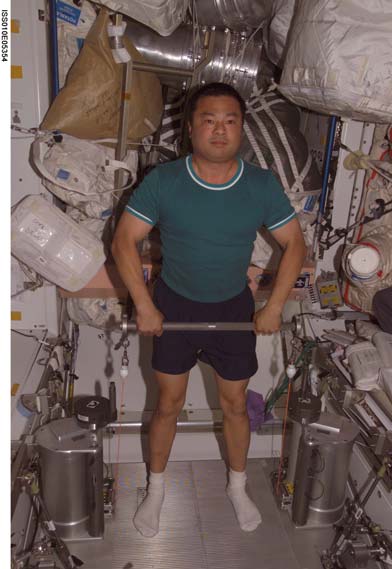 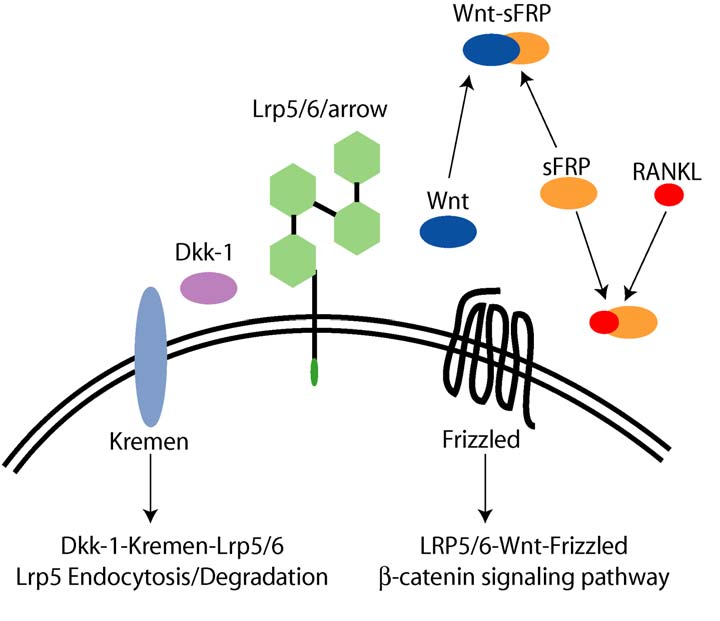