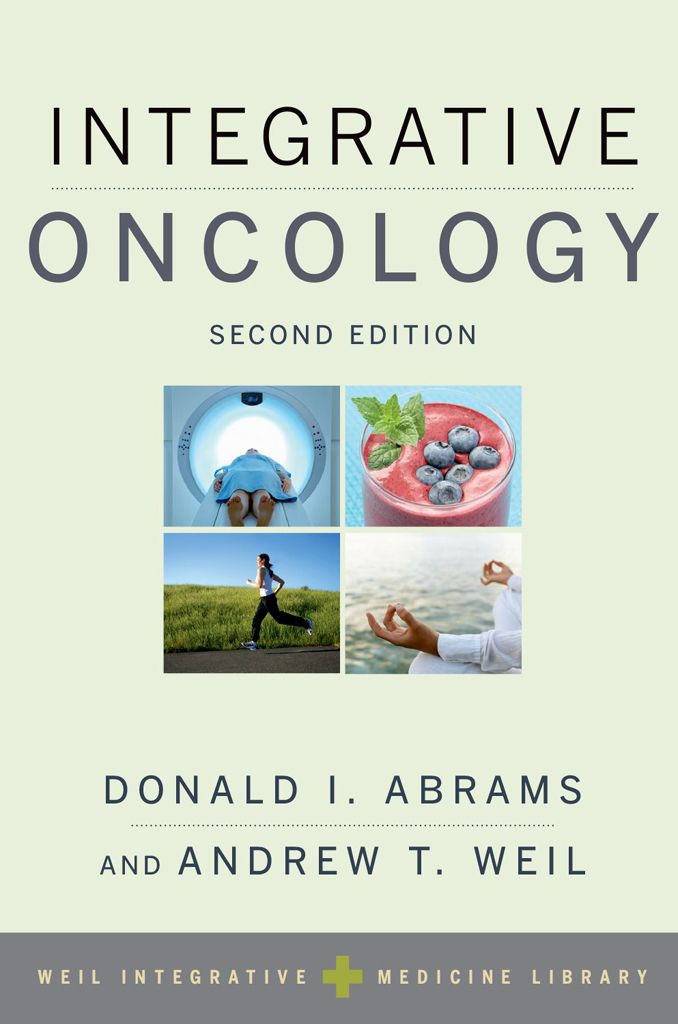 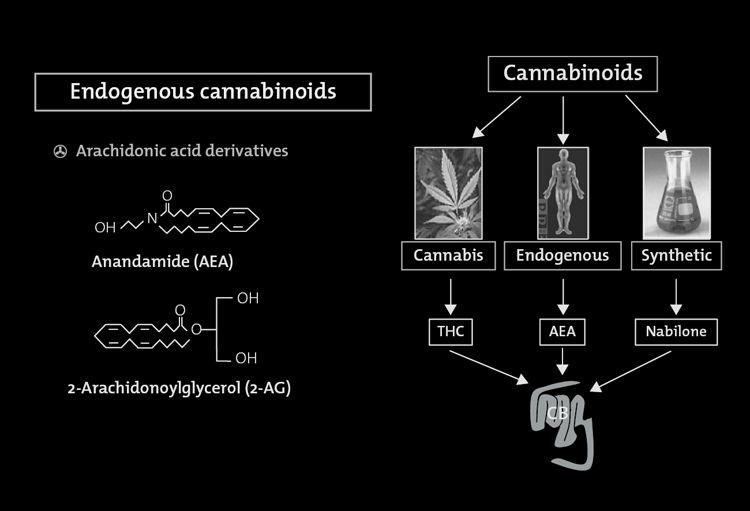 CB1, was pharmacologically identified in the brain in 1988. The CB1 receptor is coupled to Giproteins. Its engagement inhibits adenylyl cyclase and voltage-gated calcium channels, and stimulatesrectifying potassium conductances and mitogen-activated protein kinase activity. By 1990,investigators had cloned the CB1 receptor, identified its DNA sequence and mapped its location inthe brain, with the largest concentration being in the basal ganglia, cerebellum, hippocampus andcerebral cortex. Nowadays CB1 is known to be an ubiquitous protein that is present in basically allbody tissues. In 1993 a second cannabinoid receptor, CB2, was identified outside the brain.
Originally detected in macrophages and the marginal zone of the spleen, the highest concentration ofCB2 receptors is located on the B lymphocytes and natural killer cells, suggesting a possible role inimmunity.
The existence of cannabinoid receptors has subsequently been demonstrated in most animal species, all the way down to invertebrates. Are these receptors present in the body solely to complexwith ingested phytocannabinoids? The answer came in 1992 with the identification of a brainconstituent that binds to the cannabinoid receptor. Named anandamide from the Sanskrit word forbliss, the first endocannabinoid had been discovered. Subsequently 2- arachidonoylglycerol (2-AG)has also been confirmed as part of the body's endogenous cannabinoid system. Theseendocanabinoids function as neuromodulators. As the ligands for the 7-transmembrane domaincannabinoid receptors located in presynaptic nerve terminals, binding of the endocannabinoid leadsto G-protein activation and the cascade of events transpires resulting in the opening of potassiumchannels which decreases cell firing and the closure of calcium channels which decreasesneurotransmitter release . 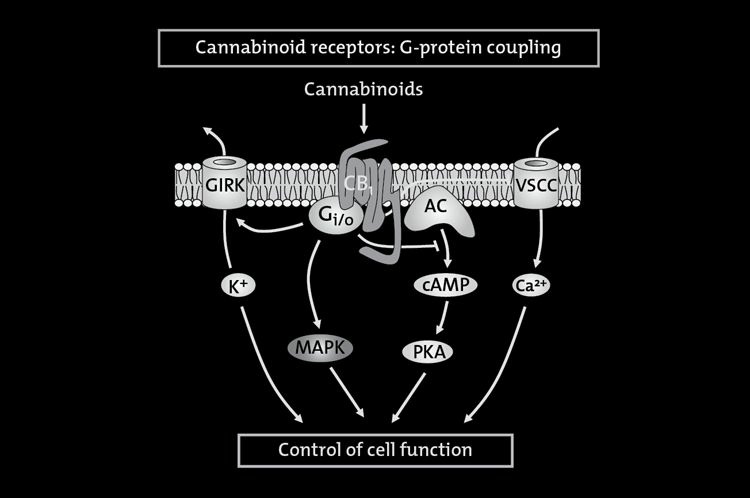 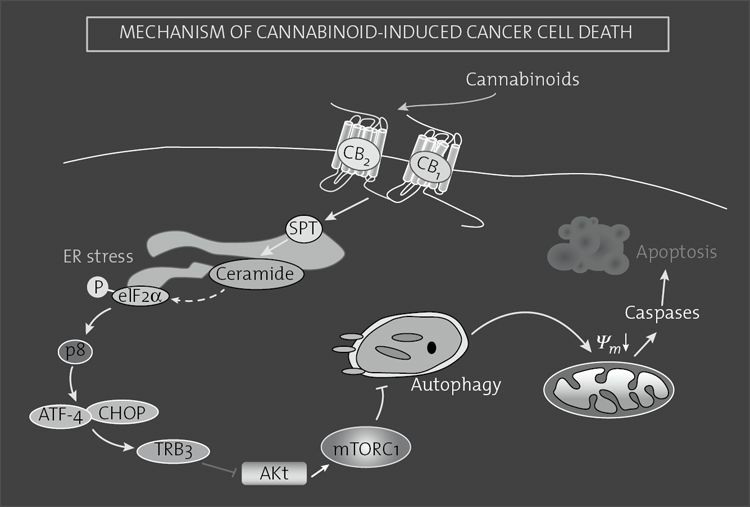 epidermal growth factor receptor, in which THC inhibits epidermal growth factor-induced growth,chemotaxis, and chemoinvasion (. In an in vivo model using severecombined immunodeficient mice, subcutaneous tumors were generated by inoculating the animalswith the same cell lines. Tumor growth in THC-treated animals was inhibited by 60% compared withvehicle-treated controls. The inhibition was significant both regarding the subcutaneous xenograft aswell as the number and weight of lung metastases. Tumor specimens revealed antiproliferative andantiangiogenic effects of THC.
FIGURE 8.3. Mechanism of cannabinoid-induced cancer cell death.
Cannabinoid agonists bind to CB1 and/or CB2 receptors to stimulate de novo synthesis of ceramide via induction of the enzyme serinepalmitoyltransferase (SPT). This triggers the induction of an eIF2α-mediated endoplasmic reticulum (ER) stress response that promotesthe up-regulation of the transcription factor p8 and several of its downstream targets, including the transcription factors ATF-4 andCHOP and the pseudokinase TRB3. This favors the interaction of TRB3 with the prosurvival protein AKT, thus leading to the inhibitionof the AKT–mTORC1 axis and the subsequent induction of autophagy. Autophagy is upstream of intrinsic mitochondrial apoptosis in theprocess of cannabinoid-induced cell death.
Another potential anticancer and particularly antimetastasis mechanism for cannabinoids has been significant reductions in breast cancer cell proliferation and invasiveness in in vitro models andmetastases in mice. Reducing Id-1 expression with antisense technology is not a possible interventionin humans with breast cancer at this time, however. CBD has been demonstrated to down-regulate Id-1 expression in aggressive human breast cancer cells (McAllister, 2011). The investigators, 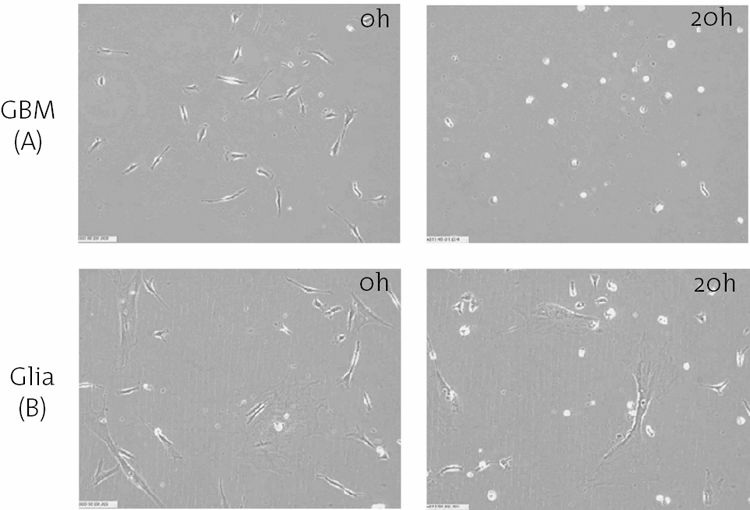 therefore, suggest that CBD represents the first nontoxic exogenous agent that can significantlydecrease Id-1 expression in metastatic breast cancer cells leading to the down-regulation of tumoraggressiveness in vitro.
FIGURE 8.4. Delta-9-THC kills brain tumor cells at a concentration that is nontoxic to normal brain cells. Images obtained through a
time-lapse microscope illustrate the selective induction of cell death in cultures of human glioblastoma multiforme (GBM) cells (A)
compared to normal human glial cells (B). After 20 hours of treatment, death of nearly all of the GBM cells is evidenced by cells
shrinking to inanimate white spheres. The normal cells exposed to the same concentration of delta-9-THC continue to migrate and divide.
(Photo courtesy of McAllister and Yount).
Two additional potential mechanisms of anticancer activity warrant brief mention. Cannabinoids, both plant-derived and endogenous, are believed to have anti-inflammatory effects. Inflammation isbeing increasingly linked to the development of various malignancies. Perhaps one of the mostobvious associations is the development of colorectal carcinoma in patients with inflammatory boweldisease. A mouse study has demonstrated that signaling of the endogenous cannabinoid system islikely to provide intrinsic protection against colonic inflammation (). This has ledto the development of a hypothesis that phytocannabinoids and endocannabinoids may be useful in theformation. Treatment with CBD 1 mg/kg decreased these azoxymethane effects. 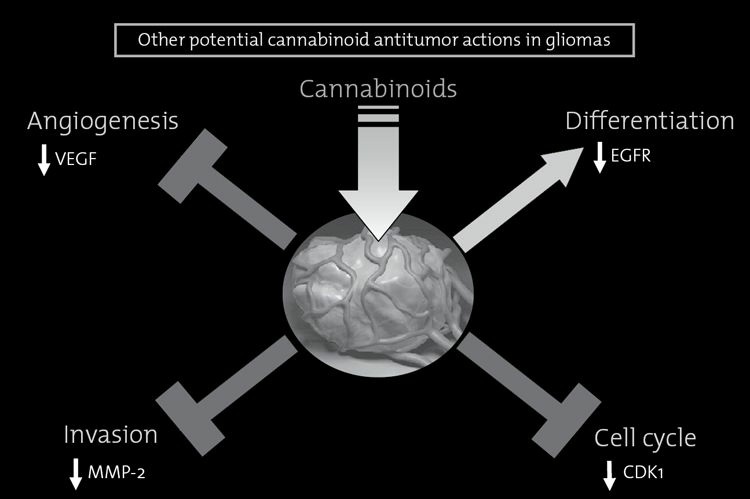 Asthma Policy Purpose To outline requirements for Asthma Scope All operational levels of Life Saving Victoria Policy Introduction Bronchial asthma or wheezy bronchitis, is a common condition within the community and may affect all groups from infancy to advanced old age. In its most severe form it requires hospitalisation in an Intensive Care Ward but in its milder form does not prevent sporting competition at the highest level. There are several examples of world and Olympic champions who have suffered asthma for years and whose case histories have been described in Medical Journals. There is considerable evidence that exercise is very helpful in the overall management of people with asthma1. A history of asthma by itself should be no deterrent to participation in any aquatic activity including teaching, being taught, examining, competing, or practical lifeguarding providing the lifeguard or student concerned is following the advice of a medical practitioner who is fully conversant with the implications of these activities. Asthma is a very variable condition and LSV recognises that a lifeguard with asthma may be fully fit at some times but not fit for various lifeguarding activities at other times. The responsibility for the

Airflow uniformity through perforated tiles in a raised-floor data center

Airflow Uniformity through Perforated Tiles in a Raised-Floor Data Center by James W. VanGilder, P.E., APC by Schneider Electric Roger R. Schmidt, Ph.D., P.E., IBM Corporation Executive summary Perforated tiles on a raised floor often deliver sub-stantially more or less airflow than expected, resulting in inefficiencies and even equipment failure due to inadequate cooling. In this paper, the impact of data center design parameters on perforated tile airflow is quantified and methods of improving airflow unifor-mity are discussed. This paper was written jointly by APC and IBM for the ASME InterPACK '05 conference.