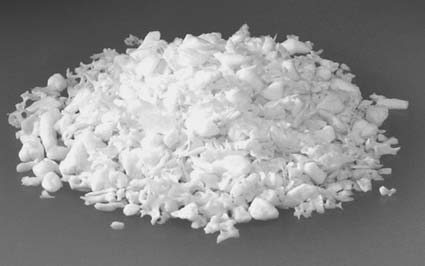 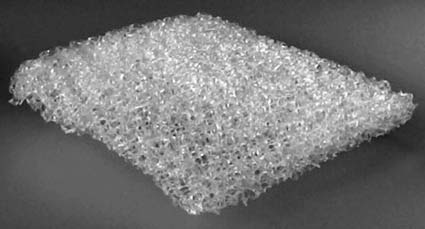 MAXILLARY SINUS LIFT THROUGH HETEROLOGOUS BONE GRAFTS Figure 2.—The heterologous (equine) enzyme-deanti-genated and demineralized (flexible) spongy layer Figure 1.—The 50%-50% mixture of heterologous (equine) (Osteoplant Flex, Bioteck), sized 25×25×3 mm.
enzyme-deantigenated cortical and spongy granules (Bio-Gen MIX, Bioteck).
enzymatic water-based solutions (37 °C, 1week). Such treatment allows achieving com-plete elimination of the organic componentaccording to the current ISO standard (ISO14493: 1991).
Bone sections used to get Bio-Gen blocks are then deprived of bone collagen through a Figure 3.—The heterologous (equine) enzyme-deanti- wet high-pressure process (120 °C, 7 Bars).
genated spongy blocks (Bio-Gen Blocks, Bioteck), sized Spongy blocks are finally cut according to the 10×10×10 or 10×10×20 mm, respectively.
desired size (10×10×10 mm or 10×10×20 mm). A
Granules are produced through mechanical etched dental implants. Finally, "TRE" grinding of cortical or spongy blocks. The implants are sterilized through 25 kGy granular mixture used in this study is a 50%- 50% commercial mixture of spongy and cor-tical granules, size from 0.5 to 1 mm. The flex-ible spongy layer, size 25×25×3 mm, instead, is achieved by partially demineralising a deanti- Presurgical preparation was performed genated block, still containing bone collagen, administering orally, as a systemic antibiotic through an electrolytic acidic process. 875 mg amoxicillin and 125 mg potassium Finally, all products are sterilized through clavulanate (Augmentin, Glaxo Smith Kline, 25 kGy Beta-rays irradiation.
Italy) on the evening before surgery. One MINER hour before surgery 2 mg diazepam were
administered orally (Valium 2, Roche, France) "TRE" type implants (Biotec Srl, Italy) as a sedative. The patient was then covered (Figure 4A) are acid-etched surface implants.
with sterile sheets and local anesthesia was face is acid-etched twice in order to performed with articaine (4%) and epineph- achieve homogeneous micro-holes, whose rine 1:100 000 (Citrocartin 100, Molteni, Italy). average size is about 2 µm (Figure 4B). This Surgery began with a slightly vestibular size is very close to values that were shown crestal incision of the keratinized mucosa, to prompt the initial attachment of about 1 cm long. Then some distal and mesial osteoblasts.25, 26 Implants are then polished incisions were performed and a whole thick- through plasma treatment, in order to achieve ness flap was detached. a clean, uncontaminated surface. The final The lateral wall of the maxillary bone was degree of surface cleanness corresponds to opened according to the "lateral window" the one of other marketed high-level acid- technique described by Tatum 4 and Boyne MINERVA CHIRURGICA 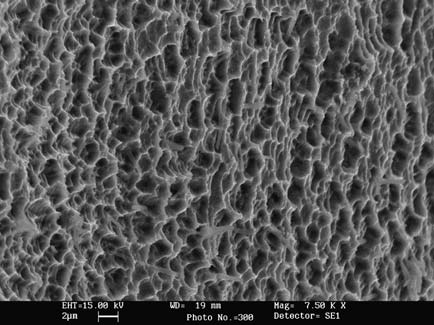 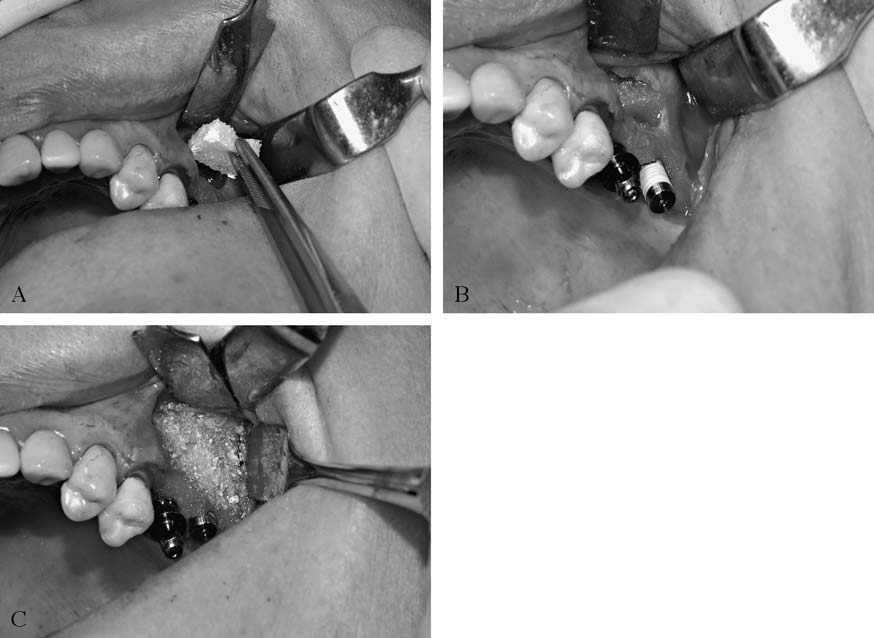 MAXILLARY SINUS LIFT THROUGH HETEROLOGOUS BONE GRAFTSTITOLO Figure 4.—A) The Biotec "TRE" implant (the 3.75×13 mm model is showed). B) Its acid-etched surface (SEM, 7 500×).
MINER Figure 5.—Sinus augmentation with granules and a flexible
spongy layer. A) The flexible layer is positioned to protectthe sinus membrane. B) Implants are placed. C) The cavi-ty is filled with granules.
and James.5 After opening an elliptical win- to create a roof for the cavity in which the dow sized approximately 8×12 mm, the sinus bone graft would be placed. membrane was detached using proper lifters When the mixture of heterologous spongy (SinusSet, Dentsply Friadent). The vestibu- and cortical granules and the spongy flexible lar window was then carefully moved layer granules were used (Figure 5), they towards the medial wall of the sinus in order were hydrated separately with physiological MINERVA CHIRURGICA

MAXILLARY SINUS LIFT THROUGH HETEROLOGOUS BONE GRAFTS Figure 6.—Sinus augmentation with spongy block. A) The block is placed into the cavity and held still with the pliers.
B) and C) Implants are placed, after drilling the ridge and the block together.
solution for 3-4 min. The spongy layer was days after surgery, twice a day (16 mg methyl- then shaped with sterile scissors and was prednisolone, Medrol, Pfizer, Usa). Patients inserted through the bone window while were also prescribed 20 mg piroxicam holding it bent with pliers. In this way, after (Brexin, Chiesi, Italy) for one day after insertion in the cavity, it opened inside it and sur MEDICA
gery, and they were advised to continue lifted and protected the Schneider membrane.
treatment on the following days only if need- The cavity was then partially filled with gran- ed. Patients were also advised to use a spray ules, and the ridge was drilled with the prop- A
V nasal decongestant (betamethasone 0.05g
er drills for implant placement. Implant(s) and chlorohydrate tetrahydrozoline 0.1 g, were placed and filling of the cavity with Biorinil, Farmila-thea Farmaceutici, Italy) if granules was completed. needed, in order to avoid nose blowing and In the alternative approach (Figure 6), the the possible consequent disturbance to the heterologous block was firstly hydrated for 3- grafted site.
4 min by soaking it in physiological solution, Sutures were removed after 10 days.
and then it was shaped with a blur to adapt Prosthetic rehabilitation followed after 8-9 it to the grafting site. It was then inserted in the cavity and, while holding it still with pli-ers, the ridge and the block were drilled together with the proper drill for implant MINER Patients were controlled once a month for
insertion. Then implant(s) were placed.
6 months and then every year up to 5 years, If necessary, a continuous periosteal inci- through clinical evaluation and panoramic sion was performed to connect the vertical, X-ray. Implant success or failure were mesial and distal incisions in order to release assessed through the Albrektsson and Zarb 27 totally the flap and to suture it with no ten- criteria (the outcome is successful if the sion. Suture was performed with vertical mat- implant is stable and unless bone resorption tress stitches, and single stitches (GoreTex, exceeds 1.5 mm in the first year or 0.2 mm in subsequent evaluations). The same antibiotic treatment previously described (Augmentin, Glaxo Smith Kline,Italy) was continued for 5 days after surgery, twice a day. Immediately after surgery thepatient was given a tablet of an anti-inflam- Outcome regarding group A and group B matory drug that was prescribed also for 4 are summarized in Tables I and II, respec- MINERVA CHIRURGICA MAXILLARY SINUS LIFT THROUGH HETEROLOGOUS BONE GRAFTS TABLE I.—Results - Group A (heterologous granules and spongy flexible layer). 3.75
3.75 MEDICA
TABLE II.—Results - Group B (bone blocks). MINER Diameter of Length of Failure (F)
MINERVA CHIRURGICA 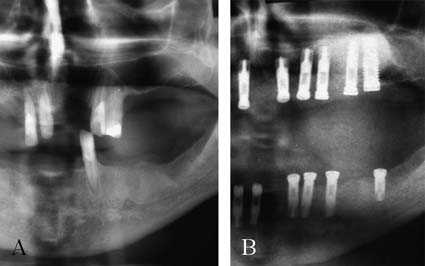