Analysis of carbohydrates and glycoconjugates by matrixassisted laser desorption/ionization mass spectrometry: an update for the period 20052006 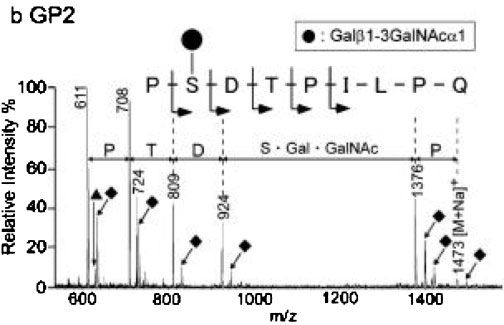 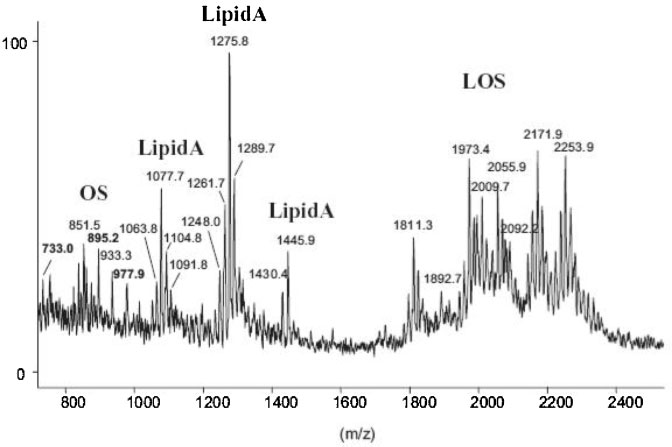 FIGURE 5. Negative ion MALDI-TOF mass spectrum of native R-type LPS from Pseudoalteromonasissachenkonii. From Sturiale et al. (2005b) with permission from John Wiley and Sons Ltd.
ceramide trihexoside (CTH, 46) in cardiac valves. Deuterated internal energy produced by atmospheric pressure MALDI have standards for quantification of several GSLs have been also been used to advantage to record spectra of intact ganglio- synthesized and evaluated by ESI MS (Mills et al., 2005).
sides without loss of the sialic acid (Zhang et al., 2005c).
Thin-layer chromatography (TLC) has been coupled Nakamura et al. (2006) have also coupled TLC to a MALDI-QIT- directly with a commercial orthogonal-MALDI-TOF instrument TOF instrument and used it to record MS2 and MS3 spectra of for the analysis of gangliosides (Ivleva et al., 2005). The matrix glycosphingolipids. Ions characteristic of both sugar and lipid was sinapinic acid, spotted onto the TLC plate after development portions were obtained. The matrix, DHB, was coated onto a of the plate. Application of a declustering potential during target in 1:1 acetonitrile/water and spectra were recorded from MALDI analysis allowed control of the matrix adducts and the regions that a parallel stained plate indicated contained clusters. Stabilization of these sialylated molecules was provid- sample. TLC plates directly stained with primuline also yielded ed by collisional cooling. Several investigators have developed spectra. Suzuki et al. (2006c) have reported that the use of lithium methods for stabilization of sialic acids in these compounds. A adducts, increased laser power and a cooling gas flow can method, reported by Dreisewerd et al. (2005) used the liquid increase the abundance of the fragment ions in this QIT system.
matrix, glycerol, with ionization involving an Er:Yag infrared Other studies on glycosphingolipids are listed in Table 12.
laser to provide soft ionization conditions. The ions of lower Mass Spectrometry Reviews DOI 10.1002/mas ANALYSIS OF CARBOHYDRATES AND GLYCOCONJUGATES 3. Mycobacterial Glycolipids Glucose monomycolate is synthesized by mycobacteria uponinfection. Enomoto et al. (2005) have shown up-regulation ofsynthesis at 308C. The compounds, with a variety of mycolicacids from Mycobacterium smegmatis were identified byMALDI-TOF–MS after isolation by TLC. Trehalose (3/39) is aprerequisite for the production of mycolates that are importantconstituents of mycobacterial cell walls. Corynebacteriumglutamicum, a mutant that is unable to synthesize trehalose is,nevertheless able to synthesize mycolates when grown on otherglucose-containing oligosaccharides. The compounds, analyzedby MALDI-TOF and NMR contained one mycolic acidchain attached to C6 of the reducing-terminal glucose (Tropiset al., 2005). Cord factor (trehalose-6,60-dimycolate) from ninespecies of mycobacteria has been successfully analyzed byMALDI-TOF–MS (Fujita et al., 2005c). Spectra were verycomplicated (Fig. 6) because of the heterogeneity in both mycolicacid chains.
E. Glycosides and Other Natural Products Much work on glycosides relies on ESI or FAB ionization withfewer applications involving MALDI–MS. However, the tech-nique is still valuable in this context as illustrated by the worksummarized in Tables 13 and 14.
X. GLYCOSYLATION AND OTHERREACTION MECHANISMS Work involving glycosidases and glycosyl-transferases whereMALDI–MS has mainly been used for product characterization,is summarized in Table 15. Freire, D'Alayer, and Bay (2006)have reported that SELDI-TOF is a very convenient analyticalmethod for monitoring bioconjugation reactions. The trans-glycosylation reaction of GlcNAc to a recombinant mucinprotein, MUC6, catalyzed by ppGalNAc transferases were used.
XI. INDUSTRIAL APPLICATIONS A. Biopharmaceuticals The growing trend towards the production of biopharmaceuticals has resulted in studies in a large range of organisms such as the legume Medicago truncatula that has recently been proposed,on the bases of MALDI-TOF analysis, as promising for theproduction of these pharmaceuticals (Abranches et al., 2005).
Some of these organisms produce non-human glycosylation which can be antigenic and much work has been reported on the use of genetic engineering to remove the enzymes responsible forbiosynthesis of antigenic glycans, predominantly those con- taining 1 ! 2-linked xylose and a-galactose, and to introduceenzymes that synthesize human-type glycosylation. Plant andinsect cells are frequently used as bioreactors and a review by Harrison and Jarvis (2006) addresses N-glycosylation inbaculovirus-insect expression systems and the engineering of Mass Spectrometry Reviews DOI 10.1002/mas