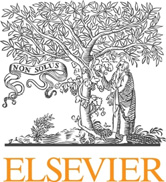 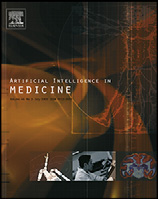 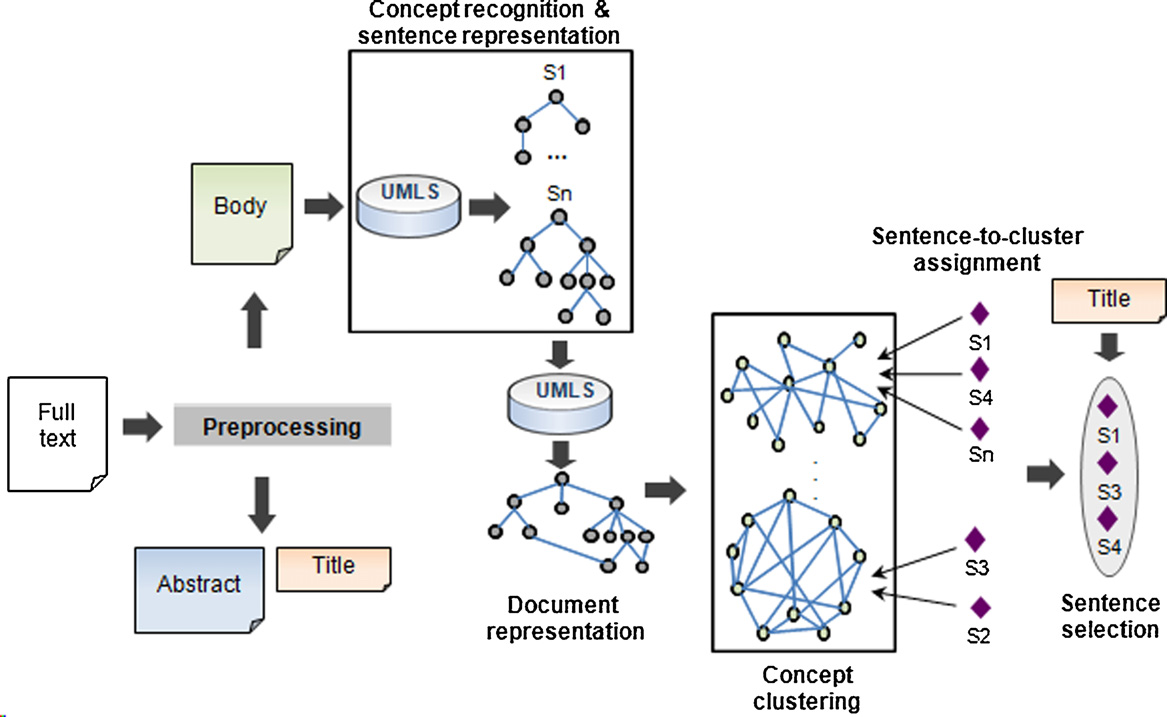 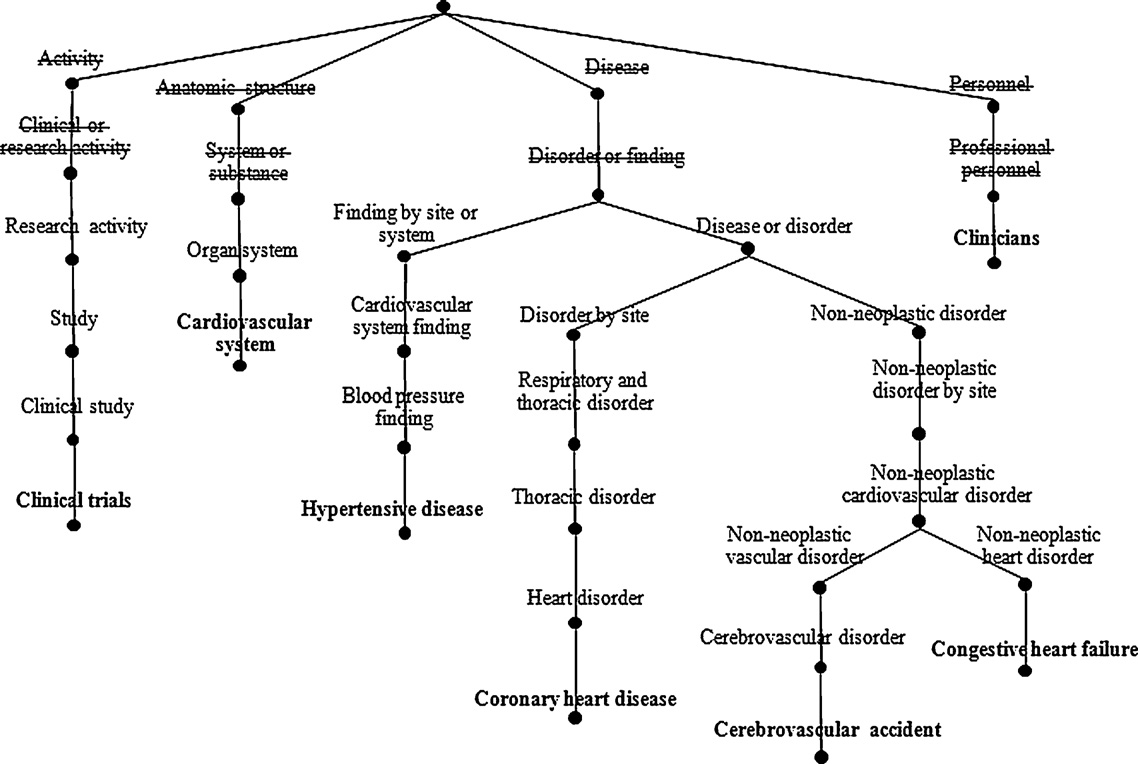 L. Plaza et al. / Artiﬁcial Intelligence in Medicine 53 (2011) 1–14 Fig. 3. An example of a sentence graph for the sentence The goal of the trial was to assess cardiovascular mortality and morbidity for stroke, coronary heart disease and congestive
heart failure, as an evidence-based guide for clinicians who treat hypertension. Very general concepts that are ignored appear crossed out. Final concepts are shown in bold type.
where the edges (temporally unlabelled) represent semantic rela- leaf vertices is always 1.0. Thus, the weighting function attaches tions, and only a single vertex is created for each distinct concept in greater importance to speciﬁc concepts than to general ones.
the text. Finally, the two upper levels of this hierarchy are removed, again because they represent very general concepts. i) if e represents an is a relation weight(vi, vj) =  where the graph for the example sentence used in the previous section.
 = 1.0 otherwise This principle is shown in the is a link between the 3.1.4. Document representation concepts cardiovascular drug and alpha-adrenergic blocking agent is Next, all the sentence graphs are merged into a single document assigned the weight 1/2 because cardiovascular drug is ranked ﬁrst graph. This graph can be extended using more speciﬁc relation- in its hierarchy and alpha-adrenergic blocking agent is ranked second ships between nodes to obtain a more complete representation of in the same hierarchy. The related to link between the leaf concepts the document. In particular, in this work, the following sets of rela- doxazosin and chlorthalidone is assigned the weight 1.0.
tions are tested: (1) no relation (apart from hypernymy), (2) the associated with relation between semantic types from the UMLS Semantic Network, (3) the related to relation between concepts 3.1.5. Concept clustering from the UMLS Metathesaurus and (4) both the associated with and The following step groups the UMLS concepts in the document related to relations. To expand the document graph, only relations graph using a degree-based clustering algorithm similar to the one that link leaf vertices are added.
proposed in aim is to construct sets or clusters of concepts an example of a document graph for a simpliﬁed that are closely related in meaning, under the assumption that each document composed of two sentences extracted from the docu- cluster represents a different subtheme in the document and that ment cvm-2-6-254.xml from the BioMed Central corpus: the most central concepts in the clusters (the centroids) give the necessary and sufﬁcient information related to each subtheme.
The working hypothesis is that the document graph is an S1. The goal of the trial was to assess cardiovascular mortality instance of a scale-free network A scale-free network is a and morbidity for stroke, coronary heart disease and conges- complex network whose degree distribution follows a power law tive heart failure, as an evidence-based guide for clinicians who P(k) ∼ k− , where k stands for the number of links originating from treat hypertension a given node. The most notable property in this type of networks S2. While event rates for fatal cardiovascular disease were similar, is that some nodes have a degree that considerably exceeds the there was a disturbing tendency for stroke to occur more often average. These highest-degree nodes are often called hubs.
in the doxazosin group, than in the group taking chlorthalidone.
The salience of each vertex in the graph is then computed. Fol- lowing salience of a vertex, vi, is deﬁned as the sum of the Next, each edge of the document graph is assigned a weight in weights of the edges, e that are connected to it, as shown in Eq.
[0,1], as shown in Eq. weight of an edge, e, representing an is a relation between two vertices, vi and vj (where vi is a parent of vj), is calculated as the ratio of the depth of vi to the depth of vj from salience(v = the root of their hierarchy. The weight of an edge representing any other relation (i.e., associated with or related to) between a pair of 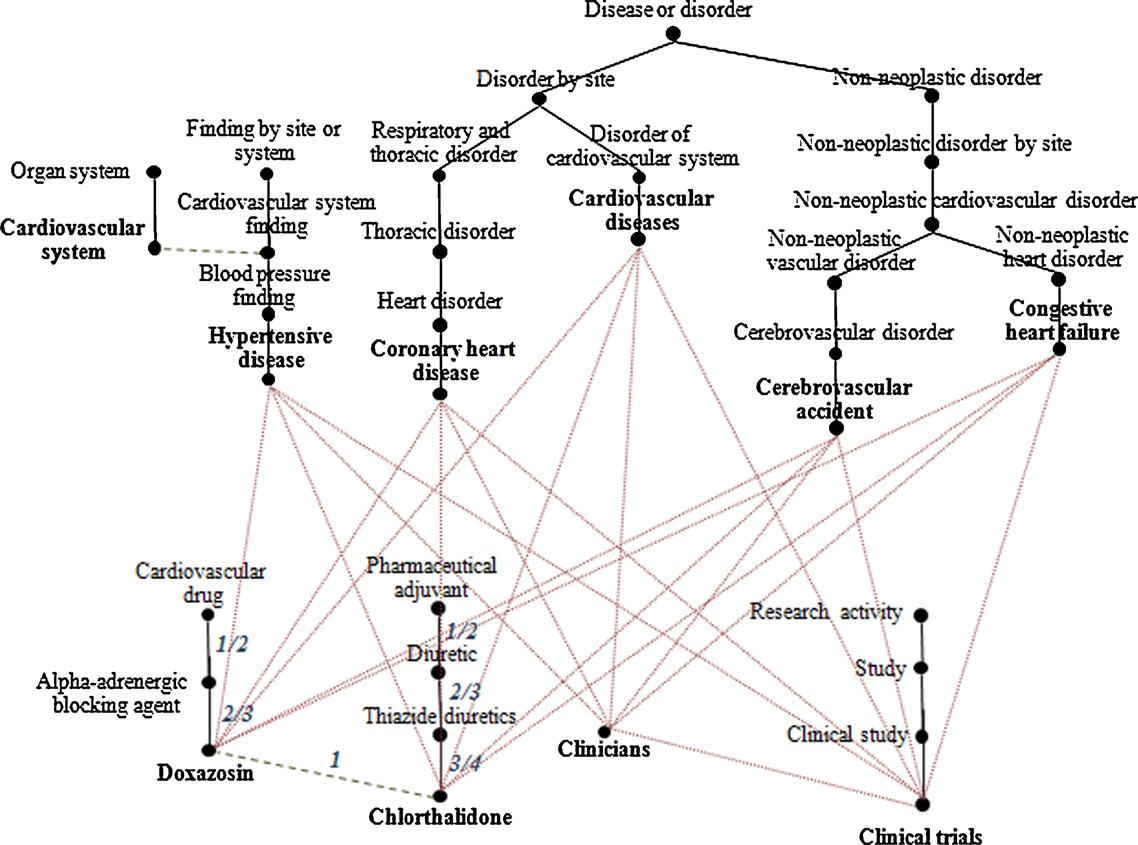 L. Plaza et al. / Artiﬁcial Intelligence in Medicine 53 (2011) 1–14 Fig. 4. An example of a simpliﬁed document graph from sentences S1 and S2. Continuous lines represent hypernymy relations; dashed lines represent related to relations;
and dotted lines represent associated with relations. The edges of a portion of this graph have been labelled with their weights.
The n vertices with the highest salience (the hub vertices) rep- the ﬁnal clusters consist of the HVSs resulting from the clustering resent the most connected nodes in the graph, taking into account algorithm plus the non-HVS vertices that are later attached to them.
both the number and the weight of the edges. The clustering algo- rithm starts grouping the hub vertices into hub vertex sets (HVSs) HVSs can be interpreted as sets of concepts strongly connectivity(v, C = related in meaning and will represent the centroids of the clusters.
To construct the HVSs, the clustering algorithm ﬁrst identiﬁes the pairs of hub vertices that are most closely connected and merges them into a single HVS. Then, for each pair of HVSs, the algorithm checks whether the internal connectivity of the vertices they con- two fragments of two clusters from the document tain is lower than the connectivity between them. If so, the HVSs example. The purpose of this ﬁgure is to give readers an idea of the are merged. This decision is encouraged by the assumption that appearance of the clusters generated by the algorithm. The entire the clustering should show maximum intra-HVS connectivity but clusters present, respectively, 182 and 27 concepts. The cluster- minimum inter-HVS connectivity. Intra-connectivity for a HVS is ing method produces four clusters for the full document. It may calculated as the sum of the weights of all edges connecting two be observed that cluster A groups concepts related to diseases, vertices within the HVS, as shown in Eq. for syndromes and ﬁndings, as well as concepts regarding chemical two HVSs is computed as the sum of the weights of all edges con- and pharmacological substances, while cluster B collects concepts necting two vertices, each vertex belonging to one of the HVSs, as related to population and professional groups.
3.1.6. Sentence-to-cluster assignment j ∃v,w ∈ HVS Once the concept clusters have been created, the aim of this step is to compute the semantic similarity between each sentence inter-connectivity(HVSi, HVSj) = graph and each cluster. As the two representations are quite dif- k ∃v ∈ HVS ferent in size, traditional graph similarity metrics (e.g., the edit j ∧ek connect(v,w) distance are not appropriate. Instead, the similarity between Once the centroids of the clusters have been determined, the a sentence graph and a cluster is computed using a non-democratic remaining vertices (i.e., those not included in the HVSs) are itera- voting mechanism, so that each vertex, v within a sentence graph, tively assigned to the cluster to which they are more connected. The Sj, assigns a vote to a cluster, Ci, if the vertex belongs to the HVS of connectivity between a vertex, v, and a cluster, Ci, is computed as that cluster; half a vote if the vertex belongs to the cluster but not the sum of the weights of the edges that connect the target vertex to its HVS; and no votes otherwise. The similarity between the sen- to the other vertices in the cluster, as shown in Eq. tence graph and the cluster is then calculated as the sum of the

Guidelines for the Management of Anticoagulant and Anti-Platelet Agent Associated Bleeding Complications in Purpose: To be used as a common tool for all practitioners involved in the care of patients who present with bleeding problems related to use of anticoagulant and anti-platelet agents. The guidelines were developed to represent available evidence from the literature. It is recognized that there may be instances where interventions not identified in these guidelines may be indicated. These guidelines are not meant to supersede the clinical judgment of the treating physician. For purposes of organization, the guidelines are arranged in a linear order from initial interventions through definitive care. The clinician should recognize that treatment phases may overlap and interventions will occur concurrently.