Helmbrecht and Thiagarajah J Addict Med • Volume 2, Number 1, March 2008 FIGURE 3.
Hypoxia-mediated pregnancy complications.
across the villous membrane into the villous capillaries and ized rats, this effect seemed to be unrelated to the hemody- travel to the fetus. Metabolic and respiratory waste is passed namic response or pharmacokinetic profile of cocaine. Fur- in the opposite direction into the maternal circulation. When thermore, in vitro studies of human myometrial cells have maternal perfusion of the uterus is interrupted or severely demonstrated that cocaine increases myometrial contractions curtailed, portions of the placenta can undergo separation by both adrenergic and nonadrenergic mechanisms.60,61 from the uterus (abruption) or hypoxic death (infarction).
The increased autonomic response to withdrawal from These are demonstrated in Figures 6 and 7, respectively.
opiates,62 benzodiazepines, and alcohol63 has long been Placental abruption has many causes and complicates known. Using Doppler velocimetry, maternal cigarette smok- approximately 1% of pregnancies.54 Risk factors for abrup- ing has been demonstrated to cause chronically increased tion include previous abruption, smoking, trauma, cocaine resistances in the maternal uterine, umbilical, and fetal mid- use, multifetal gestation, hypertension, preeclampsia, throm- dle cerebral arteries.64,65 In an earlier study by Koss and bophilias, advanced maternal age, preterm premature rupture colleagues,66 patients in the second and third trimesters of of the membranes, and polyhydramnios. The strongest asso- pregnancy had their uterine artery blood flow measured by ciations have been demonstrated in patients with chronic Doppler before, during, and for several minutes after the hypertension and superimposed preeclampsia (odds ratio smoking of a standard cigarette. During smoking, there was a [OR],55 2.8 –3.8), cocaine or other stimulant use (OR, velocity reduction within the uterine artery in all subjects.
5–10),56 and tobacco use (OR, 1.6 –2.1).57 An abruption can The degree and duration of the reduction in blood flow result in massive hemorrhage with fetal and/or maternal varied. In most subjects the velocities were approximately death. Lesser degrees of abruption can be less spectacular but 50% of baseline, but a reduction to almost zero was seen in render significant portions of the placenta nonfunctional for several subjects. Figure 8 shows sample uterine artery Dopp- the remainder of the pregnancy, thereby limiting fetal access ler flow wave forms from a normal pregnancy (A) at 32 to oxygen and nutrients. Similarly, placental infarctions can weeks and an opiate-dependent patient (C) at 34 weeks in result in fetal demise when ⬎50% of the placental mass is moderate withdrawal. This latter patient was noncompliant lost or be clinically insignificant when ⬍ 10% of the placental with treatment and experienced multiple episodes of with- mass is involved. Any sublethal insult to the placenta— drawal throughout the pregnancy. She delivered a growth- abruption or infarction—that limits nutrient and oxygen de- restricted fetus, and the placental pathology confirmed mul- livery to the fetus has the potential to limit the fetus' growth.
tiple infarctions throughout the parenchyma.
Furthermore, in an environment of chronic hypoxemia, brain Many of the infectious complications of pregnancy in development can be compromised, leading to hypoxic-isch- addicted gravidas lead to inflammatory changes within the emic brain injury.
uterine decidual tissue and amniotic fluid, which cause in- Although the precise mechanism by which hypoxia can creased amounts of interleukin-8, interleukin-6,67,68 tumor occur in the uteroplacental environment is not known, one necrosis factor ␣,69 and other inflammatory cytokines. These possible way is via direct or catecholamine-induced uterine activate production of prostaglandins, metalloprotease, and artery spasm. Although the direct effects of stimulants on collagenase enzymes, all of which contribute to premature uterine artery flow in pregnancy have not been studied, uterine contractions and digestion of the fetal membranes.
cocaine and methamphetamine are strongly catecolaminergic Alternatively, the cytokines and prostaglandins produced agents and side effects of use include hypertension and in the decudual cells can cause preterm contractions and tachycardia. Studies on the effects of cocaine on the gravid cervical effacement with premature labor as the result. Fi- myometrial cell have demonstrated inhibition of neuronal nally, decidual enzyme production may dominate the process, catecholamine reuptake in the gravid uterus.58 In an animal resulting in membrane digestion and amniorrhexis. Once model, cocaine has been shown to have a direct effect on bacteria gain access to the decidual tissue, a transmembrane enhancing myometrial contractility.59 In chronically catheter- migration of the organisms will result in chorioamnionitis.
FIGURE 4.
Inflammatory cytokine-mediated pregnancy complications.
2008 American Society of Addiction Medicine 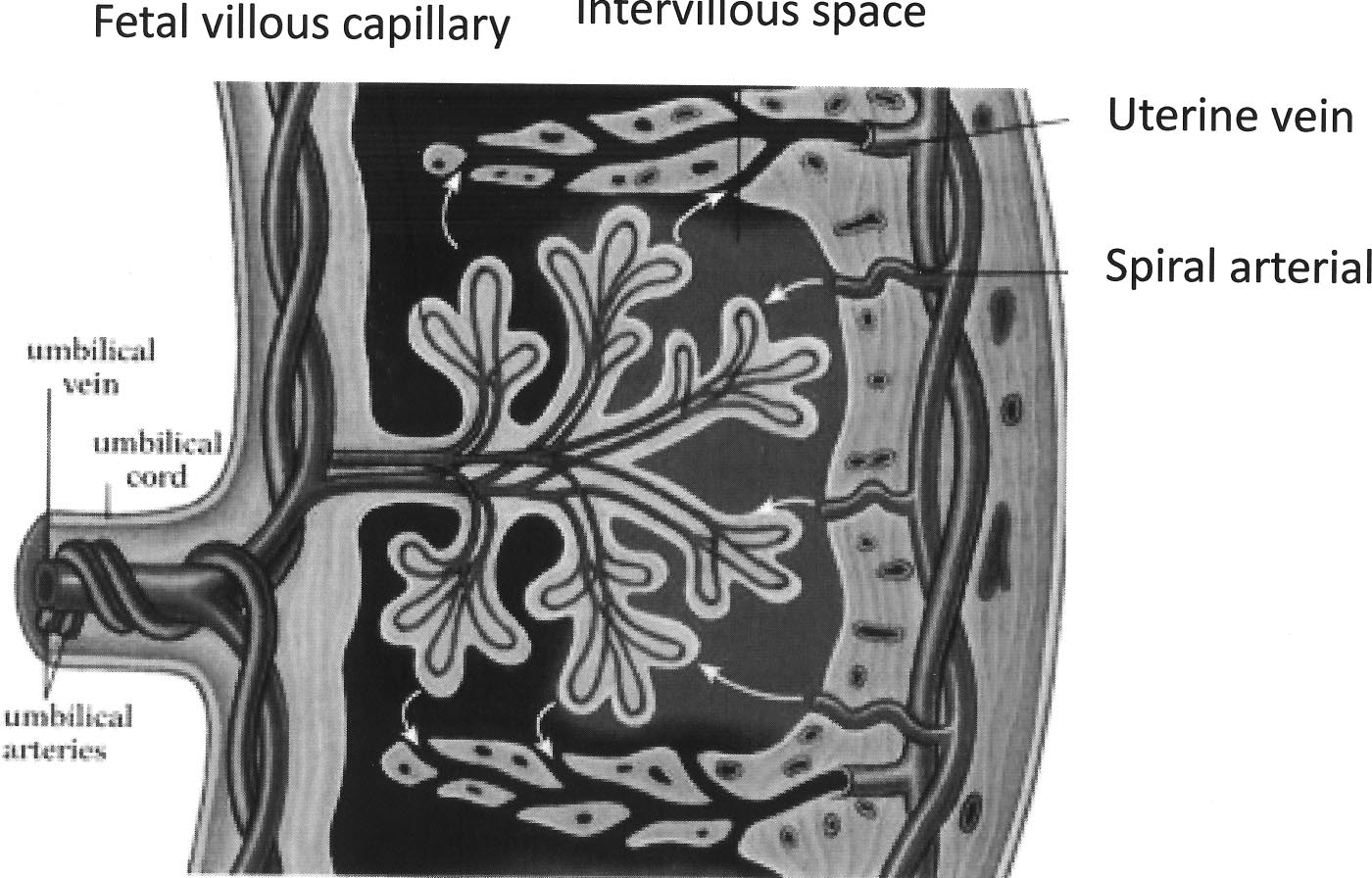 J Addict Med • Volume 2, Number 1, March 2008 Addiction Disorders in Pregnancy FIGURE 5.
Schematic drawing of placental circulation.
These patients will present with fever, uterine tenderness, and There must be sound scientific evidence to support its use.
contractions. If not promptly treated with antibiotics and Evidence of widespread use and support from another qual- delivery, the infection will progress to sepsis and septic shock ified clinician are methods of justifying off-label prescribing.
and death may ensue.
An informed consent discussion must be conducted, notifying Evidence that drugs of abuse acting through multiple the patient of the potential risks, anticipated benefits, and mechanisms (direct, hypoxemia, and inflammatory) result in alternatives to treatment. Finally, legible documentation of uterine contractions, cervical dilation, and membrane diges- these discussions in the medical records is important.
tion is supported by the observation that these patients presentwith advanced cervical dilatation at admission and a shorter latency period to labor and delivery.70 Further investigations Alcohol is a known teratogen that causes a constellation of potential indirect mechanisms of action of drugs of abuse of malformations, including microcephaly, growth defi- are needed, including altered prostaglandin production, inhi- ciency, central nervous system dysfunction, including mental bition of beta-adrenergic response, and direct effects on retardation and behavioral abnormalities, and craniofacial intracellular calcium mobilization for a more complete un- abnormalities.72 Children born with the Fetal Alcohol Spec- derstanding of the clinical ramifications of drug use during trum Disorder will have lifelong, serious disability. Whether medical treatment during pregnancy can prevent this devas-tating outcome remains to be proven. It is incumbent upon the MEDICAL TREATMENT OF ADDICTION
physician caring for these patients to carefully weigh the risks of the medication intended to maintain abstinence against the In recent years, major advances have been made with likelihood of continued alcohol use. The decision of whether respect to medical treatment of addiction disorders. The to treat is based on the risk benefit analysis.
numbers of medications being made available is unprece- Benzodiazepines remain the treatment of choice for dented. Still, obstacles to delivery of these medications to detoxification during pregnancy. These agents interact with reproductive-age women exist, not the least of which is the the gamma-aminobutyric acid-A (GABA) receptor, which reluctance of the pharmaceutical industry to perform clinical mediates an increase in inhibitory neurotransmission that trials on this population. The little information that is avail- counteracts the excitatory state of the brain in alcohol with- able on the use of these agents in pregnancy is in the form of drawal. There is some evidence that women may have a case reports or small case series. Taken with the liability greater response to benzodiazepines than men,73 allowing for issues, women who may become pregnant or those who are reduced dosages. Carbamazepine has been used extensively pregnant often are denied treatment despite the "greater in Europe for detoxification from alcohol. Several small harm" of continued drug or alcohol use on the developing studies have demonstrated that this agent is most likely as fetus. There are currently no medications approved by the safe and efficacious as the benzodiazepines.74,75 It has the FDA for treatment of addiction disorders during pregnancy.
advantage of having no abuse potential, and it has been This does not prevent the practitioner from using a medica- widely used in pregnancy for seizure disorders.
tion "off label" but certain requirements must be met.71 The However, both agents have been associated with ad- patient must meet the diagnostic criteria for dependence.
verse pregnancy outcomes. Despite early reports of facial 2008 American Society of Addiction Medicine 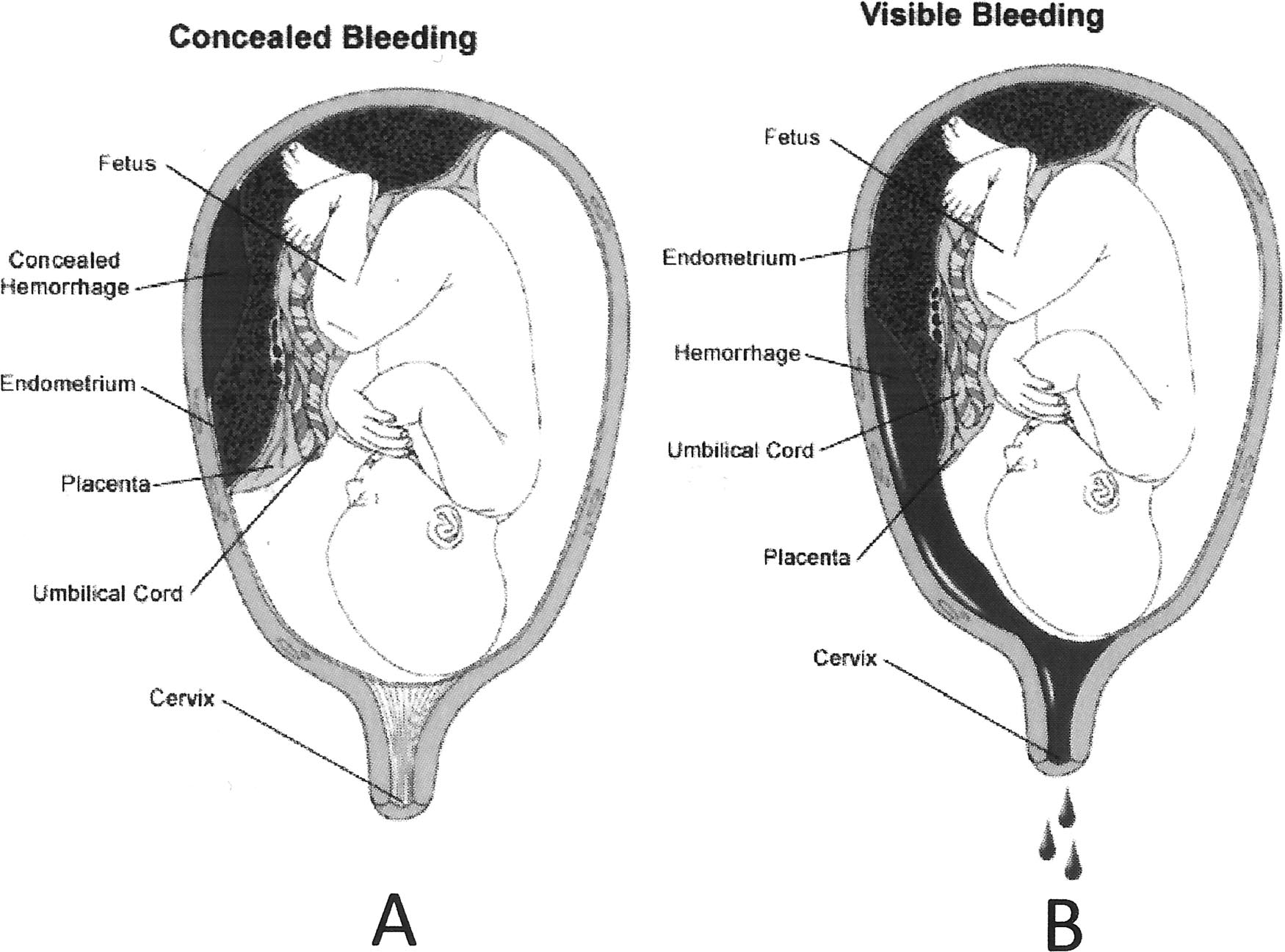 Helmbrecht and Thiagarajah J Addict Med • Volume 2, Number 1, March 2008 FIGURE 6.
Types of abruption. (A) Concealed abruption. Blood collects behind the placenta. There is no vaginal bleeding
and therefore no overt evidence of the abruption. (B) Clinically apparent abruption. Blood tracks between the membranes
and escapes through the vagina and cervix. The bleeding can range from scant to massive depending on the extent of the
abruption. Figure used by permission from the University of Utah Health Care (http://uuhsc.utah.edu/healthinfo/pediatric/
hrpregnant/bleed.htm).
clefts and other fetal anomalies after benzodiazepine expo- the study. Their records showed heavy general use of health sure, a large study of women whose deliveries were regis- care, frequent alcohol and substance abuse, and other disor- tered by the Medicaid system challenged this position.76 The ders that could confound any effect of the benzodiazepines.
investigators identified 80 pregnant women who had received Thus, the high rate of teratogenicity after heavy maternal 10 or more benzodiazepine prescriptions during the 4 years of benzodiazepine use occurs when there is multiple alcohol andsubstance exposure and is not likely the result of benzodiaz-epine exposure. This finding has been confirmed by otherinvestigators.77 Benzodiazepines require albumin for serumtransport. In the fetus, serum albumin levels are quite lowuntil the third trimester when levels exceed maternal values.
Therefore, fetal benzodiazepine levels will remain low duringthe first and second trimester and increase to those greaterthan maternal levels during the third trimester. Accordingly,there exists evidence of impaired intrauterine growth, intox-ication, and neonatal abstinence syndrome in third-trimesterexposed fetuses.78 Significant differences also were seen inthe frequency of perinatal neurobehavior in benzodiazepine-exposed infants compared with controls. First-trimester ex-posure to Carbamazapine has been associated with an approx-imately 1-percent risk of neural tube defects.79 Because thisdefect may be prevented with maternal administration of folic FIGURE 7.
Multiple placental infarcts. Gross sections through the central placenta demonstrate infarction of acid, it is recommended that all pregnant women receiving ⬎50% of the placental mass.
carbamazapine also receive folate supplementation.80 The 2008 American Society of Addiction Medicine