The Mississippi Press Meth arrests and lab seizures declining in Jackson County
Tuesday, September 07, 2010 By CHERIE WARD, The Mississippi Press PASCAGOULA, Mississippi -- A law that took effect in July treating pseudoephedrine as a Schedule III controlled substance - which makes the drug illegal to possess without a prescription - seems to be making a difference in Mississippi and Jackson County. Pseudoephedrine -- commonly found in nasal and sinus decongestants -- is the key element in the meth-making process. As of July 1, state law requires that pseudoephedrine be available through a doctor's prescription only. Before July, Mississippi consumers needed only a photo ID to purchase what are now prescription-only medications, including Sudafed, Advil Cold and Sinus, Bronkaid, Primatene, Claritin-D, Aleve-D, Nyquil-D, Mucinex D, Tylenol Sinus and Severe Cold, and Zyrtec-D. Mississippi is the second state in the nation, after Oregon, to require a prescription for such medicines. "Last year was the first time the number of meth arrests exceeded arrests for powder and crack cocaine," said Marshall Fisher, director of the Mississippi Bureau of Narcotics. Fisher reported last month that meth-related arrests are one-third of drug-related arrests in Mississippi. As narcotics agents statewide watched the number of meth labs more than double, from 300 in 2008 to 722 in 2009, they knew something had to change. Marshall said that was the driving force behind the anti-meth legislation, which he and local drug agents pushed. "It used up a lot agent hours to track down leads we got from the old system," Fisher said. "We were neglecting other areas tracking down possible leads. There were loopholes within the old system, which meth-makers exploited." Fisher said statewide agents discovered drugstore employees were making extra money buying pseudoephedrine for friends, customers - anyone else willing to pay a fee. "And the old system only tracked purchases by drugstores," Fisher said. "The meth problem had outgrown the old tracking system. We arrested a guy with 60 IDs. How do you track a guy with 60 IDs?" Lt. Curtis Spiers, commander of the Narcotics Task Force of Jackson County, said there were only 12 meth arrests last month, down from 28 in July. In June, Spiers reported there were 48 meth arrests that month and 52 in May. Meth lab seizures are decreasing as well, Spiers said. "There were 21 labs seized in July, 22 in June, and 31 in May," Spiers said. "There were only six in August. We're seeing the trend go down." Spiers maintained that if the rest of the country would follow Mississippi and Oregon the number of meth labs seized would dramatically decline, almost overnight, and improve public safety. "Of course, if that happened, the cartel would start smuggling methamphetamine into the United States -- just like they are already doing - only on a much larger scale," Spiers said. "The law taking hold nationwide would decrease the meth labs. As far as a public safety issue, meth labs are the largest issue we deal with. Meth addiction is a problem and getting help is a choice, however, if they are cooking meth in a neighborhood - that's a huge public safety risk." Meth is highly addictive, and the manufacturing process is one of the drug's dangerous aspects. A combination of chemicals and high temperatures produces toxic fumes and a volatile, highly combustible situation, Fisher said. "Cleaning up a meth site can cost $2,500 to $7,500 and it's the only drug with ancillary costs," Fisher said. Another expense, Fisher added, is drug agent certification. "Drug agents handle all garbage associated with the manufacture of meth as hazardous waste," Fisher said. "They earn certification through intense training, where they practice contained breathing and how to properly remove protective clothing." 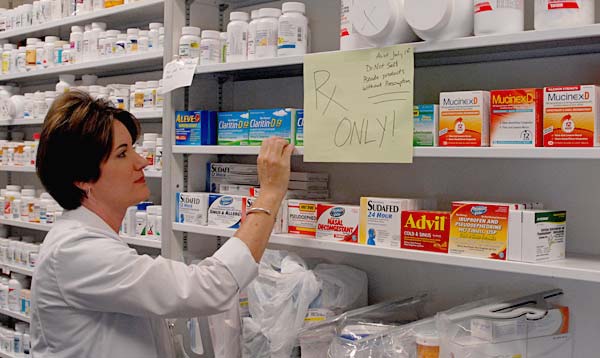 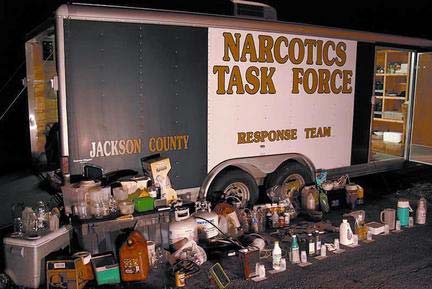 The Mississippi Press
Meth arrests down in July in Jackson County

Monday, August 9, 2010
Cherie Ward, The Mississippi Press
An anti-methamphetamine law
tightening distribution rules for
pseudoephedrine took effect in July and
some drug agents are saying it's already
making a difference in meth-related
arrests.
"But, it will take a good 90 days or six
months to get a true snapshot of the
effects throughout the state," said
Marshall Fisher, director of the
Mississippi Bureau of Narcotics.
Pseudoephedrine -- commonly found in
The Narcotics Task Force of Jackson County seized these the nasal and sinus decongestant methamphetamine precursors from two drug busts and arrested Sudafed -- is the key element in the three people charged with manufacturing methamphetamine, meth-making process. As of July 1, authorities said Tuesday. state law requires that pseudoephedrine be available through a doctor's prescription only. Mississippi and Oregon are the only states with such a law. "With only two states with this type of law, we'll still have smurfers going across state lines and people that hoarded it," Fisher said. "We're seeing results, but it could be a year before we see a significant reduction." Lt. Curtis Spiers, commander of the Narcotics Task Force of Jackson County, reported in December that the number of methamphetamine arrests in 2009 topped cocaine arrests in Jackson County for the first time in the task force's 20-year history, with 222 meth arrests and 93 meth lab seizures. "From January through July of this year, we've had 238 meth arrests," Spiers said. The arrests outweigh other apprehensions, including 83 for cocaine and 86 for marijuana so far this year. There also have been 142 meth lab seizures since January. Fisher said the statewide numbers are similar, with 722 labs seized in 2009 and 989 meth arrests. He said there have been 569 meth labs seized and 685 meth-related arrested since January. "We knew we were poised to double our arrests from last year," Spiers said. "That's why we pushed for this law. We just need the rest of the country to follow." Spiers said the law is making a difference, and he hopes in the long run to see a significant decrease in meth arrests as well as usage. In July, there were 28 meth arrests, down from 48 in June and 52 in May. There were 21 labs seized in July, 22 in June, and 31 in May. "In just one month's time, it's already trending a downward spiral," Spiers said. In 2005, the Oregon Legislature was the first group of lawmakers to pass a statewide anti-meth law, which drew national attention. Oregon's law requiring a prescription for medicine with pseudoephedrine took effect in July 2006. Oregon Attorney General John Kroger said Friday that in 2004, before his state's anti-meth law was passed, police busted 472 meth labs statewide. "In 2007, authorities shut down only 22," Kroger said. "The number of seizures fell to 10 in 2009." Kroger added that his state's property crime rate, which he said has a direct correlation to meth use, declined by 17 percent in 2006, the largest decrease in the nation that year. Fisher said in Mississippi there were 61 meth arrests in July 2009, and there were 45 last month. "Within the next couple of years, we're absolutely expecting numbers like Oregon," Fisher said. "I absolutely believe this law will have a significant reduction."

Obesity Care 8800 ROESELARE (Belgium) Phone: +32 51 23.70.08 Fax: +32 51 23.79.41 email: [email protected] website: http://www.obesitycare.be Informed Consent for Roux-en-Y Gastric Bypass Please read this form carefully and ask about anything you may not understand. I am giving P. Pattyn and B. Smet (my doctors) and the whole ObesityCare team permission to perform a

Consensus approach to the diagnosis of Type 2 diabetes The London Diabetes Strategic Clinical Network recommends that a consensus approach to the diagnosis of type 2 diabetes be reached across London to ensure cross boundary differences in diagnosis are removed. Consistent with many CCGs across London and in line with the World Health Organisation1,2, Diabetes UK3,4 and NHS Health Check recommendations, we recommend the adoption of HbA1c for the diagnosis of type 2 diabetes mellitus* across London. Background Type 2 diabetes is a condition affecting 3.2 million (6%) of the UK population5, 6 and 418,346 across London7 with an additional 84,108 people currently undiagnosed in London7, 8. A study conducted in 2011 by the Clinical Effectiveness Group in Queen Mary's University reviewed 519,288 GP records in patients aged 25-79. This identified that 1 in 10 had a 20% risk of diabetes over the next 10 years9. The total cost (direct care and indirect costs) associated with diabetes in the UK currently stands at £23.7 billion and is predicted to rise to £39.8 billion by 2035/65.