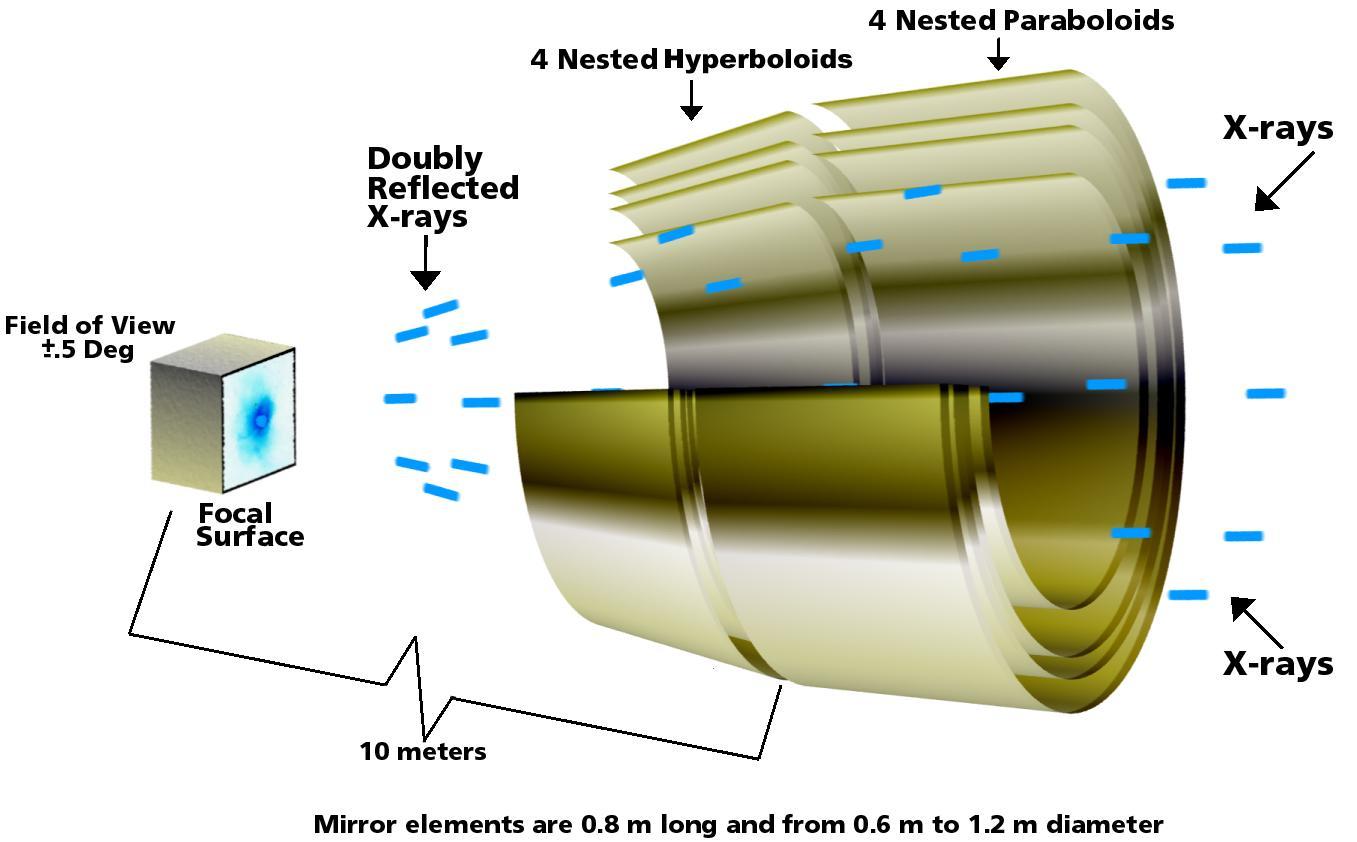 Figure 1: Cut-away schematic of the Chandra X-ray Observatory‘s x-ray telescope. Four nested, co-axial, confocal, grazing-incidence mirror pairs focus cosmic x rays onto the telescope‘s focal surface. All past, present, and planned high-resolution x-ray telescopes utilize this basic (Wolter-I-like) geometry—albeit with differing mirror prescriptions, dimensions, and number of shells. [Credit: NASA/CXC/ D. Berry] 2.4. Performance metrics
Two key metrics characterize the optical performance of an x-ray telescope. These govern its imaging capability and its sensitivity for detecting sources and accurately measuring their spectral flux. Section discusses the angular resolution; Section the collecting area. Sectionelaborates on the factors that determine detection sensitivity. 2.4.1. Angular resolution
The point spread function (PSF) fully describes the image of a point source as a function of the photon‘s energy and direction with respect to the optical axis. For a high-resolution x-ray telescopec, the PSF comprises a compact core (determined by alignment errors, surface figure deviations from the optical prescription, and aberrations inherent in the prescription) and an extended halo or wings (caused by diffractive scattering by surface micro-roughness and by particulates on the surface). The PSF core is then essentially geometric in origin and, thus, approximately independent of photon energy (achromatic).d On the other hand, the PSF wings are diffractive in origin and, thus, dependent upon photon energy (chromatic). Hence, minimizing the PSF wings typically is an issue of limiting mirror micro-roughness (e.g., by super-polishing to about 0.3-nm micro-roughness or better) and of controlling particulate contamination49,50. Thus, the processes for minimizing the PSF wings are largely decoupled from those for optimizing the PSF core. c The relevant unit for the angular resolution of precision x-ray telescopes is an arcsecond (″): 1″ = 4.848 radian. d Large-area x-ray telescopes nest multiple co-aligned, co-axial, grazing-incidence (primary and secondary) mirror pairs in order to utilize more efficiently the available aperture (. Owing to the sensitivity of reflectance to grazing angle ( , the energy-dependent response of each mirror shell depends upon its mean axial slope (cone angle)  . Consequently, although the PSF core of each mirror shell is nearly energy independent, the PSF core of an ensemble of mirror shells can be energy dependent—even in the geometric-optics limit. 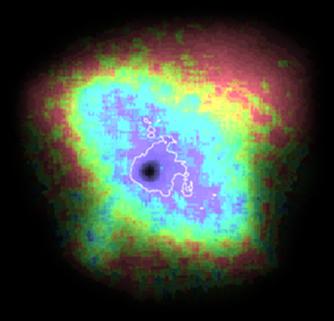 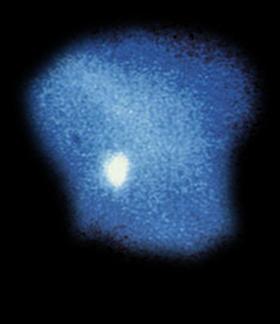 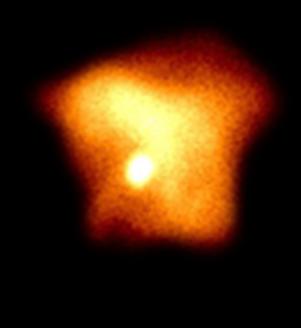 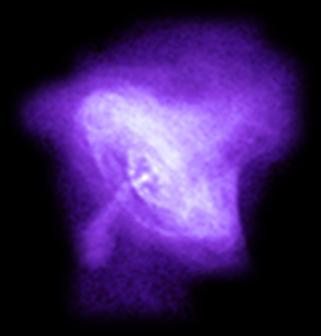 This section gives a cursory survey of the x-ray universe, featuring x-ray imagesi obtained with the Chandra X-ray Observatory. In providing a sampling of cosmic x-ray sources, it illustrates the importance of high angular resolution. is a mosaic of 30 x-ray-color images of the central region of our Galaxy. At the 26,000-light-yearj (26-kly) distance to the Galactic Center, the mosaic spans a region approximately 900 ly by 400 ly. The Galactic Center is obviously a very crowded field, which requires Chandra‘s arcsecond resolution to elucidate structure and to detect the numerous (≈1000) faint discrete sources in the presence of several bright sources and diffuse x-radiation from very hot (tens-of-million-degree) plasma ejected and shock heated by stellar explosions and winds. The bright source (Sagittarius A) near the center of the mosaic is associated with a super-massive (≈ 3106 solar-mass) black hole at the nucleus of the Galaxy. The bright extended source at the far left is a supernova remnant. Most of the other bright sources are ―binary x-ray sources‖, powered by accretion of gas onto a compact star from a binary-companion normal star. Figure 3: A mosaic image, spanning 2°  0.8° in 30 pointings, of the (Milky Way) Galactic Center region in x-ray colors—1–3 keV (red), 3–5 keV (green), 5–8 keV (blue). [Credit: NASA/UMass/ Q. D. Wang et al.51] displays images of two different types of supernova remnants (SNR), the aftermath of an exploding star (supernova). Cassiopeia A (left image, in x-ray colors) is a ―shell-type‖ SNR, which is powered by the original explosion that occurred approximately 300 years ago. The supernova‘s blast-wave ejecta interacts with the circumstellar and interstellar media, producing forward and reverse shocks that heat the gas to (millions-of-degree) x-ray emitting temperatures. The thin, outer x-ray shell results from synchrotron emission from electrons in the interstellar medium that are shock accelerated to relativistic energies. Chandra‘s arcsecond imaging not only reveals the intricate structure of the shocks and filaments, but also discovered the relic neutron star lying near the center of the SNR. The Crab Nebula (right image, in composite colors) is a ―filled-type‖ (plerionic) SNR, which is powered by the central pulsar (rapidly rotating, highly magnetic neutron star). In the resulting pulsar-wind nebula, relativistic electrons emit x rays profusely via the synchrotron mechanism. A remnant of a supernova explosion observed in 1054, the Crab Nebula is nearly 1000 years old. Over this time, the highest energy electrons radiate away their energy, which explains why the x ray nebula is significantly smaller than the nebular size observed in lower energy radiation. As already discussed an, Chandra‘s sub-arcsecond resolution manifests the complex structure of the pulsar-wind nebula. i These and many more arcsecond-resolution x-ray images are available from the Chandra X-ray Center and may be j A light year (ly), is of course the distance traveled by light in 1 year—9.461015 m. A comparable distance unit commonly used by astronomers is the (parallax-second) parsec (pc), where 1 pc = 3.26 ly = 3.091016 m is the distance at which 1 astronomical unit (AU) subtends an angle of 1″ (4.848 rad). The diameter of the earth‘s orbit around the sun defines the astronomical unit: 1 AU = 1.501011 m. The following guideline gives an indication of relevant astronomical scales: The separation between stars (in the solar neighborhood) is roughly a pc; the diameter of a galaxy, tens of kpc; the separation of galaxies, Mpc; and cosmologically significant distances, Gpc. 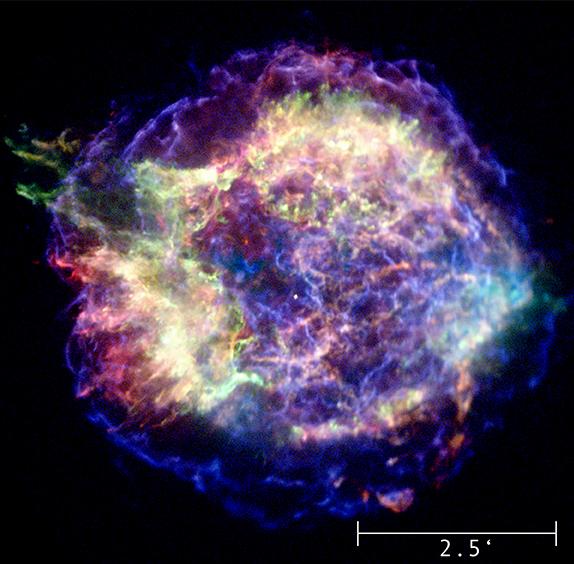 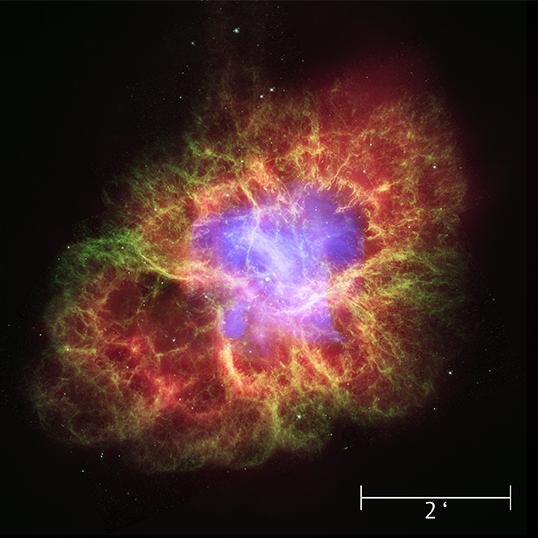