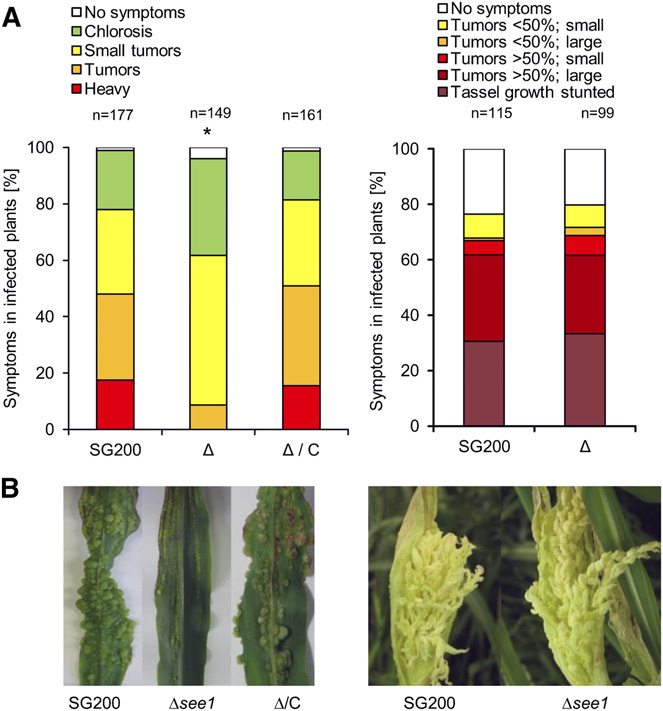 Tumor Induction by Ustilago maydis regulation of cell division (TC307447) increased 230-fold in wild-type infections . Together, these datasuggest that SG200Δsee1 fails to induce leaf tumor growth at thelevel of host cell DNA synthesis and cell proliferation, processesthat are hallmarks of maize responses to infection (Doehlemannet al., 2008).
See1 Is Required for U. maydis-Induced Plant DNASynthesis during Leaf Tumor Formation Because see1 expression is prominent during tumor enlargementand our initial observations indicated that SG200Δsee1 hyphaewere mainly restricted within mesophyll and bundle-sheath cells,we performed a more thorough confocal microscopy investigationof leaf infections. U. maydis-induced tumor growth reﬂects hostproliferation, then cell expansion; thus, DNA synthesis is a pre-requisite for growth. To monitor DNA synthesis in planta, wetreated uninfected and infected leaves with 5-ethynyl-2-deoxy-uridine (EdU) at several time points over a period of 5 h and thenharvested samples. Incorporation of EdU was visualized by at-taching a ﬂuorescent tag (AF-488). Maize nuclei were stained withpropidium iodide (PI) following a procedure described previouslyfor maize anthers (Kelliher and Walbot, 2011). In maize leaves at2 DPI, EdU treatment did not result in any detectable labeling. Weobserved this in maize leaves colonized with U. maydis and in Figure 1. Organ-Speciﬁc Phenotype of See1 Demonstrating Its Role in uninfected maize leaves (Figure 3A), suggesting that no or only rare, sporadic maize DNA synthesis occurs in seedling leaf blades (A) Disease symptoms caused by SG200Δsee1 in comparison with the during the early phase of infection. We conclude that in the in- wild-type progenitor strain SG200 in leaves and tassels. The mutant fected zones, the host cells were already postmitotic. By 4 DPI, shows a signiﬁcant reduction in leaf virulence. Maize seedling leaves were when the ﬁrst macroscopic symptoms appear in wild-type in- scored at 12 DPI. Disease symptoms in maize tassels were scored at 14 fections, EdU incorporation into leaf DNA was widespread (Figure DPI as described by Schilling et al. (2014). SG200, the virulent U. maydis 3A). Leaf cells invaded by fungal hyphae synthesized new DNA, progenitor strain; D, deletion mutant for see1; D/C, genetic complemen-tation of the deletion strain. The experiment was performed in three in- and this coincided with the induction of mitosis, which could be dependent biological replicates. n = number of plants infected. *P # 0.001.
visualized at different stages of cell division and as contiguous (B) Symptoms caused by U. maydis strain SG200 in comparison with the pairs of similarly labeled cells (Figure 3B). Such invaded cells also SG200Δsee1 mutant and the complemented strain in leaves and tassels.
underwent multiple division events over several days (Figure 3B).
The leaf photograph shows typical disease symptoms at 12 DPI; the As an additional negative control for the EdU labeling, we tassel photograph is at 14 DPI. Similar to SG200, the mutant caused injected 5 mM hydroxyurea, a DNA synthesis inhibitor, into disease symptoms in tassels, but leaf tumors were signiﬁcantly reduced.
seedling leaves infected with wild-type SG200 or SG200Dsee11 d before labeling them with EdU. Pretreatment with hydroxy- signiﬁcantly induced (>2-fold) in SG200 compared with SG200Δsee1 urea eliminated EdU incorporation in all samples; this was also at 6 DPI, while only two genes were repressed true in SG200-infected cells that already initiated division before The transcripts induced by infection with wild-type treatment. Hydroxyurea appears to block DNA synthesis com- pathogen were enriched for genes involved in DNA modiﬁcation pletely and validates the speciﬁcity of the EdU labeling assay (i.e., histones), DNA replication, and DNA damage repair as well Quantiﬁcation of EdU labeling showed as genes associated with the cell cycle ( that 67.5% 6 4.2% of the maize cells colonized by SG200 in- . Gene Ontology (GO) analysis showed that 71 of the 549 corporated EdU at 4 DPI (Figures 4A and 4C). Labeling was SG200-induced genes are associated with DNA metabolism and initiated from 3 to 4 DPI, while no DNA synthesis was observed cell cycle regulation (and in uninfected leaves of the same age. Therefore, U. maydis re- list the top 30 GO terms that are associated with DNA activated DNA synthesis and cell division in maize leaves at the metabolism and cell cycle regulation). As shown in Figure 2B, onset of tumor induction. By contrast, SG200Δsee1-infected DNA replicase D (TC280511), which is involved in S-phase DNA leaf samples showed only 7.3% 6 1.7% EdU-positive cells at replication, was induced 690-fold in wild-type infections com- 4 DPI (Figures 4A and 4C; The pared with SG200Δsee1. DNA histone H3 (TC298222), which is SG200Δsee1 deletion mutant fails to trigger DNA synthesis and required to generate nucleosomes, was induced 862-fold in wild- cell division to support the formation of large tumors.
type infections. Maize Skp1 (TC293032) was induced 875-fold in One might argue that the reduction in host cell DNA synthesis SG200 infections versus SG200Δsee1. Also, a Leu-rich repeat could be a general consequence of reduced virulence (i.e., receptor-like protein responsible for protein phosphorylation and an impaired biotrophic interaction); therefore, it would not be 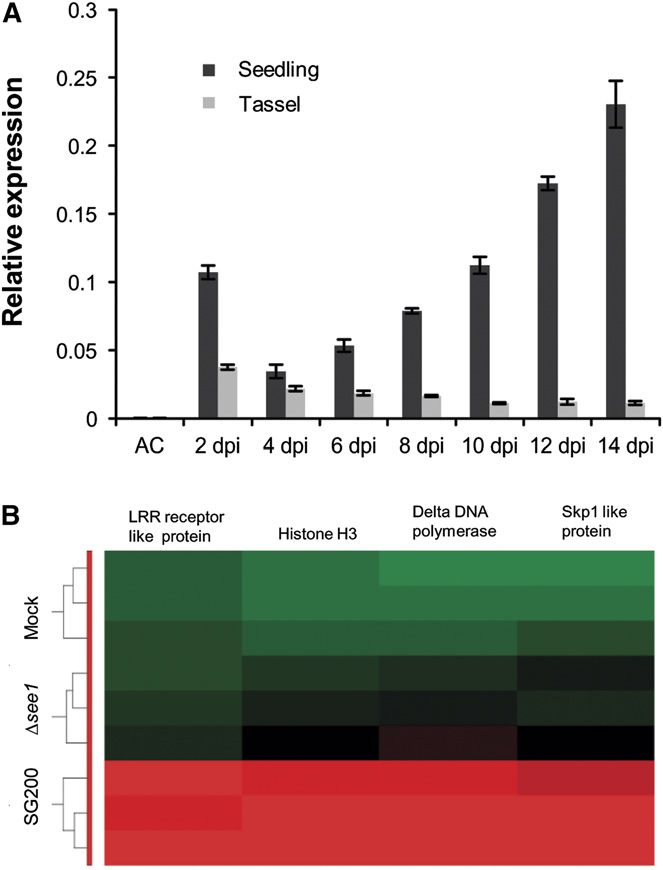 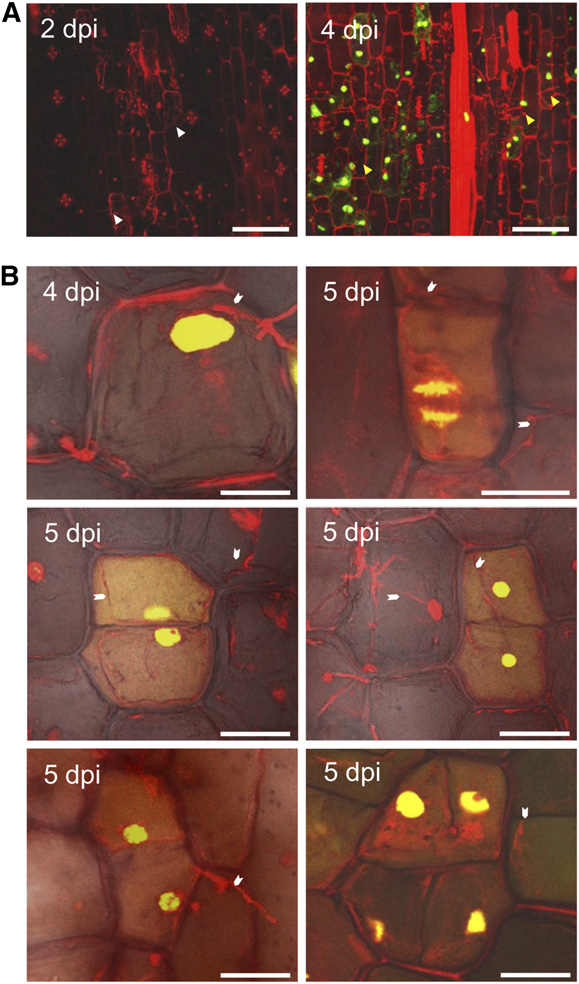 observed (Figure 4A). This observation indicates that biotrophiccolonization of maize smut per se does not induce host DNAsynthesis. Reactivation of DNA synthesis is speciﬁc to tumorformation. Next, a U. maydis deletion mutant lacking the secretedeffector Tin3 was tested. Deletion of tin3 results in small leaf tu-mors similar to SG200Δsee1 strains (Brefort et al., 2014). Despite Figure 2. Gene Expression during Maize Colonization with SG200 andSG200Δsee1.
(A) RT-qPCR expression proﬁling of the see1 gene during the biotrophicphase of U. maydis growth in seedling and tassel tissues. Expressionlevels are shown relative to mean expression of ppi transcripts. Geneexpression was analyzed in axenic culture (AC), seedling, and tasseltissues at consecutive time points from 2 to 14 DPI. The experiment wasperformed in three independent biological replicates.
(B) Transcriptional regulation of the key genes involved in the process ofDNA synthesis and histone modiﬁcation between wild-type SG200- andSG200Dsee1 (mutant)-infected seedlings at 6 DPI. Hierarchical cluster-ing was performed by the Partek Genomics Suite version 6.12 to visu-alize the expression of maize genes transcriptionally regulated at 6 DPI Figure 3. U. maydis Induces DNA Synthesis in Infected Maize Seedlings.
by U. maydis strain SG200 (bottom), infection by SG200Dsee1 (middle),and mock inoculation (top). The x axis depicts clustering of the micro- (A) Maize seedlings were infected by U. maydis wild-type strain SG200, array samples for each of the three biological replicates for each treat- and then tissue was incubated in EdU to visualize in vivo DNA synthesis ment. The y axis shows clustering of the regulated maize transcripts in the host cells. Samples were imaged at 2 and 4 DPI by confocal mi- based on the similarity of their expression patterns. red, upregulated croscopy. Left, at 2 DPI, the fungal proliferation was observed sub- genes; green, downregulated genes; black, not signiﬁcantly altered. LRR, epidermally; host cells adjacent to fungal hyphae were considered to be Leu-rich repeat.
colonized cells (white arrowheads). No EdU incorporation was observed.
Right, at 4 DPI, numerous colonized cells showed EdU labeling (greenstain), indicating the onset of DNA synthesis in host cells (yellow ar- functionally linked with the action of See1. To test this, we in- rowheads). Bars = 75 mm.
cluded two additional strains. First, leaves were infected with wild- (B) Cell division events were observed in maize seedlings infected byU. maydis wild-type strain SG200 at 4 and 5 DPI. EdU incorporation into type strains of the maize head smut fungus Sporisorium reilianum, a cell will result in equally labeled contiguous daughter cells after cell a close relative of U. maydis. S. reilianum also establishes a bio- division. Such equally labeled cell pairs were readily observed in SG200- trophic interaction with maize, but it causes visible symptoms only infected seedling leaf tissue. The white arrowheads point to fungal hy- in the inﬂorescences, never in leaves (Schirawski et al., 2010).
phae associated with maize cells undergoing cell division. It is inferred Strikingly, at 4 DPI, the leaves infected with S. reilianum lacked that reactivation of the cell cycle and rapid divisions are responsible for detectable DNA synthesis, although dense tissue colonization was tumor formation. Bars = 25 mm. 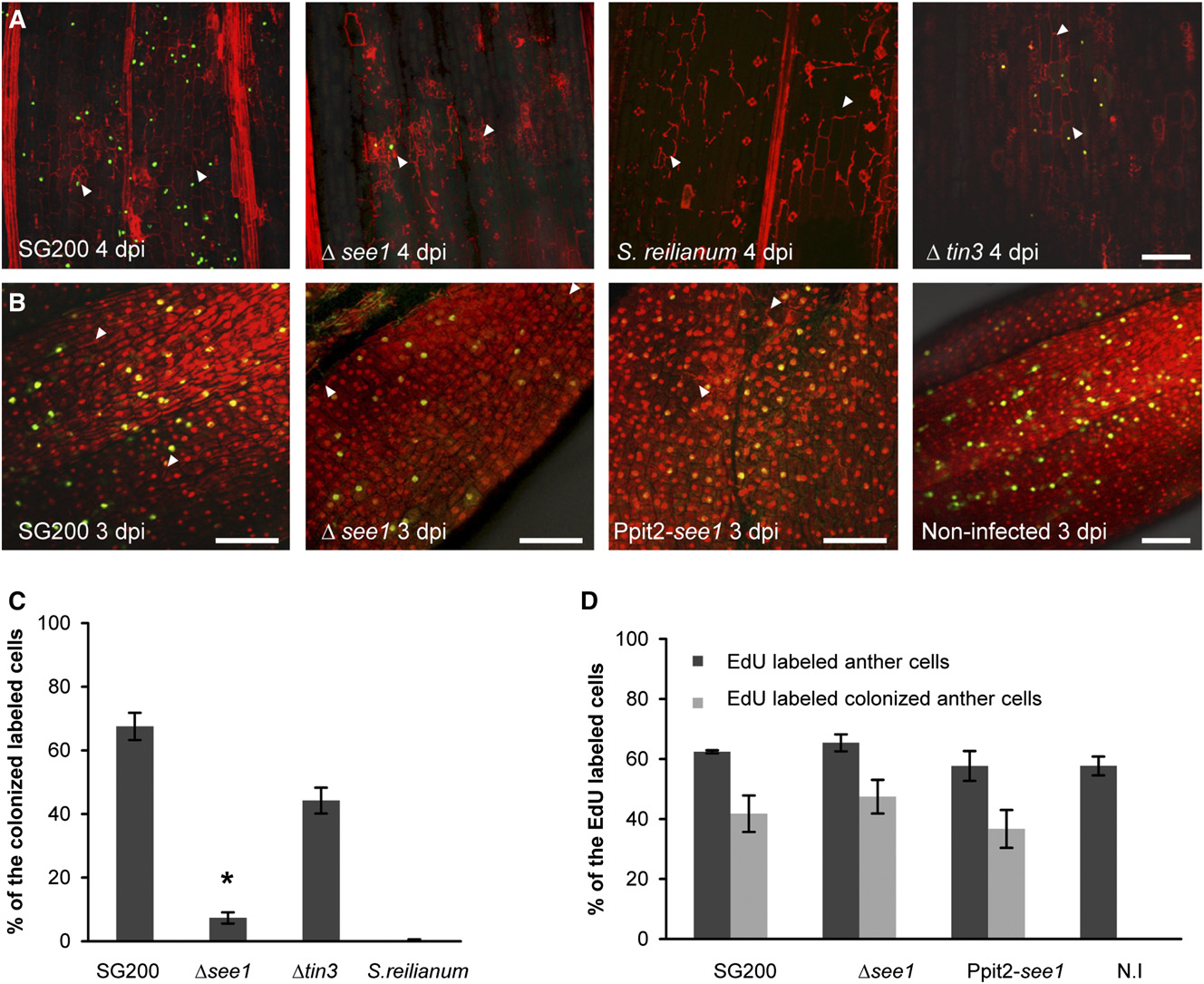 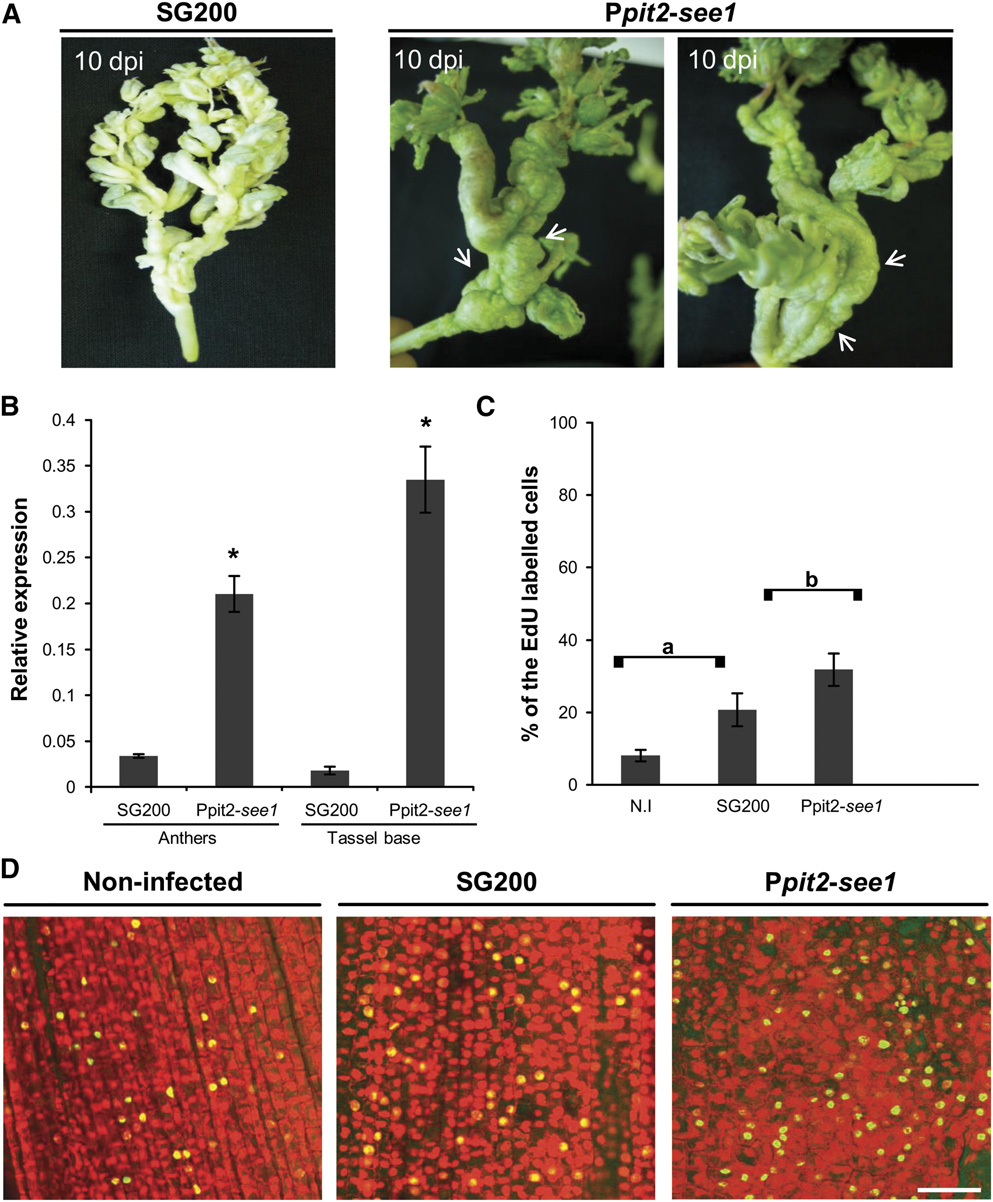 Tumor Induction by Ustilago maydis Figure 5. Overexpression of see1 Results in Tumor Proliferation in Vegetative Tassel Parts.
(A) Tassel base abnormality occurs much more frequently with constitutive overexpression of see1 in comparison with the wild-type strain SG200.
Tumor formation in the tassel base is indicated by the white arrows.
(B) Quantiﬁcation of see1 gene expression in tassels infected with the overexpressing strain Ppit2-see1 in comparison with plants infected with the wild-type SG200 strain. Error bars show SE. *P # 0.001.
(C) Quantiﬁcation of EdU-labeled tassel base cells in the in vivo DNA synthesis assay after infection with the See1-overexpressing strain Ppit2-see1 incomparison with either the wild-type SG200 infected or noninfected (N.I) tassels. There was a signiﬁcant difference in the number of EdU-labeled nuclei inthe abnormal tassel base region as compared with the wild-type SG200 infected or noninfected tissue. Error bars show SE. Comparisons a and b, P # 0.05.
(D) Detection of in vivo DNA synthesis in the tassel base colonized by See1-overexpressing strain Ppit2-see1 in comparison with tissue colonized bywild-type strain SG200 and noninfected tissue. The total nuclei were visualized by PI staining (red), and the EdU-labeled cell nuclei were visualized byAF488 staining (green). Bar = 50 mm.
biotrophic interface, in plant cytoplasm, and prominently inside found in the biotrophic interface. Only See1-3xHA was quan- plant cell nuclei (Figure 6C; The dis- titatively detected inside host cells, with ;20% of particles tribution of gold particles was quantiﬁed for all constructs.
localizing to maize nuclei (Figure 6D). These results conclu- While all the encoded proteins were found inside fungal cells, sively demonstrate the translocation of See1 from biotrophic only the two proteins with N-terminal secretion signals were fungal hyphae into maize cytoplasm and nuclei. 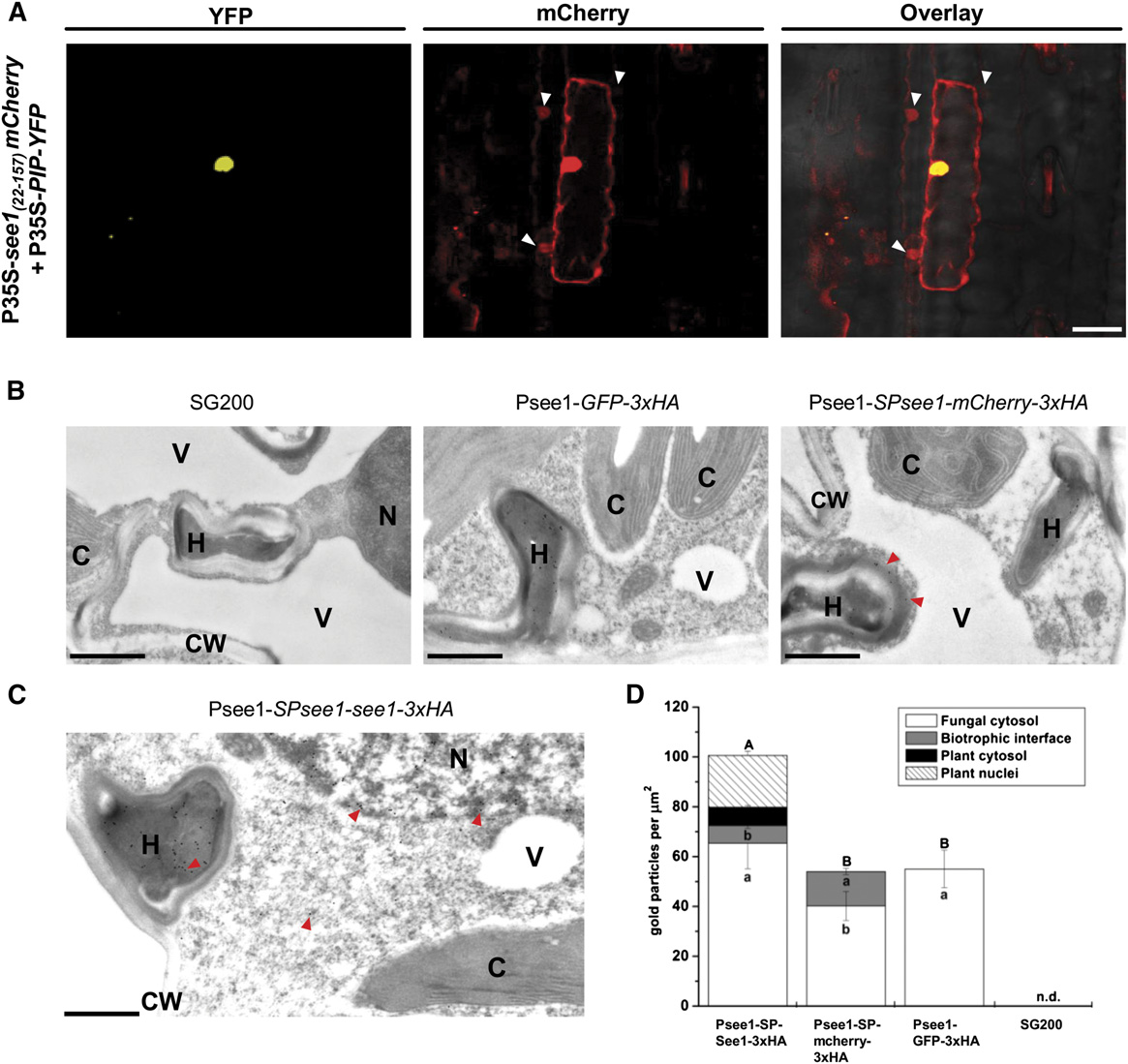 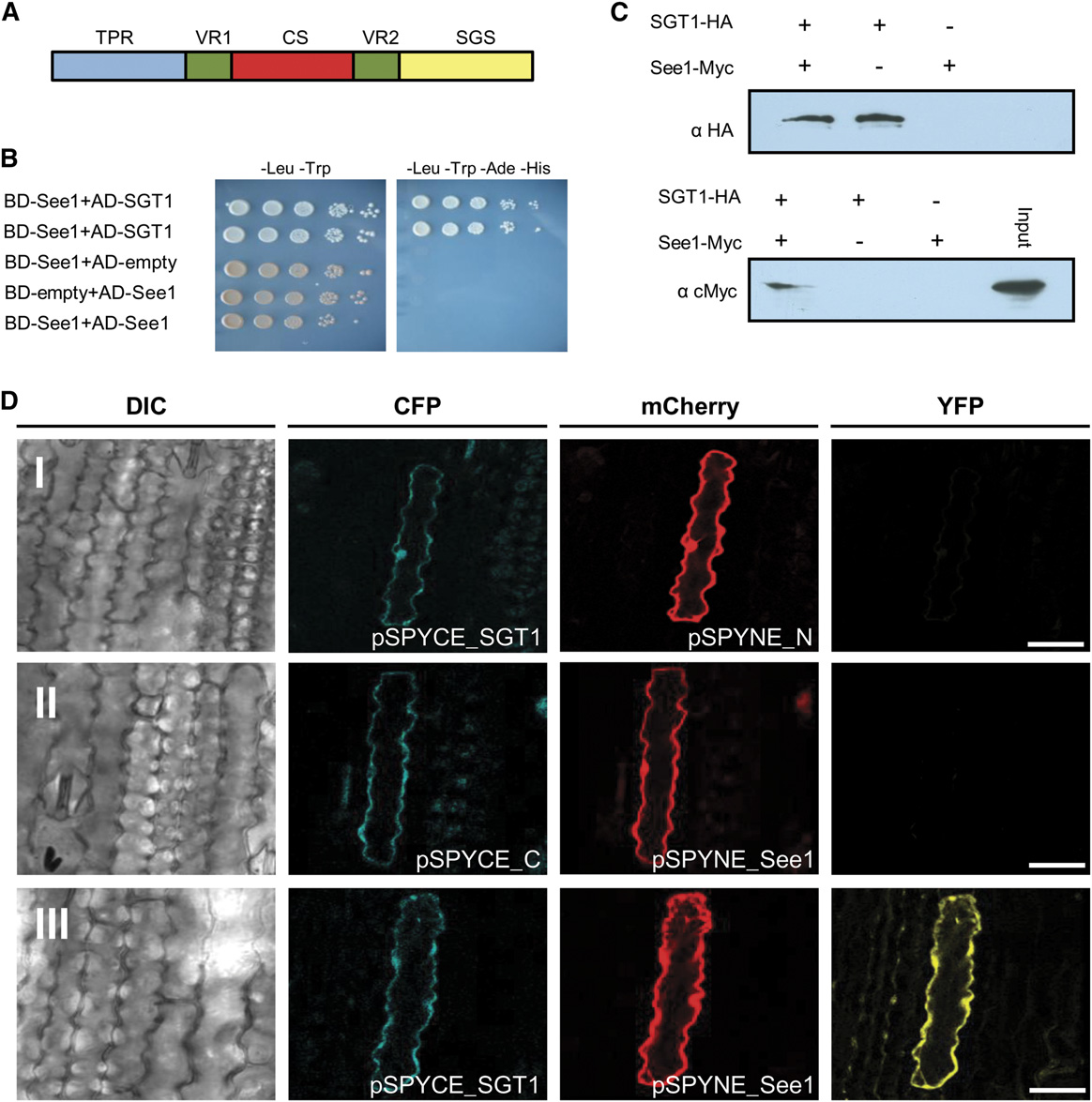 Figure 7. See1 Interacts with the Cell Cycle and the Immune Response Modulator SGT1.
(A) Domain structure of maize SGT1 depicting three important domains: TPR, CS, and SGS. The two variable regions (VR1 and VR2) in the protein arespecies-speciﬁc.
(B) Yeast two-hybrid experiment to test for the interaction of See1 and maize SGT1. The drop assay was done by serial dilutions (see Methods), andstrains were tested on low- and high-stringency plates to check for the speciﬁcity of the interaction. Results were documented after 4 d.
(C) Coimmunoprecipitation shows the interaction of See1 and SGT1 fusion proteins isolated from transiently expressing N. benthamiana cells. SGT1was tag puriﬁed, and See1 was pulled down. In the absence of SGT1, no See1 signal was detected.
(D) In vivo interaction of See1 with SGT1. Confocal images show maize epidermal cells expressing BiFC constructs. Row I shows a plant cellcoexpressing pSPYCE-SGT1 and pSPYNE-mCherry. Blue and red channels show cytoplasmic colocalization of the respective signals. No comple-mentation of ﬂuorescence is observed in the YFP channel. Row II shows the coexpression of pSPYCE-CFP and pSPYNE-See1. Blue and red channelsshow cytoplasmic colocalization of the respective signals. No complementation of ﬂuorescence is observed in the YFP channel. Row III shows a cellcoexpressing pSPYCE-SGT1 and pSPYNE-See1. Both signals colocalize in the nucleus and cytoplasm. The YFP channel exhibits YFP ﬂuorescencereﬂecting the direct interaction of See1 and SGT1. DIC, differential interference contrast. Bars = 25 mm.
shown in the SIPK activated by a positive control, a nonspeciﬁc substrate, myelin basic protein MEK2DD was able to phosphorylate Zm-SGT1 (lane 1). In the lane 3), was used; this protein was in- negative control, which did not contain SIPK, we did not observe tensively phosphorylated in our assay. Collectively, from these any phosphorylation of Zm-SGT1, and the signal detected cor- results, we conclude that SIPK from tobacco (Nicotiana tabacum) responded to MEK2DD (, lane 2). As can phosphorylate Zm-SGT1 in planta or in vitro and, therefore, 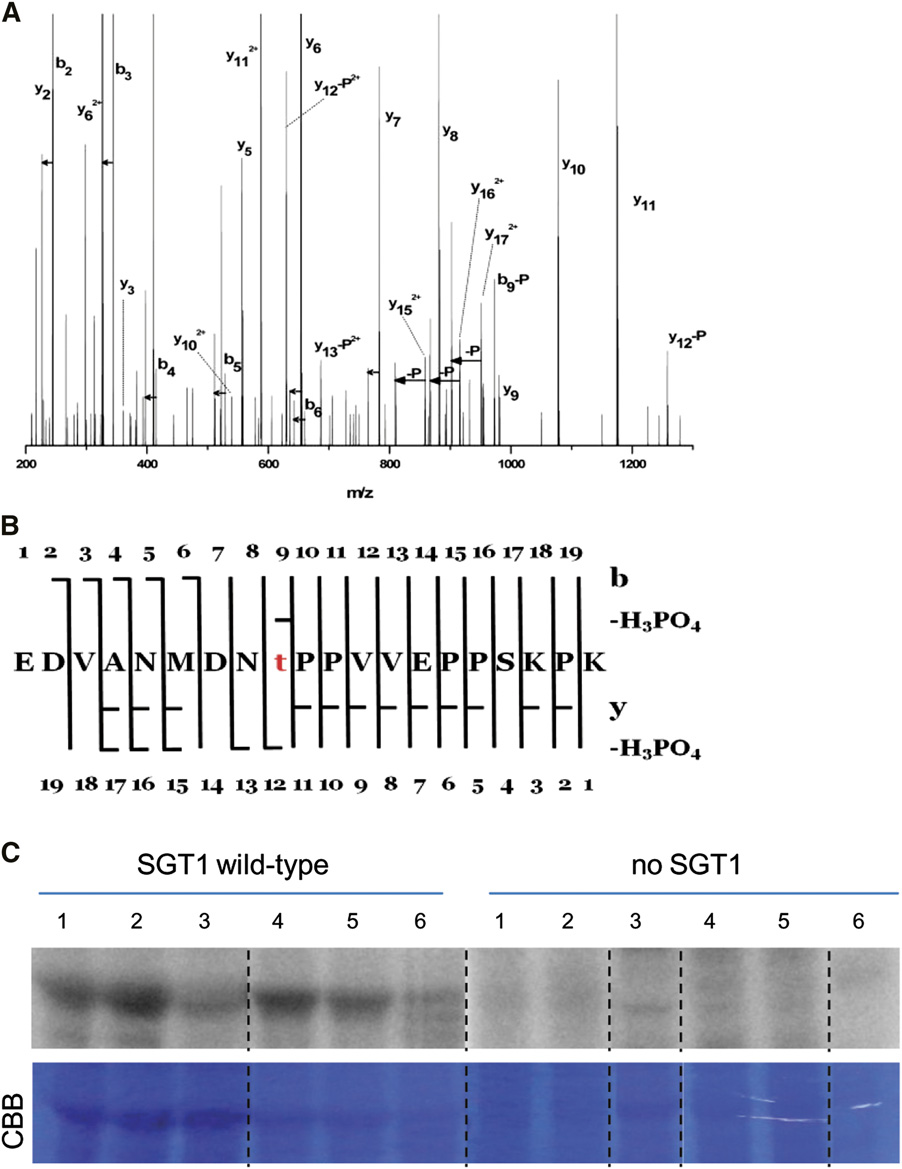 The Copyright in this manual vests exclusively with The Titan Trust. All rights are reserved.No part of the manual may be modified, added to, reproduced, transmitted, transcribed,stored in a retrievable system or translated into any language in any form or by any means,electronic, mechanical, magnetic, optical, chemical, manual, or otherwise, in whole or inpart, without the prior consent of The Titan Trust. Any unauthorised use of this manual, inwhole or in part, will result in legal action being taken against such user.