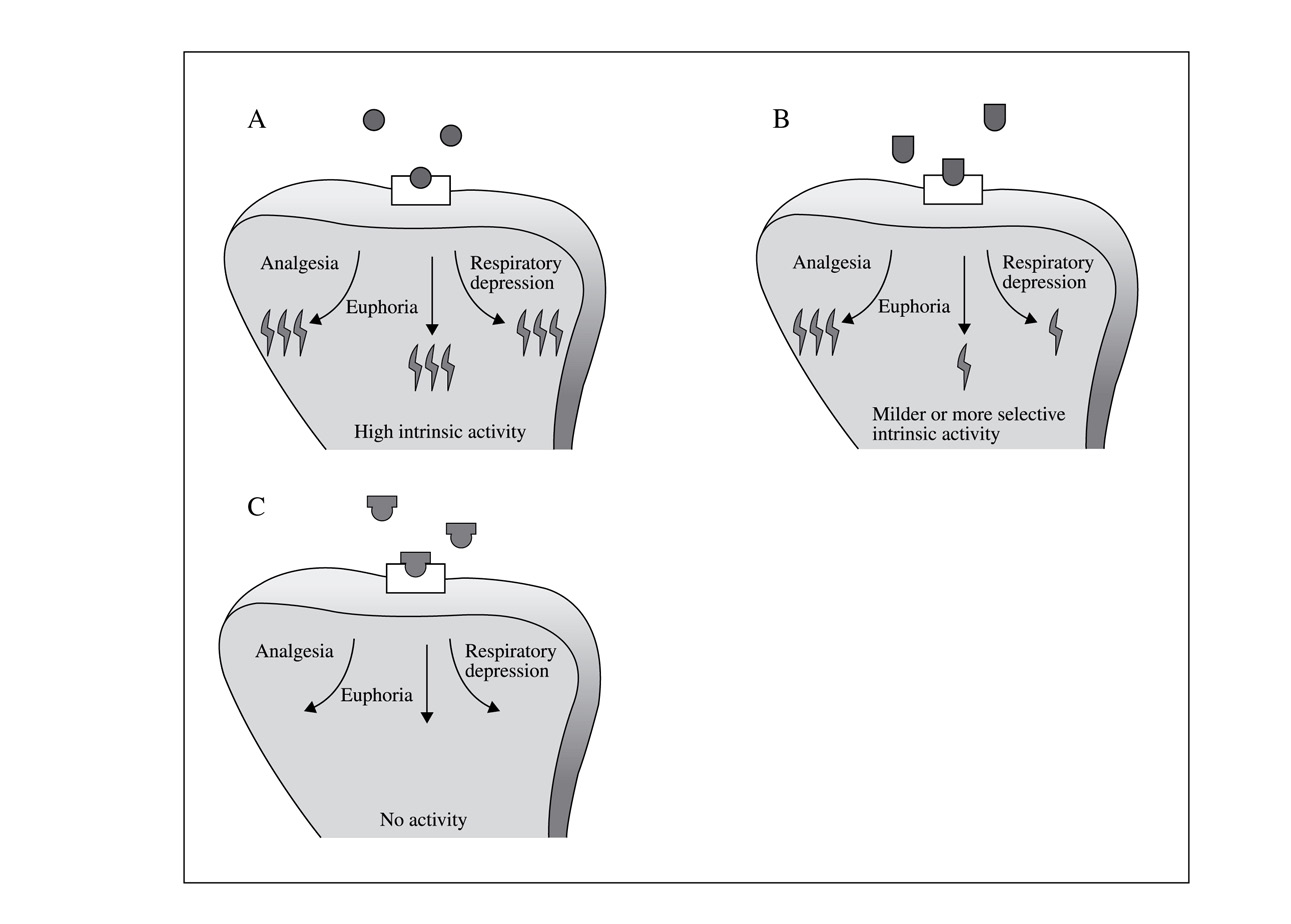 I. Maremmani et al.: Basics on Addiction: a training package for medical practitioners or psychiatrists who treat opioid dependence Table 4: Clinical features of opioid intoxication and
Drowsiness, stupor or coma Symmetric, pinpoint, reactive pupils Decreased peristalsis Skin cool and moist Hypoventilation (respiratory slowing, irregular breathing, apnea) Reversal with naloxone Figure 1: Action of opioid agonists, antagonists
Anxiety, restlessness and partial agonists. A: Opioid agonist; B: Opioid
partial agonists; C: Opioid antagonists
Chills, hot flushes tem and at interneurones in the dorsal horn areas. Myalgias, arthralgias These areas are involved in pain transmission or perception and the endogenous opioids are Abdominal cramping Vomiting, diarrhoea thought to be the body's natural pain-relieving chemicals, which act by enhancing inhibitory ef- fects at opioid receptors. Opioid drugs elicit their Tachycardia, hypertension (mild) effects by mimicking the actions of the endog- Hyperthermia (mild), diaphoresis, lacrimation, enous opioids on opioid receptors [13].
Spontaneous ejaculation 2.2. Chronic opioid use: tolerance, physical de-
pendence and addiction
for effects such as constipation and miosis [85].
When the drug is stopped or when its effect 2.2.1. Effects of chronic opioid exposure
is counteracted by a specific antagonist [80], un- pleasant physical effects occur, which indicates Although possessing valuable properties (e.g., the occurrence of the withdrawal (abstinence) analgesia), repeated and chronic exposure to syndrome. Withdrawal symptoms generally rep- opioids can lead to development of tolerance and resent physiologic actions opposite to the acute physical dependence. The rate of development of actions of opioid drugs. For example, pupillary tolerance varies from one opioid to another.
constriction and constipation occur with opiate Tolerance describes the need to progressive- use, whereas pupillary dilatation and diarrhoea ly increase the drug dose to produce the effect occur in the withdrawal state [54]. The most originally achieved with smaller doses, following common symptoms of opioid intoxication and repeated exposure to opioid agonists. It may de- withdrawal are shown in Table 4. Individuals velop at different rates for the different effects of who abruptly stop taking morphine are extremely opioids and can occur over days, weeks or years restless and distressed and have a strong crav- [90]. Tolerance develops to the analgesic and ing for the drug. Although not life-threatening, euphoric effects of opioids, and to some of the opioid withdrawal is associated with severe psy- adverse effects such as respiratory depression, chological and moderate physical distress [54]. nausea and sedation, but does not fully develop The onset of withdrawal symptoms typically Heroin Addiction and Related Clinical Problems 13 (2): 5-40 Figure 2: Experience of the opioid-dependent individual depending on opioid
concentrations in the body. Reproduced with permission from Newman et al.,
1995 [78]
occurs 8–16 hours after cessation of the use of diction, and it is also referred to as ‘psychological heroin or morphine, with autonomic symptoms dependence' [86].
appearing first. By 36 hours, severe restlessness, piloerection, lacrimation, abdominal cramps and 2.2.2. Criteria for opioid dependence/addiction
diarrhoea become apparent. Symptoms reach their peak intensity at 48–72 hours and resolve The key criteria indicating that an individual over 7–10 days [54]. However, negative mood is addicted is when they no longer have control states and craving may persist for up to 2 years over their drug use and demonstrate a persistent after abstinence [37, 69]. Symptoms experienced change in reward-seeking behaviour, with an irre- by the opioid-dependent patient depend on the sistible desire to repeat the drug experience or to concentration of opioids in their body and their avoid the discontent of not having it. Such an in- own individual levels of tolerance: the patient stinctive drive is contrary to the person's declared will experience euphoria when the concentration intentions and underlies relapsing behaviour (re- of opioids in the body exceeds the tolerance level cidivism). It is the key aspect of addiction, and and will experience withdrawal symptoms when is also referred to as ‘psychological dependence' the concentration of opioids in the body is below [86]. A joint statement by the World Health Or- the dependence level. When the opioid concen- ganization (WHO), the United Nations Office on tration is in between these two levels the opioid- Drugs and Crime (UNDOC) and the Joint United dependent patient will look and feel normal (Fig- Nations Programme on HIV/AIDS (UNAIDS) ure 2) [78]. Evidence of tolerance/withdrawal is defines the key elements of opioid dependence as termed ‘physical dependence', although it is not a follows: a strong desire or sense of compulsion constant or exclusive feature of addiction. Addic- to take opioids; difficulties in controlling opioid- tion manifests with a persistent change in reward- taking behaviour; a withdrawal state when opioid seeking behaviour, with an irresistible desire to use has ceased or been reduced; evidence of tol- repeat the drug experience or to avoid the discon- erance, such that increased doses are required to tent of not having it. Such an instinctual drive is achieve effects originally produced by lower dos- contrary to the person's declared intentions and es; progressive neglect of alternative pleasures or underlies recidivism. It is the key aspect of ad- interests; and persistence with opioid use despite 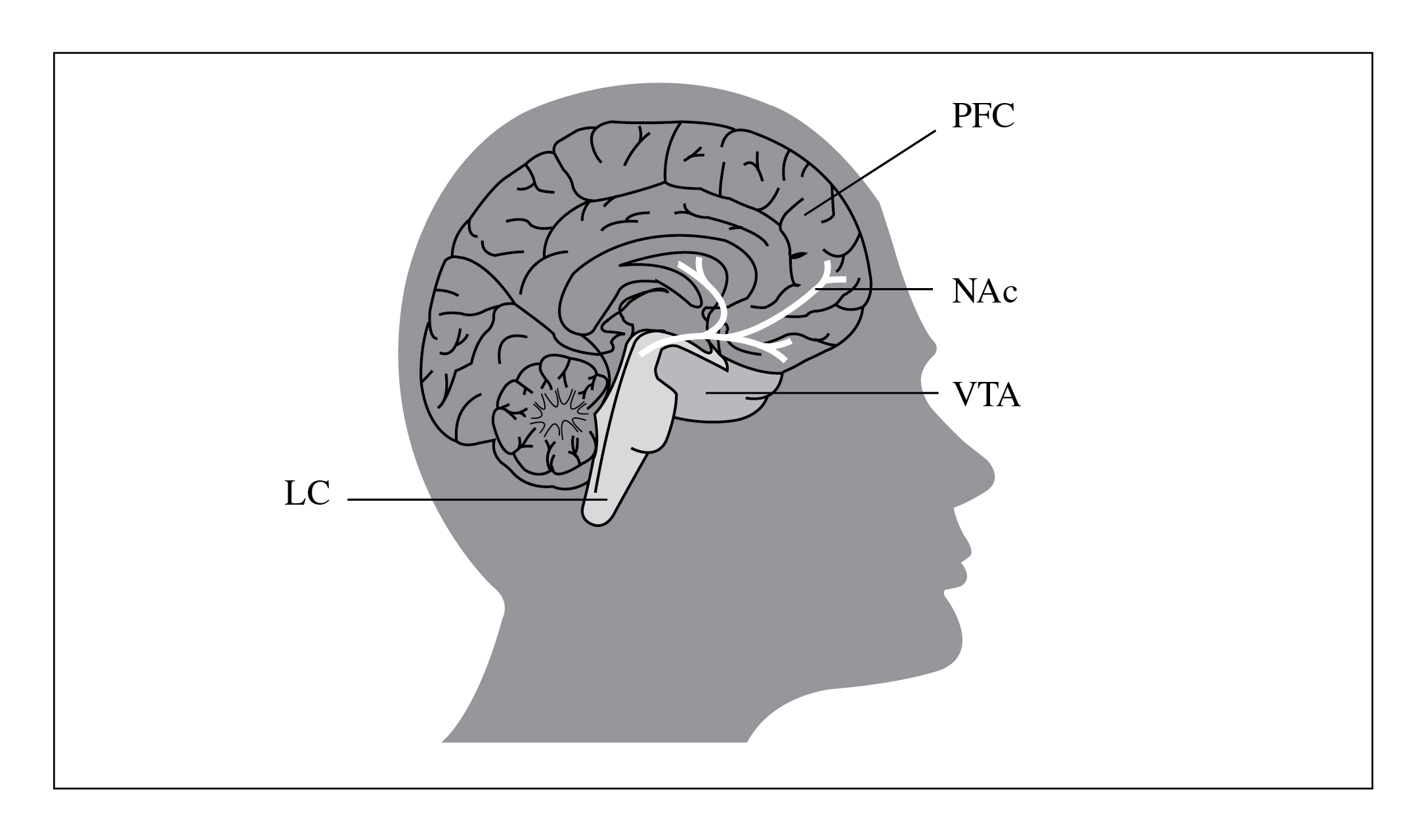 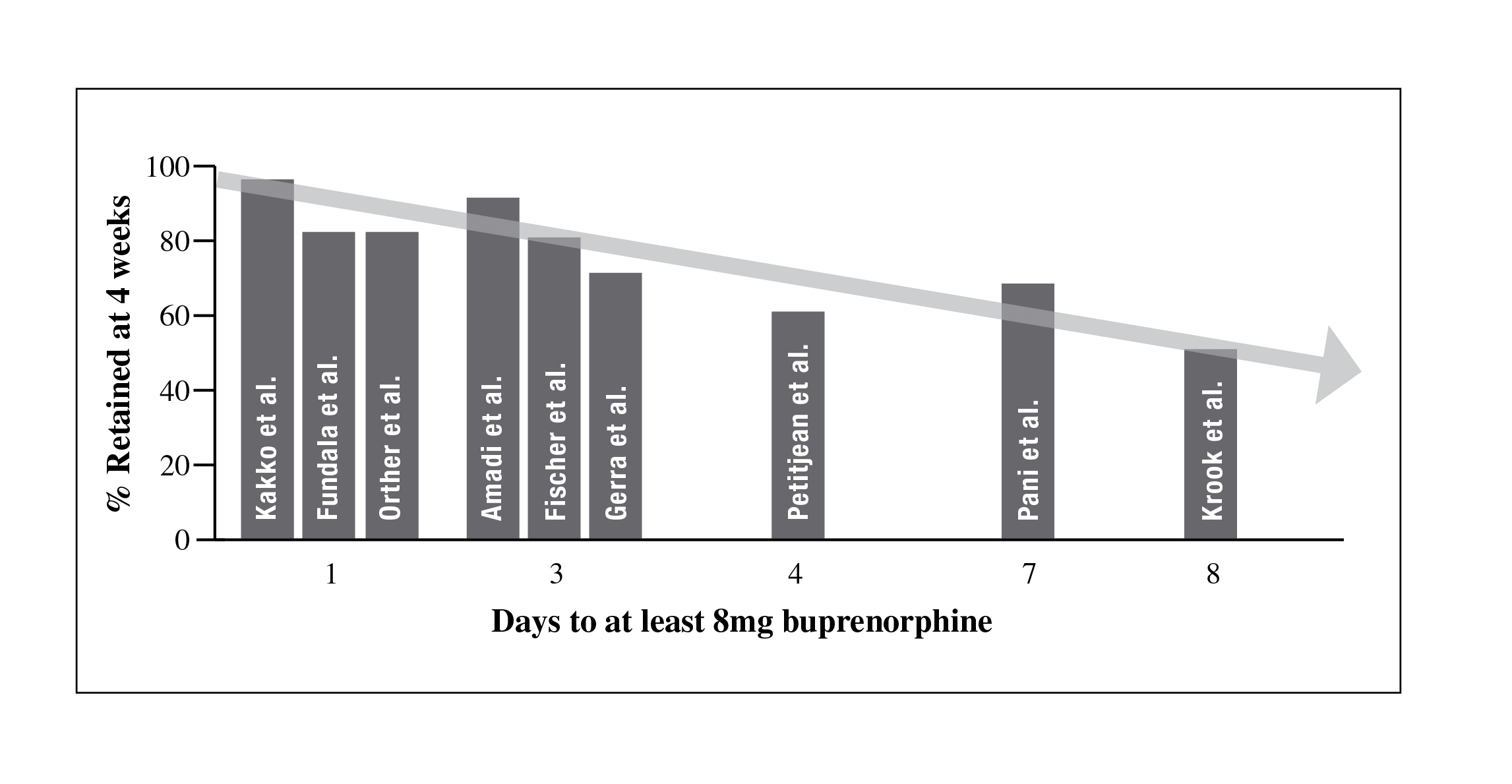