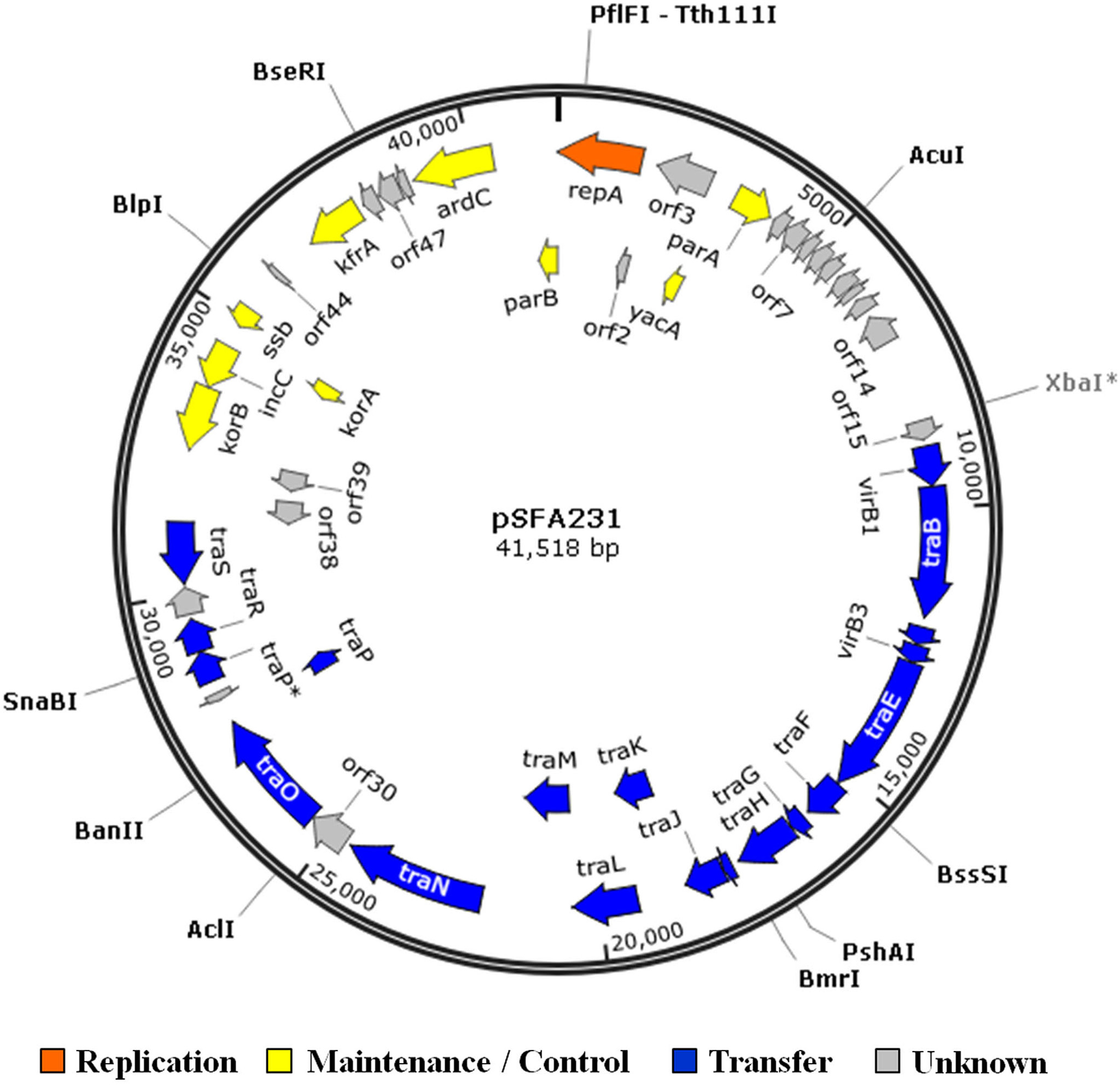 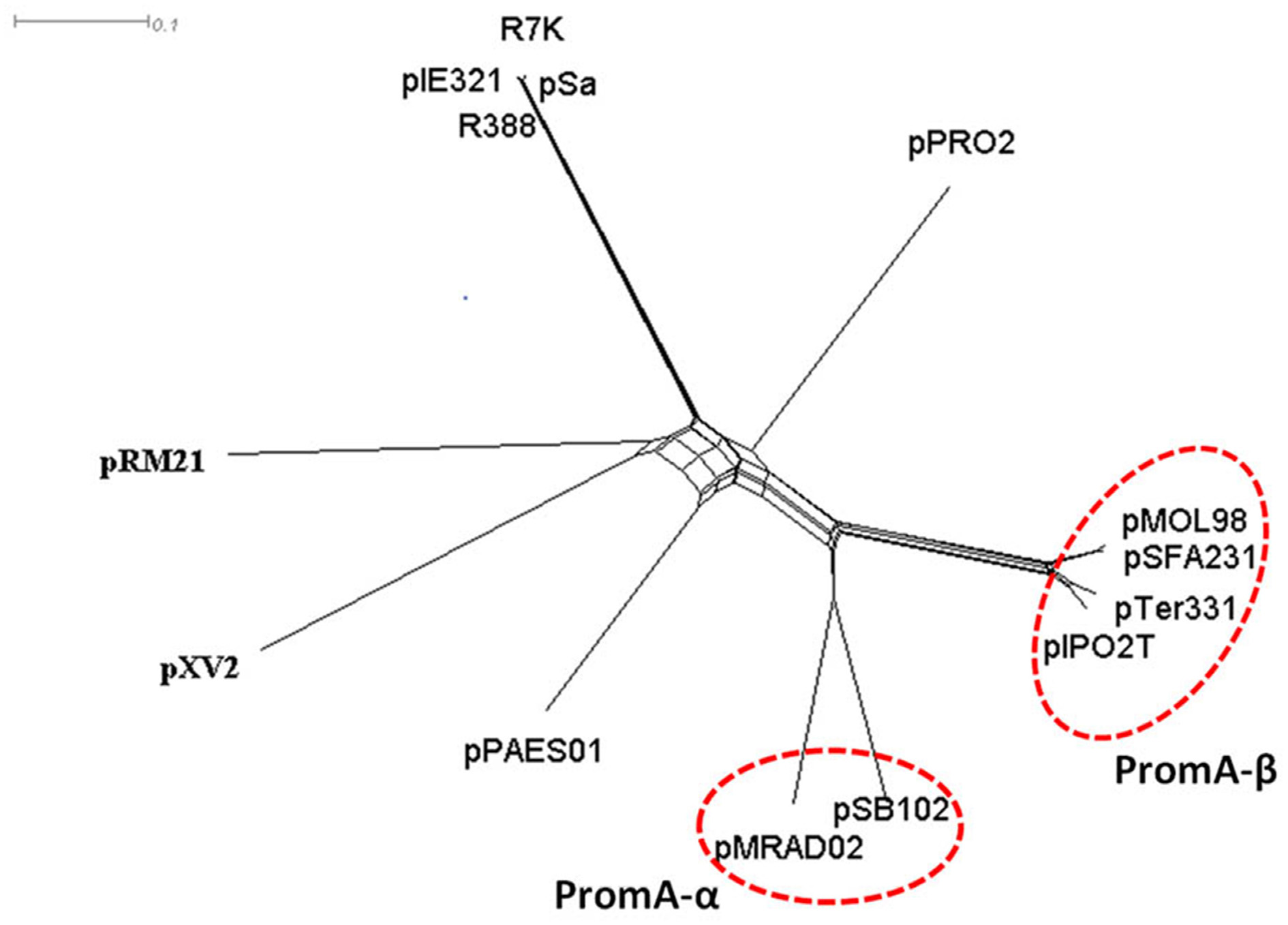 PromA plasmid from contaminated habitat FIGURE 2 Phylogenetic network of RepA proteins of selected IncW and PromA plasmids, using the neighbor joining algorithm on protein distances
with Poisson correction.
Phylogenetic distance (amino acid difference percentage) was indicated by the length of the tree branches and the scale bars.
almost entirely unrecognizable on pSB102 and pMRAD02. The in pSB102; traG in pMRAD02; traP in pMRAD02; korB in presence and absence of specific backbone genes are most likely pIPO2T; incC in pIPO2T; and korA in pTer331, pIPO2T, and the result of insertions and/or deletions.
pMRAD02) were defined as hypothetical proteins, the corre- To evaluate the evolutionary history of the backbone regions, sponding genes are present in these plasmids, allowing us to the pairwise genetic distances among the PromA plasmids were include them in our comparative genomic analysis. A phylo- calculated based on the amino acid (AA) sequences of each back- genetic tree constructed from the concatenated DNA sequence bone protein using the Jones-Taylor-Thornton method (Table showed that pSFA231 is most similar to pMOL98, then to pIPO2T S1). The AA similarity differed across the 6 plasmids. Among all and pTer331, but is phylogenetically divergent from pSB102 and the 5 known PromA plasmids, pMOL98 had the closest genetic distance to pSFA231 with respect genes of traC, virB3, traE, traH, We also performed a phylogenetic analysis using six con- traI, traJ, traK, traR, incC, korA, and ssb. In contrast, almost all catenated backbone gene products (Figure S1), namely, RepA, the pMRAD02 backbone proteins showed the greatest genetic dis- TraB, TraE, TraN, TraO, and KorB. Not surprisingly, the results tance to our newly isolated plasmid pSFA231, except the traQ and are consistent with those based on the entire backbone regions, traR. As for the plasmid pTer331, genes yacA, parA, virB1, traC, indicating that to simplify the process of comparative genomic traM, traO, korB, and kfrA presented the closest, while genes traP, analysis we can choose gene products with relatively large size and traQ, traR, and parB presented the greatest genetic distance to high level of synteny as targets for comparison.
To further reconstruct their evolutionary history, the phyloge- THE ACCESSORY REGIONS AND TRANSPOSONS OF THE PromA
netic analysis of the whole backbone regions, which are conserved and present in all 6 plasmids, was performed. It was observed that One cluster of hypothetical orfs (orf6-orf15) with unknown func- the gene coding for protein TraS is absent in plasmids pTer331 tions was detected between parA and traA of the PromA mem- and pIPO2T, and plasmids pSB102 and pMRAD02 are lacking in bers. Interestingly, we found that this gene cluster shows high the genes coding for proteins KfrA and ParB (Table S1). Thus, DNA similarity with the corresponding regions on pMOL98 the traS gene sequence and the DNA sequences from kfrA to parB (97%), pIPO2T (95%), and pTer331 (95%), inferring that these were excluded from the alignment, leaving two large backbone genes (or some of them) may also be part of the common back- regions. One region contains 21 continuous genes, organized bone of PromA-β sub-clade, although we still lack direct evidence.
from repA to traR, while the other region includes genes korB, While transposons Tn5178 and Tn6048 were found to be inserted incC, korA, and ssb. Although the amino acid sequences trans- between yacA and parA gene on plasmids pSB102 and pMOL98, lated from the counterparts of backbone genes in selected PromA respectively. No transposon was detected in the corresponding plasmids (gene yacA in pMOL98, pSB102, and pMRAD02; parA region on our plasmid pSFA231, nor on pTer331. 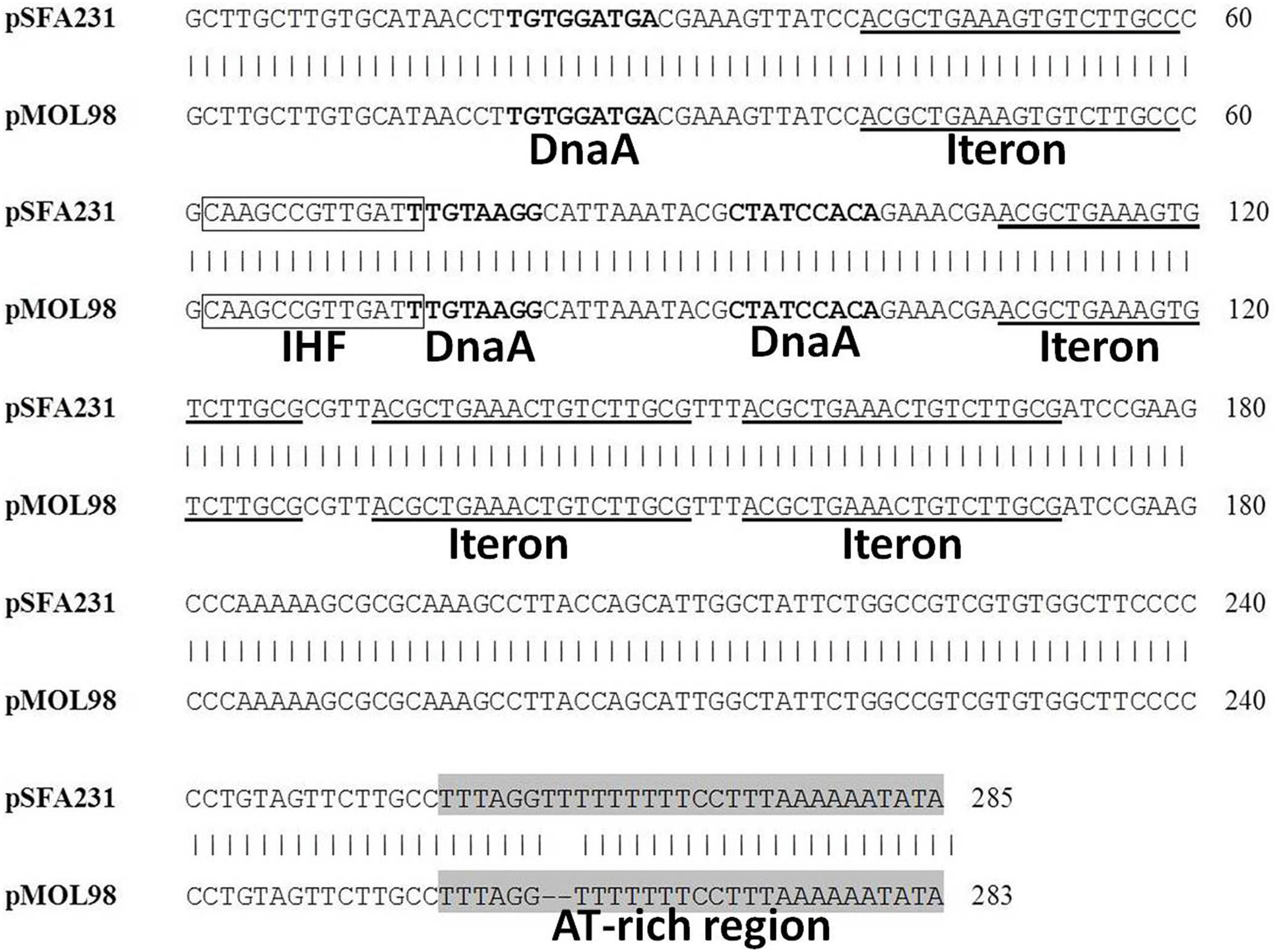 PromA plasmid from contaminated habitat FIGURE 3 Alignment of the pSFA231 replicative origin region with the putative oriV regions of pMOL98. DnaA refers to DnaA boxes, IHF refers to
putative Integration Host Factor binding sites.
opportunities for cell contact and therefore transfer of mobile In the present study, a new BHR plasmid pSFA231 was iso- genetic elements. Moreover, BHR plasmids are frequently cap- lated from a sediment sample collected from a petroleum- tured from contaminated environmental samples wastewater irrigation channel, using the triparental exogenous BHR plasmids play an important role plasmid capture method. It was recommended that choosing in the adaptation of bacterial populations to pollution stress, and donor and recipient strains that are phylogenetically distinct long-term contamination may induce horizontal gene exchange will increase the possibility of obtaining plasmids with a broad and reshuffling of genetic information between phylogenetically host range In our analysis, we also tried the distinct prokaryotes ). With long-term donor/recipient system of E. coli DH5α (pSU4814)/C. necator exposure to petroleum contamination, the Shen-fu wastewater JMP228 (β-Proteobacteria, RifR), but no self-transmissible BHR irrigation zone likely provides a natural pool of BHR plasmids.
plasmids were isolated from the same sediment sample (data not Actually, a set of diverse BHR plasmids were captured from shown). Although the plasmid pSFA231 was isolated by using a dozens of samples collected from Shen-fu irrigation zone in donor and recipient that both belonged to the same subgroup our experiment (unpublished data), including 4 IncP-1ε plas- of Proteobacteria, further host range test showed that pSFA231 mids, 2 unknown plasmids, together with the PromA plasmid could successfully self-transfer and replicate in α-, β-, and γ- reported in this study. We expect an increasing number of phylo- genetically diverse self-transmissible plasmids would be identified Sediments are likely important reservoirs of BHR plasmid from this region by trying different capturing methods, such as biparental mating method or endogenous plasmid isolation The rich biofilm structures in sediments ). Unexpectedly, in contrast to the BHR plas- ) may provide the bacteria more mids isolated from sludge collected from wastewater treatment 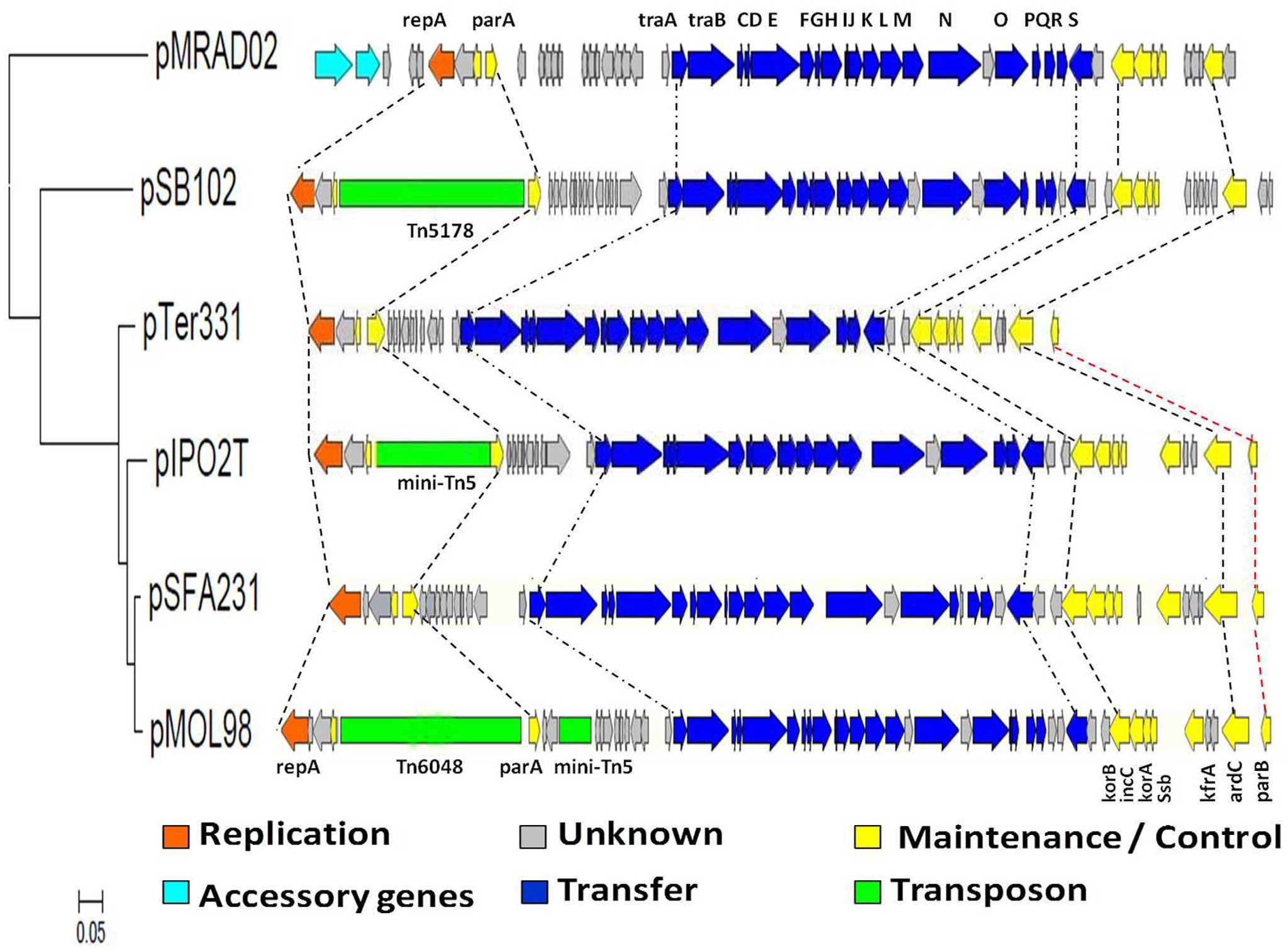