SAOJ Autumn 2010 2/18/10 2:58 PM Page 37 SA ORTHOPAEDIC JOURNAL Autumn 2010 / Page 37
The medical management of spinal
R Dunn MBChB(UCT), MMed(UCT), FCS(SA)Orth
Consultant Orthopaedic and Spine Surgeon, Associate Professor University of Cape Town, Head
Orthopaedic Spine Services: Groote Schuur Hospital
Prof Robert Dunn
Tel: (021) 404-5387
Fax: (021) 404-5389
Abstract
The overall prevalence of spinal tuberculosis (TB) in South Africa is currently 948 per 100 000. All trends are
upward, including incidence of sputa positive cases, relapses and retreatment rates, as well as new extra-pul-
monary cases. This is driven by the co-existent HIV endemic and the effect of HIV on TB re-activation.1
Autopsy studies confirm that 30-40% of HIV-positive patients die of TB and 44% of TB patients have HIV.2
Musculoskeletal manifestations of TB are more frequent in the HIV host, reported as high as 60% compared to
the normal 3-5% incidence.3
TB is largely a public health issue and will only be controlled when the problems of abject poverty such as malnutrition, overcrowding and early access to medical care is improved. To this end it is notifiable by law inan effort to allow preventative measures to be effected.
TB spine represents about 1% of overall cases but places a large demand on resources due to the costs of para- plegia and tertiary level care. Although surgery is indicated in selected cases, medical care remains the key com-ponent. Medical care involves both the diagnostic process and the medical intervention by means of supportivecare and anti-tuberculous chemotherapy. Diagnosis of TB spine
False negatives occur due to immunosuppression from The presenting complaints are usually axial back pain and HIV, cytotoxics or even overwhelming TB infection.
may be associated with neurological deficit. The presen-tation is typically delayed due to the insidious nature of the disease as well as the poor access to care in the com- Sputum is frequently used to diagnose pulmonary TB by munity it frequently affects.
the presence of acid-fast bacilli (AFB). The yield isdependent on the number of serial tests, whether direct Tuberculin skin tests
staining or concentrated methods are employed as well as Intra-dermal skin testing to elicit an inflammatory the method of collection (Table I).4 Expectorated sputum response has been widely used. These include the is positive in 55%, induced sputa 38% and lavage 26%.5 Mantoux, Heaf and Tine tests. They are relatively inex-pensive and technically easy to administer. Unfortunately they need to be read at a definite point following inocula- The white cell count is typically normal and the ESR tion. This may lead to inaccuracies if the patient does not markedly raised. It averages in the 80's but may often return at the prescribed time. There are false positive exceed 100 mm/hour.3 There may be anaemia of chronic results due to patients being sensitised by BCG vaccina- disorder or related to the malnutrition. Likewise the albu- tion or exposure to environmental mycobacterium. min is reduced. 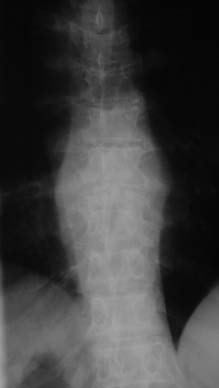 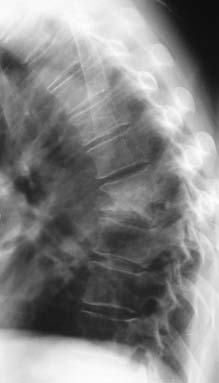 SAOJ Autumn 2010 2/18/10 2:58 PM Page 38 Page 38 / SA ORTHOPAEDIC JOURNAL Autumn 2010
There is vertebral body destruction with a focal kyphosis Table I: Accumulative positive rates from
(Figures 2 and 3). Typically at least two bodies are sputa for acid-fast bacilli if the culture is involved, with juxta-discal endplate destruction and col-
lapse. There may be preservation of the disc space in theearly phase.
No. of daily samples CT and MRI are useful to further delineate bony destruction and soft tissue elements especially in the case of neurological abnormality (Figure 4). Non-contiguous infection is as high as 16% and a full length MRI scout isrecommended.8 If not possible, full spine X-rays should Newer tests
be employed.
Selective immunological tests are being developed.6 TB Nuclear scintigraphy (bone scan) may be useful to detect antigens induce early secretive antigen 6. This can be test- other non-contiguous lesions, both in the spine and limbs. ed on blood in the laboratory. It is not influenced by BCGor other mycobacteria.
Nucleic acid amplification by polymerase chain reaction (PCR) is possible in a few hours but requires strong labo-ratory capacity and is relatively expensive. It is not possi-ble to distinguish between live and dead mycobacteria.
There is a high specificity but variable sensitivity and itshould therefore be used in conjunction with other data.
The PCR technique can be used to identify drug resist- ance rather than wait for the definitive culture and sensi-tivities.
Culture
Traditionally mycobacterium is cultured using the
Lowenstein-Jensen slope or broth media. This takes 2-4
weeks if microscopy is positive and up to 8 weeks if
microscopy is negative. Newer techniques (BACTEC)
may reduce culture times by earlier recognition of bacte-
rial growth.
Figure 1: Chart depicting the incidence of
positive results for each diagnostic modality
employed in the author's cohort (unpub-
The presence of caseous granuloma with AFBs is diag- lished data)
nostic. Granuloma on its own is suggestive and the diag-nosis is dependent on the clinical context.
Patients are frequently initiated on anti-TB medication prior to diagnostic confirmation by primary care physi-cians. Thus the presence of AFBs on staining and positiveculture results are reduced. In these cases the histologicalresults are often the only confirmation. It is important toutilise all diagnostic modalities available to confirm thediagnosis. Figure 1 depicts the incidence of positiveresults in the author's series (unpublished data). Overall ahigh level of diagnostic confirmation is achieved.
Imaging
The typical features of apical radiographic changes on the
chest X-ray have a positive predictive value of 61% with
67% specificity.7
The features of spine TB are that of paraspinal shadow in the thoracic spine indicating the presence of an abscess.
Figures 2 and 3: AP and lateral thoracic spine
In the lumbar area the pus dissipates in the psoas muscle demonstrating paraspinal abscess and focal
and thus the discrete paraspinal collection is not seen.
kyphosis due to vertebral body destruction 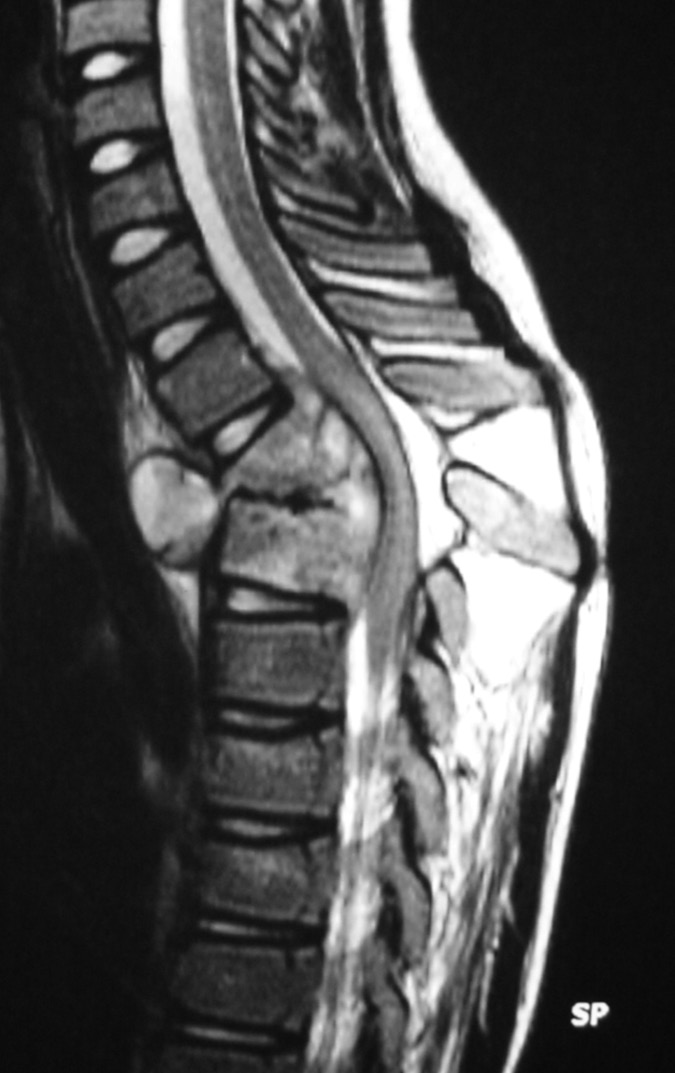