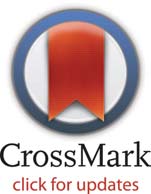 Mesenchymal Stem Cells in MS CI51.1–8.8 vs 12.3, 95% CI54.4–34.5, p50.064), and at the end of study to reduced mean GEL (22.8¡5.9 vs 3¡5.4, p50.075). No significant treatment differences were detected in the secondary endpoints. We observed a non- significant decrease of the frequency of Th1 (CD4+ IFN-c+) cells in blood of MSCs treated patients.
Conclusion: Bone-marrow-MSCs are safe and may reduce inflammatory MRI parameters supporting their immunomodulatory properties.
ClinicalTrials.gov Mesenchymal stem cells (MSCs) also called mesenchymal stromal cells, are bonemarrow-derived stem cells that can be relatively easily isolated from differenttissues, expanded ex vivo and induced to differentiate into mesodermal derivates.
Although MSCs therapies were originally based on the possibility to restoredamaged tissues, MSCs have emerged as a potential therapy for multiple sclerosis(MS) based on other properties than tissue replacement, such as their ability toinhibit pathogenic T and B cell responses and on the release of neuroprotectiveand pro-oligodendrogenic molecules favoring tissue protection and repair Preclinical studies on animal models of MS support both neuroprotection andimprovement of the clinical course after infusion of MSCs Five clinicalstudies on MS patients have shown the safety of the procedure at short-term andpreliminary efficacy results All studies, however, had an open-label design,and differed in the source, dose and way of MSCs administration, andcharacteristics of the series On the basis of the consensus of the ‘‘International Mesenchymal Stem Cells Transplantation Study Group'' (IMSCTSG) on the utilization of MSCs for thetreatment of MS we conducted a randomized, double-blind, crossover,placebo-controlled phase II trial with autologous MSCs transplantation in 9patients with relapsing-remitting MS (RRMS) using a similar protocol (EUDRA-CT: 2009-016442-74).
Patients and Methods The protocol for this trial and supporting CONSORT checklist are available assupporting information; see Checklist S1, Protocol S1 and Protocol S2.
This randomized, double-blind, crossover placebo trial was performed in HospitalClinic of Barcelona, Spain, between November 2010 and June 2012. Patients wererandomized to receive intravenous injection (IV) of fresh bone-marrow-derived PLOS ONE DOI:10.1371/journal.pone.0113936

Mesenchymal Stem Cells in MS MSCs or equivalent volume of suspension media at baseline. At 6 months sincethe first infusion, treatment was reversed (i.e., patients who received initialsuspension media received cryopreserved MSCs and vice versa). Patientsunderwent bone marrow aspiration (80 to 100 ml) from the posterior-superioriliac spine under short general anaesthesia. Treatment sequence (active-control/control-active) was randomized following a computer-generated assignment list(M.A.S. v. 2.1, GSK). All patients and study personal, except for the haematologist(PM) and the nurse involved in the preparation of the dose and administration ofthe infusion, were blind to the treatment assignment at all timepoints, and untilthe last enrolled patient completed the 360-day visit, and all outcome data hadbeen processed.
Eligible participants were those with relapsing-remitting MS not responding to atleast a year of approved therapy, defined by at least 1 clinically documentedrelapse and/or at least 1 gadolinium-enhancing lesion (GEL) on MRI within thelast 12 months, aged 18 to 50 years, disease duration of 2 to 10 years andExpanded Disability Status Scale (EDSS) score between 3.0 to 6.5. Patientswere excluded if they had any active or chronic infection, treatment with anyimmunosuppressive therapy within the previous 3 months or interferon-beta,glatiramer acetate or corticosteroids within 30 days prior to randomization. Allpatients gave written informed consent before study entry and approval wasobtained from the Ethics Committee of Hospital Clinic of Barcelona. The trial wasregistered at ClinicalTrials.gov (NCT01228266) and the official protocol (inSpanish, EUDRA-CT: 2009-016442-74) is accurately described in the methods.
Study procedures and endpoints MSCs were generated under good manufacturing practice conditions withstandard operating procedures. Briefly, the mononuclear cell fraction was isolatedby Ficoll density gradient centrifugation (Ficoll-Paque, GE Healthcare Bio-Sciences, AB). A number between 20–60 millions of mononuclear cells wereseeded per flask (175 cm2) with growth medium, which contained aMEMwithout ribonucleosides (Gibco), 5% platelet lisate, 2 un/ml Heparin, 1% Pen/Strep (Gibco) and 1 ng/ml human fibroblast growth factor (bFGF or FGF-2)(Sigma). The flasks were maintained in culture at 37˚C/5% CO2. The growthmedium was changed every 3–4 days. About 10–15 days later, colonies wereformed. Then the cells were splitted with TrypLE Select (Life Technologies) andseeded at 3000–5000 cells/cm2. The cells were grown to 70–80% confluence andsplitted again. When cellular doses were reached, the cells were resuspended at 10million cells/ml in Ringer Lactate buffer containing 1% Human Albumin.
Previously, the cells were analyzed by flow cytometry to confirm expression ofCD90, CD73 y CD44 and absence of CD34 and CD45 surface markers. The cellswere administrated in the first 24 hours postproduction (baseline) or cryopre- PLOS ONE DOI:10.1371/journal.pone.0113936

Mesenchymal Stem Cells in MS served for reversed administration at 6 months. A dose of 1–26106 MSCs/Kgbody weight or suspension media were slowly infused over 2–4 min through aperipheral venous cannula at baseline. At 6 months, treatment was reversedcompared to baseline and all patients received premedication with 2 mgdexchlorpheniramine, 1 g paracetamol, and 100 mg methylprednisolone toprevent infusion reactions.
Clinical assessmentsClinical assessments were performed at screening, and at randomization(baseline), and study visits, including safety assessments, were scheduled at 1, 3, 6,7, 9 and 12 months after randomization. Relapses were defined by one of theparticipant neurologists as the development of new neurologic symptoms andconfirmed signs at least 30 days after onset of last relapse. In case ofcorticosteroids treatment the MRI was delayed 1 month. The EDSS and theMultiple Sclerosis Scale Functional Composite (MSFC) z- score wereevaluated every 3 months.
MRI protocol and image analysisStandardized MRI images were obtained at the screening visit, at baseline andevery 3 months with a 3T Siemens Trio MRI scanner (Erlangen, Germany), usinga 32-channel head coil. Two blinded MRI raters (SL and JB) identified enhancinglesions on axial T1-weighted sequence after gadolinium injection (GEL) and newlesions or enlarging lesions on serially registered long repetition time images (T2/FLAIR sequences). The volumetric measures included normalized T2 lesionvolume, normalized gray matter volume, normalized white matter (WM) volumeand percentage of brain volume change. Additional non-conventional quantitativeMRI outcomes were used to evaluate the possible neuroprotective and repaireffects of MSCs such as magnetization transfer ratio of GEL and of normal-appearing WM (NAWM), diffusion tensor imaging of NAWM and N-acetylaspartate levels (for more details on the MRI methods see Appendix S1).
Optical coherence tomography (OCT)Spectral Domain retinal OCT (Spectralis, Heidelberg Engineering) was performedfor each eye based on previously reported protocols by a blinded trainedneurologist (IG) at baseline, after 6 and 12 months. Peripapilar Retinal NerveFiber Layer (RNFL) thickness and macular volume (MV) were obtained, and thevalues of each eye were used for the analysis.
Immunological evaluationPeripheral blood mononuclear cells (PBMCs) were isolated by densitycentrifugation (Ficoll-Paque Plus, GE Healthcare Life Sciences) from wholevenous blood of patients at baseline and every 3 months. 106 freshly isolatedPBMCs were plated overnight in sterile culture medium. The next day, PBMCswere activated with 2 ml/ml of cell culture, of leucocyte activation cocktail (BDPharmingen). After washing with phosphate-buffered saline, cells were fixed,permeabilized and stained to asses the frequency of Th1 (CD4+IFN-c+), Th17 PLOS ONE DOI:10.1371/journal.pone.0113936

Mesenchymal Stem Cells in MS (CD4+IL17+), natural Treg (CD4+CD25+Foxp3+), induced Treg(CD4+CD3+IL10+) and Breg cells (CD19+IL10+) (see list of antibodies used inTable S1). Cells were analysed with a Beckman Coulter Gallios cytometer andFlow Jo software by a blinded researcher (BM) (Appendix S1).
EndpointsThe coprimary endpoints were safety of IV MSCs in RRMS patients and efficacyin terms of cumulative number of gadolinium-enhancing lesions (GEL) betweengroups of treatment during the first 6 months and the reduction in the meannumber of GEL (MSCs vs placebo period) at the end of the study. Secondaryendpoints included clinical outcomes (number of relapses, change in the EDSSand MSFC z- score), MRI-based measures (listed in the MRI protocol) and OCTmeasures between groups of treatment during the first 6 months and at the end ofthe study. Exploratory analysis included the immunological evaluation.
Statistical analysis The trial was planned to randomize 16 patients as suggested by the IMSCTSG. Nopower calculation was attempted. However, the enrollment accrual of 0.7 patientsper month dropped 1 year after initiation, coincidental with the approval offingolimod as second line therapy in Spain, and only one more patient wasrandomized from November 2011 to June 2012 and it was decided to end therecruitment. Analysis was performed based on the intention to treat with lastobservation carried forward (LOCF) to impute missing values. The primaryendpoint of cumulative number of GEL at 6 months (sum of the number of GELon T1-weigthed MRI brain scans at months 3 and 6) was estimated by means of anegative binomial regression model with adjustment for baseline number ofGEL. A sensitivity analysis was also done without LOCF imputation for missingdata introducing as offset variable the natural log of the number of scansperformed in the first 6 months. Additionally, the effect of MSCs vs placebo onGEL at 6 months was also analyzed by Mann-Whitney U test as change in thenumber of GEL with respect to baseline. The primary endpoint of change in thenumber of GEL in the complete period of the study was analyzed by the non-parametric Wilconxon's rank test for paired samples (MSCs period vs placeboperiod). To identify a possible carryover effect of the MSCs therapy, we alsocompared the cumulative number of GEL during the first 6 months (sum of thenumber of GEL at months 3 and 6) and during the second 6 months (sum of thenumber of GEL at months 9 and 12). For those variables expressed as a change at6 months the analysis was calculated with respect to baseline. Treatmentcomparison for the secondary endpoints at 6 months and for the complete periodwas analyzed as reported in the primary MRI outcome. MSFC disability outcomewas analyzed by Z-score conversion as indicated. The statistical analysis ofimmunologic studies was performed using SPSS 17.0. Mixed effects modelsincluding carryover effect and subject as random variable was fitted to thefrequency of immune system cells in the blood flow versus the treatment (placebo PLOS ONE DOI:10.1371/journal.pone.0113936

Mesenchymal Stem Cells in MS or treatment with MSCs). A subdivision has been done regarding treatmentperiod (first period, from month 0 to month 6 or second period, from month 6 tomonth 12).
A total of 15 patients were assessed for eligibility, 10 were eligible and 9 patientswere enrolled in the study shows the study profile). shows thebaseline participants' characteristics.
Patient 9 failed to grow adequate number of MSCs. The patient had a relapse in the interval of MSCs culture that was treated with IV methylprednisolone and a newbone marrow aspiration was successfully performed 6 weeks later. The mean cultureduration was 27 days (15–42). The mean administered dose was 1.876106 per Kgbodyweight (1.036106–2.166106). At baseline 4 patients received placebo and 5MSCs. There were not significant differences between both groups in demographicsor mean of GEL at baseline (4.75¡7.6 vs 4.6¡9.7, p51.0). Patient 1, randomizedto placebo in the first period, withdrew the consent after having 3 relapses in thefirst 5 months ). The patient completed all the safety evaluations.
Safety of MSCs therapy Patient 4 had a facial flushing during infusion of placebo and was the only recordedadverse event (AE) related to infusion. The only severe AE reported was a femurfracture secondary to an accident and therefore it was considered as not related withthe therapy. During the placebo phase there were three upper respiratory infections,two gastroenteritis, and one dental abscess, and during the therapy phase one upperrespiratory infection, one influenza virus infection and one gastroenteritis, all ofthem graded as mild. Patient 7 had a herpes labialis 7 days after the first infusion and1 month after the second infusion. Results of blood testing were unremarkablealong the trial. We did not identify any delayed AE after completion of the 12months protocol (median follow-up 13 months; range, 1–19 months).
Efficacy of MSCs therapy shows the individual clinical evolution. At 6 months, there was a trend to lower mean of cumulative number of GEL in patients treated with MSCs (3.1,95% confidence interval [CI] 1.1–8.8 vs 12.3, 95% CI 4.4 to 34.5, p50.064). Thistrend was also confirmed after analyzing the mean change in the number of GEL(p50.06) (Additionally, the sensitivity analysis without the LOCFstrategy also showed a trend to lower accumulate number of GEL at 6 months inthe MSCs group (1.53, 95% CI 0.53–4.42 vs 6.15, 95% CI 2.19–17.28, p50.065).
At the end of the study the patients during the period of MSCs therapy had atrend to significant reduction in the mean number of GEL in comparison with theperiod of placebo (22.78¡5.89 vs 3¡5.36, p50.075) The analysis ofthe cumulative number of GEL between the first and the second period of PLOS ONE DOI:10.1371/journal.pone.0113936 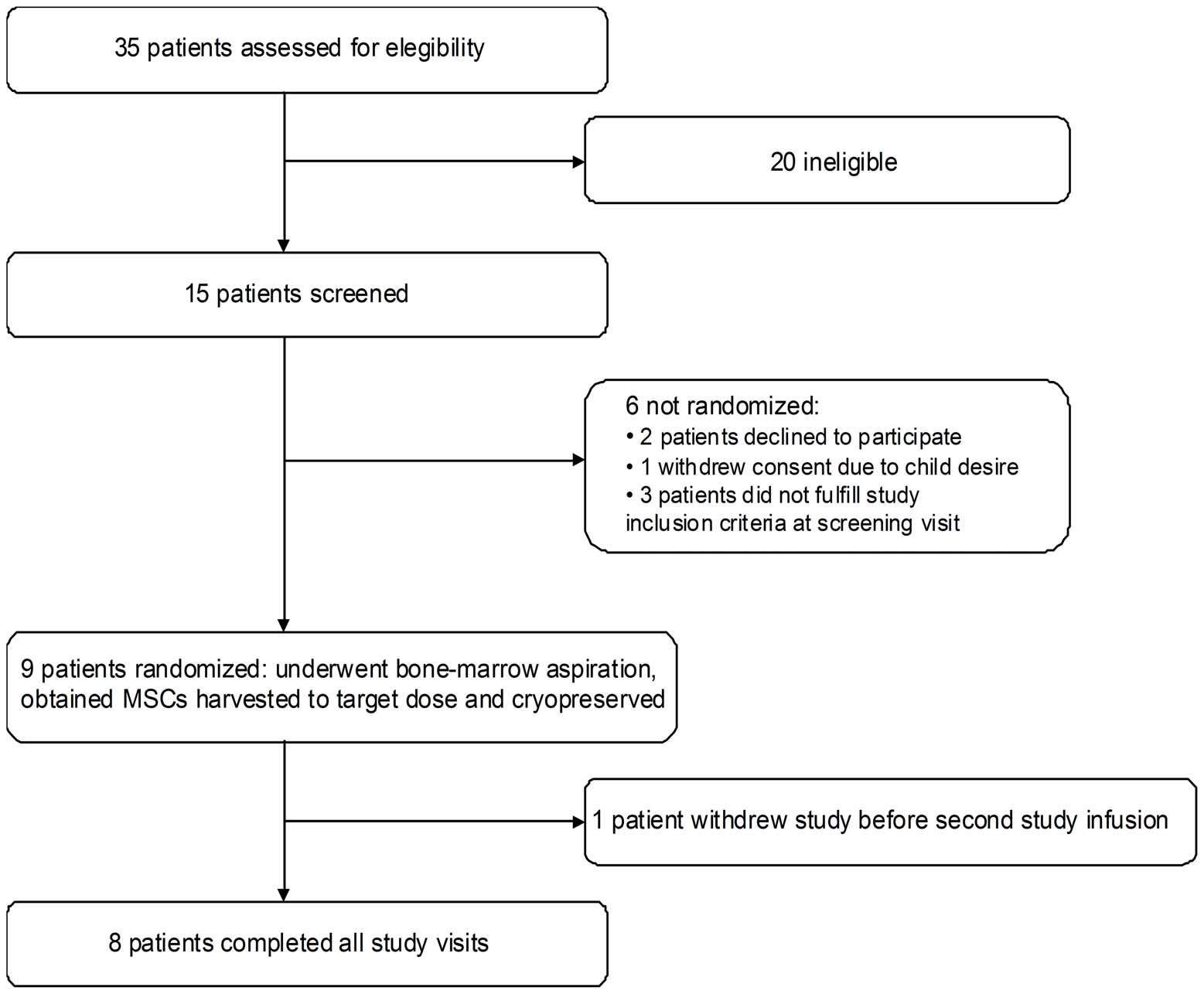