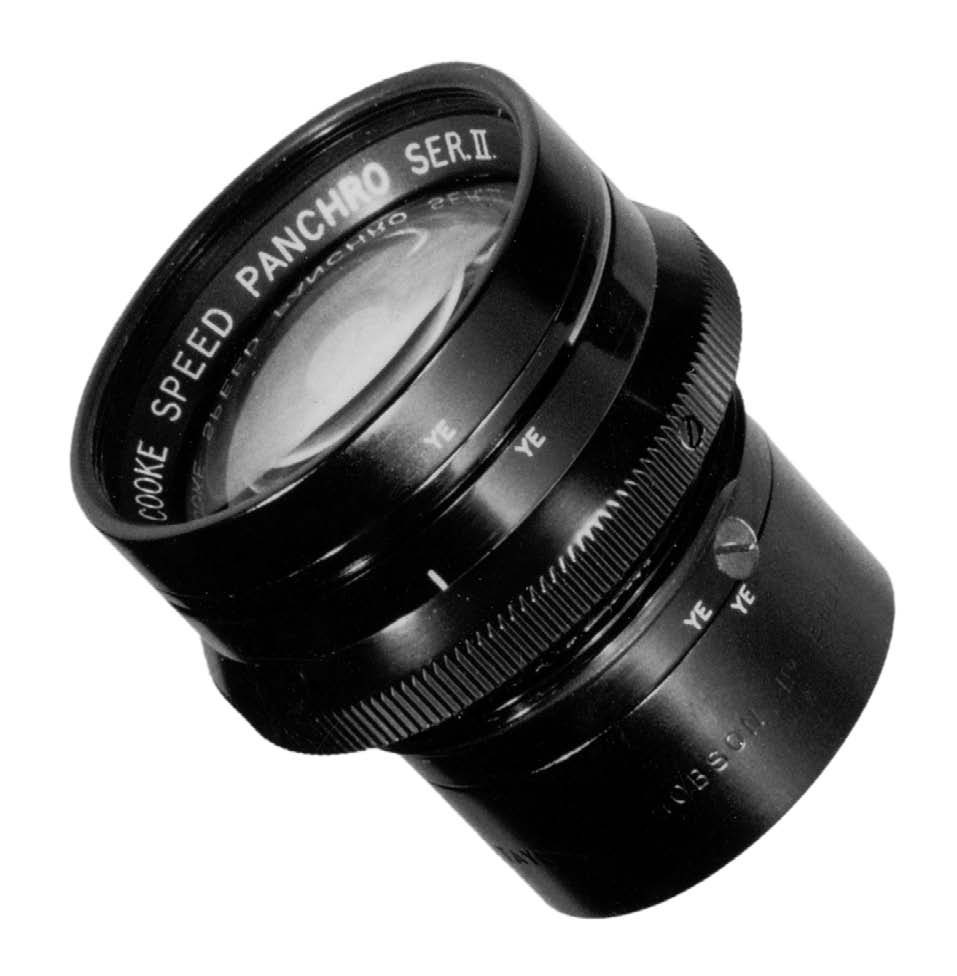 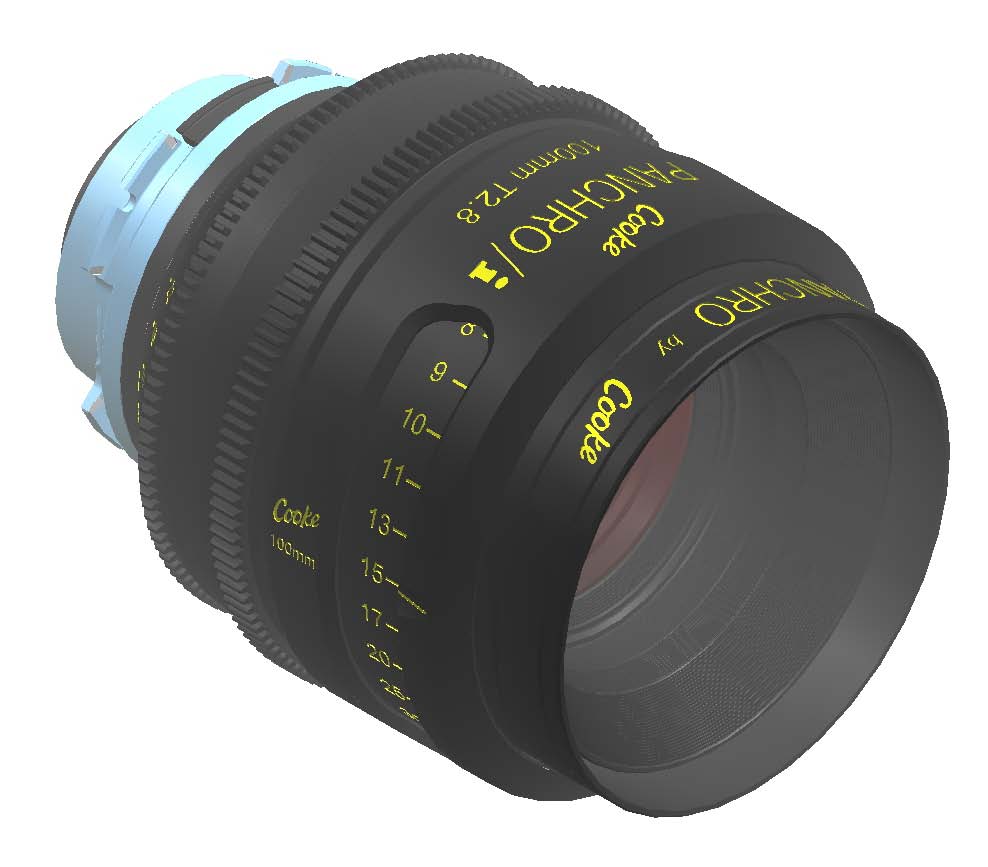 First Look: Cooke Panchros Like the Phoenix rising in Harry Potter, the venerable Cooke In September 9, 1926, Kinematograph Weekly reported: "Over Panchro name is being revived, or should we say, reinvented. a hundred Taylor-Hobson Cooke lenses of various focal lengths Film and Digital Times has learned that Cooke is working on a are used by the photographic department of the Famous Players- new set of PL mounted lenses for 35mm motion picture film and Lasky studios. This interesting information is contained in a letter digital production. The six new Cooke Panchro/i series—18, 25, from Frank E. Carbutt, Famous' Director of Photography. Mr. 32, 50, 75, 100 mm, all T2.8—should be ready by the end of the Carbutt adds that these lenses have, without, exception, given year, available individually or as a set. Panchros are designed, perfect satisfaction and that they have yet to find a poor Cooke manufactured and assembled in Leicester, England by the same team that created the S4 lenses, at an affordable price. They are clearly aimed at the large and vibrant community of up and July 1930, from an article in The British Journal of Photography: coming cinematographers. "It deserves to be better realized in the photographic world to what extent Taylor-Hobson lenses have come into favour in the But these are not training wheels for your top of the line Cookes. sound-film and silent-film studios in England and in Hollywood. When you get your ASC or BSC award, you are not obliged to The Cooke lenses of very large aperture have been establishing trade these Panchros in for S4 lenses, much as Cooke owner Les themselves increasingly in film production for several years past, Zellan would be delighted you do. The Panchros sacrifice nothing and are now in use to an extent which is very gratifying to those except a stop of light (T2.8 on Panchros vs T2.0 for Cooke S4). knowing the merits of British products. In the same way Taylor- The resolution is expected to be as good as an S4 at T2.8. They Hobson projection lenses have secured something like a monop- are about 20% lighter and smaller. The new Panchro line is being oly among the ‘super cinemas' in this country for projecting designed with 4K (and beyond) digital and film production in these same films. Frequenters of the movies may reckon therefore mind. The aperture is linear. Focus mechanisms are still cams. that most of the pictures which they see are both produced and Focus scales are generous. And Cooke /i Technology is included. projected by means of lenses made in the Leicester factories." Preliminary technical specs are printed on the next page. The By 1935, Cooke Speed Panchros for cinematography were Panchros are still a work in progress, so details, specs, shapes supplied in 8 focal lengths: 24, 28, 32, 35, 40, 50, 75 and 108 mm. and other things may change. One thing is not going to change: They all covered the standard or "normal" 35mm 1.33:1 format the inexorable demand for more PL mounted lenses to put on all of 0.631 x 0.868 inch. the new film and digital cameras, including the Sony F35, ARRI D21, RED, Aaton Penelope and the hundred-thousand existing "Those who fail to learn the lessons of history are forced to see it PL mount cameras. Panchros have a prestigious provenance. The repeated," said a famous statesman. It seems that Cooke has not majority of feature films made in Hollywood during the first half failed in their history lessons and are repeating the success of one of the 20th century were shot using Cooke lenses, and many of of the most popular lens sets of all time. these were Panchros. In 1921, Horace W. Lee designed the Cooke Speed Panchro, a prime lens with a wide aperture for filming in 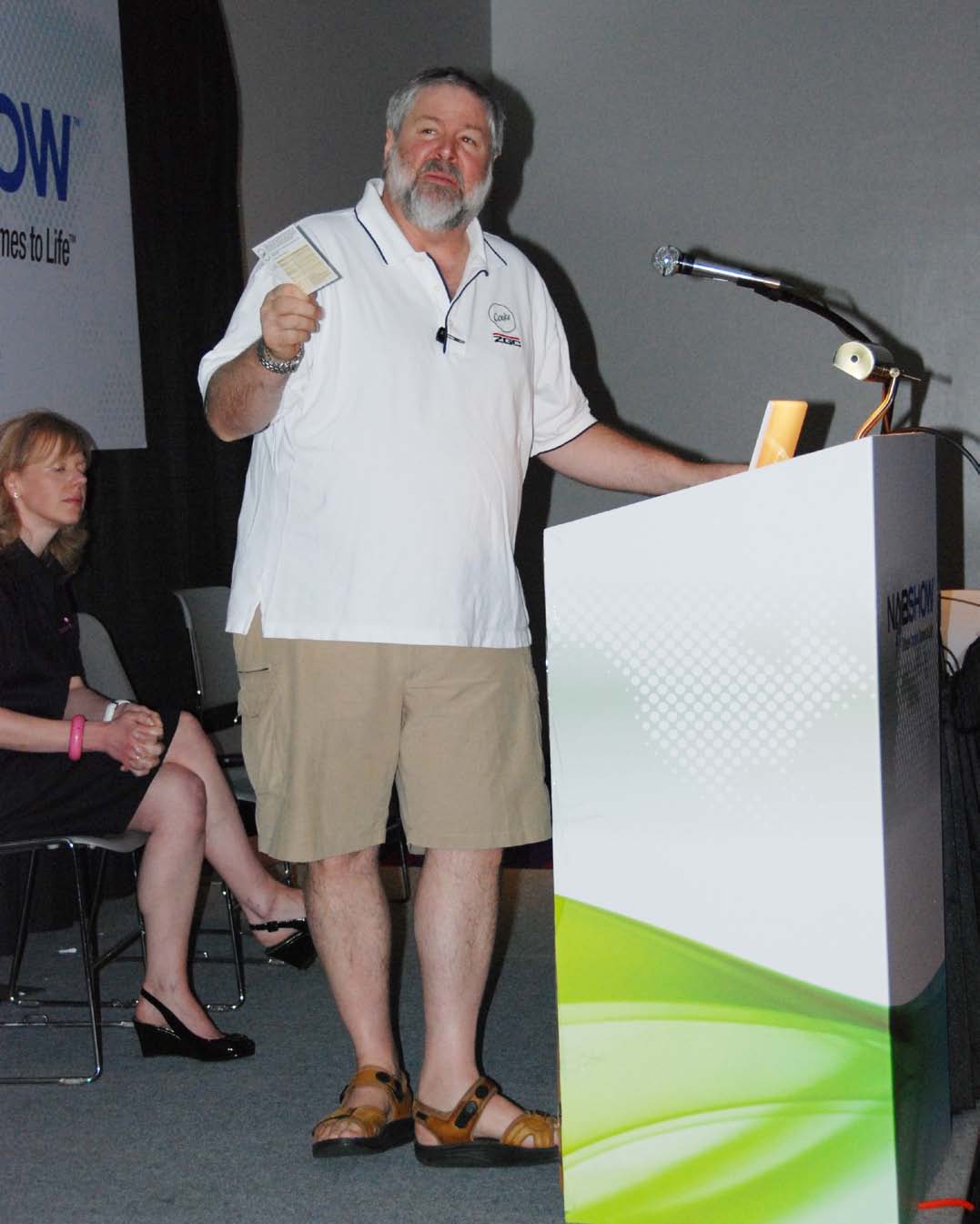 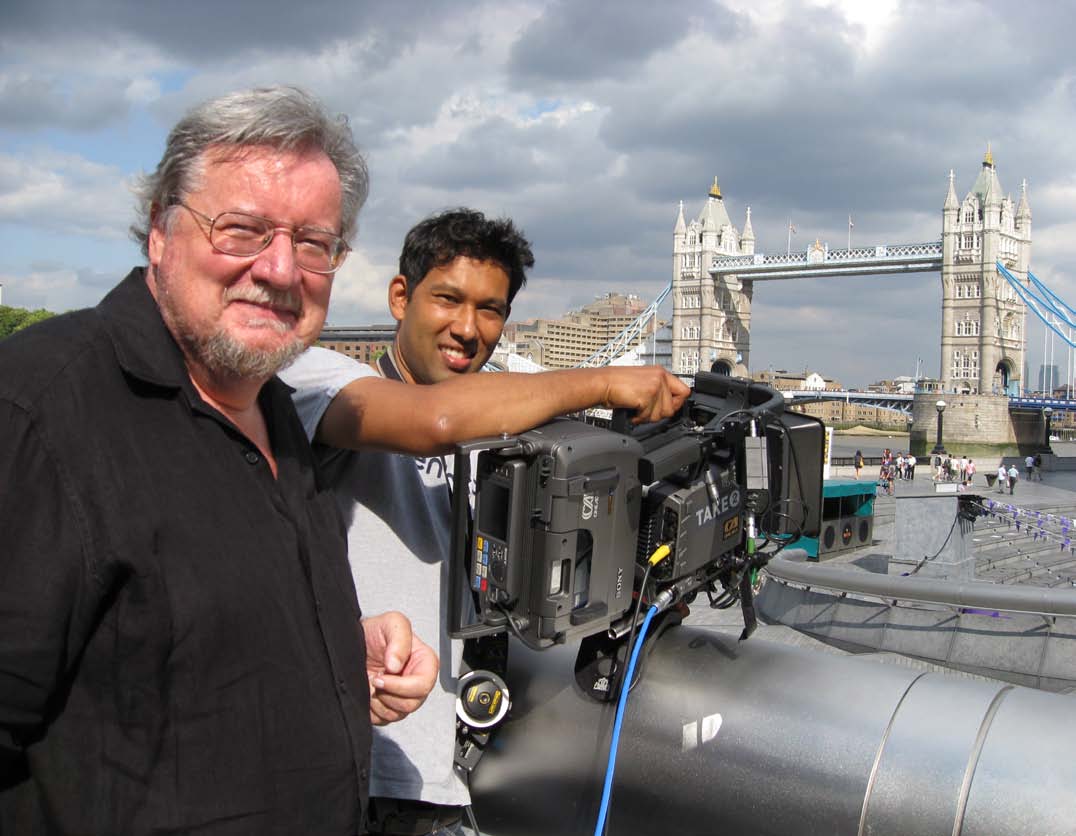 Cooke at NAB 2009 Panchro in 1921; it was a cine prime lens that chromatically enhanced an image when filming under low light. The advent of sound films created a great demand for faster lenses since arc lamps were difficult to use because of the noise they made, making most existing lenses obsolete. The Speed Panchros were born out of the industry's need for faster lenses to cope with lower light levels brought about by the new sound requirements on the set. Cooke Speed Panchros combined a relative aperture of f/2 with an angular field of view and definition previously impossible with much smaller apertures. The Cooke Panchro was also instrumental in the introduction and success of Technicolor in the 1930s because the Panchro's unusually high correction for chromatic aberrations made it suitable for color photography.
The six Panchro By Cooke prime lenses - 18, 25, 32, 50, 72 and 100mm – will be available to purchase individually or as a set. The lenses are expected to be available at the end of 2009.
Cooke also announced that the popular Sony F35 CineAlta camera will incorporate support for Cooke's /i Technology. The /i Technology protocol enables the recording of extremely accurate, frame-by-frame lens and camera data seamlessly on the set. This can save visual effects artists hours of time in post-production by eliminating the need to guess lens parameters and camera information. This information enables artists to produce more realistic-looking effects, more quickly. In August, Geoff Boyle (below) conducted a London /i test near the London Eye for Cooke and Pixel Farm on an /i equipped Sony F35. Details of the NAB 2009. Les Zellan, chairman of Cooke Optics (above, at NAB compositing test will follow. Press Conference), announced the rebirth of an iconic lens, the Cooke Panchro lens. The PL mounted lens for 35mm film and Cooke's /i Technology is supported by many leading camera and digital production is a modern redesign of the original Cooke content creation companies including RED, Aaton, ARRI, Avid Panchro lenses that were widely used in Hollywood. The legend- ary lens is expected to be available at the end of 2009.
Cooke S4/i lenses were recently used on award-winning films and The Panchro by Cooke lens is designed by the same team that television shows including Milk, Frost/Nixon, 30 Rock and on produces the Cooke S4/i lens; it is calibrated and color-matched cameras throughout the NAB show. As well as demonstrations to existing Cooke lenses and incorporates Cooke's /i technology, at the P+S Technik booth, the S4/i lenses were also in the Canon, so it is interchangeable with the Cooke range. JVC, Sony and Band Pro booths.
The new Panchro sacrifices one stop of light (T2.8 compared with T2.0 for Cooke S4), thereby offering a smaller, lightweight and affordable choice when a faster lens is not crucial or when shooting in difficult situations such as crash scenes or VFX shots. The price point also brings the benefits of Cooke lenses to independent filmmakers, film students and documentary makers, while the reduced size, weight and true focal length markings make Panchros ideal for 3D stereoscopic productions.
Les Zellan, chairman of Cooke Optics, said, "We are so excited to bring Panchro By Cooke back to the film industry. With the credibility of film history and over 100 years of development behind it, the Panchro by Cooke lens is a serious yet affordable piece of equipment for professional film makers." The Panchro lens has played a major role in the history of Hollywood. Horace W. Lee designed the original Cooke Speed 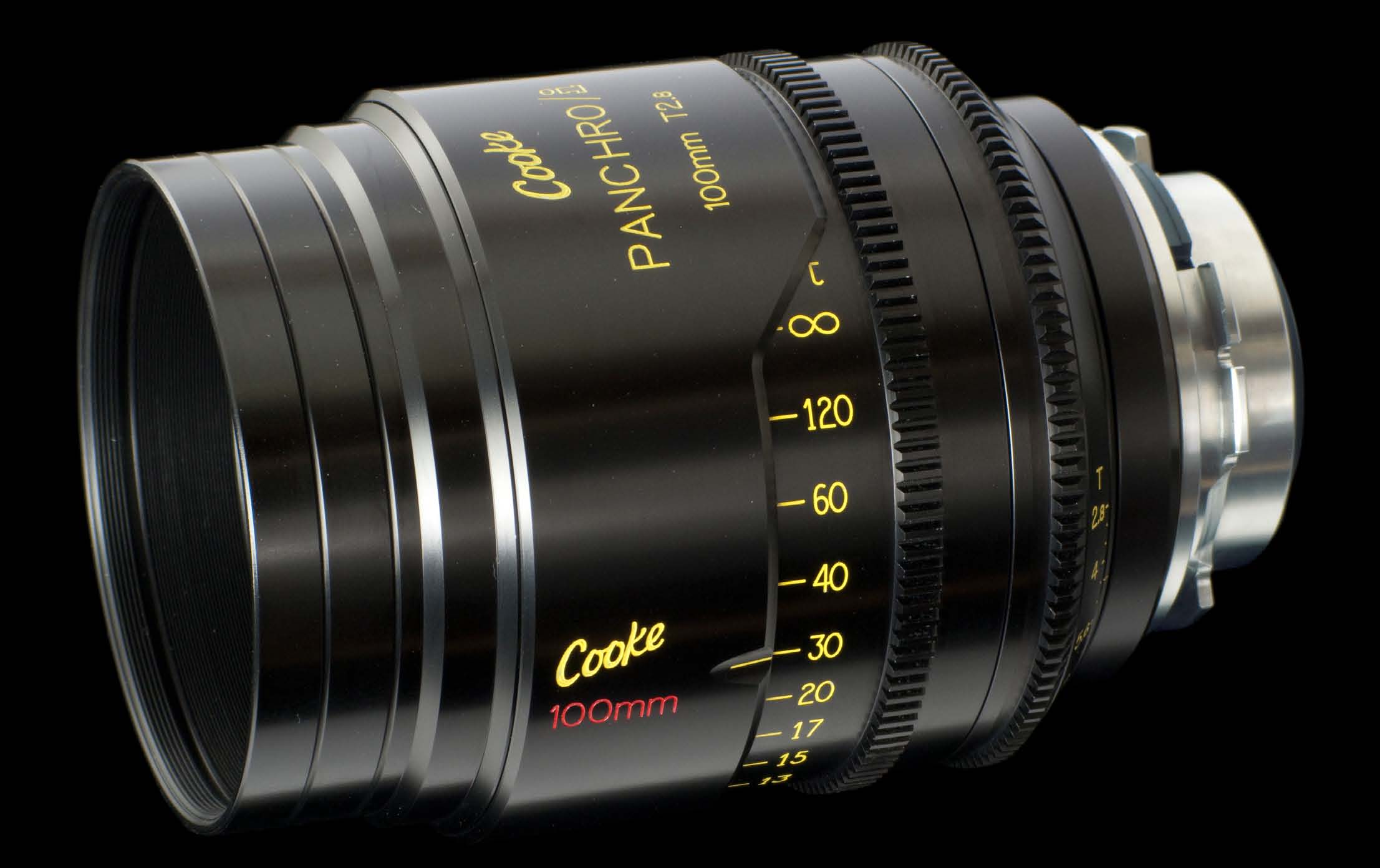 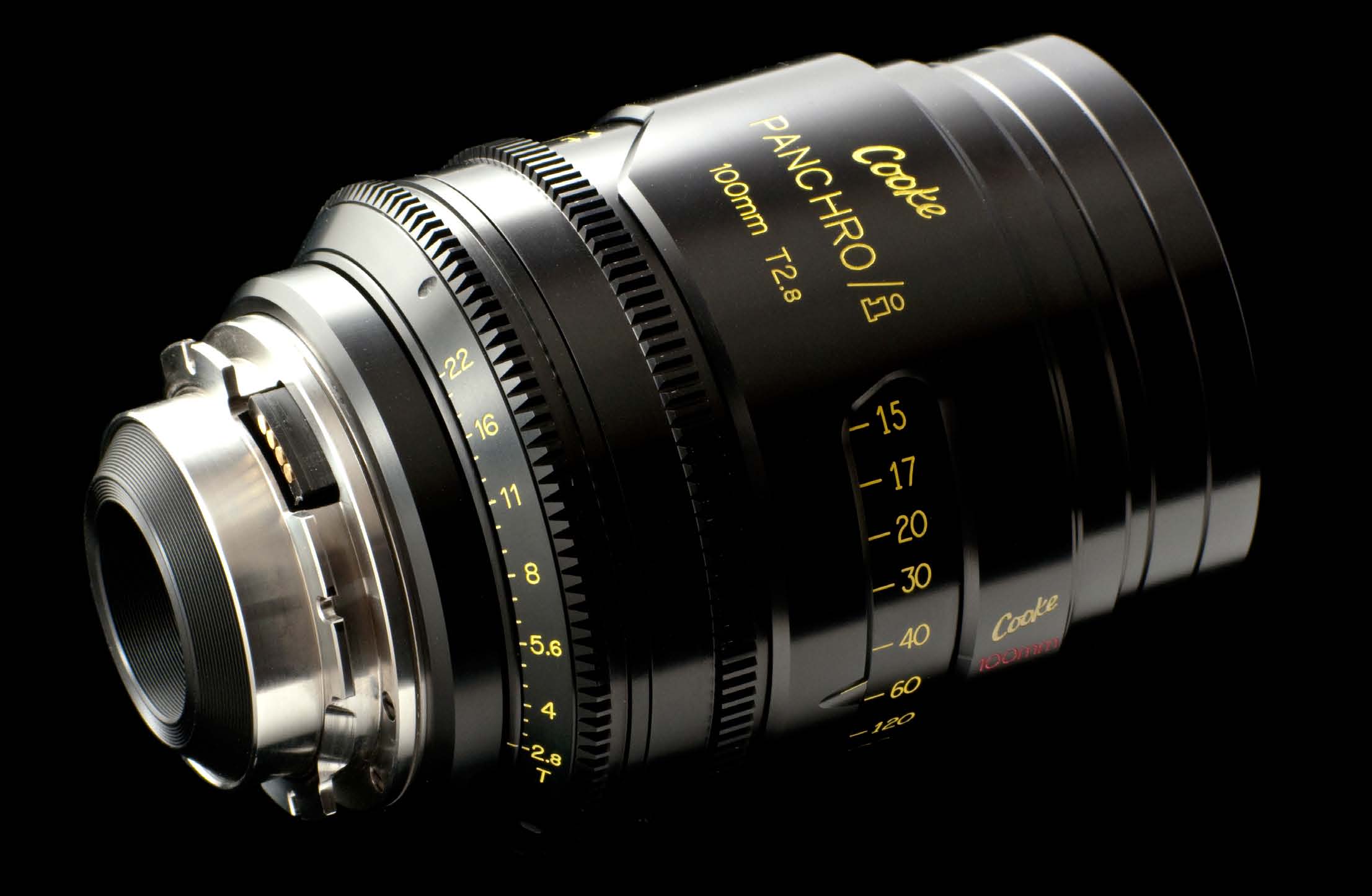 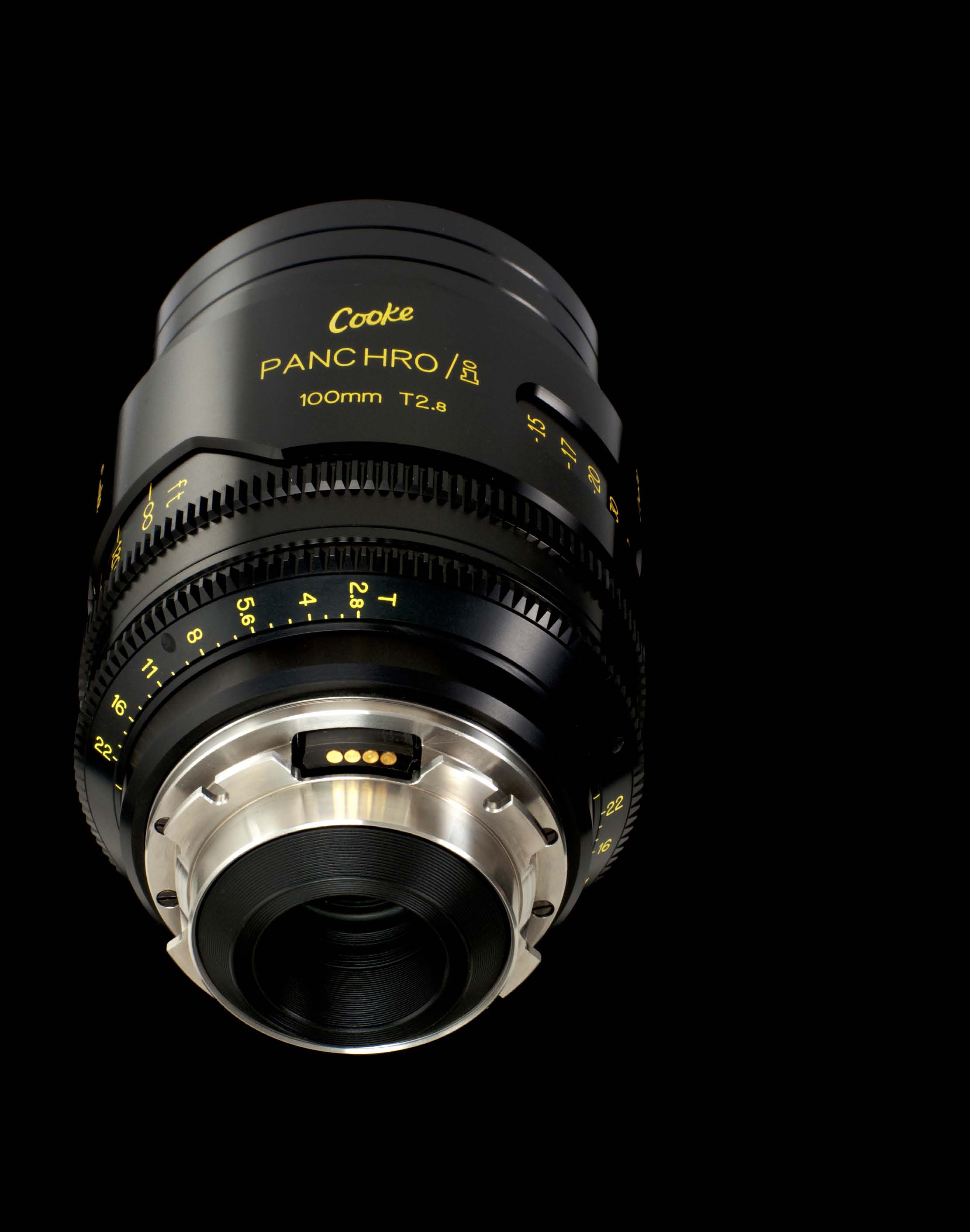 Stop the presses. Cut cameras. Although there were CAD drawings of the Cooke Panchros at NAB, we weren't really sure what to expect.
Today, August 24th, we are not only staring at a real production model of the Panchro /i 100 mm T2.8 , but also are about to shoot a test with it. Several things come as surprises: all good. This looks, feels and acts like the Cooke S4 series: the same silky, floating feeling as you pull focus.no binding or resistance.effortless focus riding on its cams. AT NAB, there was chatter and twit- ter that this would be a Cooke Lite, less filling and maybe less impres- sive. Not so. If anything, it fills a void hitherto unaddressed. As Geoff Boyle so eloquently put it on the phone yesterday, the fact that the Panchros are color matched and perform like their brethren means you can confi- dently order them by the dozens and dozens for your multi-camera shoots. For example, a normal camera and lens package for the bulk of your single-camera show might include a couple of zooms and a set of S4/i lenses. But, now it's time for the big stunt end scene, you know, where they jump off the largest cliff the world has ever seen, or something equally impressive and equally demanding of at least ten cameras running concurrently. Now, you know the producers is going to pull out the Pepcid pills for acid indigestion if you suggest renting ten complete sets of S4 primes for every crash camera covering the shot. And you're certainly not going to volunteer your own personal set. The answer is a plethora of Panchros, lighter, smaller, less expensive than the S4 set, one stop slower, and very impressive. The rest of the set is coming soon. New Cooke PANCHRO/i Lens Set T2.8 - T22 T2.8 - T22 T2.8 - T22 T2.8 - T22 T2.8 - T22 Angular Rotation of Iris Scale Minimum Marked Object Distance Close Focus from Lens Front Angular Rotation to MOD Endstop Maximum Diagonal Angle of View for Super 35 Format Length from Front of Lens to Lens Mount Maximum Front Diameter • Maximum Format Coverage: 30mm Diameter (Super 35mm Format) • Focus Scales: Two opposing focus scales - metric or footage. Scales marked from infinity to MOD. • Focus Drive Gear: 121 teeth 0.8 metric module x 5.0 wide x 104 from the image plane.
• Iris Scales: Two opposing linear T scales - whole stops marked. • Iris Drive Gear: 119 teeth 0.8 metric module x 2.5 wide x 84 from image plane.

Appendix: A Proposed Approach to Nosology © Ronald B. David, MD While the practice of medicine has experienced major technological advances in recent years, nosologic systems (e.g., International Classification of Diseases – 10 and the Diagnostic and Statistical Manual – IV of the American Psychiatric Association) present at times a confusing array of diagnostic possibilities. Many diseases/disorders may even be represented in more than one place in the diagnostic system. Lack of a comprehensive framework leads to diagnostic confusion in the clinical, teaching, and often in the research setting. Clearly, organization and orderliness are needed to better discriminate between entities. Webster's International Dictionary defines nosology as the branch of medical science that deals with the orderly classification of diseases. My purpose is to propose such a system. This system will submit a priori that if a disease/disorder exists, there must also exist features which discriminate it from similar entities. It is clinically derived by expert opinion, categorical and multi-dimensional. Where the state of the art permits, discriminators have been empirically validated.