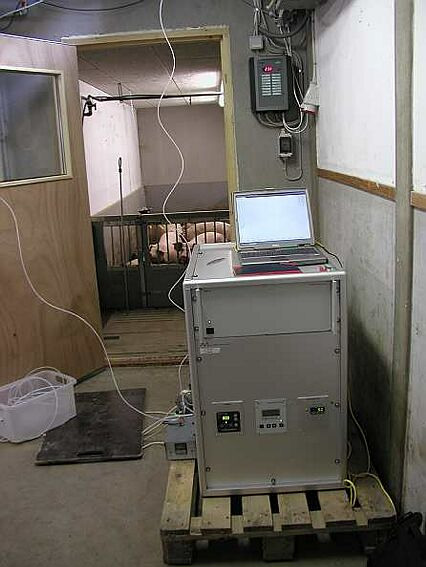 Workshop on Agricultural Air Quality Figure 1. MIMS-instrument in a pig stable
A mass spectrometer (Balzers, QMG 420) equipped with a membrane inlet consisting of a temperature controlled membrane (50 µm polydimethyl siloxane) and a stainless steel air intake was used for the measurements presented in this paper. An air pump was used to pass unfiltered air by the membrane at a flow rate of 200 ml/min providing turbulent conditions near the membrane surface, which gives the most efficient uptake of volatile compounds. Odour compounds are sampled from the air by absorption into the membrane, and because of the low pressure inside the mass spectrometer compounds diffuse through the membrane and evaporate into the ion source of the mass spectrometer. In order to monitor the efficiency of odour abatement technologies, a multiposition valve was used to multiplex between air influenced by the technology, reference air and background (clean) air. In case of a biofilter, for example, a measurement cycle consists of 1) clean air, 2) air sampled before the filter and 3) air sampled after the filter. The efficiency with respect to a certain compound is estimated from the background-subtracted signals before and after the filter, respectively. Results and Discussion
Basic Studies of MIMS Response to Odour Compounds In Figure 2, a mass spectrum obtained by sampling the headspace of manure from a Danish pig farm is presented. The sample represents a concentrated odour sample compared to typical emission levels from pig farms and is useful for evaluating which compounds contribute to the main MIMS-signals. Workshop on Agricultural Air Quality Figure 2. Assignment of MIMS-signals to odour compounds or groups of odour
compounds. The x-axis is the mass/charge ratio (m/z) of the ions formed.

It can be seen from Figure 2, that several of the major MIMS-signals can be assigned to important odour
compounds or structurally related groups of compounds. Some signals, e.g. from m/z 50 – 58 and from m/z
77 – 80 are less specific and therefore less useful for monitoring odour compounds. The composition of the
sample was confirmed by GC/MS.
There are a number of carboxylic acids present in typical samples from pig facilities. These give rise to overlapping MIMS-signals at m/z 60, 73 and 74. Therefore carboxylic acids are mainly measured as groups of compounds according to these signals. Likewise, reduced organic sulphur compounds are detected by a common signal at m/z 47 corresponding to compounds containing the CH3S- moiety, which mainly comprise methyl mercaptan, dimethyl sulphide and dimethyl disulphide. These sulphur compounds give rise to other MS-fragments that are not, however, unambiguous due to overlapping with other compounds. Other odour compounds, like skatol and indol, possess more specific MS signals. The sensitivity of MIMS is compound specific and is related to the volatility and polarity of the compound and hence its ability to be absorbed into the non-polar membrane. Carboxylic acids, for example, are highly abundant (as quantified by GC/MS) but do not give rise to the largest MIMS signals due to their high polarity. An important feature of MIMS is the linearity of the response as a function of concentration. In Figure 3, examples of calibration curves for carboxylic acids (RCOOH; the sum of carboxylic acids containing the mass spectrometric fragment with m/z 60) and p-cresol (4-methylphenol) are shown. The data in Figure 3 was obtained by injecting various amounts of a synthetic mixture of 10 important odour compounds into a Tedlar sampling bag and analyzing by MIMS. The concentration levels were selected in order to cover real-world concentration levels. P-cresol (m/z 108) Concentration (µg/m3) Concentration (µg/m3) Figure 3. Calibration curves of RCOOH (carboxylic acids) and p-cresol. The straight curves
are linear regression data.

Workshop on Agricultural Air Quality Application of MIMS for Monitoring Odour Reduction An example of results from the application of MIMS for monitoring the efficiency of a biofilter is presented in Figure 4. It appears that the efficiency of the filter towards different compounds is quite stable, whereas there is more variation regarding the efficiency towards different types of compounds. P-cresol and carboxylic acids are efficiently removed, whereas organic sulphur compounds are less reduced and with much more variability in the results. These results are not surprising since it is a prerequisite for efficient removal that the odour compounds are absorbed into the aqueous phase of the biofilter. Organic sulphur compounds, such as dimethyl sulphide, are much less water soluble than carboxylic acids or p-cresol. 02-28- 03-01- 03-02- 03-03- 03-04- 03-05- 03-06- 03-07- 03-08- 03-09- 03-10- 03-11- 03-12- Figure 4. Biofilter efficiencies towards p-cresol (black circles), RCOOH (open circles) and
reduced organic sulphur compounds (ROS; grey circles). Data from March 2005. The
efficiency is estimated from the MIMS signals before and after the filter.

Workshop on Agricultural Air Quality The path length is the distance to the mirror and back. Measurements are taken for both fields in real time. The measurements are then divided as in Figure 2 to demonstrate the percent difference in transmitted light and the corresponding difference in concentration. Meteorological conditions are measured throughout. Ideal conditions are when the wind direction is perpendicular to the path in which the light travels. This allows us to "see"(in terms of IR absorptions) the differences in concentrations for the two fields without disturbing the natural parameters outlined above. Path lengths are typically 200 m or more, in order to provide reproducible average concentrations and minimize variabilities associated with spreading manure. It is desireable that the two fields be level and that the two light paths be at the same distance and height above ground. Quantitative In order to qu nt a ify GHG and GHG precursor emissions and associated rates the same methodology is employed as in the qualitative configuration. Only this time micrometeorological parameters such as vertical and horizontal wind direction and speed are simultaneously logged at the same time. Furthermore additional paths at different heights and horizontal positions are monitored concurrently by other FTSs. This permits reliable visualization of air movements, resulting in concentration gradients for all recorded [emitted] GHGs and GHG precursors. This data can then be used to model emission rates for all IR visible constituents. A similar micrometeorological - gradient technique has been used to calculate emission rates in previous studies using point source sample collection at different heights. It has also been compared to a SF6 tracer technique for reliability verification. The results and methodologies of this study are described in detail by Galle et al (2000). LPFTS Simulated Results
Field measurements will commence in the spring of 2006 at the Lynn Cattle Farm, located just north of London, Ontario, Canada. Topography as well as soil characteristics are documented, well known, very homogenous and therefore close to ideal at this location. In order to bench test LPFTS performance prior to field measurements, simulations were carried out. The concentration values used within the simulations were based on a study conducted by Griffith et al (1999) where elevations in atmospheric CO2, NH3 and N2O concentrations caused by land applied raw manure were simultaneously monitored using an FTS and a sample cell where the sample atmosphere was collected through Teflon tubing. The study showed that the elevation above the background concentrations for CO2, NH3 and N2O were between 0-200, 0-0.4 and 0- 0.125 ppmv respectively. In order to obtain simulated result of what is expected using the measurement configuration outlined in the methodology section, simulations of transmission measurements over a raw manure spread field and digested manure spread field were created using the FASCD3 radiative transfer model (Clough et al, 1995). The concentration values used for digestate correspond to fully digested substrate i.e. background values, which are 1.8 ppmv, 365 ppmv, 50 ppbv and 310 ppbv for CH4, CO2, NH3 and N2O respectively. In order to simulate raw manure transmission measurement values of 50 ppbv, 200 ppbv and 25 ppbv and 10 ppbv above the background value were used for CH4, CO2, NH3 and N2O respectively. These differences in concentration values fall within the limits measured in the Griffith et al (1999) study. The value for CH4 is assumed to be 50 ppbv. The two simulated measurements were then divided to give the percent difference in transmission of light at a spectral resolution of 0.125 cm-1 as shown in Figure 2. The path length used in the simulations was 200 m at a temperature of 20o C and a humidity of 40%. Figure 2 also shows a colour-coded display of the unique absorption features of CH4, CO2, NH3, and N2O. The concentrations of these constituents will be determined by matching the measured transmission difference to a simulated transmission difference. The concentrations required to make the simulation match the measured values will be equal to the concentration difference between the two fields. The plots in Figure 2 demonstrate that the above-mentioned constituents are easily detected and that lower concentration differences will also be seen. The limiting factor for lower detection limits is instrument-generated noise, which is illustrated in the error section. Workshop on Agricultural Air Quality Wavenumber (cm-1) CO Absorption Feature NH Absorption Feature N O Absorption Feature CH Absorption Feature Wavenumber (cm-1) Wavenumber (cm-1) Wavenumber (cm-1) Wavenumber (cm-1)
Figure 2: Shows the simulated difference in transmission of radiation between a raw
manure spread field and a digested manure spread field. The bottom plots show eac
the four constituents own unique absorptions.
Error Sources
Error (%)
Instrument Calibrat o Instrument Noise Cross sectional dat Total Error *
Table 1. Shows the contribution of the various error sourc
es to the to
ror. Since each
error source is independent of one another the total error is calculated by taking the
square root of the sum of the squared error sources. * This total error is based on 0.6 %
instrument noise and a 5-minute 0.125 cm-1 measurement.
LPFTS Error
The significant sources of error in LPFTS measurements can be: instrument calibration, instrument noise and in the cross sectional data used by the FASCD3 m odel Table 1 quantifies the amount of error associated with each source. Workshop on Agricultural Air Quality The instrument noise contribution varies due to length of time and spectral resolution of measurement. The noise for two complete 5-minute measurements (digested and raw manure) equals 0.5921 % peak to peak at a resolution of 0.125 cm-1. In the case where depth of the absorption feature is only 0.5% then the noise contributes 100 % error. Obviously the LPFTS method would not use such a peak. Figure 3 shows a typical absorption feature where noise would only contribute 2 %. Wavenumber (cm-1) Figure 3. Shows the agreement between the measurement and the model for a single CH4
absorption feature.
The noise value can also be improved by reprocessing the measurement at a lower resolution if the absorption feature in question does not require a high resolution to measure it accurately. Table 2 shows th various noise values fo r eac part of the spectrum under different spectral resolutions. Region (cm-1)
0.125 cm-1
0.25 cm-1

Table 2: Noise values present in the combination
of a 5-minute digestate
a d a 5-minute raw manure measurement at three different spectral resolutions.

HaverhillMeds is an optional international mail order program designed for the Employees, Retirees and Dependents of the City of Haverhill, MA. Your list of qualified medications is on Copayments: All copayments have been waived for this program only. HaverhillMeds Vs. Current local purchase plan Annual Cost

Neurofeedback – How Attention Takes Flight Pierre Walther and Stephan Ellinger Goethe University Frankfurt, Julius-Maximillians-University Würzburg (GERMANY) Attention Deficit Disorder (ADD) alone or in combination with Hyperactivity (ADHD) is one of the most common disorders in childhood and adolescence and even persists into adulthood. Children with ADHD show a higher amount of slow brain waves and a decreased amount of faster brain waves compared to children without ADHD (Barry et al., 2003). The basic idea of neurofeedback is to transfer the unconscious process of brain wave function into a conscious process by reporting it to the patient. The Brainfeeders project aims to evaluate the possibilities for integrating neurofeedback in a school setting. The primary goal of the study is to replicate results found in clinical trials without any additional human resources. We would like to evaluate how well a training programme like this fits in school settings and if results are comparable to clinical studies. We are interested in forming a transnational working group, integrating researchers who are working on similar projects or who are interested in working on Brainfeeders in their countries.