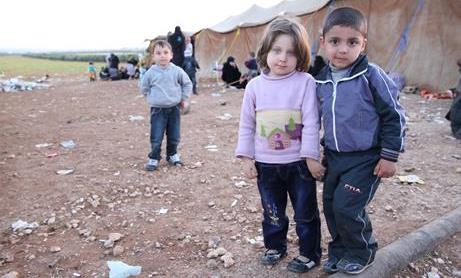 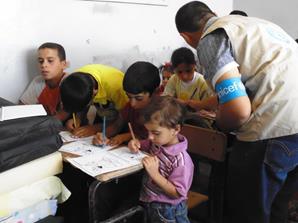 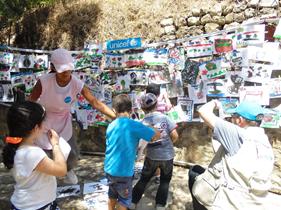 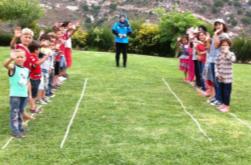 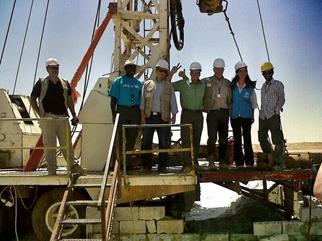 SYRIA CRISIS BI-WEEKLY HUMANITARIAN SITUATION REPORT Highlights  Drilling of the first borehole in Azraq camp is completed. Total number of registered refugees and pending registration:
Installation of water and sanitation facilities is progressing 512,281 (UNHCR August 6, 2013)
according to schedule. Registered
7,989 Syrian refugee children are participating in summer Refugees
catch-up classes to enable their return to school in the fall. Total Affected
Population
1,054 mothers and 463 children under five visited the four Children Affected
UNICEF/Save the Children Jordan (SCJ) Infant and Young Child (Under 18)
Feeding (IYCF) caravans in Za'atari and EJC camps. Children Under
 UNICEF partners Un Ponte Per and Jordan Women's Union Five
Children 6 to 23
have recorded 3,027 visits by children at 16 Child Friendly Spaces in host communities in 7 Governorates in North and Pregnant women
Situation overview and humanitarian needs Some 257,153 Syrian refugees have crossed into Jordan since 1 January 2013, bringing the total number of Syrians now registered or awaiting registration with UNHCR to 512,281. The Government of Jordan estimates there are now over 600,000 Syrians in the country, of which over half are children. Since 10 July, arrivals have dropped markedly, averaging less than 100 refugees each night, as compared with over 500 arrivals per night in June. Programme Response WASH UNICEF and partners' work to prepare WASH infrastructure at Azraq camp continues at a steady pace. Some 21km of pipes have been laid in all villages and the 19 water storage tanks with a combined capacity of 1.69 million litres (sufficient capacity for over 56,000 people at 30 litres/person/day) have been installed. Forty-nine tap stands/water collection points have been installed. For sanitation facilities, over 2,100 latrine pits have been dug, 611 septic tanks delivered to site and 186 wash units (toilets and showers) are ready to serve 2,790 people at a ratio of 1:15. The first Azraq borehole was drilled to a final depth of 500 metres and had an initial promising yield on 1 August. Next actions involve borehole development and water quality testing. The electricity connection to this borehole has also been completed; the system is being flushed and cleaned and should be ready for use by next week (after the Eid holiday). Azraq Camp is expected to open on 1 September. Collection of sewage from Zaatari camp is running smoothly with average 1,400m3 collected daily. Azraq borehole draws water on 1 Aug 2013(UNICEF/Jordan
2013/Melandri) 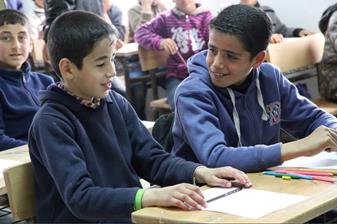 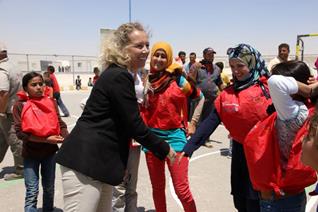 SYRIA CRISIS BI-WEEKLY HUMANITARIAN SITUATION REPORT Fifty-four team members from UNICEF partners Relief International and ACTED received training on hygiene promotion to implement activities at King Abdalla Park (KAP), Cyber City (CC), Ramtha and Irbid Camps. Child Protection: UNICEF supports 65 Child and Adolescent Friendly Spaces (42 in camps and 23 in host communities) which provide psychosocial support to children. A further 10 playgrounds and multipurpose courts providing recreational activities are supported in Za'atari, KAP, Emirates Jordanian Camp (EJC) and CC. During the reporting period, seven more spaces have been added in three governorates in host communities with the approval of an agreement between UNICEF and INTERSOS/JOHUD by Jordanian Government. Agreements have been finalized with Mercy Corps, International Medical Corps (IMC) and International Rescue Committee (IRC) to establish child protection interventions in Azraq refugee camp. Under one such agreement, IMC will establish and operate two Adolescent Friendly Spaces to provide specialized structured psychosocial support activities. Additionally, IMC provide case management services to children identified as having suffered harm or who are at risk of abuse, violence and exploitation. Under a separate agreement, IRC will be responsible for setting up operations in Azraq for the management of cases of unaccompanied and separated children. UNICEF/Mercy Corps will operate ten Child Friendly Spaces in Azraq for children 6 -14 years old, and four Adolescent Friendly Spaces for children 15 -18 years old. Additionally, JCO Representative joins a basketball game in Za'atari
(UNICEF/Jordan2013/Azzeh)

Mercy Corps will construct eight playgrounds in Azraq. UNICEF and partners have provided structured psychosocial support to 70,280 children and adolescents (47 per cent male) in refugee camps and host communities with 6,943 of these children and adolescent receiving more focused and more specialized case management services. UNICEF/IRC/IMC has identified and registered 480 unaccompanied and 542 separated Syrian children since January 2013 in refugee camps and host communities. During the same period 202 children have been reunited with their families. A further 91 unaccompanied children are receiving family-based or appropriate alternate care. These children are followed up with very regularly by case workers. UNICEF and partners (Un Ponte Per and Jordan Women's Union) have recorded 3,027 visits by children at 16 Child Friendly Spaces in host communities in seven Governorates in North and Central Jordan. Activities have been focusing on traditional games, health and nutrition, environment and hygiene. Social mobilizers have also stared working with communities to form community based child protection committees (CPCs). One CPC has already been formed. Education In Za'atari School 1, summer activities continue with remedial education in the morning session and recreational activities in the afternoon session. Some 500 students attend the sessions each day. As part of the Back to School Campaign, UNICEF's Education and Communication teams had their first session with 35 Imams in the old mosque of Za'atari camp on the importance of education. It was led by Imam Yahya (Clergy Beyond Borders based in Washington DC) organized by UNICEF/SCJ. The main objective was to have closer engagement with the Imams around the issue of education in Za'atari. SCJ created teams of teachers and students in Za'atari School 1 for "Talking Walls" activity as part of "Back-to-School" campaign, Boys at school in Za'atari camp. (UNICEF/Jordan2013/Malhas)
SYRIA CRISIS BI-WEEKLY HUMANITARIAN SITUATION REPORT encouraging children to come to the school and participate in drawing and writing messages on school walls. In total, the Back to School campaign will target 20,000 children in Za'atari and 60,000 children in host communities. The total number of registered students for catch-up classes in the Za'atari and EJC camps has increased to 3,965 bringing the total number in both camps and host community settings into 7,989. The number of registered students for informal education in Za'atari Camp and host community are 483 and 2,491 respectively bringing the total number of registered students for informal education to 3,294. UNICEF and the Ministry of Education (MoE) have collaborated to map the absorption capacity of schools with the highest concentration of Syrian students. Schools accommodating large numbers of refugees were classified into three main categories: severely overcrowded, overcrowded and crowded. Accordingly, a meeting was held between UNICEF and MoE to agree on the actions and measures needed to identify the schools that need to be double-shifted and those which may require additions of prefabs in order to be able to accommodate the increasing numbers of Syrian students. The UNICEF-MoE meeting delved into specific concerns regarding 70 severely overcrowded schools in Irbid governorate which require immediate double-shifting to accommodate students. The total number of Syrian and Jordanian students (51 per cent Syrian) who received remedial education in host communities through UNICEF/Madrasati was 4,024 (52 per cent female). As for the academic progress, based on students' scores in their own schools and entry tests, 70 per cent of the Jordanian and Syrian students demonstrated improvements in taught subjects across all grades, while the parents gave the same feedback, in particular the level of literacy and numeracy in Arabic and English. Health The immunization of newly-arrived Syrian refugees against measles and polio and provision of vitamin A in Za'atari and EJC camps continues, conducted by IOM with UNICEF technical support. Measles vaccination is provided to refugees aged 6 months to 30 years, polio (OPV) to children 0-59 months, and vitamin A supplementation to children aged 6-59 months. Since IOM has started vaccinating new arrivals (16 April), 43,214 children (six months to 15 years of age and adults 16 – 30 years) have been vaccinated against measles and 12,702 children (0-5 years) against polio. In addition, 11,724 children (6-59 months) were provided with vitamin A supplements. During the last two weeks, 267 children under five years old visited the eight Oral Rehydration Therapy corners established in Za'atari. The majority were cases of watery diarrhoea with no dehydration, while five were referred to health facilities and Diarrheal Treatment Units (DTUs) for further assessment. A total of 150 Oral Rehydration Solution (ORS) sachets were distributed to children after a demonstration of how to make ORS and dissemination of key messages on how to prevent diarrhoea, importance of hand washing, personal hygiene and environmental sanitation issues.
Nutrition During the last two weeks, 1,054 mothers and 463 children under five visited the four UNICEF/Save the Children Jordan
(SCJ) Infant and Young Child Feeding (IYCF) caravans in Za'atari and EJC camps. In addition, 2,174 nutritional snacks were distributed
to children under 5 and lactating mothers. Through this project, UNICEF/SCJ provides nutritional support and guidance, including
breastfeeding promotion, complementary child feeding, one-to-one counselling and health education sessions for pregnant/lactating
women in the camp. In addition, the preparation for establishment IYCF caravan in four identified locations in Azraq camp is on-going.
Monitoring and Evaluation
UNICEF is in the process of strengthening its team of Field Monitors, bringing the total number of field monitoring staff to five by the
end of August 2013. The Field Monitors track activities of UNICEF and its partners by carrying out regular service delivery spot checks
and collecting feedback from beneficiaries through focus group discussions. They can also respond rapidly to specific monitoring
requests from UNICEF's programme sections, e.g. for special initiatives such as immunization campaigns or for supply chain
monitoring. 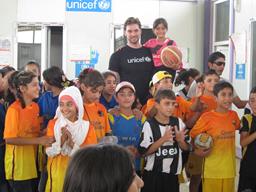 NJOG 2008 May-June; 3(1): 3 - 9 New concepts in pathogenesis and management of polycystic ovarian syndrome: Insulin resistance and role of insulin sensitizers Rashmi Prasad Yadav National Academy of Medical Sciences, Bir Hospital. AbstractPolycystic ovarian syndrome (PCOS) is classically characterized by the clinical triad of androgen excess,anovulation infertility and obesity. Anovulation occurs due to functional ovarian and/or adrenalhyperandrogenism. The etiology and patho physiology of PCOS is unknown .Proposed theories includeexcess of gonadotropins; the effect of which is amplified by disturbances in intrinsic regulatory peptides, suchas inhibin or extrinsic regulatory peptides, such as insulin or insulin like growth factor ( IGF). For over 25years insulin resistance has been known to be associated with PCOS. Improvement in insulin resistance withthe use of insulin sensitizers, such as metformin and thiazoldinediones (TZDs) have been seen to be associatedwith better ovulation and reduced testosterone levels in patients with PCOS.

A Weekly FAX from the Center for Substance Abuse Research CESAR FAX Buprenorphine Series March 31, 2003 to December 15, 2014 (updated January 9, 2015) Center for Substance Abuse Research University of Maryland 4321 Hartwick Road, Suite 501 College Park, MD 20740 301-405-9770 (phone) 301-403-8342 (fax) CESAR is pleased to provide this compilation of CESAR FAX issues focusing on buprenorphine. While research indicates that buprenorphine is an effective drug for treating opioid dependence, we feel that the potential for its nonmedical use and related unintended consequences may be going unnoticed. The most recent CESAR FAX issues on buprenorphine were designed to highlight indicators of the increased availability, diversion, and misuse of buprenorphine. CESAR will continue to monitor the diversion and abuse of buprenorphine and report on developments as they arise.