Advance Access Publication 19 April 2006 eCAM 2006;3(3)373–377 Evaluating Effects of Aromatherapy Massage on Sleep in Childrenwith Autism: A Pilot Study School of Psychology, University of Reading and Berkshire Healthcare NHS Trust, UK Previous studies have found beneficial effects of aromatherapy massage for agitation in people withdementia, for pain relief and for poor sleep. Children with autism often have sleep difficulties, and itwas thought that aromatherapy massage might enable more rapid sleep onset, less sleep disruptionand longer sleep duration. Twelve children with autism and learning difficulties (2 girls and 10 boysaged between 12 years 2 months to 15 years 7 months) in a residential school participated in a withinsubjects repeated measures design: 3 nights when the children were given aromatherapy massage withlavender oil were compared with 14 nights when it was not given. The children were checked every30 min throughout the night to determine the time taken for the children to settle to sleep, the numberof awakenings and the sleep duration. One boy's data were not analyzed owing to lengthy absence.
Repeated measures analysis revealed no differences in any of the sleep measures between the nightswhen the children were given aromatherapy massage and nights when the children were not givenaromatherapy massage. The results suggest that the use of aromatherapy massage with lavender oilhas no beneficial effect on the sleep patterns of children with autism attending a residential school.
It is possible that there are greater effects in the home environment or with longer-term interventions.
Keywords: Aromatherapy – massage – autism – sleep – children What is the Evidence for Aromatherapy? of massage interventions alone have clearly established bene-ficial effects in chronic pain and situations where muscle A recent review of the evidence for sensory stimulation in relaxation is required (9). In an experimental study published dementia care suggests that aromatherapy with lemon balm last year, Kuriyama and co-workers were unable to identify or lavender oil decreases agitation in patients with dementia psychological effects of aroma over that of the massage alone, (1). In other populations there are anecdotal reports of the but did find physiological effects of aromatic oils over and effectiveness of aromatherapy in calming people with autistic above that of the carrier oil massage (9). In this investigation spectrum disorders (2) and helping people sleep (3) and relax we sought to demonstrate the effects of an aromatherapy (4), although a systematic review of the field found little satis- factory evidence for the claims (5). Nevertheless, one of thereview authors claimed that there was good evidence for arelaxing effect (6).
How could Aromatherapy Massage help The situation is complicated by the fact that aromatherapy is Children with Autism? often delivered as a massage, and research studies have notidentified clearly which is the active ingredient (7,8). Trials Children with autism have problems establishing a regulardiurnal pattern and in remaining asleep through the night(11–13). Some of these difficulties may be owing to over For reprints and all correspondence: Dr Tim Williams, Department of arousal or agitation. Given the effects of aromatherapy Psychology, Berkshire Healthcare NHS Trust, 3/5 Craven Road, massage in dementia and the wider claims of the effects of Reading, RG1 5LF. Tel: þ44-118-931-5800; Fax: þ44-118-975-0297; aromatherapy on sleep and arousal, we sought to examine  2006 The Author(s).
This is an Open Access article distributed under the terms of the Creative Commons Attribution Non-Commercial License commons.org/licenses/by-nc/2.0/uk/) which permits unrestricted non-commerical use, distribution, and reproduction in any medium, provided the original work is properly cited. 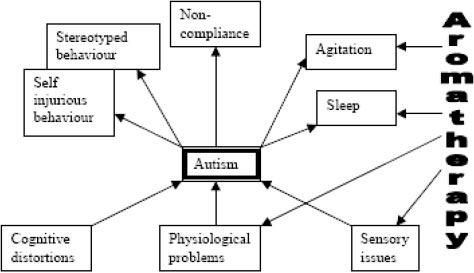 Neuropathy Treatment Myths Revealed Millions of people suffer daily from the pain associated with peripheral neuropathy. If you or someone you know is looking for relief, then this important message might help change everything. What is Neuropathy?Think of the lack of sensation felt when touching something while wearing gloves, or