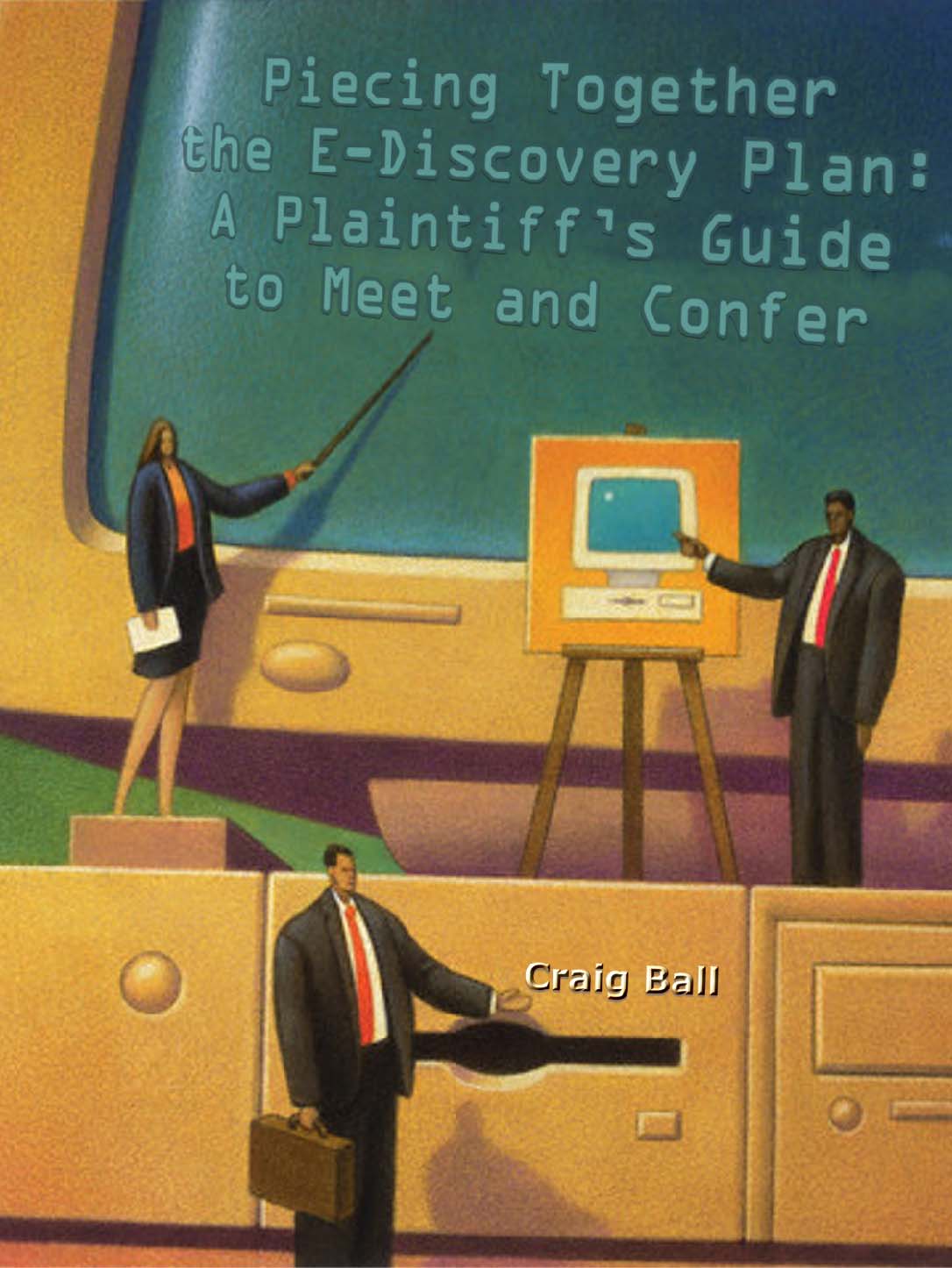 The states are rapidly adopting rules of procedure and local practice like the Rule 26(f) meet
and confer;3 but even where no such rule exists, state judges often find the federal e-
discovery model instructive and grant motions to compel parties to confer on ESI issues. 4
Sizing Up The Opposition
Opponents weaned on a scorched earth, "take no prisoners" approach to litigation aren't
adapting well to the requisite openness and collaboration of meet and confer. They won't tell
you how they identified and collected responsive data. They'll refuse to share custodial
questionnaires or disclose keywords and filtering mechanisms. Deal with them by making
your record and seeking the court's intervention. Angry judges, sanctions and unhappy
clients are the Darwinian factors bringing about the extinction of Obstructasaurus Lex.
Obstructive opponents aren't your only obstacle. Well-intentioned producing parties present
challenges, too, and tend to split into three camps:
Those who accept the duty to preserve and produce ESI, want to do it right,
but don't know how: These opponents are ill-equipped to guide preservation or
ask the right questions. Here, be prepared to fill the knowledge gap in a non-
threatening manner—a daunting challenge in a profession where few are willing to
admit weakness—or find ways to convince your opponent to get expert help.
Bringing your own expert to conferences or hearings helps the other side see they
are in over their heads.
Those who accept the duty, but know only one way to deal with ESI: These
opponents have settled on an approach that worked for them in another case and
are determined to employ it in every case. Their method might entail, e.g., over-
reliance on custodial collection or a blind devotion to TIFF image production, even
when it destroys the integrity of the evidence. Here, you need to understand their
approach and determine if it's going to work. If not, be prepared to demonstrate
where it falls short and offer suitable alternatives. The right solution may be a hybrid
production integrating alternative techniques for categories of ESI that don't lend
themselves to the other side's approach.

Those who accept the duty, want to do it right and know how: Here, the onus is
on you to meet them on the level playing field, so know what you need and be
prepared to settle on reasonable and effective methods to identify, preserve, select
and produce the information without undue burden or cost. Be ready, and be
reasonable.

Preparing for Meet and Confer
E-discovery duties are reciprocal. Just A cardinal rule for electronic discovery is
because your client has little electronic to tell your opponents what you seek,
evidence, you must nonetheless act to plainly and clearly. They may show up
preserve and produce it. At meet and empty-handed, but not because you failed
confer, be prepared to answer many of the
to set the agenda. same questions you'll pose. Meet and confer is more a process than an event. Lay the foundation for a productive process by communicating your expectations. Send a letter to opposing counsel a week or two prior to each conference identifying the issues you expect to cover and sharing the questions you plan to ask. If you want client, technical or vendor representatives in
attendance, say so. If you're bringing a technical or vendor representative, tell them. Give a
heads up on the load file specification you want used or keywords you want searched, if only
to let the other side know you've done your homework. True, your requests may be ignored
or even ridiculed, but it's not an empty exercise. A cardinal rule for electronic discovery,
indeed for any discovery, is to tell your opponent what you seek, plainly and clearly. They
may show up empty-handed, but not because you failed to set the agenda.
The early, extensive attention to electronic evidence may nonplus lawyers accustomed to the
pace of paper discovery. Electronic records are ubiquitous. They're more dynamic and
perishable than their paper counterparts, require special tools and techniques to locate and
process and implicate daunting volumes and multifarious formats. These differences
necessitate immediate action and unfamiliar costs. Courts judge harshly those who shirk
their electronic evidence obligations.
Questions for Meet and Confer
The following exemplar questions address the types and varieties of matters discussed at
meet and confer. They're neither exhaustive nor tailored to the unique issues in your case.
They're offered as talking points to stimulate discussion, not as a rigid agenda and certainly
not as a form for discovery.

1. What's the case about?
Relevance remains the polestar for discovery, no matter what form the evidence takes. The
scope of preservation and production should reflect both claims and defenses. Pleadings
only convey so much. Be sure the other side understands your theory of the case and the
issues you believe guide their retention and search.

23. What forms of production are offered or sought?
Notably, the 2006 Federal Rules amendments gave requesting parties the right to designate
the form or forms in which ESI is to be produced. A responding party may object to
producing the designated form or forms, but if the parties don't subsequently agree and the
court doesn't order the use of particular forms, the responding party must produce ESI as it is
ordinarily maintained or in a form that is reasonably usable. Moreover, responding parties
may not simply dump other forms on the requesting party, but must disclose the other forms
before making production so as to afford the requesting party the opportunity to ask the court
to compel production in the designated form or forms.11
Options for forms of production include native file format, quasi-native forms (e.g., a partial
export of data from a database), imaged production (PDF or, more commonly, TIFF images
accompanied by load files containing searchable text and metadata), hosted (online)
production and even paper printouts for small collections. It is not necessary—and rarely
advisable—to employ a single form of production for all items; instead, tailor the form to the
data in a hybrid production. TIFF and load files may suffice for simple textual content like e-
mail or word processed documents, but native forms are best for spreadsheets and essential
for audio and video. Quasi-native forms are well-suited to e-mail and databases.
A requesting party uncertain of what he needs plays into the other side's hands. You must
be able to articulate both what you seek and the form in which you seek it. The native forms
of ESI dictate the optimum forms for its production, but rarely is there just one option. The
alternatives entail trade offs, typically sacrificing utility of electronic information to make it
function more like paper documents. Before asking for anything, know how you'll house,
review and use it. That means "know your review platform."12 That is, know the needs and
capabilities of the applications or tools you'll employ to index, sort, search and access
electronic evidence.
24. How will you handle redaction of privileged, irrelevant or confidential content?
Defendants often seek to redact ESI in the way they once redacted paper documents: by
blacking out text. To make that possible, ESI are converted to non-searchable TIFF images
in a process that destroys electronic searchability. So after redaction, electronic searchability
must be restored by using OCR to extract text from the TIFF image.
A TIFF-OCR redaction method works reasonably well for text documents, but it fails
miserably applied to complex and dynamic documents like spreadsheets and databases.
Unlike text, you can't spell check numbers, so the inevitable errors introduced by OCR make
it impossible to have confidence in numeric content or reliably search the data. Moreover,
converting a spreadsheet to a TIFF image strips away its essential functionality by jettisoning
the underlying formulae that distinguishes a spreadsheet from a table.

11 Fed. R. Civ. P. 34(b)
12 If a question about your review platform gives you that deer-in-headlights look, you're probably not ready for
meet and confer. Even if you're determined to look at every page of every item they produce, you'll still need a
system to view, search and manage electronic information. If you wait until the data start rolling in to pick your
platform, you're likely to get ESI in forms you can't use, meaning you'll have to expend time and money to
convert them. Knowing your intended platform allows you to designate proper load file formats and determine if
you can handle native production.
Choosing the right review platform for your practice requires understanding your work flow, your people, the way
you'll search ESI and the forms in which the ESI will be produced. A platform geared to review of ESI in native
formats must be able to open the various types of data received without corrupting its content or metadata. ESI
can be like Russian nesting dolls in that a compressed backup file (.BKF) may hold an encrypted Outlook e-mail
container (.PST) that houses a message transmitting a compressed archive (.ZIP) attachment containing an
Adobe portable document (.PDF). Clearly, a review platform needs to be able to access the textual content of
compressed and proprietary formats and drill down or "recurse" through all the nested levels.
There are many review platforms on the market, including the familiar Concordance and Summation
applications, Internet-accessible hosted review environments and proprietary platforms marketed by e-discovery
service providers touting more bells and whistles than a Mardi Gras parade.
Review platforms can be cost-prohibitive for some practitioners. If you don't currently have one in-house, your
case may warrant hiring a vendor offering a hosted platform suited to the ESI. When tight budgets make even
that infeasible, employ whatever productivity tools you can cobble together on a shoestring. You may have to
forego the richer content of native production in favor of paper-like forms such as Tagged Image File Format
(TIFF) images because you can view them in a web browser.
13 Courts have sanctioned ESI discovery abuse for actions characterized as intentional deception: Qualcomm
Inc. v. Broadcom Corp., 2008 WL 66932 (S.D. Cal. Jan. 7, 2008); gross negligence: Phoenix Four, Inc. v.
Strategic Res. Corp., 2006 WL 2135798 (S.D.N.Y. Aug. 1, 2006); "reckless disregard:" United Med. Supply Co.,
Inc. v. United States, 77 Fed. Cl. 257 (2007); "purposeful sluggishness:" In re Seroquel Prods. Liab. Litig., 2007
WL 2412946 (M.D. Fla. Aug. 21, 2007); "foot dragging:" Toussie v. County of Suffolk, 2007 WL 4565160
(E.D.N.Y. Dec. 21, 2007) and negligence: Finley v. Hartford Life and Acc. Ins. Co., 2008 WL 509084 (N.D. Cal.
Feb. 22, 2008). Increasingly, courts regard the duty to preserve and produce ESI as one mutually shared by
client and counsel, and refuse to accept ignorance on either's part as an excuse. See, e.g., Qualcomm Inc. and
Phoenix Four, Inc.