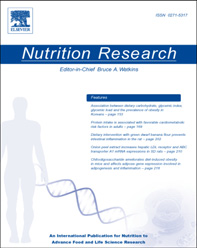 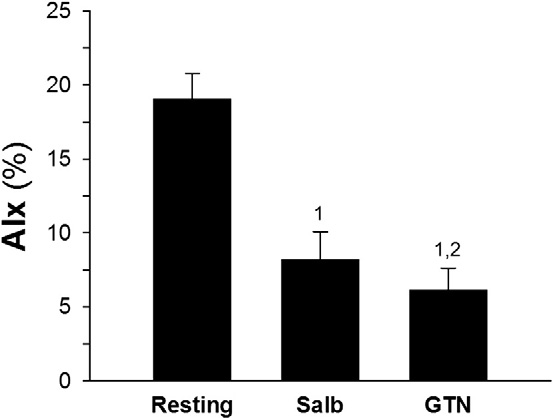 decrease in AIx was not found to significantly differ from theplacebo group. Therefore, we rejected our original studyhypothesis that, compared to a placebo, regular CJC consump-tion reduces AIx. However, we feel that the significant within-group decrease in AIx following CJC consumption cannot beoverlooked and may need to be further investigated.
Our results are in apparent contradiction with recent observations in coronary patients showing that chronic CJCconsumption reduced carotid-femoral pulse wave velocitywhich is recognized as a clinically relevant measure of arterialstiffness . Daily consumption of 400 mL of polyphenol-richdealcoholized red wine for a period of 6 weeks has also beenassociated with a decrease in AIx in postmenopausal women. Differences in the populations under study as well as in Fig. 1 – Baseline augmentation index (AIx) of the 35 men the design of these previous studies and the one we describe measured at rest as well as following oral administration of herein may account for these apparent discrepancies. For Salb and glyceryl trinitrate (GTN). Data are presented as instance, Dohadwala et al used a CJC containing 54% juice means ± SEM. 1 Significantly different from resting values while we provided our subjects with CJC containing 27% juice.
(P < .0001) 2 Significantly different from salbutamol values Our choice to use the 27% juice was based on the fact that (P < .05).
when the study was conducted, the 54% CJC was not marketedin Canada. Further, Naissides et al tested the effects ofdealcoholized red wine over a period of 6 weeks compared to significant differences in the effects of the intervention (PJ vs.
our study which lasted only 4 weeks.
CJC) on the metabolic markers of MetS− or MetS+ individuals.
Studies have suggested a cause/effect relationship between endothelial NO production and arterial stiffness . Salb, aα-adrenoceptor agonist, has been shown to reduce AIx through the stimulation of NO release by endothelial cellsand thus, the vascular response to salbutamol is considered as Dietary FAV intake is negatively associated with the risk of a marker of endothelium-dependent vasodilation. In addition, CVD , an observation that is explained, at least partly, endothelium-independent vasodilation can be measured by the polyphenolic compounds present in FAV that are through the vasodilatory response to NO donors like GTN, known to regulate antioxidant and anti-inflammatory mech- leading to relaxation of smooth muscle cells As presented anisms improving the vascular function. Cran- above, although chronic consumption of CJC has been reported berries are rich in polyphenols and results from the to beneficially impact carotid-femoral pulse wave velocity present 4-week placebo-controlled double-blind crossover no chronic effect of CJC on flow-mediated dilation measures trial in healthy overweight men indicate that although CJC was reported in the same study suggesting no improvement of consumption did reduce resting AIx in overweight men, this arterial vasodilatory function. Furthermore, a 4-month daily Table 3 – Changes in hemodynamic variables and AIx values in the 35 men effect Placebo vs. CJC Heart rate (beats/min) Systolic BP (mm Hg) Diastolic BP (mm Hg) Δ AIx salbutamol (%) Global endothelial Uric acid (mg/dL) Oxidized LDL (U/L) sE-selectin (ng/mL) Results are presented as means ± SD.
BP, blood pressure.
Proc MIXED with adjustments for treatment sequence and baseline value.