SCHIZOPHRENIA IS NOT RARE: NO ONE IS IMMUNE • Schizophrenia is found all over the world—in all races, in all cultures and in all social classes • It affects 1 in 100 people worldwide. That's approximately 40,000 of our BC neighbours  or 290,000 fellow Canadians MEN AND WOMEN ARE AFFECTED WITH EQUAL FREQUENCY • For men, the age of onset for schizophrenia is often ages 16 to 20 • For women, the age of onset is sometimes later—ages 20 to 30 WE ARE ALL AFFECTED • More hospital beds in Canada (8%) are occupied by people with schizophrenia than by sufferers of any other medical condition • The cost to Canadian society due to hospitalization, disability payments, welfare payments, and lost wages ranks in the billions of dollars annually • Other costs—such as loss of individual potential, personal anguish, and family hardships—are impossible to measure. British Columbia Schizophrenia Society  1 WHAT CAUSES SCHIZOPHRENIA? "We do not yet understand precisely the cause of schizophrenia, but research is progressing rapidly." — Seeman, Littmann, et al.
Researchers now agree thatwhile we do not yet know what "causes"
schizophreniamany pieces of the puzzle are becoming clearer. Areas of
study and interest are:

• BIOCHEMISTRY  People with schizophrenia appear to have a
neurochemical imbalance. Thus, some researchers study the neuro-
transmitters that allow communication between brain cells. Modern
antipsychotic medications now primarily target three different neurotransmitter
systems (dopamine, serotonin, and norepinephrine.)
• CEREBRAL BLOOD FLOW  With modern brain imaging techniques (PET
scans), researchers can identify areas that are activated when the brain is
engaged in processing information. People with schizophrenia appear to have
difficulty "coordinating" activity between different areas of the brain. For
example, when thinking or speaking, most people show increased activity in
their frontal lobes, and a lessening of activity in the area of the brain used for
listening. People with schizophrenia show the same increase in frontal lobe
activity—but there is no decrease of activity ("dampening" or "filtering") in the
other area. Researchers have also been able to identify specific areas of
unusual activity during hallucinations.

• MOLECULAR BIOLOGY  People with schizophrenia have an irregular pattern
of certain brain cells. Since these cells are formed long before a baby is born,
there is speculation that:
1. This irregular pattern may point towards a possible "cause" of schizophrenia in the prenatal period; or 2. The pattern indicates a predisposition to acquire the disease at a • GENETIC PREDISPOSITION  Genetic research continues, but has not yet positively identified a hereditary gene for schizophrenia. Schizophrenia does appear more regularly in some families. Then again, many people with schizophrenia have no family history of the illness. British Columbia Schizophrenia Society  2
• STRESS  Stress does not cause schizophrenia. However, it has been
proven that stress makes symptoms worse when the illness is already
present.

"NEVER become a moth around the flame of self-blame. It can
destroy your chance of coping, forever. It can destroy you."
— Dr. Ken Alexander, 14 Principles for the Relatives British Columbia Schizophrenia Society  11 THE "BLAME AND SHAME" SYNDROME "People do not cause schizophrenia; they merely blame each other for doing so." — E. Fuller Torrey, MD. Unfortunately, there is a common tendency among people with schizophrenia and their family members to blame themselves or to blame one another. Sisters and brothers often share the same worries and fears as their parents. In the following story, a parent describes "blame and shame" from personal experience. "I have two sons. My older son is 22 and is in an advanced stage of muscular dystrophy. My younger son is 21 and has been diagnosed as chronically mentally ill. The son who is physically disabled has many special needs. He gets emotional support everywhere he turns. His handicap is visible and obvious and the community, family and friends open their hearts to him and go out of their way to make his life better. My other son, on the other hand, has been misunderstood and shunned by all. He is also terribly disabled.but his disability is not visible. His grandparents, aunts, uncles and cousins all think that he's lazy, stupid, weird and naughty. They suggest that somehow, we have made some terrible mistake in his upbringing. When they call on the phone they ask how his brother is and talk to his brother but they never inquire about him. He upsets them. They also wish that he'd go away." —Excerpt from Alliance for the Mentally Ill of Southern Arizona Newsletter
"Compassion follows understanding. It is therefore incumbent on us
to understand as best we can. The burden of disease will then
become lighter for all."  Dr. E. Fuller Torrey


British Columbia Schizophrenia Society  12 HOW FAMILIES CAN HELP 1. LEARN TO RECOGNIZE SYMPTOMS When odd behaviour is experienced or observed, it makes good sense to seek advice from a doctor. An acute episode may happen suddenly, or symptoms may develop over a period of time. The following symptoms are important: • Marked change in personality • A constant feeling of being watched • Difficulty controlling one's thoughts • Hearing voices or sounds others don't hear • Increasing withdrawal from social contacts • Seeing people or things that others don't see • Difficulties with language—words do not make sense • Sudden excesses, such as extreme religiosity • Irrational, angry, or fearful responses to loved ones • Sleeplessness and agitation These symptoms, even in combination, may not be evidence of schizophrenia. They could be the result of injury, drug use, or extreme emotional distress (a death in the family, for example.) The crucial factor is the ability to turn off the imagination. 2. GET PROPER MEDICAL HELP
• TAKE THE INITIATIVE. IF SYMPTOMS OF SCHIZOPHRENIA ARE OCCURRING, ASK
YOUR DOCTOR FOR AN ASSESSMENT OR REFERRAL. Family members are usually the first to notice symptoms and suggest medical help. Remember, if the ill
person accepts hallucinations and delusions as reality, they may resist
treatment.
• BE PERSISTENT. FIND A DOCTOR WHO IS FAMILIAR WITH SCHIZOPHRENIA.
The assessment and treatment of schizophrenia should be done by people
who are well-qualified. Choose a physician who has an interest in the illness,
who is competent and has empathy with patients and their families.
Remember—if you lack confidence in a physician or psychiatrist, you always
have the right to seek a second opinion.
British Columbia Schizophrenia Society  13
• ASSIST THE DOCTOR/PSYCHIATRIST. Patients with schizophrenia may not be
able to volunteer much information during an assessment. Talk to the doctor
yourself, or write a letter describing your concerns. Be specific. Be persistent.
The information you supply can help the physician towards more accurate
assessment and treatment.
• OTHER SOURCES OF ASSESSMENT AND TREATMENT: The Ministry of Health is
the government department responsible for Mental Health Services in British
Columbia. Assessment and treatment are available through regional Mental
Health centres throughout the province. Check your phone book, or call the
BC Schizophrenia Society to find the one nearest you.
TIPS FOR FIRST CONTACT! ! Rehearse before you call. State what you need clearly and briefly. ! Make a note of the names of the people you talk to, along with the date and approximate time. ! If you cannot get the help or information you need, ask to speak to a case manager, supervisor, or the person in charge. ! If you cannot immediately reach the doctor or case manager, ask when you may expect a return call, or when the person will be free for you to call back. British Columbia Schizophrenia Society  14
3. MAKING THE MOST OF TREATMENT
There may be exchanges between doctor and patient that the patient feels are of a highly personal nature and wants to keep confidential. However, family members need information related to care and treatment. You should be able to discuss the following with the doctor: • Signs and symptoms of the illness • Expected course of the illness • Treatment strategies • Signs of possible relapse • Other related information
Provide plenty of support and loving care. Help the person accept their
illness. Try to show by your attitude and behaviour that there is hope, that the
disease can be managed, and that life can be satisfying and productive.
Help the person with schizophrenia maintain a record of information on:
• Symptoms that have appeared • All medications, including dosages • Effects of various types of treatment 4. LEARN TO RECOGNIZE SIGNS OF RELAPSE Family and friends should be familiar with signs of "relapse"—where the person may suffer a period of deterioration due to a flare up of symptoms. It helps to know that relapse signs often recur for an individual. These vary from person to person, but the most common signs are: • Increased withdrawal from activities • Deterioration of basic personal care. You should also know that: • Stress and tension make symptoms worse • Symptoms often diminish as the person gets older.
5. MANAGING FROM DAY TO DAY 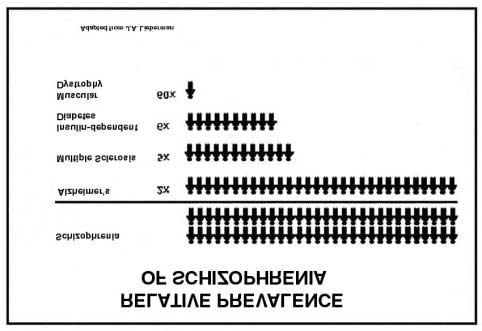