THE NEW ENGLAND JOURNAL OF MEDICINE Nevertheless, in addition to medical therapy, a varietyof endoscopic, radiologic, and surgical procedures have been used to relieve the mechanical obstruction of thebile ducts that the disease produces. The availability ofliver transplantation has also greatly improved pa-tients' prospects for long-term survival.
PRIMARY SCLEROSING CHOLANGITIS
OUNG-MEE LEE, M.D., AND MARSHALL M. KAPLAN, M.D.
Thickening and induration of the common bile duct, seen at laparotomy, are characteristic of primary scle- PRIMARY sclerosing cholangitis, a chronic chole- rosing cholangitis.32 In early stages of the disease, the static liver disease of unknown cause, is character- liver may appear grossly normal. However, as the con- ized by ongoing inflammation, destruction, and fibro- dition progresses, the liver becomes coarsely nodular sis of intrahepatic and extrahepatic bile ducts.1-4 Over and stained with bile.
time, bile ducts become irregularly narrowed and oblit- Four histologic stages of primary sclerosing cholan- erated, and small intrahepatic ducts disappear. Focal gitis have been identified.32 Stage 1 represents the ini- bile-duct dilatation proximal to areas of stricture pro- tial lesion; the other stages presumably develop with duces a characteristic beaded appearance on cholan- time and the progression of the disease. Stage 1 is char- giography.5,6 Primary sclerosing cholangitis, although acterized by the degeneration of epithelial cells in the only about 1 percent as common as alcoholic liver bile duct and by infiltration of the bile duct by lympho- disease,7,8 is the fourth leading indication for liver cytes and, occasionally, neutrophils. There is inflamma- transplantation in adults in the United States.9 The dis- tion, scarring, and enlargement of the portal triads ease progresses silently, but relentlessly, in most pa- and, at times, portal edema. At stage 1, however, these tients and leads to cirrhosis, portal hypertension, and findings are not present outside the portal triads (Fig.
liver failure.10,11 1A and 1B). In some cases, there may be proliferation Seventy percent of patients with primary sclerosing of bile ducts in the portal triads, vacuolation of ductu- cholangitis are men, and the mean age at diagnosis is lar epithelial cells, and the formation of onionskin le- 39 years.12 The disease typically occurs in patients with sions, concentric layers of connective tissue surround- inflammatory bowel disease, but it may also occur alone ing bile ducts (Fig. 1C and 1D).33 Primary sclerosing or in association with retroperitoneal or mediastinal fi- cholangitis typically involves less inflammation in the brosis.13 Of the approximately 75 percent of patients portal triads than other chronic cholestatic liver diseas- with primary sclerosing cholangitis who have inflam- es, such as primary biliary cirrhosis. In stage 2, the le- matory bowel disease, about 87 percent have ulcerative sion is more widespread. The fibrosis and inflammation colitis and 13 percent Crohn's disease.14-21 Seen anoth- infiltrate the periportal parenchyma, where they even- er way, 2.5 to 7.5 percent of patients who present with tually destroy periportal hepatocytes in piecemeal ne- ulcerative colitis have, or will have, primary sclerosing crosis. Portal triads are often enlarged. Bile ductopenia cholangitis.22-24 The true frequency of primary scleros- is a prominent feature; concentric periductal fibrosis is ing cholangitis in patients with ulcerative colitis may less obvious. As the disease progresses to stage 3, por- actually be higher. Some patients who, in fact, have pri- tal-to-portal fibrous septa form. Bile ducts disappear mary sclerosing cholangitis may not undergo cholangi- or undergo severe degenerative changes. Cholestasis ography because they are asymptomatic and the results may be prominent, primarily in periportal and para- of their biochemical tests of liver function are only min- septal hepatocytes. Stage 4, the end stage, is charac- imally abnormal. The prevalence of ulcerative colitis in terized by frank cirrhosis; the histologic features dif- the United States is estimated to range from 40 to 225 fer little from those seen in other forms of that disease.
per 100,000.25,26 On the basis of this figure, the preva- In primary sclerosing cholangitis, however, there may lence of primary sclerosing cholangitis would be ap- also be changes associated with large-duct obstruction: proximately 1 to 6 cases per 100,000.
the proliferation and dilatation of interlobular bile At the present time, there is no effective treatment ducts and increased numbers of periportal neutrophils for the disease.4 Preliminary data on drugs such as ursodiol27-29 and methotrexate30,31 show improved re- It is noteworthy that the pathognomonic sign of sults in biochemical tests of liver function, particularly primary sclerosing cholangitis — the onionskin le- decreases in serum alkaline phosphatase levels, as well sions — is rarely seen on percutaneous biopsy of the as occasional improvement in symptoms. However, liver. It is more common to find only a paucity of nor- there are no data to show that these drugs can favor- mal bile ducts and nonspecific fibrosis and inflamma- ably alter the course of primary sclerosing cholangitis.
tion in the portal triads. The diagnosis is thereforeusually made by cholangiography. Histologic exami-nation of the liver is used for confirmation and to de- From the Division of Gastroenterology, New England Medical Center, 750 termine the stage of disease. Since the progress and Washington St., Boston, MA 02111, where reprint requests should be addressedto Dr. Kaplan.
extent of the disease seen in biopsy tissue may vary, The New England Journal of Medicine Downloaded from nejm.org on April 22, 2013. For personal use only. No other uses without permission. Copyright 1995 Massachusetts Medical Society. All rights reserved. 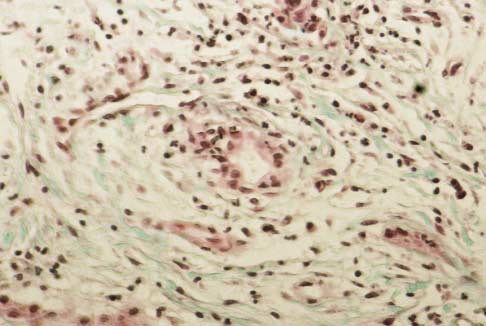 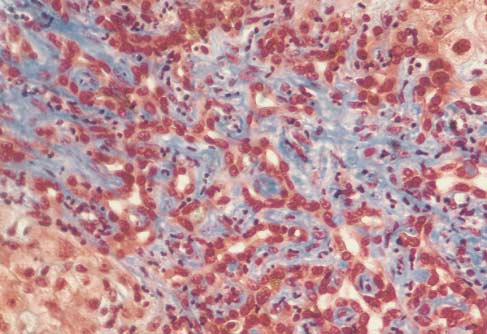 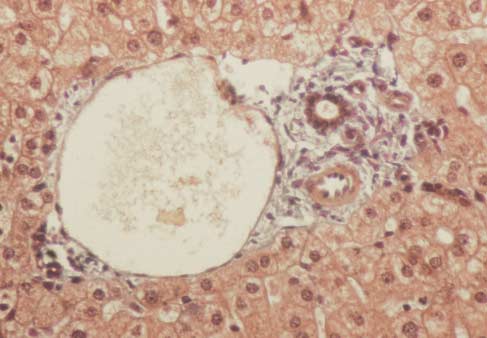 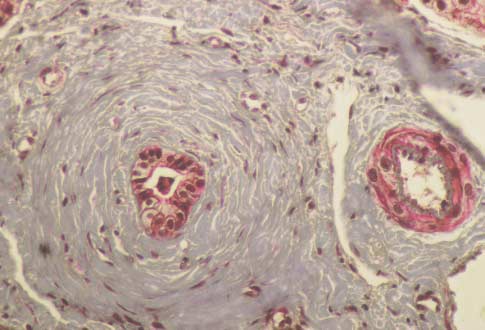 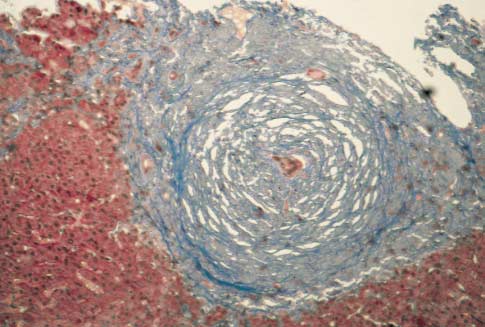 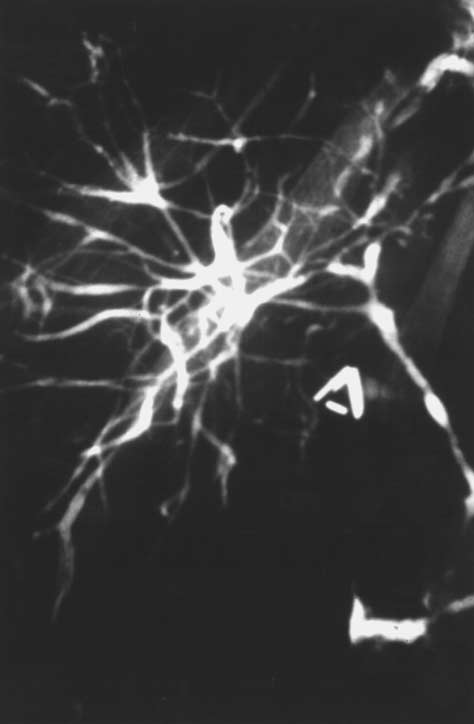 level of serum albumin is normal early in the disease.
Patients with active inflammatory bowel disease, how-ever, have decreased serum levels of albumin, reflect-ing the severity of that illness. In early stages of pri-mary sclerosing cholangitis, serum bilirubin valuesare usually normal, but they gradually increase as thedisease progresses. Occasionally, striking fluctuationsin bilirubin levels may occur even at early stages. Thecause is unknown, but the changes may reflect tran-sient blockage of strictured bile ducts by inflamma-tion, infection, sludge, or small gallstones. Hypergam-maglobulinemia is found in about 30 percent ofpatients, and increased IgM levels in 40 to 50 per-cent.26 Autoantibodies are less frequent than in auto-immune chronic active hepatitis and primary biliarycirrhosis. About 65 percent of patients with primarysclerosing cholangitis have perinuclear antineutrophilcytoplasmic antibodies80 and HLA-DRw52a.64 Anti–smooth-muscle antibodies are present in 11 percent ofpatients and antinuclear antibodies in 6 to 35 percent,but antimitochondrial antibodies are almost never ob-served.26 As in other chronic cholestatic liver diseases,levels of hepatic and urinary copper are increased, asis the serum ceruloplasmin level. Because copper isexcreted primarily in bile, the amount of copper in thebody increases as cholestasis worsens.
Visualization of the biliary tract is essential for mak- ing the diagnosis of primary sclerosing cholangitis. En-doscopic retrograde cholangiopancreatography is themethod of choice. Percutaneous cholangiography istechnically more difficult in patients with the diseasebecause intrahepatic bile ducts are often attenuated orreduced in number. Transhepatic cholangiography is Figure 2. Endoscopic Retrograde Cholangiogram of a 62-Year- performed only if endoscopic retrograde cholangiopan- Old Woman with Primary Sclerosing Cholangitis.
creatography is unsuccessful. The characteristic radio- There are multiple narrowings and dilatations of intra- and extra- logic findings of primary sclerosing cholangitis include hepatic bile ducts.
multifocal strictures and dilatations, usually involvingboth the intrahepatic and extrahepatic biliary tree(Fig. 2). Diffuse strictures with short intervening seg- atograms are normal.83 This disease is probably the ments of normal or dilated bile duct produce the classic same as the condition called pericholangitis in ulcer- beaded appearance. In early stages, the only cholangi- ative colitis.84,85 ographic abnormality may be fine ulcerations of the Although percutaneous liver biopsy may support the common bile duct similar to those seen in the colon in diagnosis of primary sclerosing cholangitis, it is rarely early ulcerative colitis (Fig. 3). In other patients, there definitive. Rather, it is useful in staging and in deter- may be deep ulcerations in the common duct (Fig. 4).
mining the prognosis. Neither histologic examination In our experience with more than 100 patients with pri- nor cholangiography alone will reliably reflect the se- mary sclerosing cholangitis, 87 percent had involve- verity of the disease. Both must be used with blood ment of both intrahepatic and extrahepatic bile ducts, tests and with imaging or endoscopic tests that show 11 percent had involvement of the intrahepatic bile the presence and severity of portal hypertension.
ducts alone, and 2 percent had involvement of only theextrahepatic bile ducts (unpublished data). The gall- bladder and cystic duct are involved in as many as 15 The majority of patients are initially asymptomatic, percent of patients.81,82 but can typically be identified on the basis of abnormal There is one putative variant, called small-duct pri- results on biochemical tests of liver function, particu- mary sclerosing cholangitis, in which the affected bile larly elevated levels of serum alkaline phosphatase or ducts are too small to be seen by cholangiography.
g-glutamyltransferase. These abnormalities persist, and Hence, cholangiograms appear normal. The preva- eventually cholangiography, liver biopsy, or both, are lence of small-duct primary sclerosing cholangitis is performed. Liver-biopsy findings are usually either non- unknown. It is diagnosed in patients with inflammatory specific or suggestive of primary sclerosing cholangitis; bowel disease who have biochemical tests of liver func- the cholangiogram shows the characteristic changes.
tion that show cholestasis and characteristic liver biop- Although asymptomatic, some patients may have sur- sies, but whose endoscopic retrograde cholangiopancre- prisingly advanced disease, as measured both histolog- The New England Journal of Medicine Downloaded from nejm.org on April 22, 2013. For personal use only. No other uses without permission. Copyright 1995 Massachusetts Medical Society. All rights reserved. 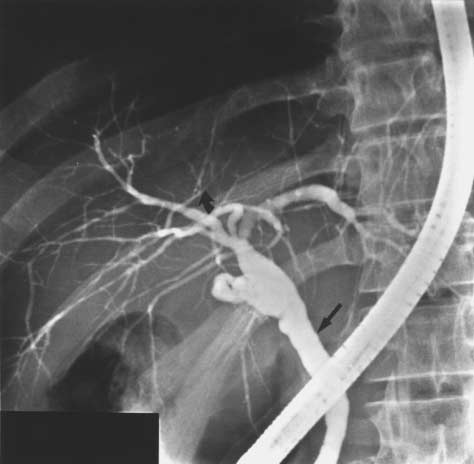 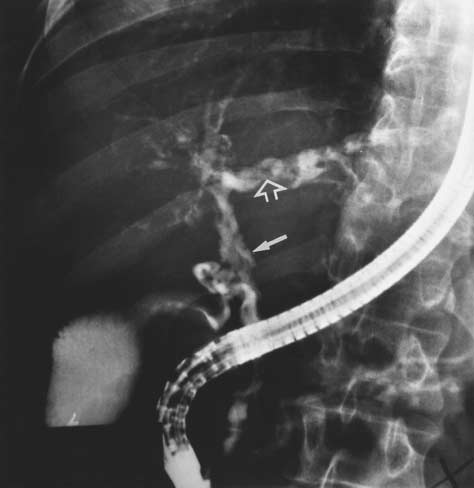 The pharmaceutical industry in Brazil Market overview and trends Overview of the for labor began to stabilize in 2013 and started to lose some of its vigor and there is a feeling among specialists that the market will tend towards a rise in unemployment. Therefore, some reduction in salary levels can be expected in the local