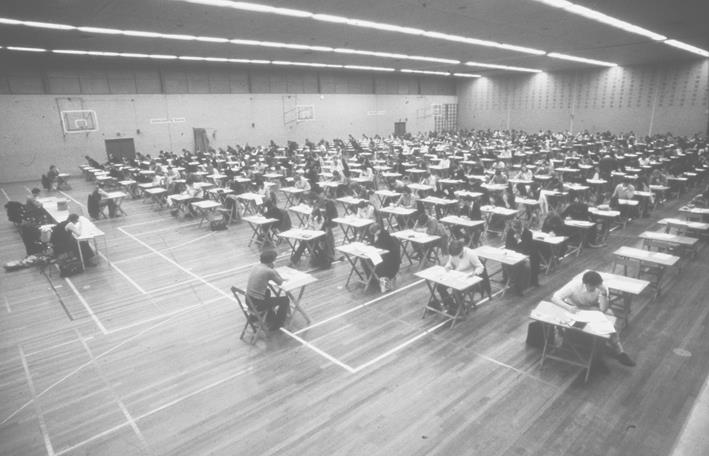 Interuniversity Progress Test for Medicine All rights reserved. All rights to intellectual ownership of the contents of the interuniver-sity progress test and the item bank are with the Medical Faculties of the universities of Amsterdam, Maastricht, Nijmegen, Groningen and Leiden. The use of progress test questions by a party for other purposes than the joint composition of the progress test is only allowed with the prior written permission of the Interuniversity Progress Test Com- mittee (IVC).
Interuniversity Progress Test for Medicine – May 2016 All rights reserved Interuniversity Progress Test for Medicine – May 2016 INSTRUCTIONS FOR ANSWERING QUESTIONS
The consequences of not obeying these instructions are your own
responsibility.
 Always check whether there are any pages missing from the test booklet.
 Use only a soft pencil (HB) on the answer form. Never use other colours or
writing materials.  Answer every question by carefully colouring in the corresponding box on the
answer form (colour in the whole box, do not check it). Do not write outside the box. Example:
 To correct an incorrect answer, erase it and colour in your new choice.
 Answer every question with one answer only. Never colour in more than one
box for one question. If you do not know the answer, choose the question mark.
Do not make any changes to the answer form or add notes. Any marks, folds or damage to the answer form will make it impossible to process. If you disregard the instructions and answer questions improperly or unclearly, so that there is doubt as to what answer you have given, or if you select an answer that does not exist, the answer will be invalid and the question concerned will be regarded as ‘unanswered'. Ask the invigilator for a new answer form if necessary.  First fill in your name and colour in your student number carefully.  Some students opt to note their answers to the test questions in the test booklet first, then copy them to the answer form. You should realize that this could result in your running out of time or making mistakes when copying. Any consequences are your own responsibility.  Each question comprises a stem followed by one or more items: the stem is intended as a statement of fact and always contains correct information. The aim of the test designers has been to formulate questions as unambiguously as possible. Vague words (‘sometimes', ‘often') are specified where necessary, which can result in somewhat artificial sentence constructions. It is not the aim to set trick questions.  Despite extensive evaluation of questions before they are included in a progress test, imperfections cannot be entirely prevented. The progress test evaluation committee wishes to be informed of errors in the content of questions and of questions with ambiguous or multi-interpretable formulations. Students are therefore invited to submit their comments. All comments are reviewed by the Interfaculty Progress Test Evaluation Committee (IVBC). The Committee's findings and conclusions are documented and, if required, discussed with the discipline(s) concerned. This can result in removal of questions from the definitive test (cancelled questions) or in changes in answer keys (key change). When multiple answers are good, the question is not a valid part of the progress test and will be removed. You can only submit comments on interuniversity progress test questions through
the website http://ivtg.nl/, no later than 4 p.m. on the Thursday following the
Progress Test. Comments that surrendered elsewhere is irrelevant and / or does
not meet the guidelines will not be considered. Follow the instructions on the site
All rights reserved Interuniversity Progress Test for Medicine – May 2016
PLEASE FIRST READ THE INSTRUCTIONS ON THE PREVIOUS PAGE
- You are not allowed to use your own paper to make notes. Instead, you may use the
empty pages at the end of this test.
- You can take the test booklet from 10.30 a.m.

From this test you can only submit your comments on interuniversity
progress test questions through the websiElsewhere submitted comments will not be accepted.

The grades that can be awarded for a progress test are fail, pass and good.
Answers are marked as right or wrong. A correct answer scores +1 point. The
deduction for an incorrect answer is 1 divided by the number of possible incorrect answers, i.e.: -1 for a two-choice answer -1/2 for a three-choice answer -1/3 for a four-choice answer -1/4 for a five-choice answer You can of course answer with a question mark, in which case you will score 0 points for that question. The final score for the test is a percentage, which will be calculated as follows for a test comprising 200 questions: Score = (right-wrong)/200 x 100 The answer key and the literature references will be posted on Nestor as soon as possible after 4 p.m. on the day of the test. All rights reserved Interuniversity Progress Test for Medicine – May 2016
GENERAL INFORMATION

Progress tests
The purpose of the Faculty of Medicine's Inter-University Progress Test is to
check the students' knowledge development during their studies. All students of
Medicine therefore take a progress test four times a year. A progress test
comprises a maximum of 200 questions geared to the requirements for the final
physician's assessment. The questions are divided up among a number of
curriculum-based categories and disciplines in line with a fixed distribution formula
(the test blueprint). The blueprint is a guideline; the number of questions in each
category and/or discipline in a particular test may vary from the blueprint. No
rights may be derived from such departures from the guideline.
The questions
The questions are set by question-setting teams from the Faculties of Medicine at
the universities of Maastricht, Nijmegen, Amsterdam, Groningen and Leiden.
The questions are provided with literature references for study purposes.The
references are mainly to books on the reading list of all participating partners.
When it concerns vignette questions we can not always be given a literature
reference , in this case, these provide feedback.
The order of the questions in the test booklet is random. In the answer key you
can read which discipline and category belongs to each question.
View the development of your medical knowledge on the internet
By using the programme ProF you can view the development of your medical
knowledge, as measured by the iPTM, on the internet.You can find out how it
works on the website Students can log in with their student account
( Snumber and password) to obtain access to several charts in which they can
view their own knowledge development, compared to the development of their
peer students. By viewing your knowledge development per category you can
establish the strengths and weaknesses of your development for each cognitive
domain. By doing so you can find out if you need to pay extra attention to certain
subjects.
Note : The official results of the Progress Test are published in the usual way and
never with the program ProF.

Day surgery discharge instructions For medications containing acetaminophen in adults weighing ≥ 50 kg During your procedure, you were given OFIRMEV® (acetaminophen) injection 1000 mg (1 g) for pain control at AM/PM. If you need additional pain medication at home, take as directed by your physican. (checked below) no sooner than It is important that you do not exceed the maximum amount of acetaminophen, 4000 mg (4 g), in the remaining 24 hours.

Victory over cancer – part one: making the unthinkable possible