Neuron, Vol. 35, 1147–1156, September 12, 2002, Copyright 2002 by Cell Press
Human Brain Activity during Illusory
Visual Jitter as Revealed by Functional
Magnetic Resonance Imaging
Yuka Sasaki,1,4 Ikuya Murakami,2
demonstrated to reflect retinal slip due to small eye
Patrick Cavanagh,3 and Roger H.B. Tootell1
movements that are normally kept invisible (Murakami
1Athinoula A. Martinos Center for Biomedical
and Cavanagh, 1998).
This unique illusion suggests a specific way that the
Massachusetts General Hospital
brain may normally cancel the motion signals from small
149 13th Street
eye movements. Murakami and Cavanagh (1998, 2001)
Charlestown, Massachusetts 02129
have proposed that retinal motion signals can be used to
2 Human and Information Science Laboratory
compensate for retinal slip due to small eye movements.
NTT Communication Science Laboratories
They postulate two stages of the process. The first is
an adaptable stage that measures local motion signals,
3-1 Morinosato Wakamiya
and the second is a compensation stage that estimates
Atsugi, Kanagawa 243-0198
retinal slip and subtracts it from motion signals nearby.
Suppose that retinal slip is fully represented in early
3 Vision Sciences Laboratory
visual cortex (Galletti et al., 1984; Gur et al., 1997; Gur
Department of Psychology
and Snodderly, 1987, 1997; Ilg and Thier, 1996; Leopold
and Logothetis, 1998). In this early stage, each retino-
topic point is assumed to have a motion vector (direction
33 Kirkland Street
and speed) that is a mixture of eye movements and
Cambridge, Massachusetts 02138
object motion. One of the missions of a subsequent
processing stage is to suppress the component of eye
movements in this velocity field. It is proposed that a
baseline value (i.e., eye velocity) is estimated by finding
the region having the minimum instantaneous velocity.
One central problem in vision is how to compensate
The minimum velocity will usually arise in regions of the
for retinal slip. A novel illusion (visual jitter) suggests
scene where there is no external motion and, so, will
the compensation mechanism is based solely on reti-
represent the eye movement velocity alone. By sub-
nal motion. Adaptation to visual noise attenuates the
tracting this baseline estimate from the velocities of all
motion signals used by the compensation stage, pro-
points, the desired zero velocity for the stationary re-
ducing illusory jitter due to the undercompensation of
gions and the correct velocity for the moving objects
retinal slip. Here, we investigated the neural substrate
could be recovered.
of retinal slip compensation during this illusion using
This model also explains why the visual jitter illusion
high-field fMRI and retinotopic mapping in flattened
occurs. First, adaptation to dynamic noise desensitizes
cortical format. When jitter perception occurred, MR
motion detectors in the adapted region. This means that
signal decreased in lower stages of the visual system
the retinal slip after adaptation is encoded with a smaller
but increased prominently in area MT⫹. In conclusion,
gain in the adapted region, although there is no change
visual areas as early as V1 are responsible for the
in small eye movements and corresponding retinal slip
adaptation stage, and MT⫹ is involved in the compen-
with and without adaptation. This creates a new baseline
sation stage. The present finding suggests the path-
minimum there. In the unadapted region, the unattenu-
way from V1 to MT⫹ has an important role in stabilizing
ated motion response to eye movements is above this
the visual world.
new, artificially low baseline. Therefore, the retinal slip
occurring in this region is undercompensated and is
perceived as jitter.
Visual jitter clearly differs from the classical motion
Whenever the eyes move, there is concomitant retinal
aftereffect (an illusory motion in the opposite direction
image slip of a stationary outer world at a speed corre-
after adaptation to unidirectional motion [Wohlgemuth,
sponding to the rotation speed of the eyes. Importantly,
1911]). First, jitter occurs in the unadapted region, while
such a retinal slip is usually not noticed. Clearly, the
conventional motion aftereffect is confined within the
brain somehow compensates for retinal slip due to eye
adapted region (Culham et al., 1999; He et al., 1998).
movements in recovering a veridical visual world. How-
Second, the instantaneous speed and direction of jitter
ever, under certain circumstances we can defeat the
are consistent with eye movements during test, whereas
compensation and perceive our own retinal slip. Specifi-
the direction of motion aftereffect is opposite to the
cally, after adaptation to a patch (e.g., an annulus) of
direction of the adapting stimulus. Third, motion afteref-
dynamic random noise, a larger pattern of static random
fect partially transfers across eyes (Ibbotson and Mad-
noise is presented. The static noise in the unadapted
dess, 1994; Murakami, 1995; Wade et al., 1993), but
region then appears to "jitter" coherently in random di-
visual jitter does not (Murakami and Cavanagh, 1998).
rections for several seconds (please access the visual
Therefore, these two types of illusions are distinct from
jitter demonstration [first figure] at http://www.brl.
each other.
ntt.co.jp/people/ikuya/). This jittery motion has been
As described before, the proposed mechanism of the
jitter aftereffect postulates two distinct stages: (1) an
early adaptable stage where local motion signals are 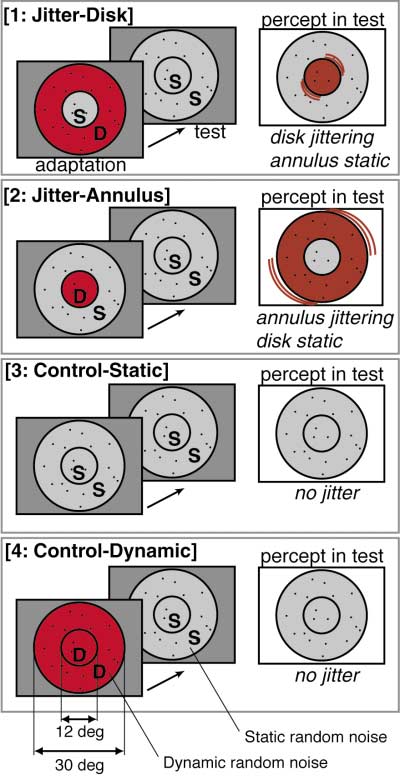 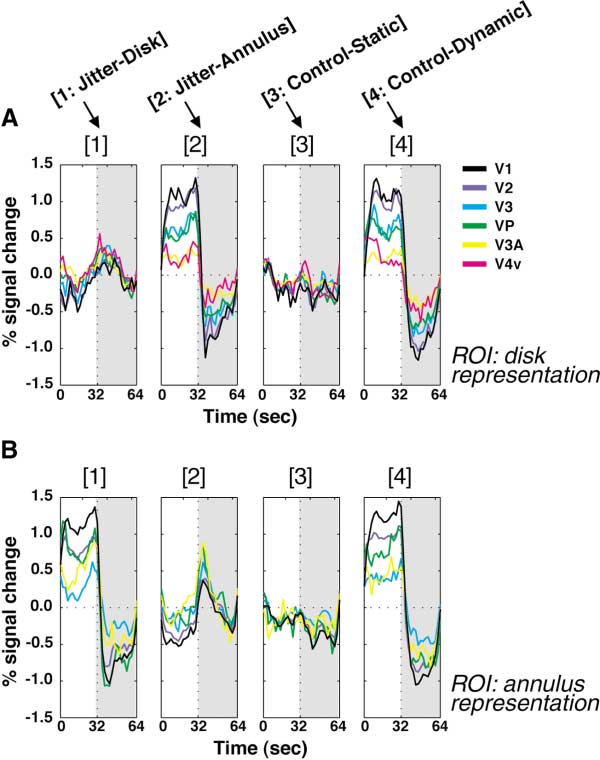 3A), and a relatively steep MR increase was seen in the
annulus representation (Figure 3B). In both conditions,
the MR signals decreased in the representation of the
adapted region after exposure to dynamic random
noise, whereas the unadapted region (where jitter was
perceived) showed an increase of MR signals. We inter-
pret these MR decreases as reflecting the effect of the
dynamic random noise adaptation stimulus. The MR
increases are consistent with the occurrence of jitter in
these regions.

In the retinotopic analysis, both the MR increases
during adaptation and the decreases during the test
period were most prominent in V1 and progressively less
pronounced as the processing stage increased from V1
to V3 or V4v ([2] and [4] of Figure 3A and [1] and [4] of
Figure 3B). In comparison, the positive activity in the
test period was more pronounced as the processing
stage increased ([1] of Figure 3A and [2] of Figure 3B).
Thus, an effect of adaptation was more evident in lower
cortical areas, whereas jitter-consistent activity ap-
peared to increase in higher order motion-selective cor-
tical areas.
Subsequent tests confirmed that the MR signal reduc-
tion during test was larger in V1 than in any other visual
area. MR signals were averaged from adapted regions
(namely, the disk and annulus regions in the control-
dynamic condition, the disk region in the jitter-annulus
condition, and the annulus region in the jitter-disk condi-
Figure 3. Time Course Results of the Retinotopic Analysis
tion) and MR signal intensity was summed during the
MR signal changes are plotted in separate panels for the four condi-
first 10 s of the test period in each subject. A nonpara-
tions. (A) shows the latency-corrected time course of the signal
metric test (p ⬍ 0.01, Friedman test) confirmed that the
change in each visual area (black, V1; purple, V2; cyan, V3; green,
VP; yellow, V3A; magenta, V4v) in the disk representation during
MR signal reduction was largest in V1 in each subject.
adaptation (0–32 s) and subsequent test (32–64 s; indicated by gray).
(B) shows the same analysis for the annulus representation. No
Increased Signals in MT⫹
subject showed activation in the annulus representation in V4v. The
Thus far we have excluded MT⫹ from the analysis be-
ordinate indicates the signal change relative to the average activity
cause the retinotopic analysis is not easily applicable
level across all the conditions; thus its zero level had no functional
to this cortical area (Tootell et al., 1998d). Now we will
meaning. Instead, the virtually flat profiles in the control-static condi-
tion (3) were considered to reflect the baseline activity relative to
compare the nonretinotopic activities of visual areas
which the signal changes were assessed in other conditions.
including MT⫹ by summing up the voxels within each
defined visual area. Figure 4 shows the time course of
the MR signal change in each condition obtained by this
obtained in higher visual areas, albeit with progressively
nonretinotopic analysis. Thus except for area MT⫹, the
data shown here are essentially an average of Figures
Because the test stimulus was identical for all condi-
3A and 3B.
tions, these MR decreases presumably reflect the effect
In both of the control conditions (where no jitter per-
of adaptation to dynamic random noise. Note that the
ception occurred), the MR signal did not increase during
control-dynamic condition never yielded a visual jitter
the test period (Figure 4, [3] and [4]). For example, MR
aftereffect (see Figure 1) after adaptation to dynamic
signals in the control-static condition showed a flat time
noise. Thus, subsequently observed static noise was as
course. Likewise, in the control-dynamic condition, MR
stable as in the adaptation-free visual world. However,
signals in retinotopic visual areas showed the expected
the brain activity during the control-dynamic condition
decrease in the test period following the increase in the
was not the same as during the control-static condition.
adaptation period: similar responses were previously
In the control-dynamic condition, there was a negative
observed in the retinotopic analysis. The behavior of
aftereffect in the MR signals.
MT⫹ was qualitatively similar to other areas in these
What happens in the brain during the test period (in
conditions jitter-disk and jitter-annulus) after dynamic
However, in both conditions jitter-disk and jitter-
random noise was switched to static noise, when jitter
annulus (where jitter perception occurred in the disk and
was actually perceived? In the jitter-disk condition, MR
annulus regions, respectively), the MR signals in MT⫹
decreases were observed in the annulus representation
increased abruptly at the beginning of the test period
during the test period (Figure 3B), whereas the MR signal
(Figure 4, [1] and [2]). V3A (which is also motion selective
increased modestly in the disk representation (Figure
[Tootell et al., 1997]), and V4v showed modest MR signal
3A) during the same period. Similarly, in the jitter-
increases as well. Other cortical areas showed only mi-
annulus condition, negative MR activity was observed
nor positive-negative profiles, as expected from the data
in the disk representation during the test period (Figure
shown in Figure 3. 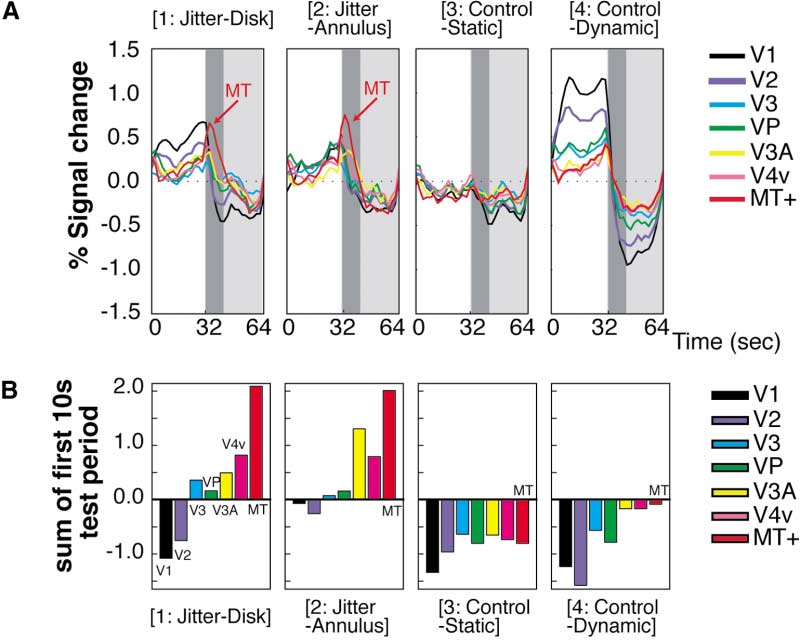 Nature's Aide® Vitamins Nature's Aide® Vitamins Takes the Ache Out of Flu Season Every year it seems the common cold and the current year's flu bring a little more misery than the year before—racking coughs, drips, sniffles, sinuses that feel as if they've been hit with a blowtorch, aches in places most of us didn't know could ache—you've been there. We all have.