THE JOURNAL OF BIOLOGICAL CHEMISTRY Vol. 279, No. 53, Issue of December 31, pp. 55833–55839, 2004 2004 by The American Society for Biochemistry and Molecular Biology, Inc.
Printed in U.S.A. Hyperphosphorylation and Aggregation of Tau in Experimental
Autoimmune Encephalomyelitis*
Received for publication, August 30, 2004, and in revised form, October 6, 2004 Published, JBC Papers in Press, October 19, 2004, DOI 10.1074/jbc.M409954200 Anja Schneider‡§¶, Gilda Wright Arau
´ jo‡¶, Katarina Trajkovic‡§, Martin M. Herrmann‡,
Doron Merkler储, Eva-Maria Mandelkow**, Robert Weissert‡¶,‡‡ and Mikael Simons‡§¶§§
From the ‡Department of Neurology, Hertie Institute for Clinical Brain Research, University of Tu ¨ bingen, Hoppe-Seyler- Str. 3, 72076 Tu ¨ bingen, Germany, the §Center for Biochemistry and Molecular Cell Biology, University of Go¨ttingen, Humboldtallee 23, 37075 Go¨ttingen, Germany, the **Max-Planck-Unit for Structural Molecular Biology, Notkestr. 85,22607 Hamburg, Germany, and the 储Department of Neuropathology, University of Go¨ttingen, Robert-Koch-Str. 40,37099 Go¨ttingen, Germany Axonal damage is a major morphological correlate
(1, 2). There is increasing evidence that axonal damage is the and cause of permanent neurological deficits in patients
major morphological correlate of permanent neurological defi- with multiple sclerosis (MS), a multifocal, inflammatory
cits in patients with MS (3, 4). Studies using magnetic reso- and demyelinating disease of the central nervous sys-
nance spectroscopy/imaging have suggested that neurodegen- tem. Hyperphosphorylation and pathological aggrega-
eration starts already at the onset of the disease (5).
tion of microtubule-associated protein tau is a common
Accordingly, neuropathological studies revealed significant ax- feature of many neurodegenerative diseases with ax-
onal injury in early disease stages (6 –9). The finding that onal degeneration including Alzheimer's disease. We
intralesional axonal damage is related to the degree of inflam- have therefore analyzed tau phosphorylation, solubility
mation in the lesions has led to the conclusion that inflamma- and distribution in the brainstem of rats with experi-
tion is not only responsible for demyelination but also for ax- mental autoimmune encephalomyelitis (EAE), an ani-
onal injury (10). Axonal degeneration in MS is defined by mal model of MS. Tau was hyperphosphorylated at sev-
characteristic morphological signs such as axonal swellings eral sites also phosphorylated in Alzheimer's disease
and spheroids (6 –9). Histopathological studies have shown and became partially detergent-insoluble in EAE brains.
Morphological examination demonstrated accumula-
that axonal damage in MS is associated with axonal accumu- tion of amorphous deposits of abnormally phosphoryl-
lation of amyloid precursor protein (APP), which is transported ated tau in the cell body and axons of neurons within
in a kinesin-dependent fashion, indicating impairment of ax- demyelinating plaques. Hyperphosphorylation of tau
onal transport (6). Because neurons are highly elongated cells, was accompanied by up-regulation of p25, an activator
their function depends on efficient transport of proteins and of cyclin-dependent kinase 5. Phosphorylation of tau,
organelles toward synapses. A disturbance in axonal transport activation of cdk5, and axonal pathology were signifi-
would therefore cause energy depletion at synapses, eventually cantly reduced when diseased rats were treated with
leading to complete transsection and degeneration of axons in prednisolone, a standard therapy of acute relapses in
MS. The underlying molecular mechanisms of transport im- MS. Hyperphosphorylation of tau was not observed in a
pairment and axonal degeneration in MS are so far elusive.
genetic or nutritional model of axonal degeneration or
Axonal degeneration is also found in neurodegenerative dis- demyelination, suggesting that inflammation as de-
eases (i.e. Alzheimer's disease, progressive supranuclear palsy, tected in the brains of rats with EAE is the specific
frontotemporal dementia linked to parkinsonism), which are trigger of tau pathology. In summary, our data provide
characterized by pathological hyperphosphorylation and as- evidence that axonal damage in EAE and possibly MS is
sembly of microtubule-associated protein tau into paired heli- linked to tau pathology.
cal filaments (11, 12). The physiological function of tau is tobind to and stabilize microtubules in a phosphorylation-de-pendent way (11). In addition, tau is involved in regulation of Multiple sclerosis (MS)1 is an inflammatory disease that anterograde axonal transport by influencing the attachment/ leads to the destruction of myelin in the central nervous system detachment rate of molecular motors along microtubules (13).
Pathological hyperphosphorylation of tau as seen in Alzhei-mer's disease causes detachment of tau from microtubules that * This work was supported by Deutsche Forschungsgemeinschaft might lead to microtubule breakdown and disruption of axonal Grants Si 746, SFB 523, and We 1947. The costs of publication of thisarticle were defrayed in part by the payment of page charges. This transport (loss of function). An imbalance of kinases and phos- article must therefore be hereby marked "advertisement" in accordance phatases has been proposed to contribute to the pathogenesis of with 18 U.S.C. Section 1734 solely to indicate this fact.
diseases with paired helical filaments (14). A common hypoth- ¶ These authors contributed equally to this work.
esis holds that tau hyperphosphorylation and subsequent de- ‡‡ To whom correspondence may be addressed: Dept. of Neurology, Hertie Institute for Clinical Brain Research, University of Tu tachment increases the pool of unbound tau beyond a critical Hoppe-Seyler-Str. 3, 72076 Tu ¨ bingen, Germany. Tel.: 49-7071-2982141; concentration, thereby initiating its aggregation into paired Fax: 49-7071-600137; E-mail: [email protected]
helical filaments (gain of toxic function) (11, 12, 15, 16).
§§ To whom correspondence may be addressed: Center for Biochem- istry and Molecular Cell Biology, University of Go¨ttingen, Humbold-allee 23, 37075 Go¨ttingen, Germany. Tel.: 49-551-3899533; Fax: 49-551-3899753; E-mail: [email protected]
MARK, microtubule-affinity regulating kinase; MAPK, mitogen-acti- 1 The abbreviations used are: MS, multiple sclerosis; APP, amyloid precursor protein; cdk5, cyclin-dependent kinase 5; EAE, experimental PP2A, protein phosphatase 2A; SP/TP motif, serin-proline/threonin- autoimmune encephalitis; GSK-3␤, glycogen synthase kinase 3␤; proline; CNP, 2⬘,3⬘-cyclic nucleotide 3⬘-phosphodiesterase.
This paper is available on line at http://www.jbc.org 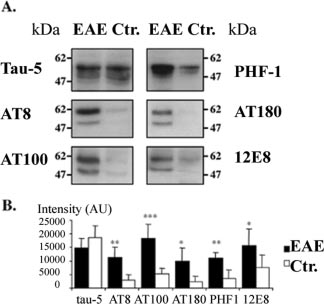 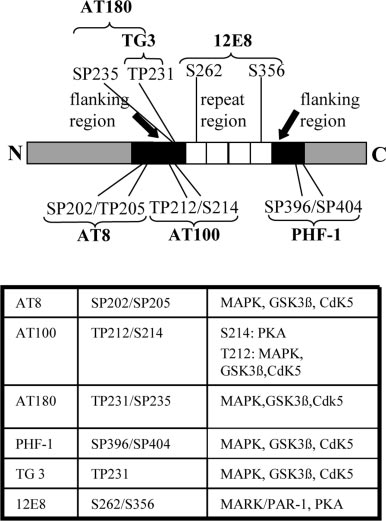 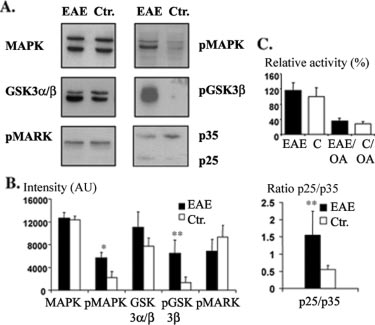 Tau Pathology in EAE Bar diagram of the longest tau isoform tau40 and its The repeat region (white bar) consists of 4 repetitive protein se- quences and is required for microtubule binding. Phosphorylation of itsKXGS motifs leads to detachment of tau from microtubules. In contrast,the phosphorylation of SP/TP motifs in the flanking regions (black bars)have only a modulatory effect on tau-microtubule binding. The tableshows phosphoepitopes of tau together with kinases, identified to phos-phorylate these sites in vivo and in vitro. FIG. 2. Analysis of kinase and phosphatase activation in rats
with EAE. A, Western blot analysis of brainstem lysates from EAE rats
and controls with antibodies against various tau-directed kinases (sam-
ples contained equal amounts of total protein). Note that p-MAPK and
p-MARK are directed against active kinase, whereas p-GSK-3␤ recog-
nizes the inactive enzyme. B, quantitative analysis of the expression
levels of total and activated kinases. Total expression levels of studied
kinases remained unchanged. We observed activation of MAPK, de-
creased activity of GSK-3␤, no significant change in MARK/Par-1 ac-
tivity, and increased p25/p35 ratio, indicating aberrant activation of
cdk5. Values are mean ⫾ S.D., n ⫽ 5 for each value. Two independent
experiments showed similar results (*, p ⬍ 0.05; **, p ⬍ 0.01). C,
phosphatase activities in brainstem homogenates of rats with and with-
out EAE were determined in duplicate samples using a colorimetric
assay in PP2A specific reaction buffer. PP2A activity is shown in % in
relation to a phosphate standard curve. The assay was also run in the
presence of the phosphatase inhibitor, okadaic acid (OA). The values
are mean ⫾ S.D., n ⫽ 5 for each value. Two independent experiments
showed similar results and no significant difference in phosphatase
activity between EAE and control animals.
phatase, PP2A, is not changed (Fig. 2C).
Hyperphosphorylated Tau and p25/p35 in Degenerating Neu- rons of Rats with EAE—Previous neuropathological studies Activation of MAPK and p25/cdk5 in EAE—To determine the have demonstrated axonal dilatations and spheroids in rats molecular mechanisms for increased tau phosphorylation, the with MOG-induced EAE as well as in human MS brains (6 –9).
activity of several known tau-directed protein kinases, includ- It has been shown recently that damaged axons and spheroids ing MAPK, GSK-3␤, cdk5, and MARK were studied (Fig. 2, A stain strongly positive with an antibody against APP (6).
and B). Immunoblot analysis using an anti-phospho MAPK Whereas physiological levels of axonal APP are not detected by (Erk1/2) antibody, which recognizes only the activated form of this method, APP accumulation is found in damaged axons MAPK, showed a ⬃2.5-fold increase in MAPK activity in EAE possibly because of failure of axonal transport (6). We detected brain lysates compared with that in adjuvant alone immunized prominent APP staining in dilated axons and spheroids on or naı¨ve rats. The overall expression levels of MAPK were not paraffin-embedded brainstems of LEW.1N rats with EAE (Fig.
changed. To assess the activity of cdk5, we determined the 3A). To analyze whether pathologically hyperphosphorylated levels of cdk5 activators, p35 and its proteolytic fragment p25.
tau was localized in neurons with axonal injury, we performed The proteolytic conversion of p35 to p25 has been implicated in immunohistochemical stainings with PHF-1, AT-8, and 12E8 aberrant cdk5 activation leading to tau hyperphosphorylation, antibodies. All three antibodies prominently stained axons in cytoskeleton disruption, and neuronal death (22–25). There EAE brains, particularly dilated and irregularly shaped axons was a striking increase in the p25/p35 ratio in EAE brainstems, and axonal spheroids (Fig. 3; and data not shown). In contrast, suggesting conversion of p35 to p25 in EAE. The activity of the only weak immunoreactivity of AT-8, PHF-1, and 12E8 was tau-directed kinase GSK-3␤ is negatively regulated by phos- observed in adjuvant-immunized control rats. We next evalu- phorylation at Ser-9. We found increased phosphorylation at ated the immunoreactivity with TG-3, an antibody that recog- Ser-9, whereas levels of total GSK-3␣/␤ remained unchanged, nizes phosphorylated tau (pT231) with abnormal conformation indicating that GSK-3␤ is not involved in the cascade leading to and detects early stages of paired helical filaments (29, 30).
tau hyperphosphorylation in EAE. Furthermore, we observed TG-3 displayed extensive staining of abnormal axons and sphe- that the activity of the non-proline-directed kinase, MARK, roids in rats with EAE, indicating a pathological conformation which phosphorylates Ser-262, was not altered in EAE.
shift of tau (Fig. 3). Similar results were observed when the In addition to kinase activation, inactivation of phosphatases conformation-dependent antibody MC-1 was used (data not can result in hyperphosphorylation of tau (26, 27). We therefore shown). In addition, an altered compartmentalization of tau determined the activity of the major tau-directed phosphatase, with accumulation of amorphous and granular tau deposits in PP2A, in duplicate samples by a colorimetric assay using a the soma of neurons within demyelinating plaques was de- phosphopeptide substrate in the PP2A-specific reaction buffer tected by PHF-1 and Bielschowsky stainings (Fig. 3B). Previ- (27, 28). The peptide was dephosphorylated to the same extent ous studies have shown that the TG-3, AT-8, and PHF-1 by homogenates obtained from rats with EAE compared with epitopes can be generated in vivo by cdk5 (31, 32). Because we controls, indicating that the activity of the tau-directed phos- found a conversion of p35 to p25, indicating an activation of 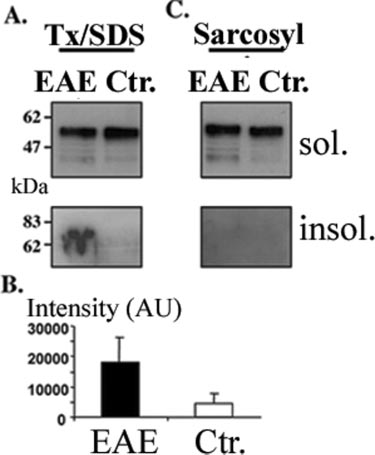 epidemiology Biostatistics and public Health - 2013, volume 10, number 2 SyStematic reviewS and meta- and pooled analySeS A systematic review of the cost-effectiveness of lifestyle modification as primary prevention intervention for diabetes mellitus type 2 Katrin I. Radl(1), Carolina Ianuale(2), Stefania Boccia(2) Background: diabetes is one of the leading causes of death, and has a huge economic impact on the burden of society. Lifestyle interventions such as diet, physical activity and weight reducing are proven to be effective in the prevention of diabetes. To encourage policy actions, data on the cost-effectiveness of such strategies of prevention programmes are needed. MeThods: a systematic review of the literature on the cost-effectiveness of prevention strategies focusing on lifestyle interventions for diabetes type 2 patients. a weighted version of drummond checklist was used to further assess the quality of the included studies. resuLTs: six studies met the inclusion criteria and were therefore considered in this paper. Intensive lifestyle intervention to prevent diabetes type 2 is cost-effective in comparison to other interventions. all studies were judged of medium-to-high quality.concLusIons: policy makers should consider the adoption of a prevention strategy focusing on intensive lifestyle changes because they are proven to be either cost-saving or cost-effective.