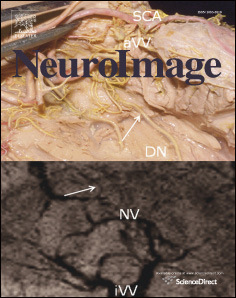 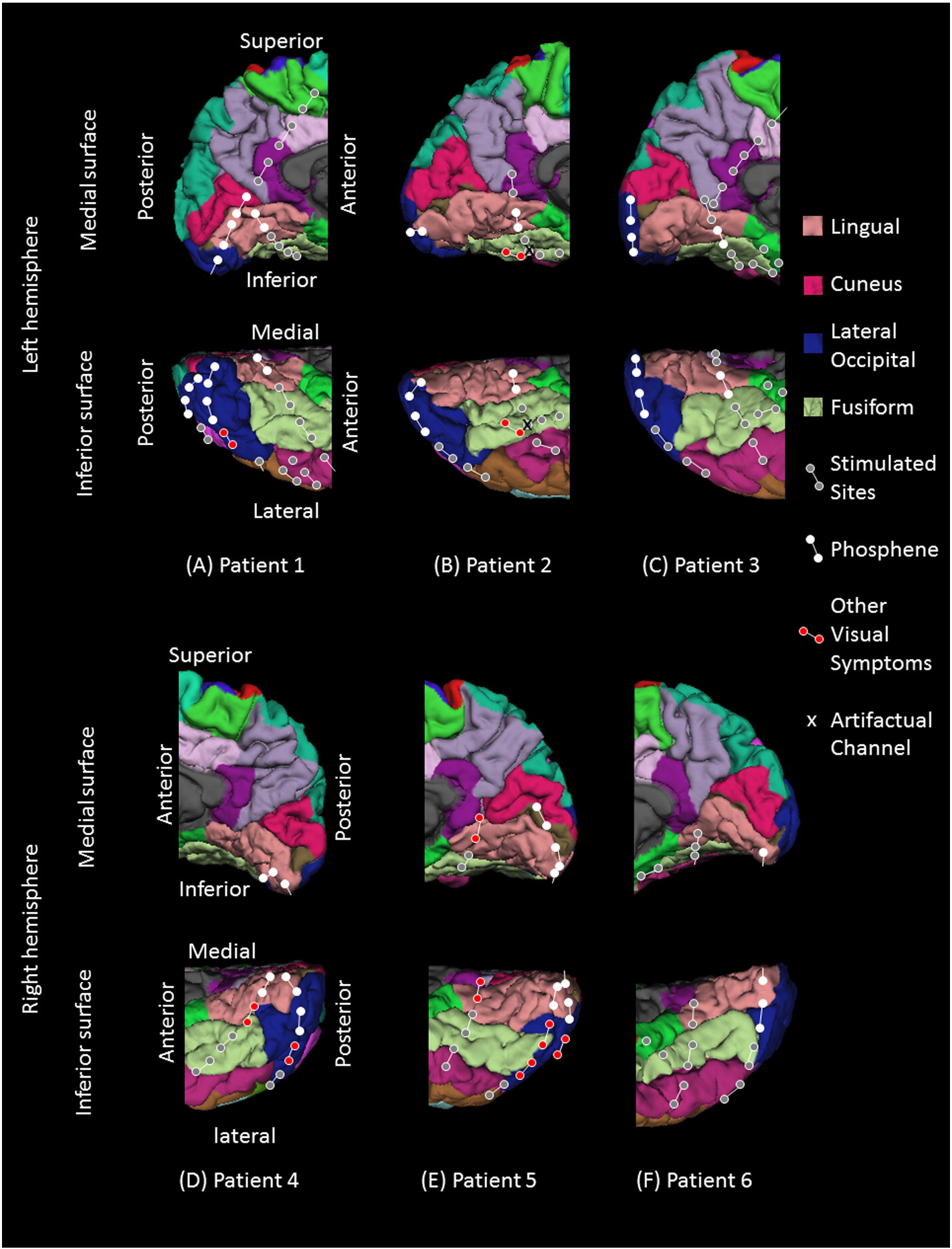 N. Matsuzaki et al. / NeuroImage 109 (2015) 249–259 Fig. 1. Location of subdural electrodes over the occipital–temporal regions. (A) Patient 1. (B) Patient 2. (C) Patient 3. (D) Patient 4. (E) Patient 5. (F) Patient 6. Cortical gyri were parcellatedand color coded using FreeSurfer software ). White circles: sites of which stimulation resulted in phosphene. Red circles: sites of which stimulation resulted in othervisual percepts ("Objects looking funny" in Patient 1; "Funny looking" in Patient 2; "Background felt moving" during stimulation of lateral occipital sites in Patient 4; "I saw somethingbut cannot tell what it is" during stimulation of a lingual–fusiform pair in Patient 4; "Something blurry and transparent but not anything" during stimulation of three pairs in thelateral-occipital regions and "something changes" during stimulation of lingual sites in Patient 5). Gray circles: sites of which stimulation resulted in no visual symptom. Circle withX: Electrode affected by artifacts (excluded from analysis).
dimly-lit room. Stimuli included a star-shaped drawing, upright faces, house stimuli were presented 40 times exclusively in the upright inverted faces, upright houses, a circular checkerboard reversal pattern, orientation. A black-and-white circular checkerboard reversal pattern and an annular checkerboard reversal pattern (). Stimuli were (radius: 9.6°) and an annular checkerboard reversal pattern (inner binocularly presented in grayscale on a black background at the center radius: 9.6°; outer radius: 23°), each presented with a pulse duration of the monitor. They appeared in a pseudorandom order for a duration of 133 ms and a train duration of 533 ms, were each presented four of 533 ms each, with an inter-stimulus interval ranging from 2.0 to times. In other words, a total of 16 pulses of circular and annular check- 2.5 s. The order of presentation of stimuli was counterbalanced across erboard stimuli were presented to each patient to localize the lower- image categories. Each patient was instructed to ﬁxate on the center order visual cortex for the central and peripheral ﬁelds, respectively.
of the screen (indicated by the ﬁxation cross of 1° height and widthduring the inter-stimulus interval), and to overtly say ‘star' only when Measurement of event-related gamma activity the target star-shaped drawing (size: 9 × 9°; color: white) was present-ed. No other action was required. Stimuli also included 40 faces and The general principle of our time-frequency analysis was previously 40 houses ). Each of the face and house stimuli was cropped into an oval-like shape (about 11° ). In short, we determined the spatial-temporal dynamics of width and 16° height). Face stimuli were presented 40 times in the high-gamma amplitudes at 80–150 Hz following the onset of image upright orientation and 40 times in the inverted orientation, whereas presentation, and we believe this is a reasonable summary measure of 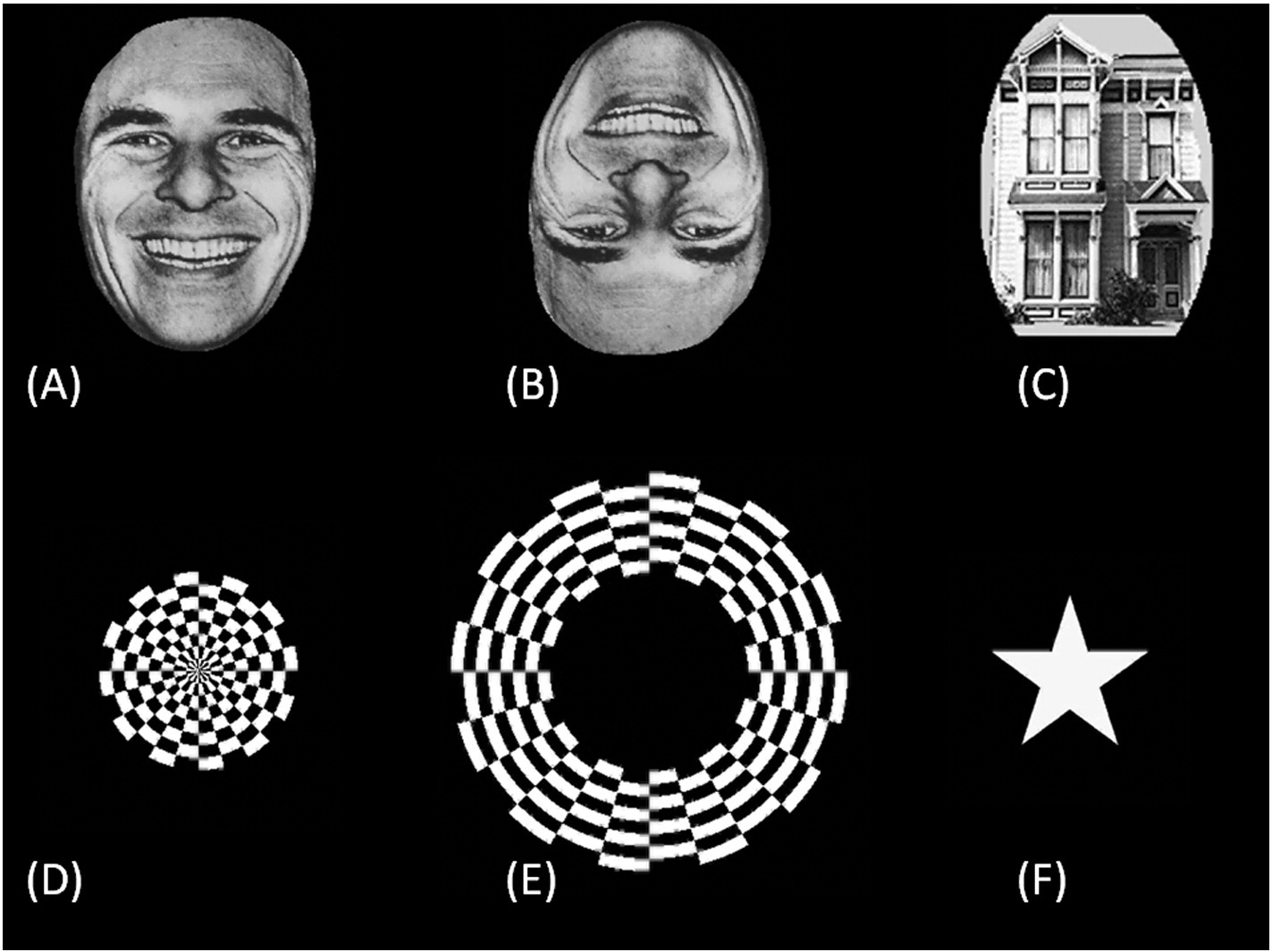 N. Matsuzaki et al. / NeuroImage 109 (2015) 249–259 Fig. 2. Examples of visual stimuli. (A) Upright face. (B) Inverted face. (C) House. (D) Circular checkerboard pattern. (E) Annular checkerboard pattern. (F) Star shape.
in-situ cortical activity. A study of macaque monkeys using single-unit upright and inverted face stimuli as well as between lower-order visual recordings suggested that task-related augmentation of high-gamma regions and other sites. We hypothesized that upright face-preferential activity was tightly correlated to an increased ﬁring rate ( high-gamma augmentation occurred at this time because a behavioral Our previous ECoG study of the effect of photic stimulation on study suggested preferential saccades toward an upright face occurred the occipital cortex revealed that the earliest and largest amplitude as early as 100 ms This analysis was done using a augmentation involved the 80–150 Hz frequency band ( linear mixed-model analysis, with ‘stimulus category' (e.g., upright vs ). The peak frequency of high-gamma modulations during inverted face), ‘phosphene' (presence or absence), and ‘interaction be- various forms of sensorimotor and cognitive tasks also involved this tween stimulus category and phosphene' as ﬁxed effects, and with ‘indi- frequency band ().
vidual electrodes' as a random effect. Subsequently, estimates of ﬁxed Each ECoG trial was transformed into the time–frequency domain effects were plotted from 10 until 300 ms in order to determine when up- using a complex demodulation technique ( right face-preferential high-gamma augmentation in the lower-order vi- incorporated in BESA® EEG V.5.1.8 software (BESA GmbH, Gräfelﬁng, sual cortex was maximized. The level of signiﬁcance was set at p = 0.05.
German; ). The time-frequency transform wasobtained by multiplication of the time-domain signal with a complex Relationship between high-gamma activities elicited by upright face and exponential, followed by a low-pass ﬁlter. The low-pass ﬁlter used checkerboard stimuli here was a ﬁnite impulse response ﬁlter of Gaussian shape, makingthe complex demodulation effectively equivalent to a Gabor transform.
We determined whether high-gamma augmentation for upright The ﬁlter had a full width at half maximum of 2 × 15.8 ms in the tempo- faces coincided with central- or peripheral-ﬁeld lower-order visual ral domain and 2 × 7.1 Hz in the frequency domain. The corresponding processing. The analysis was done using a linear mixed-model analysis time-frequency resolution was ±15.8 ms and ±7.1 Hz (deﬁned as the as described above. Fixed factors here included circular and annular 50% power drop of the ﬁnite impulse response ﬁlter). A given ECoG stimuli-related high-gamma augmentation (Based upon previ- signal was assigned an amplitude (a measure proportional to the square ous observations root of power) as a function of time and frequency at each trial. Time- we expected that central-ﬁeld checkerboard stimuli frequency transformation was performed for frequencies between 80 would elicit the largest gamma augmentation in sites proximal to the and 150 Hz and latencies between −800 and +1000 ms relative to occipital pole, whereas peripheral-ﬁeld stimuli would elicit the largest the image presentation, in steps of 5 Hz and 10 ms. At each time- augmentation in the medial occipital sites along the calcarine ﬁssure.
frequency bin, we analyzed the percent change in amplitude (averaged Thereby, we expected that upright face-preferential high-gamma across trials) relative to the mean amplitude in a reference period at augmentation would be more highly correlated with high-gamma −800 to −600 ms relative to the onset of image presentation. Such a augmentation induced by central than peripheral stimuli.
change in amplitude has been termed "temporal spectral evolution"(TSE) Statistical assessment of high-gamma activity preferentially elicited by Patient proﬁles upright face stimuli We studied six children with focal epilepsy (age range: 9–17 years; Using the statistical software incorporated in IBM SPSS Statistics 22 average age: 13.5 years; 3 females, ) who satisﬁed the inclusion (IBM Corp., Chicago, IL, USA), we subsequently determined whether and exclusion criteria described above. All six children were right- the percent change of high-gamma activity at 90 ms differed between handed and had normal or corrected-to-normal visual acuity. Across 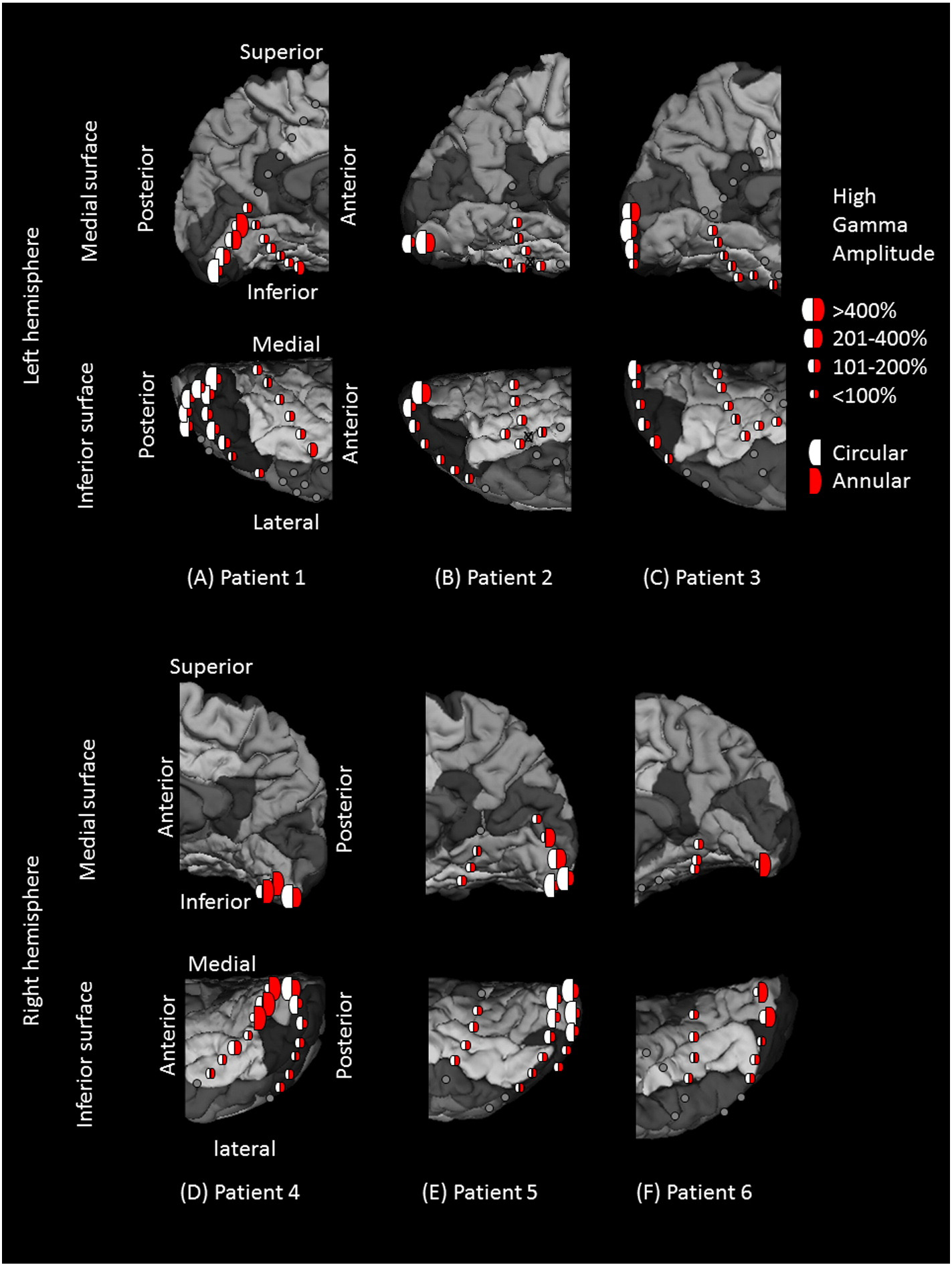 N. Matsuzaki et al. / NeuroImage 109 (2015) 249–259 Fig. 3. High-gamma augmentation elicited by checkerboard pattern stimuli. (A) Patient 1. (B) Patient 2. (C) Patient 3. (D) Patient 4. (E) Patient 5. (F) Patient 6. White and red semicirclesreﬂect the averaged percent change in high-gamma activity during circular (central) and annular (peripheral) checkerboard pattern stimulations, respectively. The degree of high-gammaaugmentation elicited by central-ﬁeld stimuli was larger in the region proximal to the occipital pole, while that by peripheral-ﬁeld stimuli was larger in the more anterior medial surface ofthe occipital lobe. Gray circles: electrode sites outside the regions of interest. Gray circle with X: Electrode affected by artifacts (excluded from analysis).
patients, a total of 28, 3, 36, and 26 electrodes, free of artifacts, were lo- Electrical stimulation data cated in the lingual gyrus, cuneus gyrus, lateral occipital region, and fu-siform gyrus posterior to the midbrain, respectively ). All of these Across patients, stimulation of 46 sites elicited phosphenes. These 93 electrodes were included for further analysis.
were classiﬁed as lower-order visual sites (21 in the lingual, 3 in thecuneus, 21 in the lateral-occipital, and 1 in the fusiform gyrus). The only fusiform site classiﬁed as a lower-order visual area was located Patient proﬁle.
very near to the lingual gyrus ). Visual assessment suggested that the lower-order visual sites deﬁned by electrical stimulation in the present study lay within Brodmann Areas 17 and 18 Stimulation of 15 sites elicited perception of some forms of visual dis- tortion (2 in the lingual, 0 in the cuneus, 8 in the lateral occipital, and 5 in the fusiform gyrus) (The percepts included: "Objects looking ", "Background felt moving", "I saw something but cannot tell what it is", and "Something blurry and transparent but not anything".
LCM: Lacosamide. LEV: Levetiracetam. LMG: Lamotrigine. OXC: Oxcarbazepine. PHT: The remaining 32 sites were not proven to be eloquent by electrical phenytoin. VPA: Valproic acid. ZNS: Zonisamide.
a Seizures were not captured, and a structural lesion in the left parietal lobe was removed.
stimulation (4 in the lingual, 0 in the cuneus, 7 in the lateral occipital, 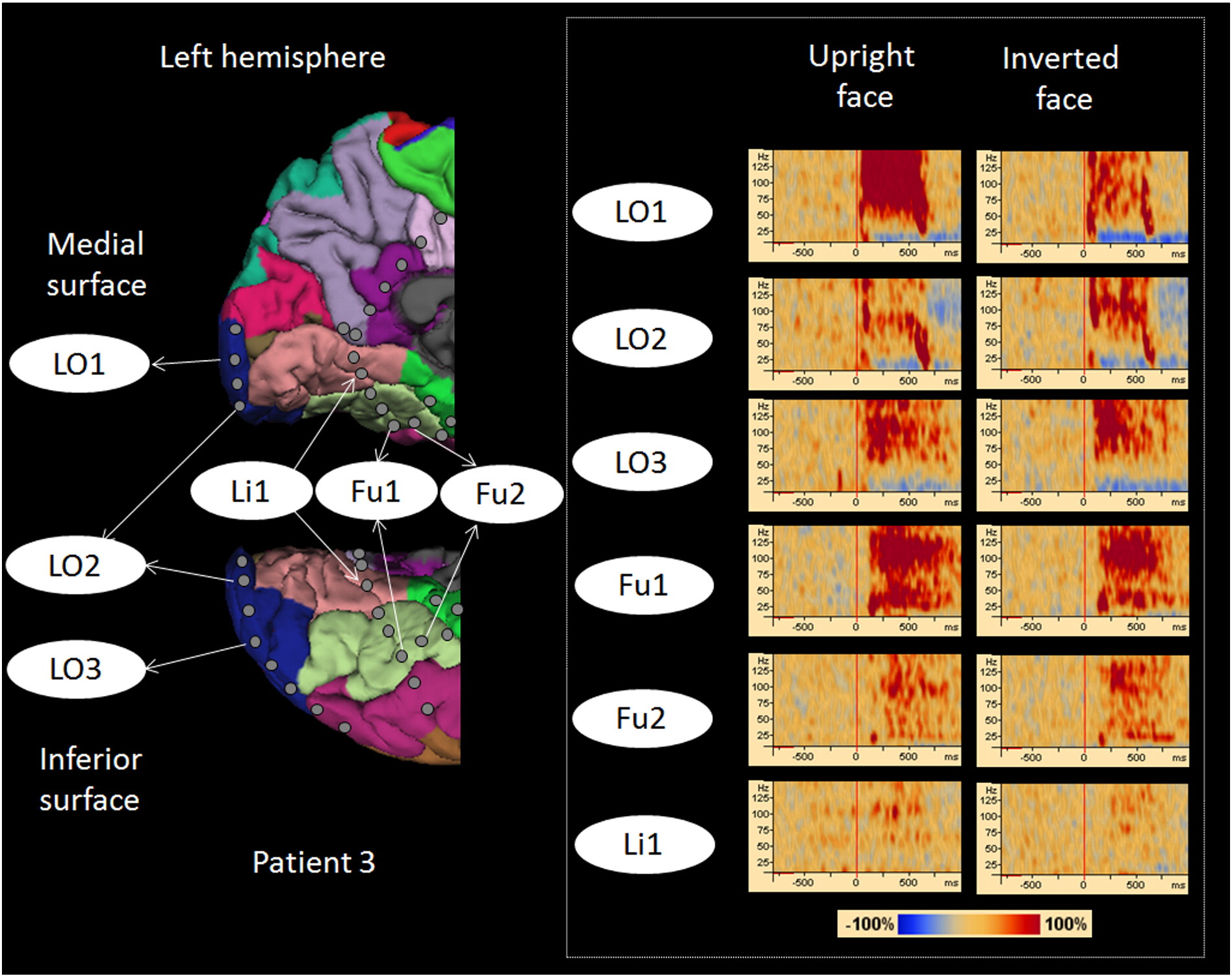 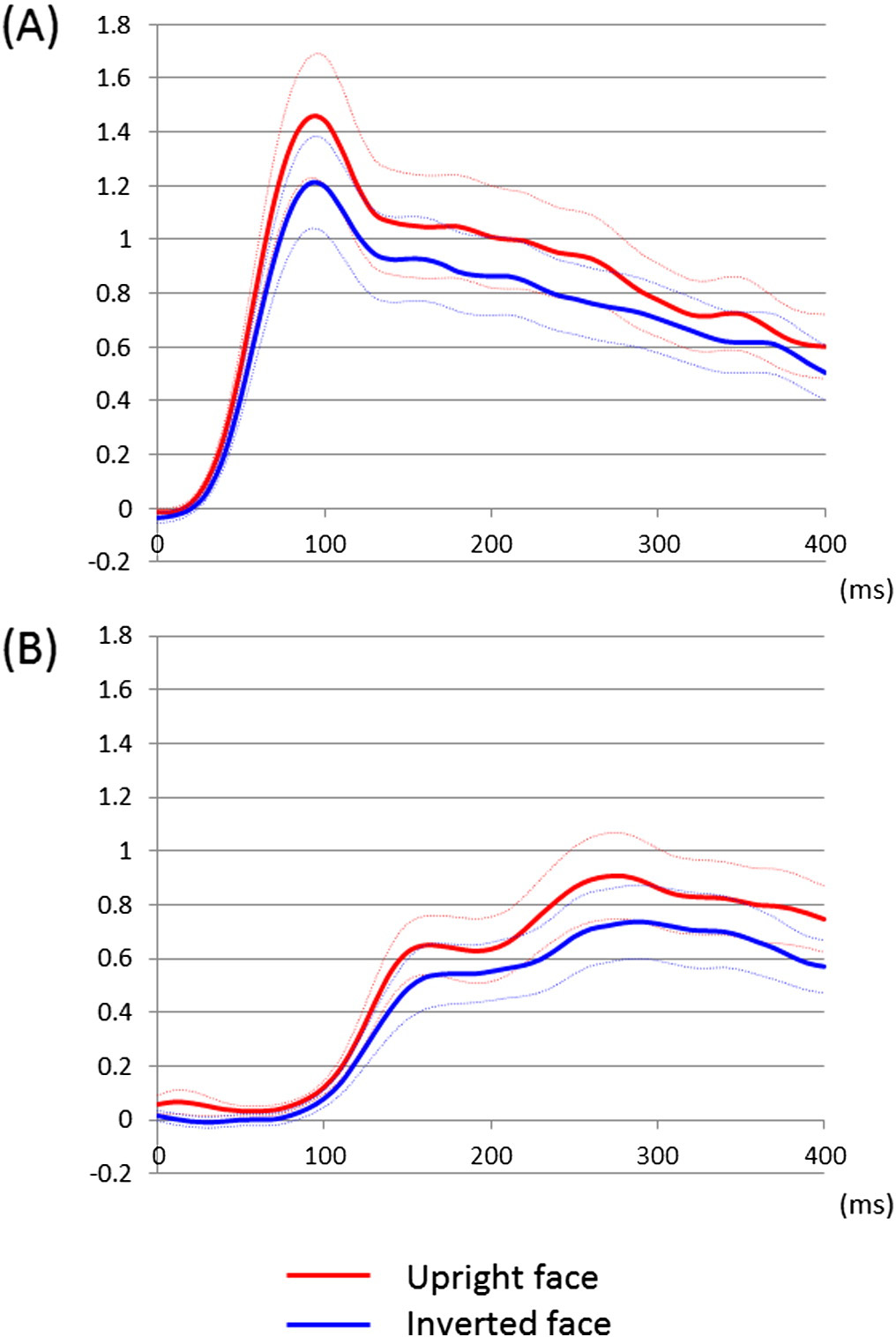 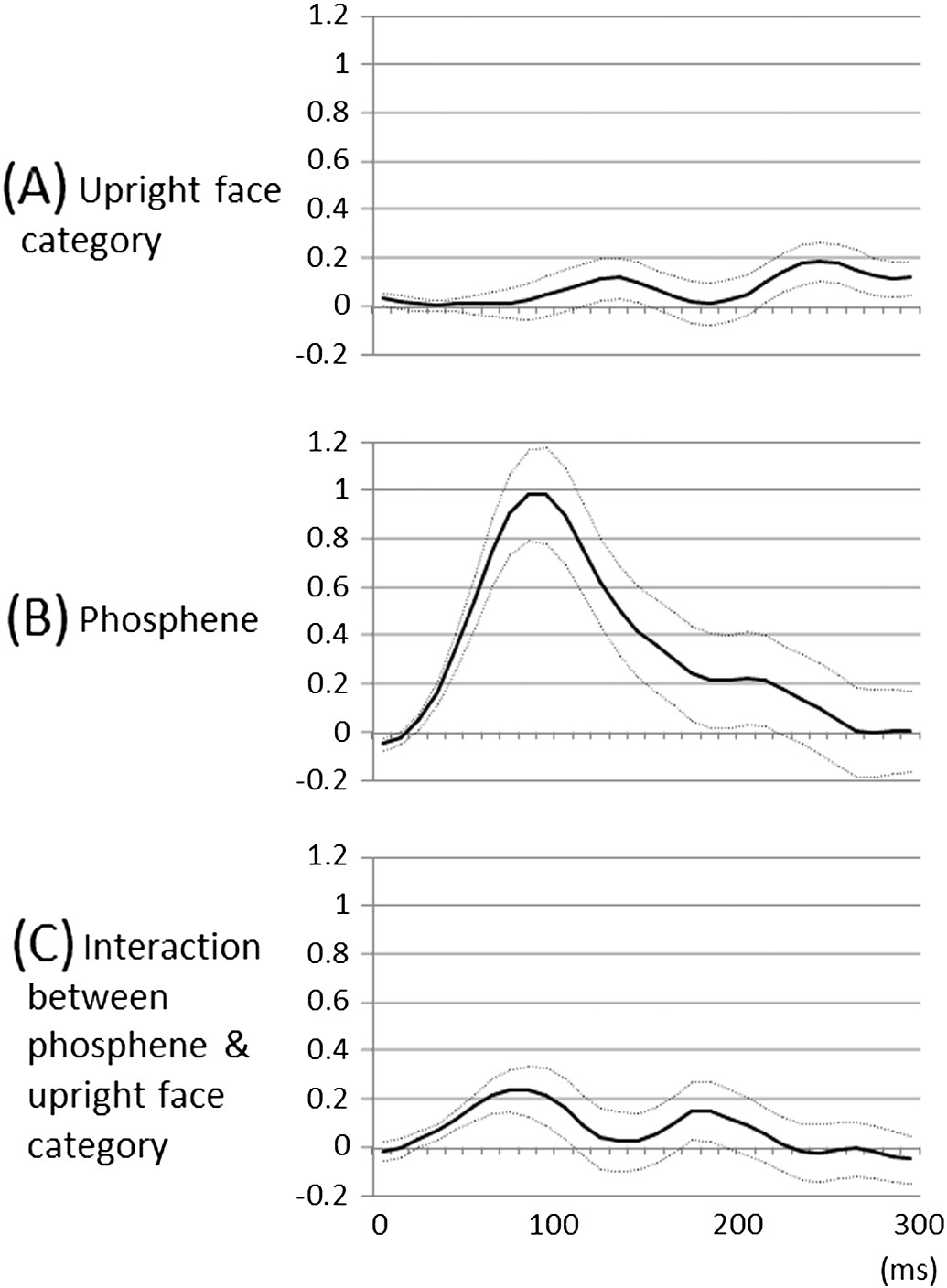