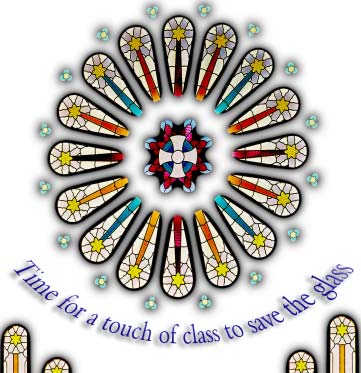 Sunday Eucharist
8am & 10am
Saturday Vigil 5pm
Monday 7.15am Cluny Convent
Tuesday 7am
Wednesday 9am
Thursday 7am
Friday 12.05pm
Saturday 8am
Adoration of
Blessed Sacrament
Friday 11am
Benediction
Friday 12 noon
Reconciliation
Friday 11.30am
Saturday 9.30am
Revelations
is produced for the friends and
parishioners of
St Michael's Parish
6 Beatrice Road
Auckland, New Zealand
Parish Office:
Telephone 09 520 1226
The parish and finance councils urge all parishioners to help save
Facsimile 09 520 1956 St Michael's stained glass windows.
Anna Friis reports
What can we do?
In This Issue:
Many parishioners will remember how much fun we had two years ago at the parish Saving stained glass P1,2,8 fundraising dinner/auction.We successfully raised enough money to paint the St Michael's parish house.
Mission accomplished This time it's the stained glass windows that give St Michael's Church much of its Feminist agenda reaches fruition P6 special character that require attention. Money needs to be raised for restoration work.
Family Mass calling young & old P6Link St Michael's Young Adults Heritage architect Dave Pearson says the windows are in sad need of repair and that at least $50,000 is required to pay for restoration work on the windows in most urgentneed.
He says a range of technical issues need to be addressed to ensure the ongoing strengthof the windows and, if these are not addressed properly, it could lead to their collapse 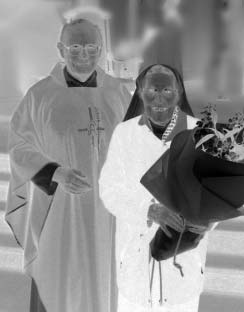 The rose windows in the transepts represent Hope andCharity. The rose window above the main entrance was St Michael's
intended to represent Faith, but was never finished.
Stained Glass Window Restoration
Six of the 15 mysteries of the Rosary are represented in the Gala Auction Evening
lower windows of the nave and transept. The Annunciationand Visitation are in the west transept; the Assumption of Friday 14 October 2005 7.00pm
Mary and the Crowning of Mary are in the east transept; Guineas Room 3rd Floor
and the Birth of Our Lord and Presentation of the ChildJesus in the Temple are in the west nave. The Risen Christ (speaking to Mary of Magdala "Go tell my brother") andThe Coming of the Holy Spirit at Pentecost are in the eastnave. These two windows were made in Auckland and were and ultimate loss.
given by Dr Frank Kearns in memory of his wife.
A fundraising team has been established to urgently set about raising the necessary money. Their first initiativeis a dinner/auction which will be held on Friday, St Michael's parishioners (and non-parishioners interested October 14, at the Ellerslie Event Centre, starting at in the preservation of Auckland's cultural and religious heritage) are encouraged to buy tickets to this event and tobid enthusiastically at the auction.
The fundraising team promises it will be a fun nightwith a sumptuous dinner, a dance band, and fabulous For ticket sales and all enquiries, please contact Pat de
auction items up for grabs, with prices expected to Zoete at the Parish Office (09 520-1226) or Tony Everitt
range from $200 to $20,000.
(021 780 721).
History of the windows
While St Michael's was officially opened on the 1st ofOctober 1933, the stained glass windows were notadded until the 1950's. As a temporary measure, plaintinted glass (amber double rolled cathedral glass tintnumber 929, to be precise) was installed for the open-ing.
The design, manufacture and installation of the stainedglass windows had to wait until the parish had raisedenough money. That process saw individual parishion-ers (including original architect George Tole) makingsubstantial donations to pay for specific windows.
Most of the windows were designed and made by HarryClarke Stained Glass in Dublin, Ireland, or CarlEdwards Studios of London, England, both very highlyregarded companies, producing high quality andexpensive work.
Extensive remedial work was done on the windows andtheir surrounds between 1980 and 1990. 15 years on,another round of work is required to preserve thesehistorical and valuable works of art.
What do the windows depict?
The Archangel St Michael (for whom the church isnamed) is featured high in the west transept, wearingchain mail armour and gold-plated leggings. St Georgeof the dragon-slaying fame stands beside him.
Cluny Sister Angela celebrated 65 years of Religious
Our Lady and St Columcille (also known as St Profession on 12 August 2005. Columba), occupy similar positions in the east transept.
Sister Angela has spent over 30 of those years in the Cluny The four windows in the apse (behind the altar, partly Convent in Victoria Ave, Remuera. obscured by the baldachino) depict the four evangelists: She is seen here with Monsignor Arahill after he presented
Matthew, Mark, Luke and John.
flowers to her at 10am Mass on a recent Sunday.

hundreds of red candles flickering in the night. At the centre of them was a large cross formed ofsome of these candles and at the foot of that over Parishoner Anthony Segedin, writing to friends from
Rome at the time of Pope Benedict's election, has kindly

three steps were the words "Papa - Ivana - Pavla II".
agreed to share his personal response with the wider It was truly beautiful.
parish community. I was at St. Peter's this morning, visited the ba-silica, attended Mass, saw the lunchtime blacksmoke and returned to my hotel for lunch andsiesta. Later, I then decided to return to experiencethe crowds and visit the tomb of John Paul II. Aftervisiting the tomb in the crypt, I was wandering aboutthe Square thinking that "this is not going tohappen today" and was about to leave when the smoke started from the Sistine Chapel. It wasinitially as black as, and I was about to leave to beat Right now, I am trying to come to terms with and the traffic (fat hope that was!) when the smoke understand the enormity of what I have experienced turned white and then the this afternoon and evening. It is incredibly moving for bells of St. Peter's me and, having just spoken a short while ago to my started: I was transfixed.
own dear bishop, I have had to sit down and wipe a Could this be? The large few tears away. It is at times like this that one bell and its two smaller misses being able to talk to a friend in person. It took "acolytes". I just watched some two hours for the realization to strike, but and even noticed the timing difference between the clash of steel and hearing of that beautiful deep Please ignore my earlier papal and conclave predic- sound. We had a new Pope and the crowds were wild How wrong can wrong be? At least at age 78, I think As if the crowds weren't already large, more people I can say that Ratzinger will not be around for 26 were pouring in, swelling the thousands already years (like his predecessor). I cannot truly say that I there. I thought that the Square was full, but there am excited at this choice. But I can say that I have was still more room and more room, and people kept complete confidence and faith in the workings of the arriving and being accommodated. That square is Holy Spirit. I pray for the new Holy Father with all my absolutely humungeous! Then the Italian military heart, for he faces an enormous task. I have just band arrived and played and the military services heard that the Holy Father is now celebrating Holy lined up in honour. The crowds were growing more Mass at St. Peter's, but as my hotel is half an hour's and more excited. It was an amazing feeling, a top quick walk from there, I am too late and too ex- hausted to attend. The buses here are regular but About fifty minutes after the white smoke, the great now very crowded, and the madness of Rome traffic doors in the centre of the facade and above the has assumned a new meaning right now. I regret Church opened and a that I shall not be attending this Mass.
cardinal appeared to I shall return home on Monday with two great memo- make the great and ries of this trip, dominated as it is by the death of joyous announcement John Paul (the Great), the conclave process and the "Habemus Papam", first election of the new Pope.
greeting us in severallanguages. I could hardly On the Monday evening after the death of the last believe that I was experi- Pope, I was walking down the Stradun, the major encing this. I listened street and a very old and beautiful street of carefully to him to Dubrovnik, one of great character and old buildings.
ensure that I caught the It must be seen and experienced to be believed.
new Pope's name, and At the end of the street is the church of the city's chosen name. I can say patron saint. Cascading down the stairs of the that I was disappointed church, situated at the end of the Stradun, were at the choice, but I

THE NEW ENGLAND JOURNAL OF MEDICINE Nevertheless, in addition to medical therapy, a varietyof endoscopic, radiologic, and surgical procedures have been used to relieve the mechanical obstruction of thebile ducts that the disease produces. The availability ofliver transplantation has also greatly improved pa-tients' prospects for long-term survival. PRIMARY SCLEROSING CHOLANGITIS