Proceeding of 6th ICGRC 2015
6-Gingerol from Zingiberaceae as a Result of Reverse Docking
for Prostate's Cancer Potential Drug Candidate
Haqqi Anajili Setyanto1, Arindra Trisna Widiansyah1, Zainul Mustofa1 1 Postgraduate of Educational Biology, State University of Malang, Malang, Indonesia Prostate cancer is a cancer that attacks the prostate gland causing the death rate which is high enough. One of the causes ofprostate cancer is the androgen receptor (AR) in the gland cells that initiates the formation of excess cell proliferation, thuscausing prostate cancer. AR inhibitor that is known is antiandrogen (biculatamide and enzalutamide). This study aimed to test the6-gingerol compound of ginger as an AR inhibitor drug candidate for prostate cancer using silico methode. The 3D structure ofthe 6-gingerol compound was taken from PubChem, the prediction of targeted protein used SwissTargetPrediction andPharmapper, analysis and docking 6-gingerol and antiandrogens with AR using Pyrx software, visualization compounds andprotein interactions using PyMOLsoftware. Visualization results shows that the interaction of 6-gingerol, biculatamide, andenzalutamide with AR have the same site. This proves that the 6-gingerol is potential as anAR inhibitor candidate.
Keywords: 6-gingerol; prostate's cancer; reverse docking The second most common cancer diagnosed in U.S. males, after nonmelanoma skin cancer, is prostate cancer.
Estimates are that, in 2000, 180 400 cases of prostate cancer were diagnosed in the United States and 31 900 mendied of the disease [1]. One of causing factor for prostate cancer is androgen receptor. The androgen receptor (AR)is required for prostate cancer growth in all stages, including the relapsed, androgen-independent tumors in thepresence of very low levels of androgens [2].The AR modulates the expression of genes involved in proliferationand differentiation. The AR belongs to the steroid receptor family of the nuclear receptor superfamily. This familyconsists of the glucocorticoid, estrogene, progesterone and mineralocorticoid receptors [3].
Prostate tumor cells appear to have several possible mechanisms by which they could become androgen refractory. First, mutations in the AR hormone-binding domain or amplification of the AR gene could increasetumor cell sensitivity to the very low levels of androgens that are produced by the adrenal glands. Second, mutationsof the AR could allow it to respond to other steroids or even to antiandrogens. Third, alterations of the interactionsbetween the AR and some of its coactivators could allow unmutated or mutated AR to become activated by adrenalandrogens, other steroids, or antiandrogens. Standard treatments relies on removing, or blocking the actions of,androgens[1].
Treatments such as androgen deprivation therapy (ADT), which typically includes suppression of testicular androgen by surgical castration or treatment with analogues of luteinizing hormone releasing hormone, are effectiveat slowing disease progression. In advanced disease, however, the cancer progresses despite low levels of circulatingandrogens that result from ADT [4]. The novel rationally designed AR signaling inhibitor (ARSI) enzalutamide(formerly MDV3100) is a phenylthiohydantoin derivative with kla sulfonamide side chain [5]. Enzalutamide has notonly been shown to potently inhibit the binding of androgens to the AR, but also inhibit nuclear translocation andsubsequent binding of the AR-ligand complex to DNA, thereby inhibiting transcription of AR target genes. Incontrast to antiandrogens (bicalutamide and enzalutamide) does not induce agonistic effects on AR signaling in cellsover-expressing wild type AR [6]. 6-gingerol compounds from Zingiberaceae alleged can be used as antiandrogensfor prostate cancer treatment.
Ginger is a natural dietary ingredient with antioxidant, anti-inflammatory, and anticarcinogenic properties [7].
Ginger contains several pungent constituents such as gingerols, shogaols, paradols, and gingerdiols [8]. Gingerolswere identified as the major active components in fresh ginger rhizome with 6-gingerol being the most abundantconstituent [9]. 6-gingerol inhibited cell proliferation, induced apoptosis, and G1 cell-cycle arrest in humancolorectal cancer cells [10]. As a drug candidate, various tests related to the degree of effectiveness are needed tothose compounds [11].
One of the parameters used in drug design is whether the drug candidate compound meets the Lipinski rule of five or not [12]. Lipinski's rule of five is a rule of thumb formulated by Christopher A. Lipinski in 1997, to evaluatethe "drug-likeness" of a chemical compound, and to allow a quick, reasonably-accurate determination as to whetheror not a molecule with interesting biactive is also likely to be an orrally available drug in humans [13]. Simply, itdefined several rules for identifying compounds with possible poor absorption and permeability [14]. This study aimto show 6-gingerol from Zingiberaceae as drug candidate for treatment in human prostat cancer. The result of thisstudy are expected to replace antiandrogens (bicalutamide and enzalutamide) with natural product fromZingiberaceae.
International Conference on Global Resource Conservation (ICGRC) 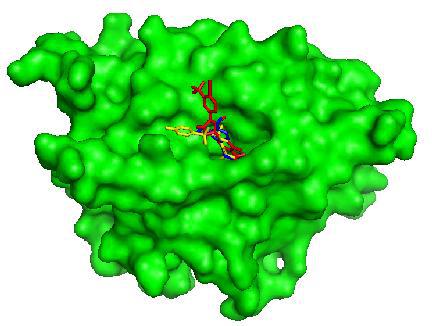 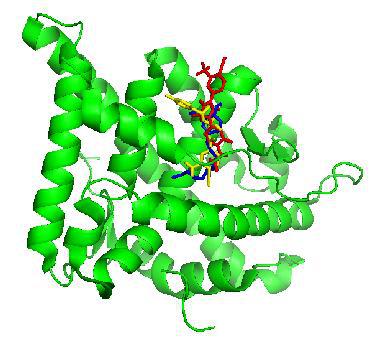