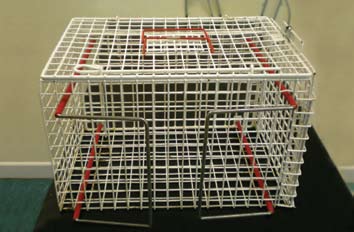 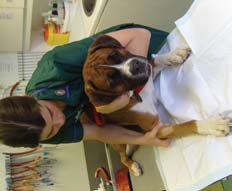 Figure 1.
Figure 2.
Photograph of a squeeze-back cage for use with feral cats.
Photograph showing a dog restrained for intravenous injection. The assistant stands to left of the dog, and A – Front door to the cage. Once lifted open the cat can be enticed to enter from a cat trap
her right thumb is used to raise the cephalic vein to B – The external 'arms' are moved towards the assistant and the rear wal of the cage pushes the cat
enable the operator to insert the needle. Her left arm flat against the facing wall in the squeeze-back mechanism.
restrains the dog under the chin.
intravenous injection of Pentobarbitone the fol owing equal to the volume of liquid to be withdrawn. Fill the are recommended: Cats: needle of 22–24 gauge and syringe with the correct dose, calculated according to length 0.75 inches (2cm), Dogs: needle of 18–22 the manufacturer's instructions for the animal's weight. gauge and length 1 inch (2.5 cm) is convenient for Remove the needle and syringe from the bottle and most size of dog.
replace the cap on the needle for safety. (b) Handling and restraint
If permanent plastic cannulae are available for use they are preferable as they minimise the risk that the needle Gently lift the animal on to the examination table. The may slip during the procedure resulting in some or all of dog should be facing the operator who wil be giving the drug not being delivered directly into the vein (see the intravenous injection. Large or fractious dogs may section 7e). The technique for inserting a plastic cannula require more than one handler for restraint. If the is similar to that for giving an intravenous injection, but operator is right handed, the assistant should stand may take a little more training and practice; insertion is on the animals left. Where possible the animal should especial y difficult in smal er dogs and cats.
be in the sitting or lying position. The assistants' arm passes over the back of the and the other arm holds the animal under the chin (Figure 2). Injection of Pentobarbitone, 20% solution is considered as ‘best practice'; however some euthanasia products have been combined with a local anaesthetic agent The cat should be gently placed onto the examination or Phenytoin. The pharmacological differences are table, facing the operator for intravenous injection. The inconsequential but such compounds may be more assistant should hold the cat against their body, making easily obtained in some countries.
the cat feel secure. Dose rate
The animal's head should be held under its chin with Where possible the animal should be weighed. If this one of the assistant's hands, while the other hand is not possible, experienced personnel may be able to raises the cephalic vein (Figure 3). The cat's foreleg estimate the animal's weight with sufficient accuracy. should be pushed forward at the elbow, and the thumb The dose of Pentobarbitone should be determined and forefinger used to apply gentle tourniquet pressure, according to the manufacturer's instructions.
as described for dogs in Figure 4.
7. Method
(c) Site of injection
(a) Filling the syringe
The cephalic vein in the animal's foreleg is the most A new, disposable needle should be attached to the convenient site for intravenous injection. When the nozzle of a new, disposable syringe, and then inserted animal is held correctly the cephalic vein is visible into the bottle containing Pentobarbitone for fil ing. on top of the foreleg (Figure 4). Once the animal has To prevent a vacuum forming in the bottle, resulting been suitably restrained, it may be necessary to aid in difficulty with subsequent withdrawal of fluid, it is visualisation of the vein, particularly in cats and small advisable first to inject into the bottle an amount of air dogs, to clip a smal amount of hair on the foreleg where the injection is to be given. 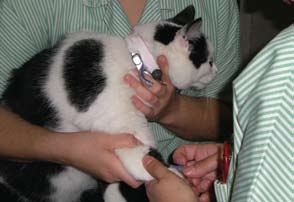 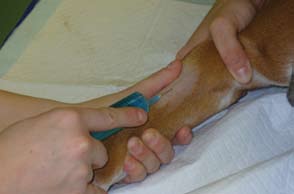 (d) Preparation for the injection
The assistant's thumb and forefinger of the left hand
is used to create a tourniquet effect at the ‘crook' of
the elbow and inflate or ‘raise' the cephalic vein. Mild
pressure is applied: using the thumb with a slight
outward rotation the cephalic vein becomes clearly
visible for injection (Figure 4).
(e) Starting the injection
The cap is removed from the needle and the point
of the needle is gently inserted through the skin up
and into the vein. The needle is then slid up the
vein, paral el to the skin surface. Before injection of
Pentobarbitone, it is essential to confirm that the
Figure 3.
needle is correctly positioned in the vein. In large dogs Typical restraint of a cat for intravenous injection. The cat is held close to the blood wil flow natural y back into the liquid within the assistant's body, the animal's head is held under the chin with one hand and the syringe. In smal dogs and cats it may be necessary assistant uses their other hand to raise the cephalic vein.
to draw the plunger of the syringe back slightly: if positioned correctly blood should flow back into the syringe verifying the needle is indeed in the vein. After the operator has confirmed that the needle is correctly positioned, the assistant releases their thumb pressure so that the intravenous injection can be given.
(f) Ensuring the injection has been delivered
The calculated dose of the agent is injected with care
ensuring that the needle remains in the vein and that injection into the surrounding tissues is not occurring. Injection outside of the vein is rare but possible, and causes swel ing around the vein. Should this occur the procedure should be stopped, the syringe and needle Figure 4.
removed and a new attempt made at a different position Insertion of an intravenous cannula into the cephalic vein. The operator is right on the vein or using the vein on the other foreleg. handed. The assistant stands to the side of the dog, and uses their thumb to raise Extravascular injection of Pentobarbitone may cause the cephalic vein, enabling the operator to insert the needle. pain and irritation to animals and every effort should be A – Shaved area exposing the cephalic vein
taken to ensure precise delivery into the animal's vein.
B – Raised cephalic vein is clearly visible
C – 'Crook' of the elbow
D – The assistant's thumb and forefinger create a tourniquet effect. The thumb is
Normal y dogs and cats will become unconscious rotated outward slightly to raise the vein before the end of the injection and death fol ows almost immediately with complete freedom from pain the saphenous vein is considerably less convenient to or distress when using the recommended dose and use than the cephalic vein, as it is highly mobile when with a confident but gentle approach. Death should pressure is applied making accurate injection difficult. be confirmed using the indicators stated on page 5. Ideal y operators should check for the absence of the The technique for raising the saphenous vein is similar heartbeat using a stethoscope, listening to the left side to that used when injecting into the cephalic vein, of the chest where the beat is most audible in life or but it is more awkward for the assistant to achieve by checking for a pulse, by palpation over the medial as the animal has to be placed on its side (in lateral aspect of the animal's hind limb. If there's any doubt recumbency) and the hind leg is lifted. The assistants operators should wait for rigor mortis to set in before thumb is placed on the outside of the animal's hock disposing of the animal's carcass.
joint, while the forefinger encircles the inside of the joint. Thumb pressure is applied with a slight outward (g) Other sites for intravenous injection
rotation to raise the vein for injection. This technique If injection via the cephalic vein is not possible, other requires additional skil , and should only be attempted sites may be used for intravenous injection, but they by experienced personnel. may be more difficult and require greater skil . 8. Additional resources
The saphenous vein can be accessed in either of the Humane Society of the United States, Humane hind legs. It is easier to locate in larger dogs than in Euthanasia by Injection: Training Video Series. cats and smal dogs. The vein runs down the inside Produced by the Humane Society University, of the hind leg from the animal's body, until it crosses to the outside of the leg above the hock, where it is easiest to reach for intravenous injection. However