Update on Aspirin and Plavix Sensitivity and
Resistance Testing:
David L McGlasson, MS, MLS(ASCP)CM,
59th Clinical Research Division,, Wilford Hall Medical
Center, Lackland AFB, TX, 78236-5300
This information is for education only and is not a product endorsement.
• Aspirin irreversibly acetylates platelet cyclooxygenase, preventing activation by blocking the prostaglandin pathway • The platelet inhibiting effect of a single aspirin may be detectable by platelet function assays within 24 hours • Failure to detect aspirin-induced platelet suppression may indicate physiological aspirin insensitivity, a phenomenon called "aspirin resistance" • Aspirin resistance is a recognized cause of failed aspirin therapy and may imply increased risk arterial thrombosis. Why is it important ?
• Aspirin is used for prevention of complications of vascular diseases
such as heart attack and strokes. Gender issues?

• However, studies have shown about 5-40% (about 1-2 million) of patients
taking Aspirin may not be receiving full benefit because of resistance

• Several studies have suggested a significant increase of major vascular
events associated with aspirin resistance. It may be reasonable to alter
therapy in the aspirin resistant population rather than continue to take a
drug that a test suggests is ineffective.
Mechanism of Action of ASA: Inhibits the
prostaglandin-producing enzyme cyclooxygenase which
converts arachidonic acid into prostaglandins.
ASPIRIN RESISTANCE
• ASA resistance refers to less than expected
suppression of thromboxane A2 production by ASA.
Reported to be independently associated with an
increased risk of adverse cardiovascular events.
• Clinical resistance: inability of ASA to protect
subjects from cardiovascular events such as an
acute MI.
• Laboratory ASA resistance: refers to the lack of
anticipated effect of ASA on a laboratory assay of
its antiplatelet effect.
POSSIBLE CAUSES OF ASPIRIN RESISTANCE
• Poor compliance by subjects.
• Drug interaction: ibuprofen, naproxen.
• Inadequate ASA dose.
• Increased turnover of platelets.
• Genetic polymorphisms of cyclo-oxygenase-1.
• Up regulation of alternate (non-platelet) pathways of
thromboxane production.
• No standardized approach to the diagnosis and
there are no proven effective treatments for aspirin
resistance that improve outcome. Yet!
Research Background
Eikelboom J et al: HOPE study: among patients with cardiovascular disease who
take aspirin with persistent high 11-dehydro-thromboxane B2, had a 3.5 fold
increase in the risk of death from heart attack

Gum P., Topol E, et al: A prospective, blinded determination of the natural
history of aspirin resistance among stable patients with cardiovascular disease
among patient with aspirin resistance, 24% experienced death, MI, or CVA
compared to 10% of patient who were not resistant

Faraday et al: Relation Between Atherosclerosis Risk Factor and Aspirin
Resistance in a Primary Prevention Population found that higher 11-DHT B2
levels is the only criteria associated with atherosclerosis risk factors suggesting
that this measurement may represent the most relevant approach for identifying
asymptomatic subjects who ASA treatment fail.

Research Background
Patrono et al: Low-Dose Aspirin for the Prevention of Atherthrombosis:
Benenfits fine for high risk subjects but may be marginal in low risk populations.

Rjdker PM et al: Women‟s Health study in healthy women gave surprising
results in that protection from stoke by 17% over men but no reduction in the
risk of MI. Reverse effect for men in protection from MI but low protection from
Becker DM et al: Women experienced the same or greater decrease in platelet
reactivity after ASA therapy, retaining modestly more platelet reactivity
compared with men.

Bhatt DK et al: Overall clopidogrel + ASA was not significantly more effective
than ASA alone in reducing MI, stroke and CVA.
Lordkipanidze M et al: Aspirin resistance: Truth or dare. ASA resistance is
poorly understood with testing not equivalent to each other. Like LA testing?
Research Background
Goodman T, Sharma P, Ferro A. The genetics of aspirin resistance: ASA may
not be effective in the prevention of thrombosis, depending on genetic makeup.
Genetic testing is not currently useful for predicting the effect of ASA clinically.

• Assays that measure platelet response to aspirin may predict clinical outcomes • We compared four methods for monitoring 24-hour platelet inhibition (single dose) and a 7 day dosing regimen in healthy subjects by 81 mg and 325 mg (standard child and adult) • We anticipated these assays will reveal a greater anti-platelet effect of 325 mg compared to 81 mg of aspirin • We further anticipated the assays were comparable in their ability to detect aspirin effect • We further anticipated that the 7-day dosing regimen would reveal a greater anti-platelet effect compared to the 24-hour Research Objectives
• To measure platelet response to aspirin using four commercially available assays to determine: 1) Whether results of these assays compare and validate each other 2) Whether the degree of platelet inhibition under different single doses of Aspirin (81 and 325mg) Four commercially available assays were used in this study
• Whole blood aggregometry: examines platelet aggregation by using
platelet agonists Collagen, ADP, Arachidonic Acid.

• Aspirin-works: Measure level of urine 11-Dehydrothromboxane
(metabolite of Thromboxane A2) in pg/mg of creatinine.
• If these platelet function assays are found to be comparable, we may be able to choose the most time efficient, cost-effective approach to obtain this information. • Data obtained can be used to distinguish aspirin resistant and aspirin sensitive individuals. • If aspirin resistance is associated with increased risk of recurrent stroke, CVA, MI etc., then using platelet function assays could detect such individuals (who could then be offered other anti-thrombotic Plan for Data Analysis
• Whole blood platelet aggregation (WBPA) using Chronolog- 570Vs aggregometer was the gold standard test • The other 3 assays results were compared to WBPA to validate equivalency Chronolog WBA®
• Records whole blood platelet activation by platelet aggregation impedance • Whole blood platelet aggregation is the reference method for aspirin detection • 10 uL of aggregation agonists 1.0 µg/mL collagen (Coll) and 0.5 mM arachidonic acid (AA) were added to 1:1 saline/whole blood suspensions • Aggregation impedance  8 ohms indicates aspirin 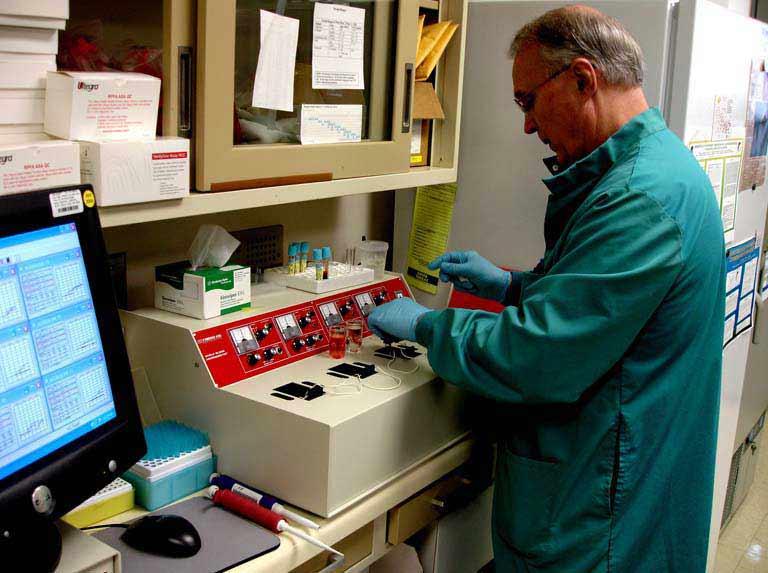 PLATELET AGGREGATION
Platelet rich plasma
(light transmission
aggregometry) LTA
–Measures change in light
transmission upon
addition of agonist
–Considered by some the
gold standard
–Labor intensive, not
specific
–Sensitivity variable
–Correlates with clinical
events
WHOLE BLOOD AGGREGATION
 Measures impedance: Superior to PRP?  Evaluates platelets in a physiologic milieu in the presence of RBC and WBC which are know to modulate platelet function.  Faster and uses less specimen making it better for children and hard to draw subjects.  Higher sensitivity to medication responses.  Does not require centrifugation thus avoiding injury to platelets and loss of giant platelets. 1. Whole blood
sample is
diluted with
0.9 % saline,
1:1 in cuvette
2. Electrode is
placed in
sample
Methods 3. Platelets form a
monolayer on the
electrode
4. Voltage is run
through the
electrode and
resistance baseline
is assigned a value
of zero ohms
5. Agonist is added
to stimulate
aggregation
Amount of
aggregation is
directly
proportional to
the change in
resistance in ohms 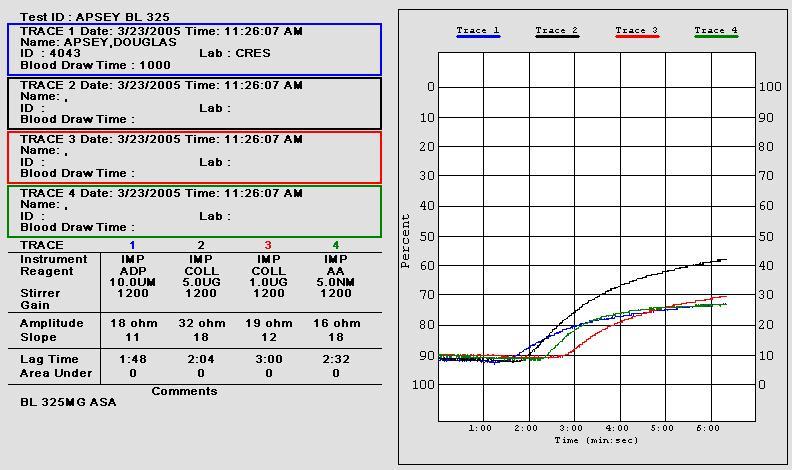 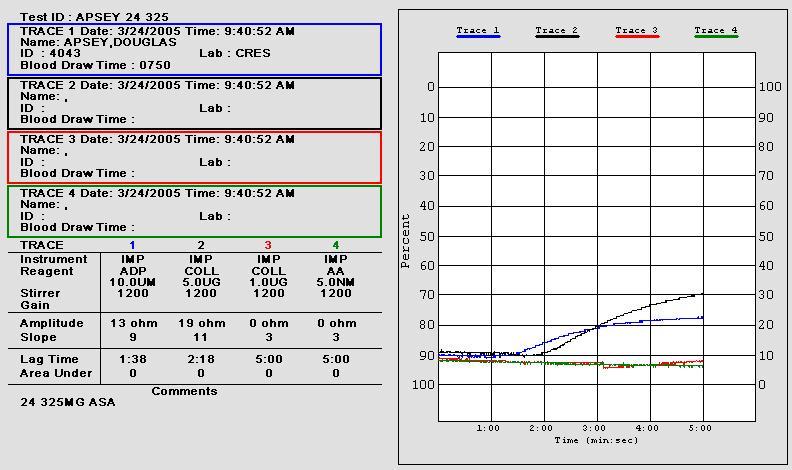 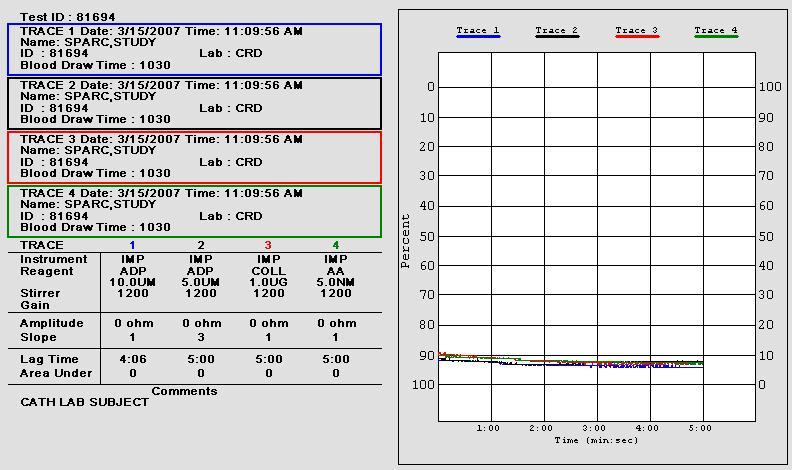 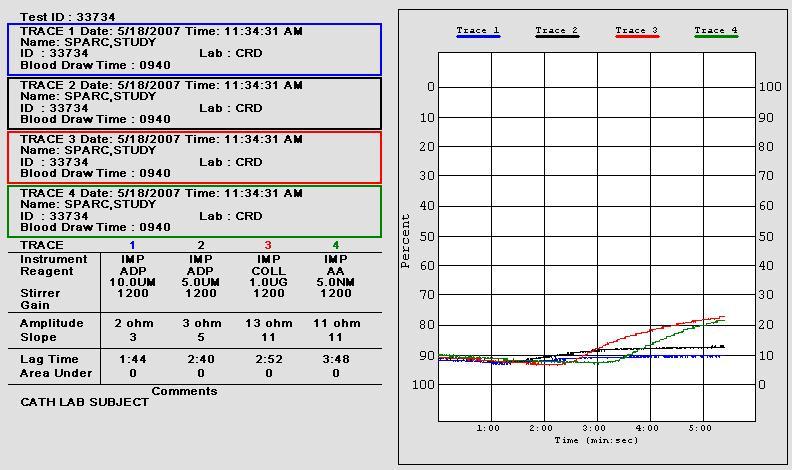 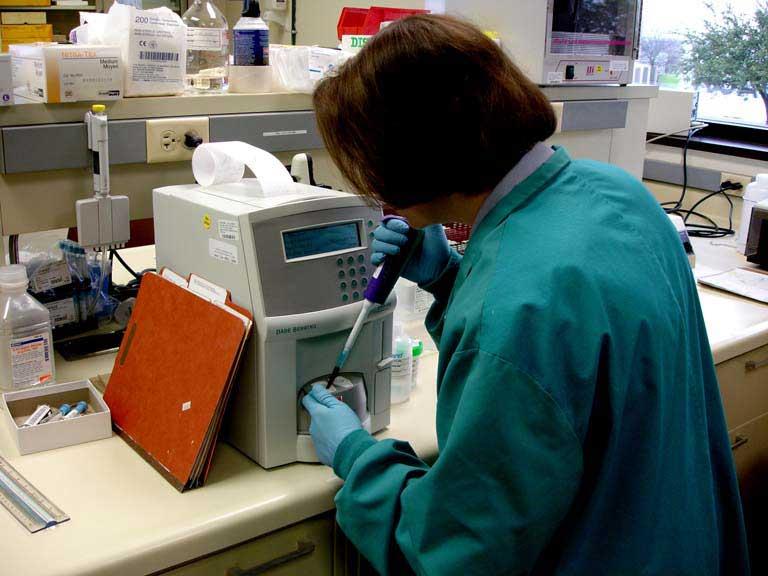 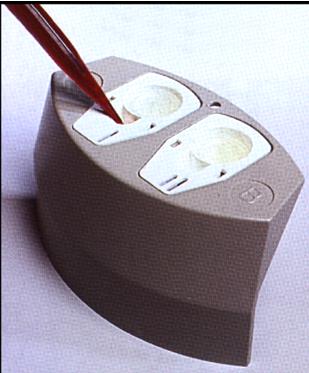 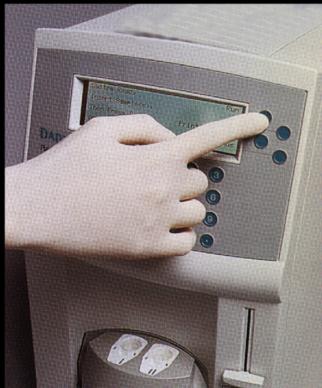 • Out of 38 individuals whose WBPA showed no significant
changes at 81 mg, 31 of those individual become
responders at 325 mg.

• Initial responders may develop aspirin tolerance according
to some studies when taking aspirin chronically.

Elevated fibrinogen and vonWillebrand‟s factor
Type II Diabetics do not respond as well to ASA
Cigarette smoking and hypercholesterolemia
Platelet inhibition may not be constant over an extended time with a fixed dose
of Aspirin
Aspirin resistance in the single dose study may be higher because of one time
dose effect. Percent of aspirin resistance may be reduced if given aspirin on
daily basis.
Some people might show biochemical platelet inhibition at baseline without
administration of antiplatelet drugs.

Clinical Implications
• For individuals who do not respond to 81mg ASA when tested by these
methods, titrating up aspirin dose may be needed to achieve sufficient
platelet inhibition over several days and retest

• For those who are aspirin non-responders when testing by these
methods with 325 mg aspirin (including urine 11-dehdyrothromboxane),
alternate anti-platelet therapy may be indicated
• Initial responders may develop aspirin tolerance according to some
studies when taking aspirin chronically.

• There are needs for randomized double blind studies to show that by
giving alternate anti-platelet therapy in patients with a history of vascular
events on ASA and shown to be biochemically ASA resistant, the risk of
further events is decreased when compared to those individuals
continued with aspirin

– Because of the complexity of the platelet activation process, one
single test is unlikely to adequately reflect all aspects of platelet
function that are relevant to clinical events

Interuniversity Progress Test for Medicine All rights reserved. All rights to intellectual ownership of the contents of the interuniver-sity progress test and the item bank are with the Medical Faculties of the universities of Amsterdam, Maastricht, Nijmegen, Groningen and Leiden. The use of progress test questions by a party for other purposes than the joint composition of the progress test is only allowed with the prior written permission of the Interuniversity Progress Test Com-