Postgrad Med J 2007;83:469–472. doi: 10.1136/pgmj.2006.055913 The diagnostic approach to ureteric colic has changed due to ultrasound, intravenous urography and computed the introduction of new radiological imaging such as non- contrast CT. The role of intravenous urography, which is Plain radiograph of the kidney, ureter and regarded as the gold standard for the diagnosis of ureteric colic, is being challenged by CT, which has become the first-line A plain radiograph of the kidney, ureter and bladder (KUB) has a sensitivity that ranges from investigation in a number of centres. The management of 45–60% in the evaluation of acute flank pain.2 ureteric colic has also changed. The role of medical treatment Overlaying bowel gas or stool (faecoliths) and has expanded beyond symptomatic control to attempt to target abdominal or pelvic calcifications (phleboliths) can make identification of ureteric stones difficult. In some of the factors in stone retention and thereby improve the addition, a KUB cannot visualise radiolucent likelihood of spontaneous stone expulsion.
stones (10–20% of stones), thus limiting the value of plain radiography. However, a KUB may sufficefor assessing the size, shape, and location ofurinary calculi in some patients (fig 1).
Ureteric colic is an important and frequent emergency in medical practice. It is most commonly caused by the obstruction of the Ultrasonography allows direct demonstration of urinary tract by calculi. Between 5–12% of the urinary stones located at the PUJ, the VUJ, and in population will have a urinary tract stone during the renal pelvis or calyces.3 Stones located between their lifetime, and recurrence rates approach 50%.1 the PUJ and VUJ, however, are extremely difficultto visualise with ultrasonography.
CLINICAL PRESENTATIONThe classic presentation of a ureteric colic is acute, Intravenous urography colicky flank pain radiating to the groin. The pain Since it was first performed in 1923, intravenous is often described as the worst pain the patient has urography (IVU) has been the traditional ‘‘gold ever had experienced. Ureteric colic occurs as a standard'' in the evaluation in ureteric colic. It result of obstruction of the urinary tract by calculi provides structural and functional information, at the narrowest anatomical areas of the ureter: including site, degree and nature of obstruction.
the pelviureteric junction (PUJ), near the pelvic Whereas IVU has a detection rate as high as 70– brim at the crossing of the iliac vessels and the 90% (fig 2),4 it can only visualise radiopaque narrowest area, the vesicoureteric junction (VUJ).
stones (80–90% of stones). Despite its usefulness, Location of pain may be related but is not an there are some undesirable aspects of IVU, includ- accurate prediction of the position of the stone ing radiation exposure, risk of nephrotoxicity, within the urinary tract. As the stone approaches contrast reaction and the time it takes, particularly the vesicoureteric junction, symptoms of bladder when delayed films are required.
irritability may occur.
Calcium stones (calcium oxalate, calcium phos- The reported incidence of contrast-induced renal phate and mixed calcium oxalate and phosphate) failure is approximately 1%,5 while in the popula- are the most common type of stone, while up to tion with pre-existing renal failure and diabetes 20% of cases present with uric acid, cystine and mellitus, the risk of contrast-induced nephrotoxi- struvite stones.
Physical examination typically shows a patient Metformin is an oral agent, used in the manage- who is often writhing in distress and pacing about ment of diabetes mellitus. Metformin is excreted trying to find a comfortable position; this is, in unmetabolised by the kidney. It is not nephrotoxic; contrast to a patient with peritoneal irritation who See end of article for however, a major concern is the potential hazard authors' affiliations of metformin-induced lactic acidosis in those who Tenderness of the costovertebral angle or lower develop contrast-induced oliguria. In this setting, quadrant may be present. Gross or microscopic Correspondence to: metformin can accumulate, resulting in the sub- haematuria occurs in approximately 90% of Dr M Masarani, 18 St sequent accumulation of lactic acid. Metformin- Peter's Way, London W5 patients; however, the absence of haematuria does induced lactic acidosis is fatal in half of the 2QR, UK; [email protected] not preclude the presence of stones.
Abbreviations: CT, computed tomography; IVU, intravenous urography; KUB, plain radiograph of the Besides routine history and clinical examination, kidney, ureter and bladder; MET, medical expulsive Accepted 25 January 2007 investigations of patients with suspected ureteric therapy; NSAIDs, non-steroidal anti-inflammatory drugs; PUJ, pelviureteric junction; VUJ, vesicoureteric junction 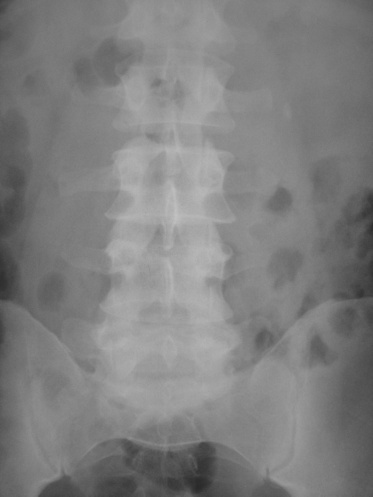 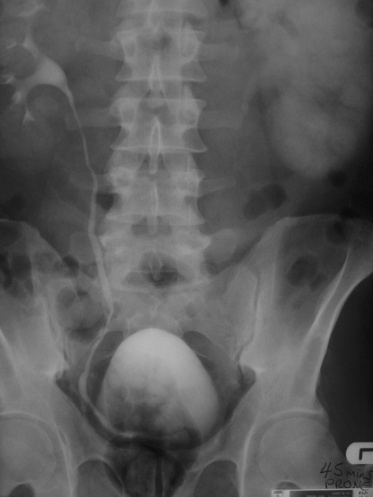 Masarani, Dinneen Figure 1 Patient presented with left loin pain. Kidney, ureter and bladder Figure 2 Patient after administration of intravenous contrast medium, (KUB) x ray showing 7 mm radiopaque stone laying lateral to the tip of showing left nephrogram and contrast coming down to the level of the transverse process of L2.
affected patients; however, it is a very rare complication.7 incidence of extra-urinary abnormality with CT is 6–12%.11 In patients with normal renal function metformin should be Those reported abnormalities include pelvic inflammatory discontinued at the time of the IVU and withheld for the disease, adnexal masses, tubo-ovarian abscess, appendicitis, subsequent 48 h. For patients with abnormal renal function, diverticulitis, cholecystitis, pancreatitis or unexpected malig- metformin should similarly be discontinued at the time of the nancy. In some cases, intravenous contrast medium will be IVU and only be reinstated when renal function has been re- necessary for further characterisation of any of the unexpected evaluated and found to be normal.8 Contrast reaction Disadvantages of CT In the general population the incidence of contrast reaction is An important limitation of CT is the fact that it does not permit 5–10%, including mild reactions such as vomiting and urticaria, functional evaluation of the kidneys and it is unable to assess as well as more serious reactions such as bronchospasm and the degree of obstruction. The presence of a stone does not anaphylaxis (the risk of anaphylaxis is 157 per 100 000).9 The necessarily mean that the kidney is obstructed. The relative lack incidence of contrast reaction can be diminished in many cases of functional information derived from CT, compared with the with the use of expensive low osmolar contrast agents but it renal excretory times evident during IVU, might compromise cannot be entirely eliminated.
clinical management. However, some authors have suggestedthat secondary features of obstruction on CT which include Non-contrast enhanced computed tomography hydronephrosis, hydroureter, renal enlargement and inflam- Unenhanced computed tomography (CT) provides an increas- matory changes of the perirenal fat, that are referred to as ingly popular alternative for evaluating ureteric colic.
perinephric stranding, are a reliable parallel of delayedexcretion on IVU.12 Another major disadvantage of CT is the higher radiation CT has the following advantages over IVU: it has higher exposure of the patient compared with KUB or IVU. CT in this sensitivity and specificity for calculus detection, it does not use setting requires at least three times the radiation exposure of intravenous contrast medium, it permits alternative diagnoses, IVU and 10 times that of abdominal radiography and presents and requires a shorter examination time.
an additional lifetime risk of malignancy of 1 in 4000.13 Newer The accuracy of non-contrast CT in detecting stone disease protocols involving reduced radiation exposure without com- has been indisputable with sensitivity, specificity and positive promising efficacy are developing and are likely to reduce predictive value of CT being reported as 96%, 100% and 100%, further the radiation exposure from CT (table 1). Low-dose and respectively.10 CT can visualise all radiopaque stones, as well as ultra low-dose CT reduced radiation exposure by about 50% and radiolucent stones such as uric acid and cystine calculi (fig 3).
95%, respectively, compared with standard-dose CT, with When CT confirms the presence of a stone, a plain abdominal comparable detection rates of calculi and non-stone-associated radiograph should be obtained to assess whether the stone is abnormalities (table 2).14 15 radiopaque. This is helpful as only the KUB radiograph is Another disadvantage is that CT services are not universally needed later to determine if the stone has moved or passed.
available for 24 h period and a radiologist may be required for Avoiding the use of intravenous contrast medium is perhaps the accurate interpretation of the films.
the most distinct benefit of CT in this situation.
Finally, in the current healthcare climate, cost and avail- CT also provides an opportunity to identify extra-urinary ability will always be central factors determining the use of CT pathology during the primary investigation of patients in whom in the acute setting. A frequent criticism of CT is that it costs a definitive diagnosis is not always apparent. The reported more than IVU. However, when taking into account the 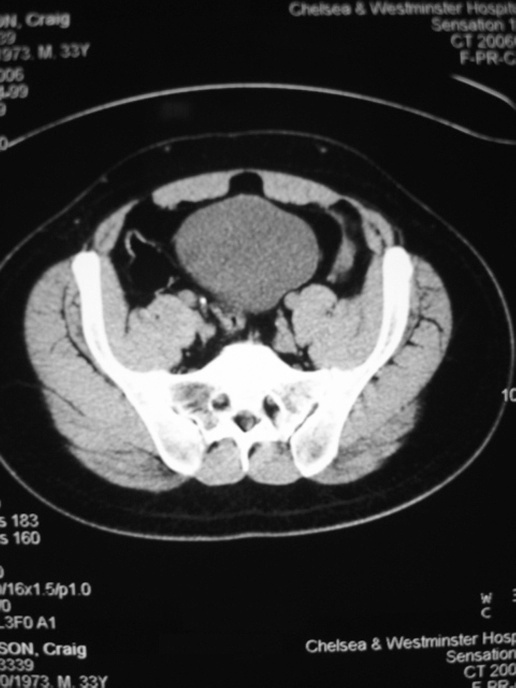 Vol 38, No 3, September 2013 Effect of Medium pH on Antibiotic Activity against Syrian Brucella spp. Isolates Ayman Al-Mariri, PhD; Mazen Safi, PhD Abstract Background: Brucellosis is an endemic zoonosis in Syria, affecting large numbers of animals. There are an increasing number of cases in humans. Brucella is a facultative intracellular