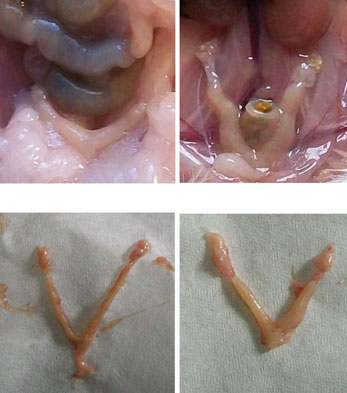 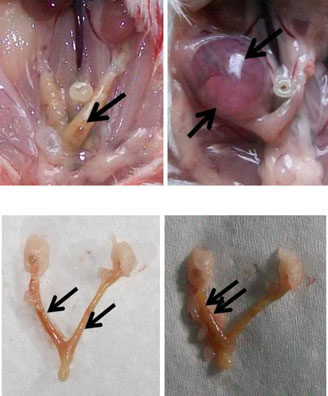 Appl Biochem Biotechnol (2013) 169:1727–1751 MW Exposed
Fig. 2 a Uterine horns of control mice in vivo (1 and 2) and in vitro (3 and 4) after giving birth to pups. bUterine horns of MW-exposed mice in vivo (5 and 6) and in vitro (7 and 8). Unlike the control, nopups were born in the exposed group of mice; however, some traces of implantation as a dark red spot(arrows) can be seen (5, 7, and 8) except in one mouse where only a single embryo (6) was found inunilateral uterine position significant increase in N/L ratio (p<0.01, Fig. was also observed in the irradiated groupof animals.
We have performed alkaline comet assay to illustrate that prolonged exposure to2.45 GHz microwave radiation caused DNA strand breaks in brain cells of mice.
Microwave-exposed mice showed a significant increase (p<0.001) in OTM (5.3±0.2),tail DNA (16.1 %) and tail length (26 μm) in the brain cells when compared to controlbrain cells (Fig. Total Nitrite and Nitrate Concentrations In the microwave-irradiated group of mice, a significant decrease in total nitrite and nitrateconcentrations was observed in plasma when compared to the control group of animals(p<0.05, Fig. This result indirectly shows that the level of NO in female micedecreased after microwave exposure.
Enzyme Immunoassay We observed an elevation in plasma P4 and E2 concentrations (Fig. , respectively) inthe microwave-irradiated group of mice as compared to the control group. However, asignificant increase was observed only in the E2 level of the microwave-exposed mice(p<0.05), but the increase in P4 concentration was not significant.
Appl Biochem Biotechnol (2013) 169:1727–1751 phocyte 2.5
Fig. 3 Changes in a hemoglobin (Hb) content, b red blood cell (RBC) counts, c white blood cell (WBC)counts, and d neutrophil/lymphocyte (N/L) ratio after 2.45 GHz microwave irradiation in mice. Results areexpressed as mean ± standard deviations (n=12). Significant difference was determined by using Student'st test. **p<0.01 and ***p<0.001, significant difference from thr control group Total ROS was measured with a DCFH-DA probe to assess the overall oxidative status in liver,kidney and ovary homogenates. An elevated ROS level was observed in the microwave-exposedgroup of mice as compared to control (Fig. ). The microwave-irradiated group showed a significantincrease in fluorescence intensity of the liver (p<0.001), kidney (p<0.01), and ovary (p<0.01).
Antioxidant Enzyme Activity We have checked whether the nonthermal microwave exposure-induced oxidative stressalters the activity of ROS-scavenging enzymes: SOD, CAT and GPx. Antioxidant enzymeactivities were determined biochemically (spectrophotometrically) as well as by performingnative gel of the liver, kidney and ovary. The results are shown in Table and in Fig.
Superoxide Dismutase Activity In the exposed group of mice, we observed a significant decrease in the SOD activities of theliver, kidney and ovary as compared to the control (Table , Fig. b(a)). SOD activitywas found to be highly decreased in the liver (p<0.001) of irradiated mice than the kidney(p<0.01) and ovary (p<0.01).