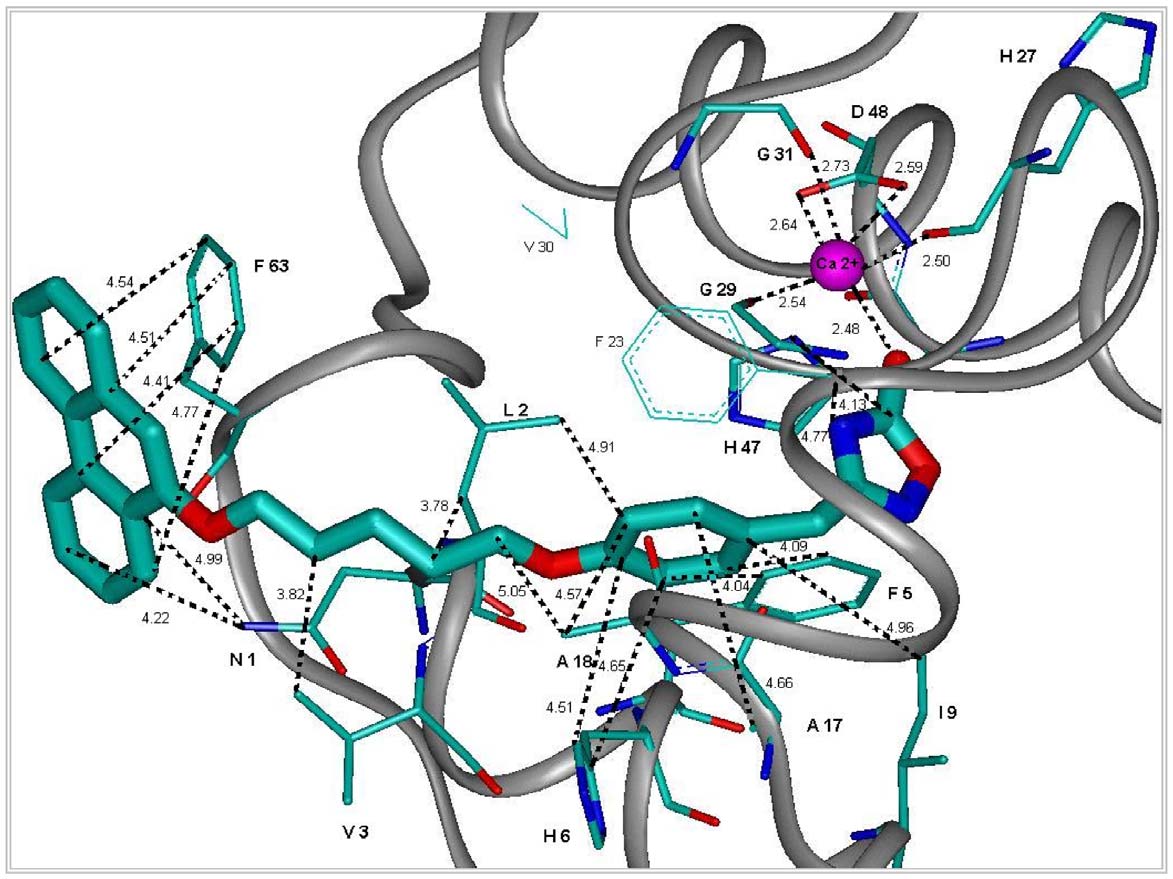 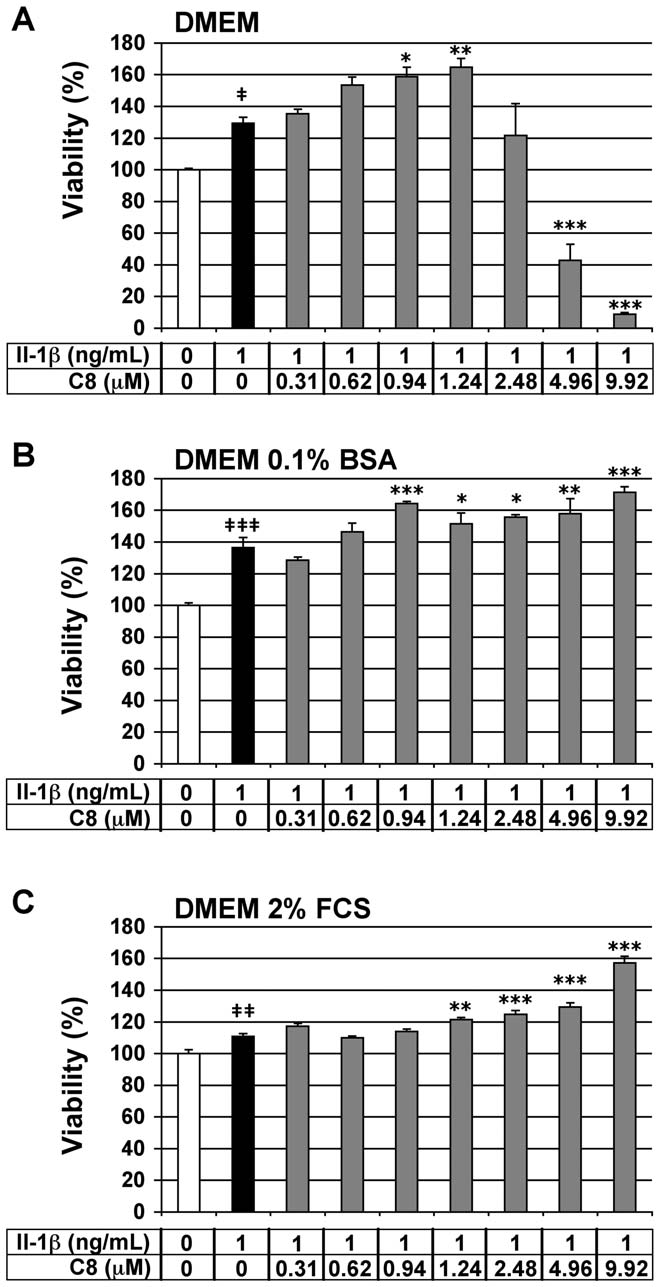 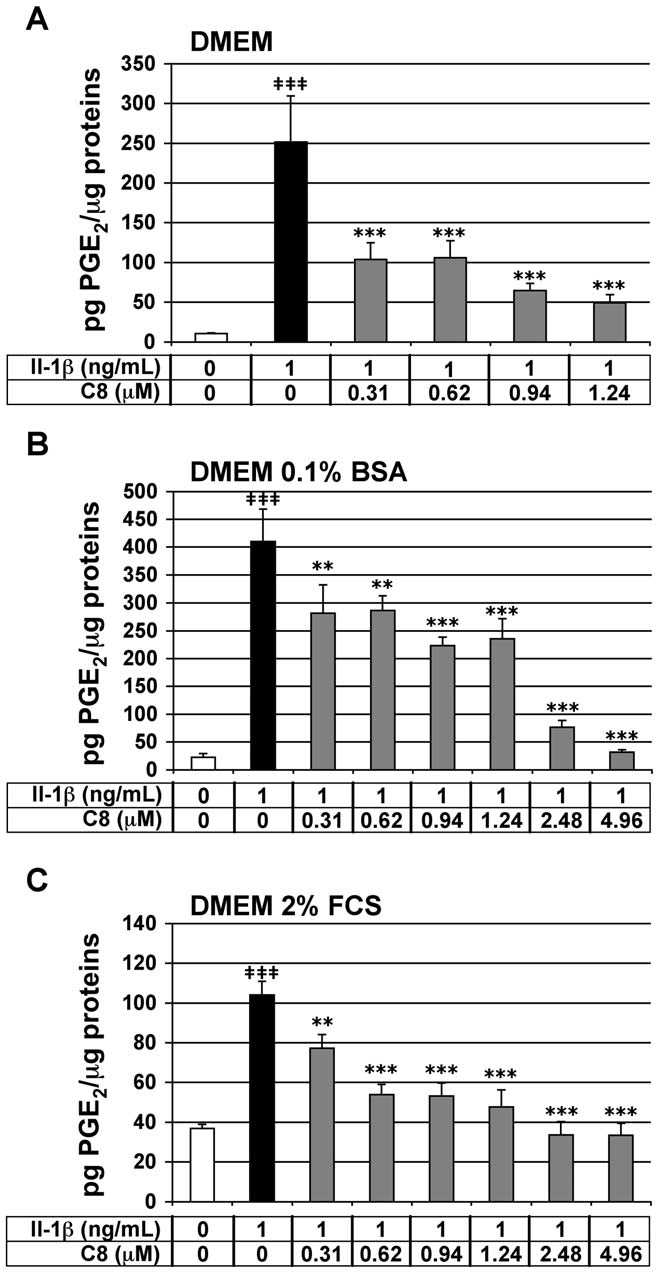 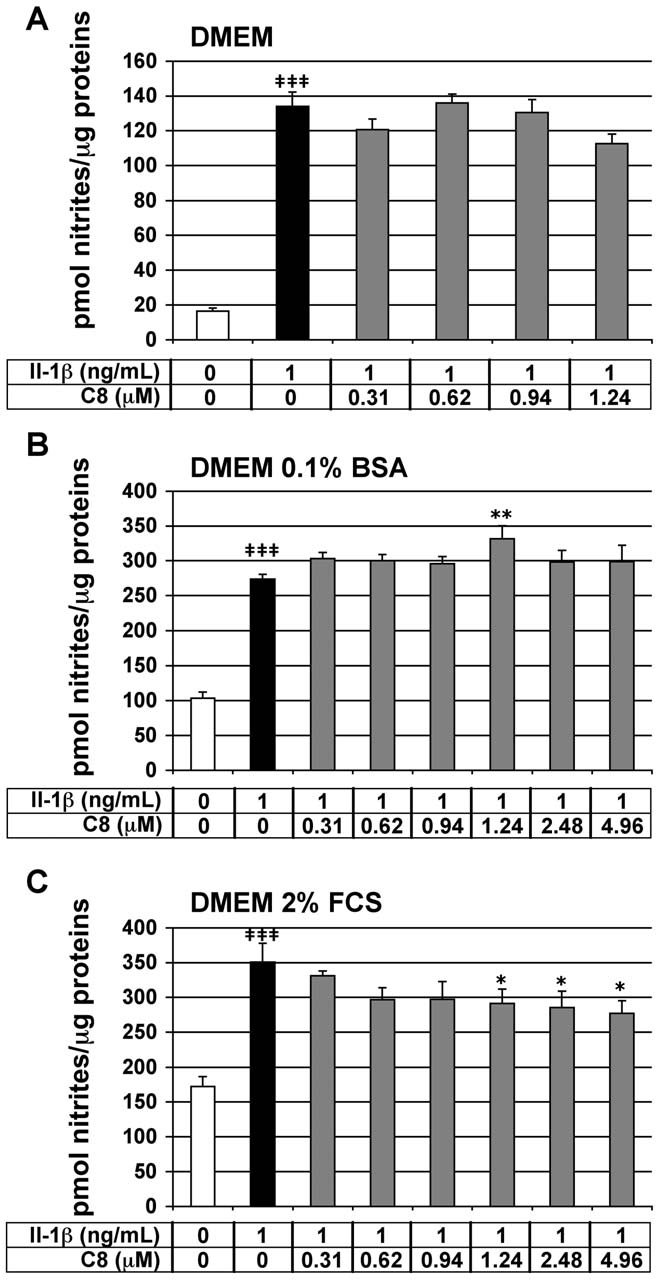 PLA2 Inhibitors in Chondrocyte Table 3. Effect of C8 on PGE2 secretion by articularchondrocytes incubated with different IL-1b concentrations.
C8 inhibitory effect (%inhibition) Chondrocytes were untreated or treated for 20 h with IL-1b (1-, 0.5-, or 0.25-ng/mL) alone or 1 h after the addition of C8 (0.31- or 4.96-mM) in DMEM with 2%FCS. PGE2 concentration was determined in conditioned culture medium, andprotein concentration was determined in whole-cell protein extracts. The PGE2concentration was normalized relatively to whole cell protein concentration (pgPGE2/mg proteins). The means of PGE2 concentrations from 3 independentdeterminations were calculated and the anti-IL-1b inhibitory effect of C8 wasdetermined with the formula %inhibition = 10021006[(mean PGE2 in IL-1b+C8condition)/(mean PGE2 in IL-1b condition)]).
*P,0.05,***P,0.001 between IL-1b- and IL-1b+C8-treated groups.
doi:10.1371/journal.pone.0010914.t003 significantly stimulated nitrite secretion by chondrocytes in thethree different culture media: 8.1-, 2.6-, and 2.0-fold induction ascompared with the control conditions, in DMEM medium aloneor supplemented with 0.1% BSA or 2% FCS, respectively (Fig. 5).
C8 did not significantly inhibit the IL-1b-stimulated nitritesecretion in chondrocytes cultured in DMEM medium alone orsupplemented with 0.1% BSA (Fig. 5A, B). In DMEMsupplemented with 2% FCS, C8 did not inhibit the IL-1b-stimulated nitrite secretion at 0.31-, 0.62-, and 0.94-mM andslightly decreased by 17-, 19-, 21-% the IL-1b-induced nitriteproduction at 1.24-, 2.48-, and 4.96-mM, respectively (Fig. 5C).
Thus, C8 did not inhibit the IL-1b-stimulated NO secretion inDMEM alone or supplemented with 0.1% BSA and slightlyinhibited IL-1b-stimulated NO secretion in DMEM supplementedwith 2% FCS.
Effect of C8 on COX-1, COX-2, and iNOS protein levels inarticular chondrocytes We evaluated the effect of C8 on COX-1, COX-2 and iNOS protein levels in chondrocytes treated with IL-1b. Chondrocyteswere treated for 20 h with IL-1b alone or 1 h after the addition ofC8 (0.31-1.24 mM) in DMEM, and protein extracts wereexamined by western blot analysis. As expected, COX-1 protein Figure 5. Effect of IL-1b and C8 on nitrite secretion by articular was detectable but COX-2 and iNOS proteins were undetectable chondrocytes. Chondrocytes were untreated (white bars) or treated in untreated control conditions (Fig. 6A). Moreover, IL-1b for 20 h with IL-1b alone (black bars) or 1 h after the addition of C8 treatment induced the expression of COX-2 and iNOS proteins (grey bars) in DMEM alone (A) or supplemented with 0.1% BSA (B) or 2% without affecting the level of COX-1 protein (Fig. 6A). In the FCS (C). NO secretion was indirectly evaluated by determination of presence of IL-1b, C8 did not alter the COX-1, COX-2 and nitrite concentration in conditioned culture medium. Protein concen-tration was determined in whole-cell protein extracts. Data represent iNOS protein levels (Fig. 6A). Consequently, the protein ratio of the ratio of nitrite concentrations relative to whole-cell protein COX-1 to COX-2 was not modified by C8 (Fig. 6B).
concentration (pmol nitrites/mg protein). Values are means 6 SEM(n = 4 to 7 independent determinations). { P,0.05, {{ P,0.01, {{{ P,0.001 between untreated and IL-1b-treated groups; * P,0.05,** P,0.01, *** P,0.001 between IL-1b- and IL-1b+C8-treated groups.
Nonsteroidal anti-inflammatory drugs (NSAIDs), which inhibit COX-1 and COX-2, and selective COX-2 inhibitors are currentlyused to reduce rheumatic symptoms. However, these drugs exhibit ranked energy balances for the binding of these inhibitors to gastrointestinal, renal, blood pressure and cardiovascular toxici- GIIAPLA2. The energy balances (Table 1) taking into account ties. To overcome this problem, GIIAPLA2 inhibitors could be solvation effects show a correlation between dE2, the overall developed to inhibit the production of COX substrates without energy balance for binding, and the experimentally measured IC50 impairing the balance between COX-1 and COX-2. We designed for our novel compounds C1-C8. This finding should lend and synthesized 7 new oxadiazolone derivatives (C2 to C8) additional credence to our previous results [20], despite the derived from C1. Using molecular modeling, we computed and approximations of the computational approach used in that study, PLoS ONE www.plosone.org June 2010 Volume 5 Issue 6 e10914 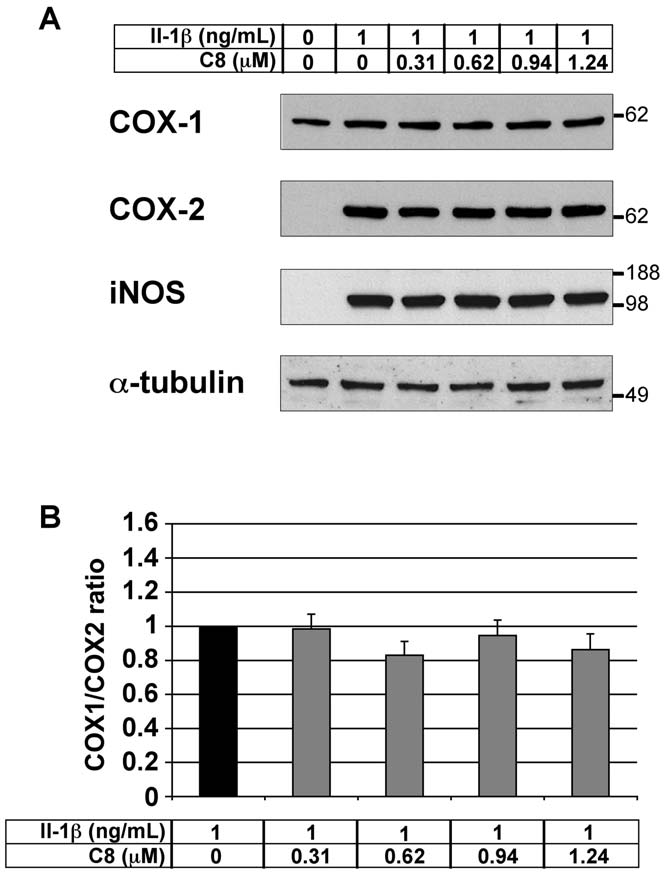 Chapter 10 Artificial Insemination in Poultry M.R. Bakst and J.S. Dymond Additional information is available at the end of the chapter Artificial insemination (AI) is the manual transfer of semen into the female's vagina. Basicallyit is a two step procedure: first, collecting semen from the male [1]; and second, inseminatingthe semen into the female [2]. In poultry, depending on the objectives and goals of the farm orlaboratory, there may be intervening steps such as semen dilution, storage, and evaluation.