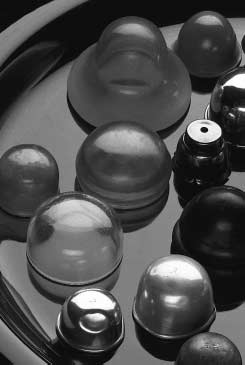 RISKS AND SIDE EFFECTS
MYTHS AND MISCONCEPTIONS
Use of the cervical cap may aggravate symptoms in women with 1. Cervical caps increase the risk of cervical dysplasia.
sexually transmitted infections and vaginitis. The risk of toxic Fact: Cervical caps are not associated with an increased risk shock syndrome is increased. Cervical caps may cause more of cervical cancer, although inflammatory changes have been vaginal odour and discharge than diaphragms, and can be dis- lodged during intercourse. Concerns about abnormal cervical 2. It is impossible to obtain a cervical cap in Canada.
cytology associated with cervical cap use have been shown to be Fact: Cervical caps are available in Canada in some family planning clinics and they can also be ordered through theInternet.1 Table 5. Fitting for a Contraceptive Cervical Cap
Most women will use the 28 mm cervical cap. The rim of the cervical cap should be seated in the vaginal fornices around theentire base of the cervix with a snug seal and no laxity.
Table 6. Instructions for Inserting a Cervical Cap
1. Wash your hands carefully before inserting or removing the 2. To make it easier to insert or remove the cap, stand with one leg supported higher than the other (using a chair or the edge Figure 3a. Inserting a cervical cap of the bath) or use a squatting position.
3. Remove the cap from its protective sachet.
4. It is recommended that the cap be used with a spermicidal gel or cream. Place a small amount of the spermiciderecommended by your health-care professional inside thedome.
5. No additional spermicide is required during the 72-hour wearing period.
6. Locate the cervix by inserting a finger inside your vagina.
7. Pinch the cap at its base with the dome facing downwards.
8. Introduce the cap into the vagina and push it toward the 9. When the bottom of the cap comes into contact with the cervix, position the cap so that it covers the cervix correctly.
10. When the cap cannot be pushed any further, you will know that it is placed correctly.
11. Now carefully remove your finger without disturbing the position of the cap.
Table 7. Instructions for Removing a Cervical Cap
1. The cap must not be removed until at least 6 hours after the most recent sexual intercourse.
2. Introduce the index finger into the vagina and find the cervix covered by the cap.
3. Run your finger around the base of the cap until you locate the 4. Hook the loop of the cap with the end of the index finger.
5. Remove the cap using a slow steady movement.
6. Remove the cap, wash it with warm soapy water and store the cap in a dark and cool place.
The cap may stay in place for a minimum of 6 hours after the last intercourse but no longer than 2 days. If an odour developsafter 6 hours, a break and a bath are recommended.
After cleaning and drying the device it can be used again asdescribed.
A woman with a very busy sex life who cannot wait should consider another method.
Figure 3b. Cervical caps The cervical cap can be reused until it is damaged.